The unofficial guide to The Sinking City features a complete set of information required for understanding the most important principles of the game and for beating it. A complete walkthrough is the most important part of the guide. It features the main cases that are related to the main plot of the game, and side cases that are optional. Solutions to specific cases feature locations in which you can unlock them, related locations, all investigation actions that must be completed, encounters with non-playable characters, rewards, and possible choices and consequences. The solutions are supplemented with high quality pictures and map of the city. Since the game lacks official mission markers, these can be very helpful in finding important items and new locations related to conducted investigations.

In our guide to The Sinking City you will also find a tour through the game. It features topics like traveling through the flooded city, fighting, using crafting, unlocking abilities, finding evidence, connecting clues in the mind palace. FAQ chapter, that features answers to most frequently asked questions, is an important part of the guide as well. In it, you will find information like how to use quick travel, how to save the game, what happens when the protagonist dies, can the protagonist swim, how to complete locations in 100% and should you use archives in game world.

Discovering new locations in Oakmont might be troublesome - world map atlas can be helpful with that. All most important locations related to main and side cases are marked in it. It also features quick travel points and monster nests that are optional locations. Our guide also features chapters focused on trophies, controls, and system requirements.

The Sinking City is a third-person perspective action-adventure game. The game takes place during the twenties' of the twentieth century, in the titular flooded city of Oakmont, Massachusetts. As detective Charles Reed, players are tasked with discovering the truth about the paranormal activities that take place in the city and about the horrible visions that haunt its citizens. The game is strongly inspired by the works of H.P. Lovecraft.

The FAQ chapter in our guide features answers to the most frequently asked questions. Some of the topics described there are:

Does the Sinking City features choices? 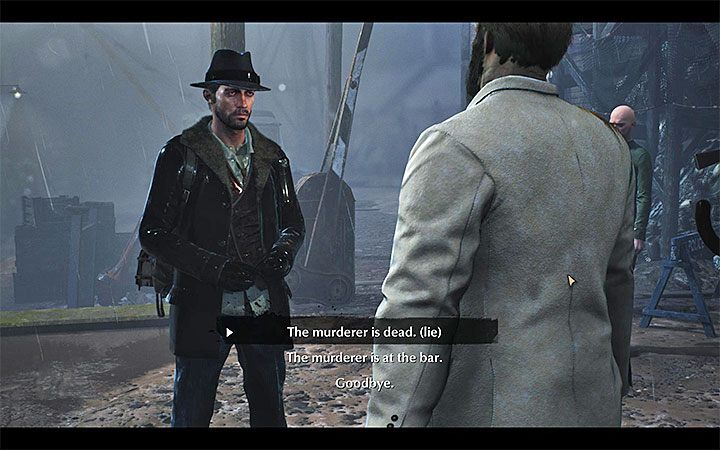 Yes, The Sinking City features choices. Each decision has some consequences. You can find about them immediately or they might be revealed later in the game.

An example choice is shown on the above picture. The game doesn't distinguish choices in any way from the standard dialogue options. If you want to secure yourself from making bad decisions, perform a manual save before starting conversation with every new important character. Choices and their consequences are described in our walkthrough.

How long does it take to complete The Sinking City?

The main storyline should take about 20 hours. This depends on which investigation difficulty level you play. On high difficulty, the game limits or completely eliminates some types of hints as to what further steps should be taken during an investigation. This can significantly increase the time spent with the game because this can slow down your progress in investigations.

It is worth noting that you don't need to complete the game multiple times to see different endings. They are all available regardless of the decisions made during your playthrough. The in-game choices don't branch out too much, and the main plot always has a similar course.

Completing all the side cases extend the game to about 30 hours. Usually, a single side case will take you around one hour. However, this time can be increased for those missions that involve finding and visiting more locations scattered throughout the city.

Can I kill NPCs? 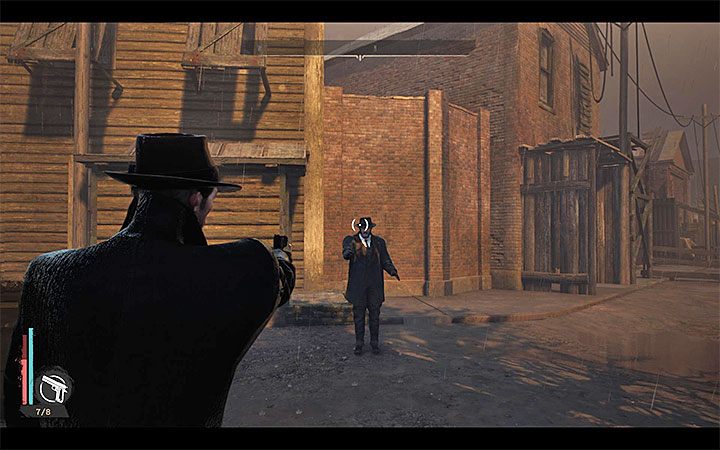 Yes, the game enables the players to kill non-playable characters. However, it doesn't lead to anything good. You can take the weapon from your inventory while traveling through safe areas where NPCs are located. When you aim at an NPC, he or she can also draw his weapon or he/she can start running away.

Killing NPCs greatly reduce mental health of the protagonist. If you kill more than one person in short amount of time, you can die due to a complete depletion of the blue mental health bar. Eliminated people don't leave any loot behind, which means that in addition to reducing your sanity you will also waste your ammunition.

You can't kill characters related to the investigations. Reed can't shoot them even if the aims at any of the key NPCs. Doing this doesn't have negative consequences that could fail an investigation.

Where to find the shotgun? 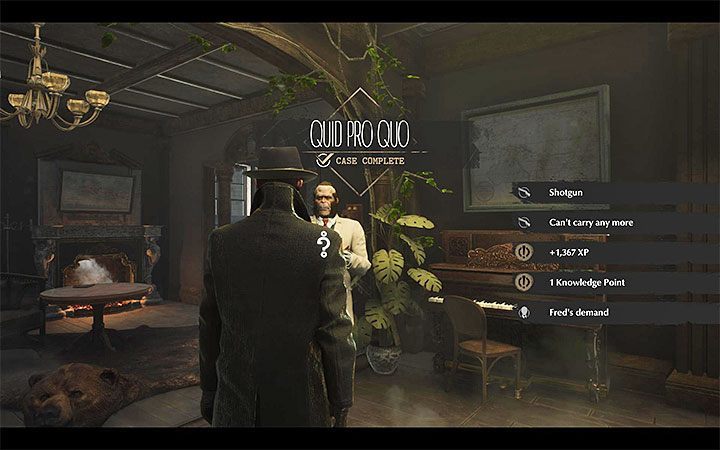 There aren't any locations in The Sinking City in which you can find a shotgun. This weapon is a reward for completing one of the main cases - Quid Pro Quo. You will receive it after talking to Fred on the Fish Market and giving the report to Robert Throgmorton in his estate.

Other weapons (and gadgets) are also rewards for completing selected main cases. We advise you to play a lot of them in the first hours of the game to get as many new items as possible. They will be useful during side cases and during the free exploration of Oakmont.

Why mission markers don't appear on the map? 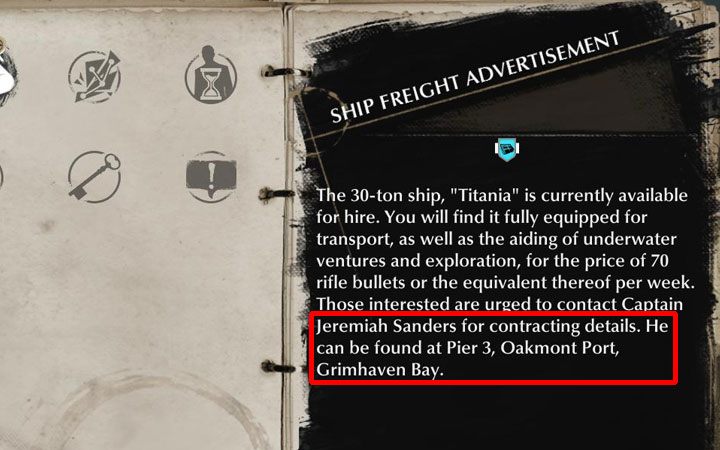 It was made on purpose. This is intended to increase immersion level of being a detective. Only most important locations are marked on Oakmont map by default - police station, local newspaper, port, hospital etc. The game won't mark places related to main or side cases automatically. Only after you find these places on your own, a magnifier icon will appear, enabling you to search these places.

Always analyze gathered clues - their description might feature information where you should go next. In the example in the above picture there was a hint about having to visit Pier 3 in Port located in the Grimhaven Bay district. Sadly, these clues aren't always so precise. For example, when tracking a wounded character you might need to determine that you should ask about her in the local hospital. All travel destinations are described in our walkthrough. Thanks to that, you won't have to wander aimlessly.

Why can't I take items from the chest? 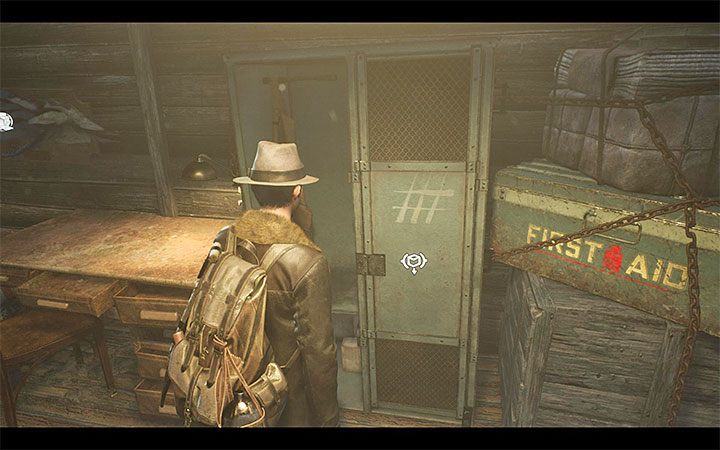 Examining an interactive container (chest, drawer etc.) can be troublesome at first because it isn't a very intuitive mechanism. Pressing a button isn't enough, you must hold it. Don't release the button until Reed finishes his action and takes all loot from the container (a list of drawn items will appear on the screen).

How to get off the boat? 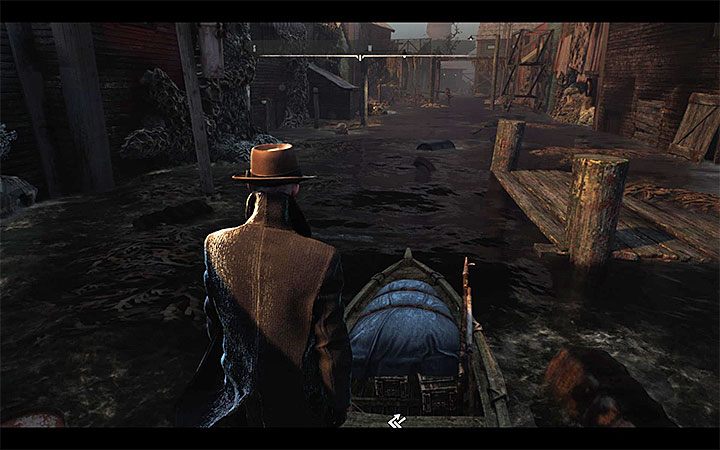 Boat trips are an important part of the game. By default, you can very easily leave the boat - when you reach a docking spot, an icon will appear. To leave the boat, press the interaction button (left mouse button on PC). You can also leave a boat whenever you want. You must press ESC (the PC version). Reed will get up, but he won't land in the water right away. This is a good method to visit areas where there is no place to dock the boat.

Will The Sinking City be available on Steam?

As for the time when this guide is published, there are no such plans. The PC version of the Sinking City is available exclusively on Epic Games Store. The exclusivity is timed for one year - it will end in July 2020. It is possible that then the game will appear in other shops, including Steam and GOG.

It is worth mentioning that The Sinking City is also available on PlayStation 4 and Xbox One. The game was released on consoles in the same day as on PC, in 27 July 2019.

Is it possible to continue the game after completing the main storyline?

No, The Sinking City doesn't have this option. Once you have finished the game, theoretically, you can select continue from the main menu, but then you will return to the final location where you have to choose the ending. You can't go back to Oakmont from here.

We recommend taking a look at the walkthrough for Into the Depths main case. We inform there about the point of no return, that is, the action which leads to the game's finale. You can create a manual save before making this decision. This will allow you to continue exploring Oakmont after you check all the endings.

Below you can see the most important controls in the Sinking City. Full list of controls can be found in the separate chapter titled Controls.

Does The Sinking City have high system requirements?

No, The Sinking City have rather low minimum system requirements. They are presented below:

In our walkthrough guide for The Sinking City, we used a variety of colors, through which it should be easier to find important information in the text:

In addition, in bold we have identified certain important actions or moments in which to make any decision.

About The Sinking City Guide

More About The Sinking City

He's waiting and dreaming. And so are we, for the various upcoming games focusing on or in the near vicinity of the Cthulhu mythos.