The following page describes the basics of combat in The Serpent Rogue. You will learn how to attack, both in close combat and from a distance, how to block and dodge.

In the game, you can attack almost anyone, excluding the key NPCs for the story. Therefore, at the beginning of the game, you will meet various types of skeletons and bone animals, but also people, all of whom you can attack. Some characters have allies of their own that follow and help them in battle. Killing just the "boss" is not enough - the other monsters will still be your enemies.

To fight, you will use either your fists, or whatever weapon or tool you can find. To do this, you have to assign them to numbers 1-4 and take such weapon or tool in your hand. Each tool and weapon has a certain durability - once they break down, you'll fight with your fists again. Press LMB to perform a basic attack. Each attack uses some renewable energy - the green food bar. By holding down the key, you will perform a slightly stronger attack, but it will also take a bit more of you stamina. 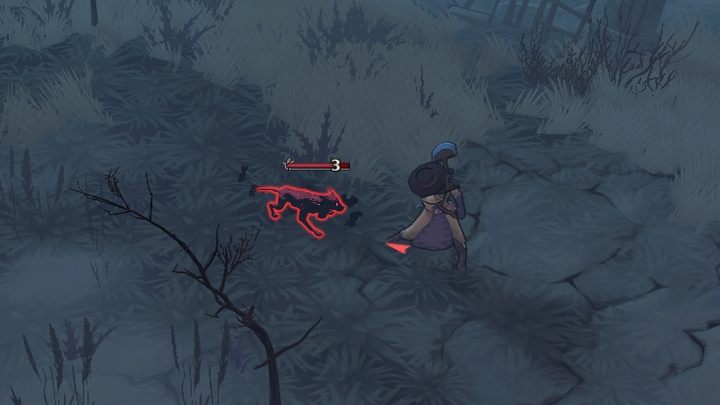 Using RMB you can target the enemy to counterattack more effectively; press E to change target. By attacking any non-story character, you will start a fight that you can't stop until someone dies. However, you can move away to a safe distance so that the enemy will stop chasing you. Enemies will not chase you outside of the location.

By using the Space key you can block hits - it is worth doing it especially during strong enemy attacks, which start with a swing and a blinking red marker. Of course, you can dodge by simply moving away from the enemy beyond the range of their attack, especially by sprinting - Shift. The blocks are 100% effective - you won't take any damage. However, your green bar (food / stamina) has to be long if you want to block successfully. The game does not have a perfect block mechanic, so you can hold down the block key all the time to deflect attacks. You can only block with weapons. 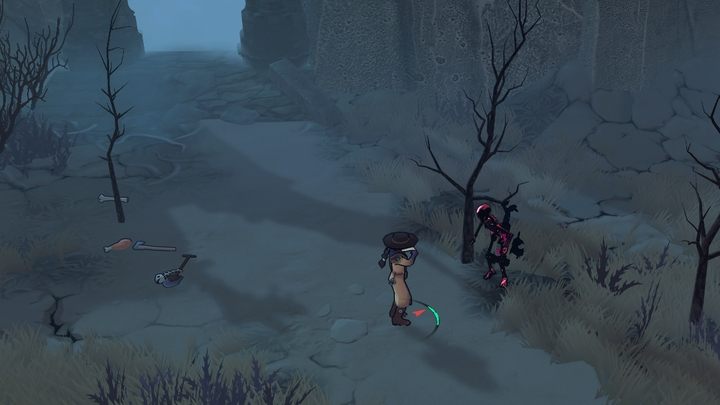 To make things more difficult, your defense can be broken. While holding the block key, you can see a white bar in front of the protagonist - it represents the durability of the weapon, which drops when you block. When a weapon's durability drops to zero, you will lose your balance. After that, you won't be able to block for a while. When you see the green bar, you cannot block (when you're not holding anything in your hands, or when the object doesn't allow for a successful block).

After transforming into an animal or monster, you won't be able to block because you can't wield weapons in this form. Then, the block button activates a special attack or other race skill.

You can throw any weapon by holding down the RMB button and throwing with LMB. This is a good solution in some situations, but make sure you're never defenseless - you won't do much damage with your fists and you won't be able to block. You can always pick up the weapon you've thrown. This type of attack deals the same amount of damage as the basic attack. 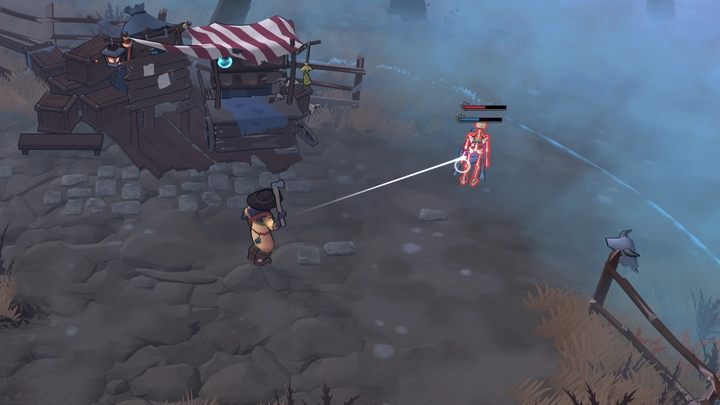 More often, you will also throw potions - those that reduce enemy HP (Damage) or others that apply negative statuses (debuffs) or e.g. transform the enemy.

Remember that some monsters have Immunity to some debuffs. Check the Bestiary beforehand, especially when facing stronger opponents. The Bestiary will also tell you how many HP the enemy has and how strong their attacks are - if you have checked them before. 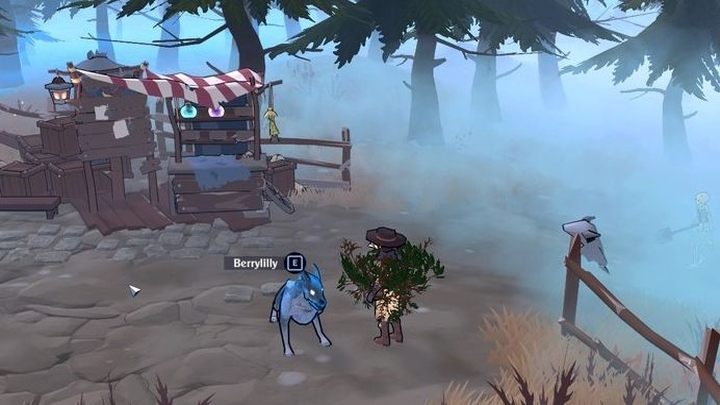 When using bushes, you can camouflage to sneak between the enemies unnoticed or to perform surprise attacks. Turning into a rat that can become invisible works similarly - unfortunately, this form has a very limited inventory capacity, and overloading causes significantly slows down your movement. You will lose camouflage by engaging in combat, collecting items and touching water. 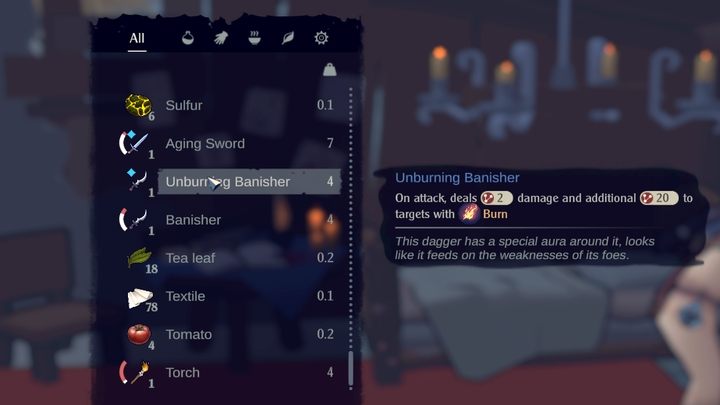 In The Serpent Rogue you can find unique weapons and upgrade the ordinary ones. This way, you can significantly change the combat and shift the power advantage. Try to adjust to the environment or carry different weapons/tools/potions with you and switch between them. For example: the weapon in the screenshot deals additional damage against enemies that are on fire. Use the torch first and switch to this weapon to deal increased damage. 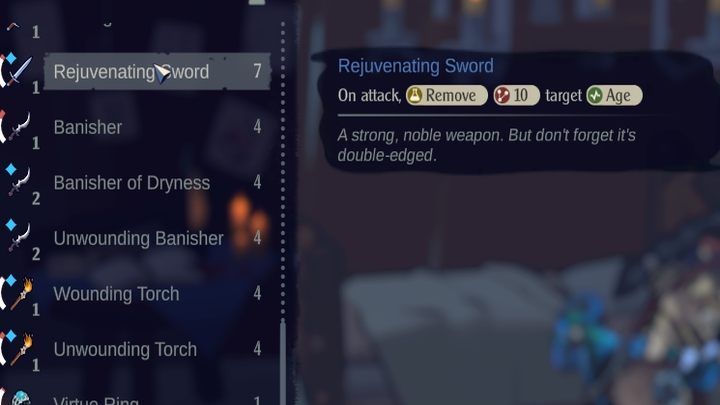 Other weapons, like the Broom, can influence the age of the victim. Most of the enemies in a younger form (information in the Bestiary will indicate the age for a specific form) become much weaker and lose a significant amount of HP. However, you cannot decrease the age indefinitely - the minimum value is 1. 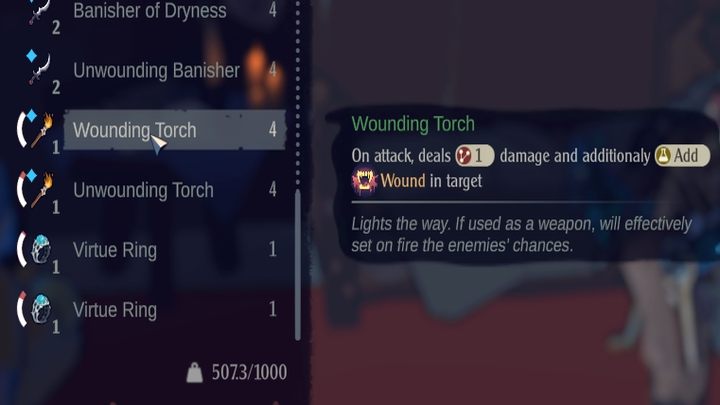 You will find many other weapons that, instead of dealing direct damage, can cause other harmful effects. Often it will be a hit-and-run fight, but at least you won't lose health. Check all weapons and items and analyze their combat use to use all possible options, or find your favorite strategy. You can read more about effects, resistances, and tricks to use against enemies on the Statuses and Debuffs page.