Welcome to Halcyon. The following guide for The Outer Worlds is a complete set of information about the latest production from Obsidian Entertainment. You will find basic information that will help you complete the game.

The guide begins with starting tips and a detailed description of all fundamental game mechanics. In this part of our guide to The Outer Worlds you will learn, among other things, how the character creation process looks like and know all the rules that govern character development. Also, there is a section dedicated to the companions you will recruit during your adventure. In this section of the guide you will find a description of most important mechanics used during the exploration of the in-game world, such as sneaking, combat, hacking and lockpicking.

The second part of the guide consists of an extensive FAQ section, which contains answers to the most important questions that may arise during the game. Here you will find advice on potential and typical problems which may occur during the gameplay, such as how to get ammo or obtain better weapons. With the help of this step-by-step guide you will learn about all mechanics related with equipment upgrades. In addition, we explain how the flaw system works, whether you can finish the game without killing anyone and how long it may take you to complete the title. If you're looking for a challenge, you can look at the How to Survive in Supernova Mode? section of our guide.

The next section of our guide to The Outer Worlds is a comprehensive walkthrough that will help you in completing all major story quests and side quests including the companion-related tasks. Also, we provide detailed maps of all locations available in the game.

The whole guide is concluded with an appendix, which contains chapters describing system requirements, controls and achievements (trophies) with guidelines on how to unlock them.

The Outer Worlds in a nutshell

The Outer Worlds is a first-person RPG set in the science fiction universe and was developed by Obsidian Entertainment. Among the people working on the game, were Leonard Boyarsky and Tim Kane, that is, the developers responsible for the first Fallout.

In The Outer Worlds, you play as a settler awakened from hibernation, who along with thousands of other people, traveled to a new colony in the Halcyon star system. It turns out that the ship we were on board drifted in space without control, and the main character stumbles upon the trail of a conspiracy involving large corporations.

In The Outer Worlds, the action is observed from the first-person perspective (FPP). The title is a typical RPG. During the adventure, you will explore the world, speak with NPCs and complete main and side quests.

The hero doesn't have to travel alone. You can experience adventures with companions controlled by artificial intelligence.

Color markings used in the manual

On what platforms will The Outer Worlds be released?

The Outer Worlds will debut on October 25 on PC, PlayStation 4 and Xbox One. In 2020, the game will be released on Nintendo Switch.

Will The Outer Worlds be on Steam?

The Outer Worlds is an Epic Games Store's timed exclusive. This means that the title will be available on Steam a year later.

It is also worth noting that the title, along with its premiere, was also added in the Xbox Game Pass subscription.

System requirements for The Outer Worlds

The following information will help you find out if your PC can handle retrofuturism. Minimum and recommended system requirements will answer the question - will I be able to run The Outer Worlds?

About The Outer Worlds Guide 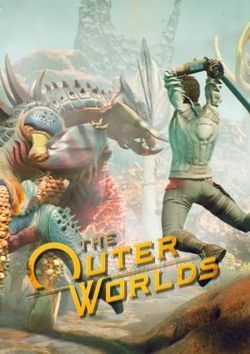 Action RPG game created by Obsidian Entertainment studio. The Outer Worlds takes us to the retrofuturistic universe, to be more precise, to the destructible Halcyon colony, which is the furthest point on earth.

The Outer Worlds is an action RPG game developed by Obsidian Entertainment studio. It's a team whose portfolio includes such productions as Star Wars: Knights of the Old Republic II - The Sith Lords, Fallout: New Vegas or the Pillars of Eternity series. The game was released by Private Division - under this brand Take-Two Interactive helps independent developers. It is worth noting that the title was supervised by Leonard Boyarsky and Tim Cain, the developers to whom we owe the creation of the first installment of the Fallout series.

The Outer Worlds takes place in a retro-futuristic universe. We play the role of a spacecraft crewman awakened from hibernation, who was sent to Halcyon, the Earth's colony located on the outskirts of the galaxy. As it soon turns out, the days of the institution may be counted - the protagonist encounters a trace of a conspiracy directed against it. How the fate of the colony will unfold and what role the hero will play in it depends on the player's actions and decisions, as well as his relations with characters and factions functioning in the game world.

In The Outer Worlds the action is shown FPP view. The main premise of the game are role-playing tasks and side missions, which the hero can perform alone or with companions controlled by artificial intelligence. These characters can join us in the course of the adventure, and they are equipped not only with their own stories and motivations (separate quests are associated with them), but also with individual skills. In order to get to know each of them better, it is worth to look on board the ship from time to time, where we can meet other crew members.

By traveling through various locations, where you can find both picturesque landscapes and interiors of buildings or space stations, we face various opponents - from hostile people, through combat robots, to monsters that are the fruit of a failed terraformation process. In real-time battles, you use arsenal and weaponry with a skillful juggling of the heroes abilities.

As the protagonist progresses, he or she gains experience and advances to the next level, gradually expanding the range of skills (which can be useful both on the battlefield and during conversations with the NPCs). Against the background of other representatives of the species, The Outer Worlds distinguishes the system of so-called flaws - the game follows our actions, trying to find an activity in which we are not particularly good. Then it offers us a related debuff; if we accept it, we will get an extra perk in return.

Thanks to the original, retrofuturistic stylistics, the visual side of The Outer Worlds make it pretty neat. Carefully designed locations draw attention, as well as detailed models of characters, enemies and armament. The struggle takes place with the accompaniment of atmospheric soundtrack.