On this page of our guide to The Last of Us 2 you can find a description of various easter eggs, pop culture references and curiosities that appear during Ellie stages. These are not things or items that affect the main progress of the story campaign, but finding them can still be a lot of fun.

You won't find any large spoilers here. In our list we didn't include all possible curiosities, easter eggs or references to other productions. There are a lot of such elements in TLoU 2. Also, considering some easter-eggs as collectibles may be a subjective matter. 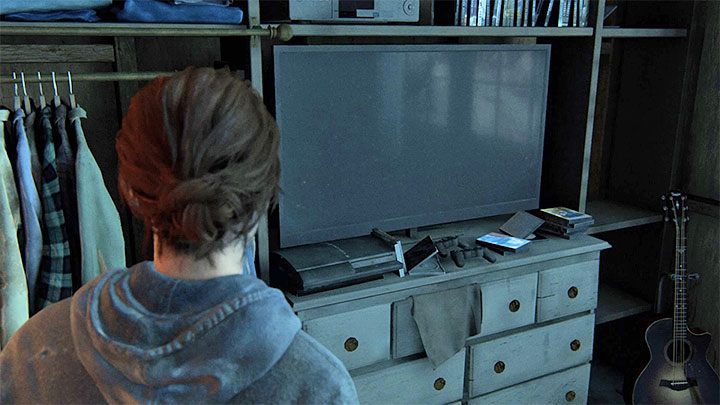 PlayStation 3 consoles can be found in many places as you play through the story campaign of the game. The first location where a PS3 is located is Ellie's room in Jackson during the Waking Up stage. You can get to this location just after completing the prologue of the story campaign. 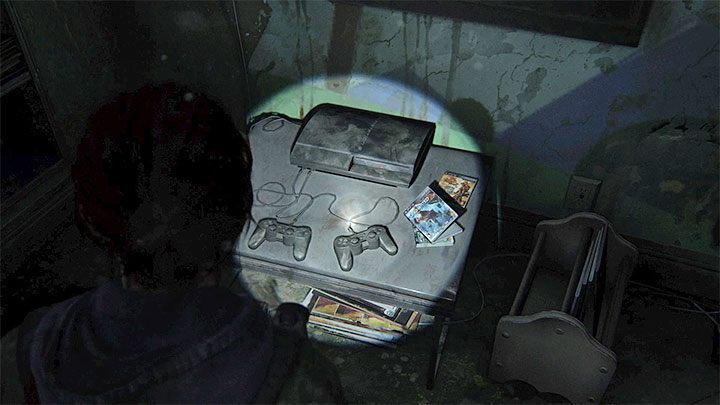 In addition to PlayStation 3, you can also find Dualshock pads and other games developed by Naughty Dog - Uncharted 2: Among Thieves and Jak and Daxter HD Collection. It is worth noting that these games were released by Sony just before the outbreak which occurred in the game world. 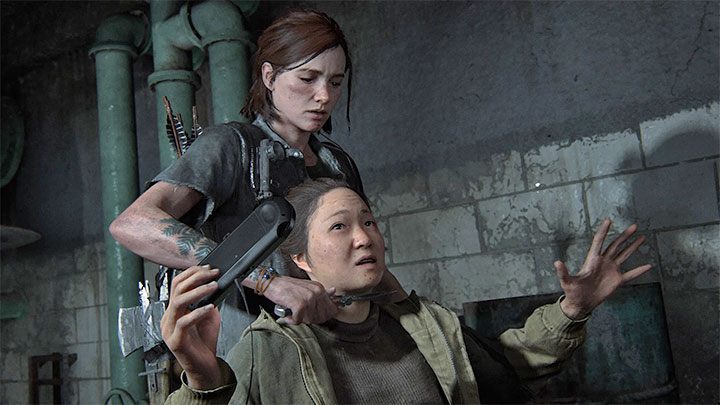 One of the major and most frequently appearing easter egg of The Last of Us Part 2 is the PlayStation Vita portable console. Handheld appears for the first time during The Seraphites stage. One of the women belonging to the WLF faction will be playing on the handeld. Ellie will interrogate her during the cut-scene. 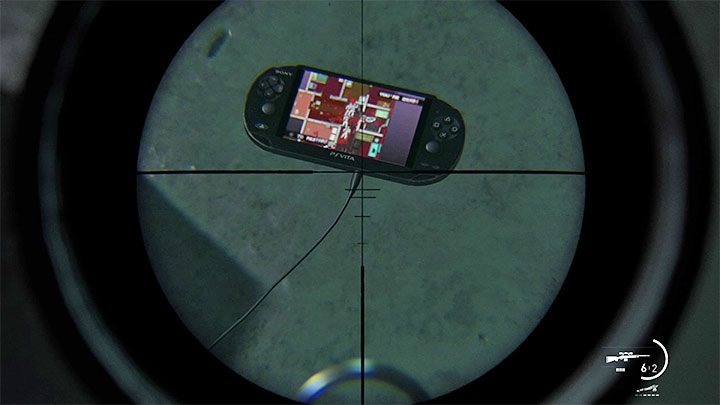 After the cutscene, the PS Vita will be lying on the ground. After you zoom in the camera, you will notice that the woman you met was playing the Hotline Miami video game. An additional curiosity is that, as in the case of the aforementioned games on PS3, Hotline Miami in the real world appeared on Vita just before the date of the outbreak in the game world. 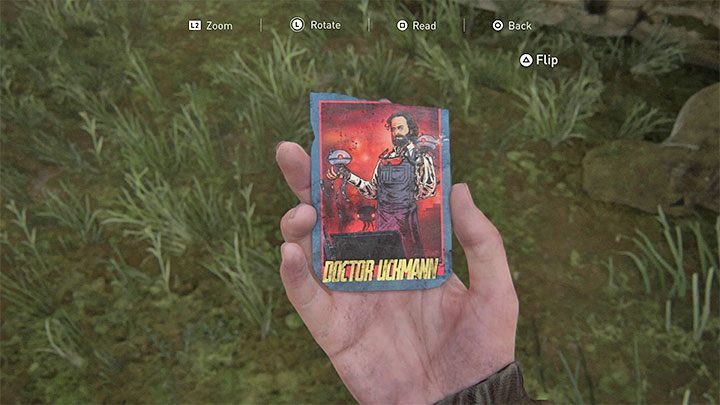 Neil Druckmann, the lead director of The Last of Us: Part II, appears in the game under rather unusual circumstances. In fact, he was depicted on one of the trading cards as Doctor Uckmann. As a reminder, trading cards are one of the collectibles / secrets available in TLoU 2 and this particular one can be found in small ruins during the Downtown stage. 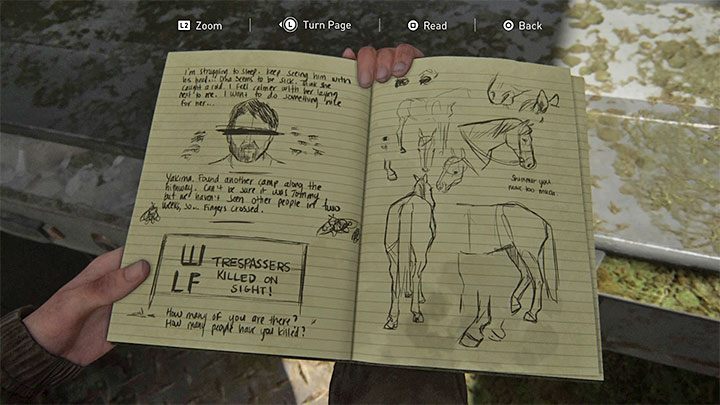 Shimmer is the name of a horse belonging to Ellie. She rides her mount during many initial stages of the story campaign. A very funny journal entry is associated with Ellie's mount. In the Downtown stage, near the music store and synagogue, you can find a place to add a journal entry about the heroine's horse. Ellie will comment in a funny way that she has trouble drawing a horse because Shimmer is still moving and not standing still. 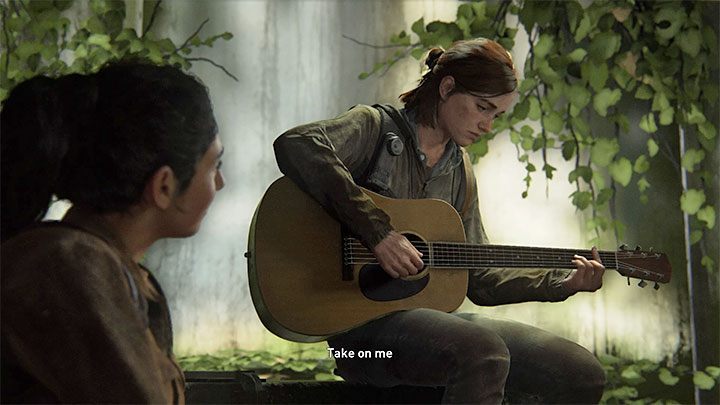 The ability to play the guitar is one of the greatest curiosities of The Last of Us 2 and we have devoted a separate page of our guide about this topic - Playing the guitar. You can, among others, play various songs on the guitar freely in a specially prepared mini-game.

In our opinion, the most interesting aspect related to playing the guitar can be discovered in the Downtown stage. You can visit the Valiant Music Shop while you're there. Ellie will play and sing a real song of A-ha - Take On Me after she finds a guitar in it. 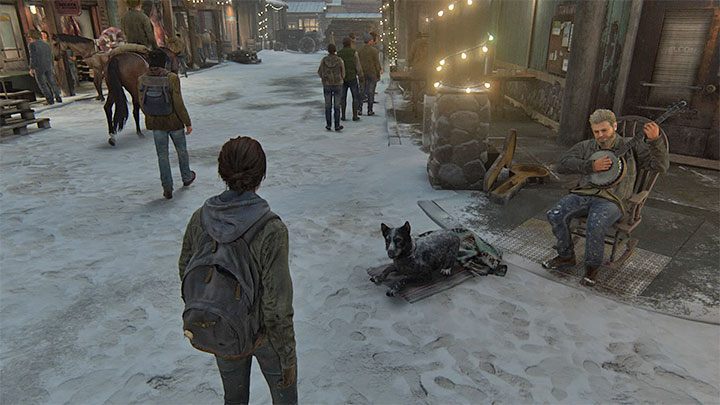 Another interesting easter egg is also associated with music. Gustavo Santaolalla, the main composer of music for both parts of the series, appears in the game world. You can find him in the Waking Up stage, which is at the very beginning of the game. A man looking like Gustavo will play the instrument in the central part of Jackson, specifically where Ellie can also greet one of the dogs. 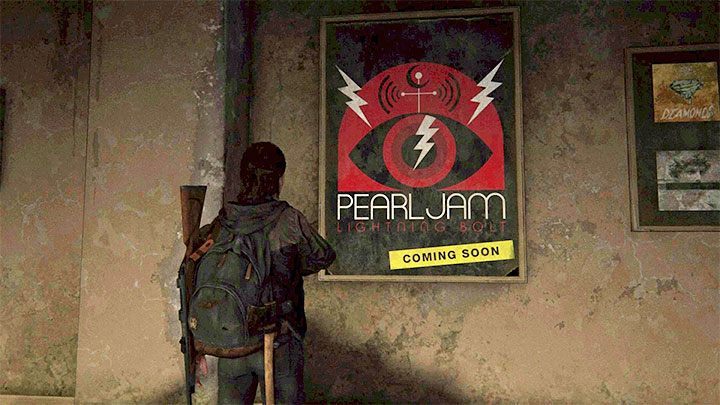 Another musical easter egg concerns the popular band Pearl Jam. The Lightning Bolt album in the real world was released three weeks after the outbreak in the game. During your visit in the Valiant Music Shop in the Downtown stage you can find a poster informing about the planned release of this album. 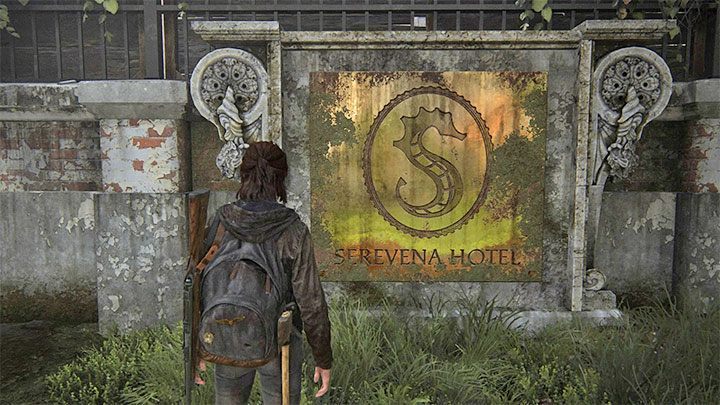 Rather minor easter egg is associated with the Serevena Hotel, which Ellie and Dina visit at the end of the Downtown stage. Not long after you leave the hotel building, you come across a sign with a logo on it. Although the hotel's logo is a sea horse, it is very similar to the popular logo with a dragon known from the Mortal Kombat series.

Room 217 from The Shining 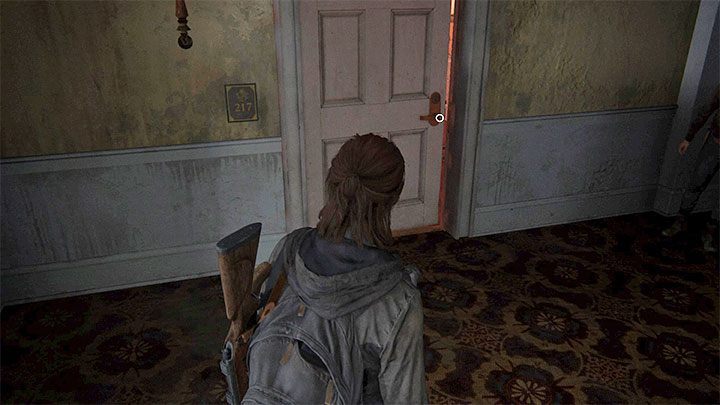 The Serevena Hotel mentioned above also hides another less striking easter egg. As part of the hotel exploration, you have to visit the room 217. It is a reference to Stephen King's novel The Shining, in which room 217 was just one of the most important elements of the plot. Similarities can be found in the red coloring of this room, which suggests a reference to the famous book of the master of horror. 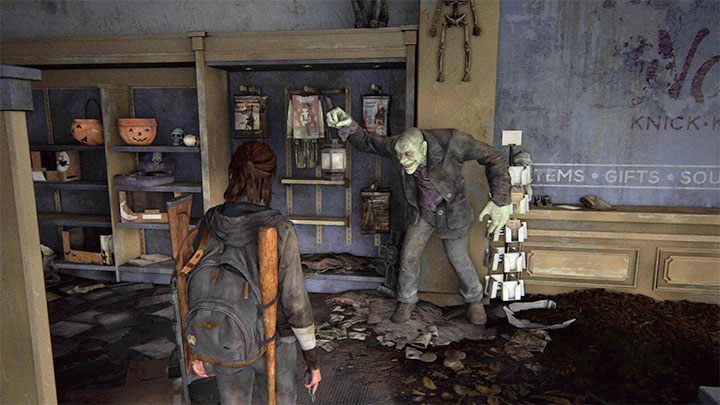 The virus which destroyed the world of The Last of Us began to spread at the end of September 2013 and it's no coincidence that many shops are decorated for the Halloween celebration which occurs on October 31st. The shops were preparing to celebrate this holiday, although of course, due to the outbreak of the epidemic it never happened. 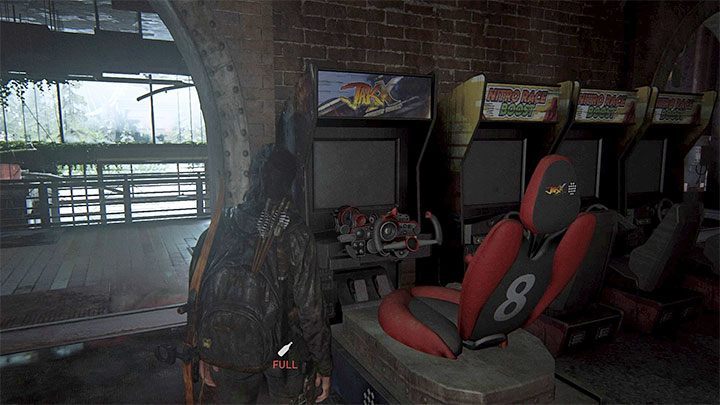 During The Flooded City stage, Ellie visits the Arcade. It features lots of gaming slot machines which are based on entirely fictional franchises. The exception is a slot machine with a racing game - Jak X: Combat Racing. This is a real video game, which was released on PlayStation 2 and PlayStation 4 in the real world. 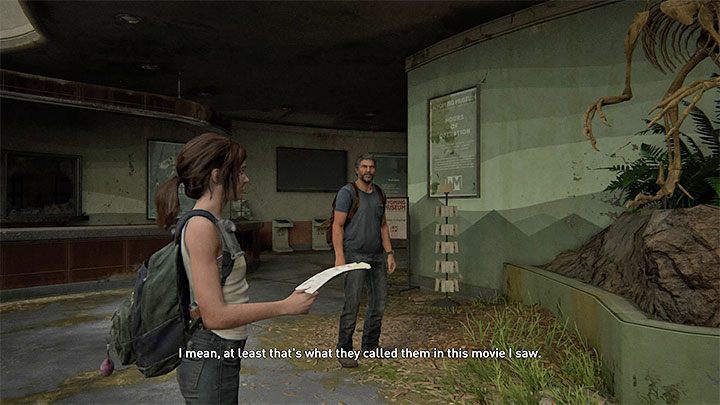 One of the most interesting moments of the game is a visit to the museum as part of The Birthday Gift stage. This stage is one of the flashbacks from the past. In this stage, Joel and Ellie arrive to the museum, which contains a very extensive exhibition of dinosaurs. During this visit, Joel will refer to Jurassic Park many times. Also, he will try to familiarize Ellie with the movies of this series. However, the title of the film itself, probably due to copyright restrictions, is not mentioned by Joel even a single time. 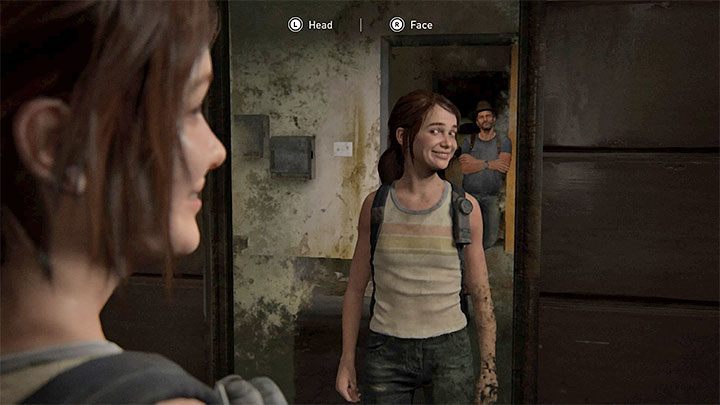 In the The Birthday Gift stage mentioned above you can also come across a big mirror and interact with it. You can do some fooling around as Ellie by using the controls - the left analog knob is used to turn her head and the right one to make various grimaces. 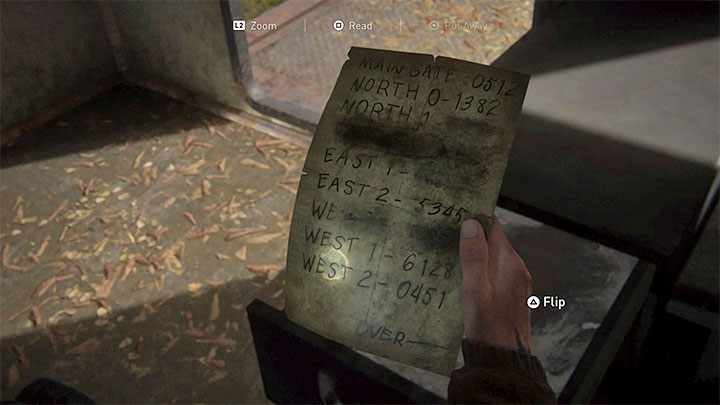 The famous combination 0451 also appears in The Last of Us Part 2. Ellie will find out about it by finding the code list note during The Gate stage. 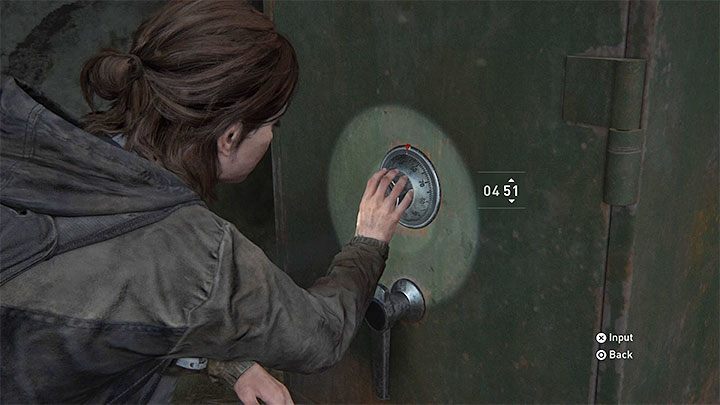 Unfortunately, the Code 0451 cannot be used on the first keyboard available in the game world. You have to wait until you get to the Downtown stage if you want to use this code. It is used to open one of the safes located at the station at the western end of the map. 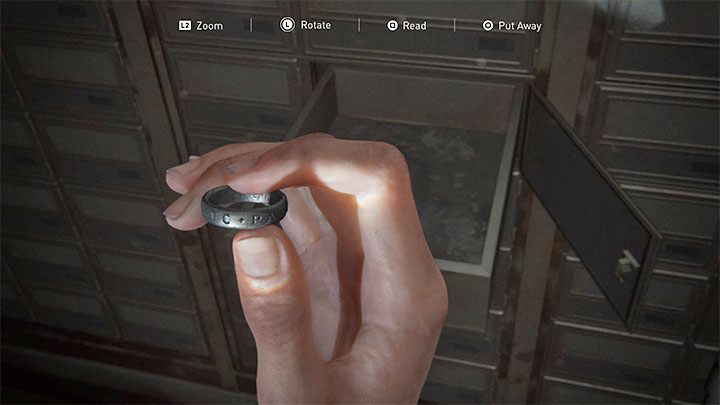 In The Last of Us Part 2 you can find a ring that belongs to Nathan Drake known from the Uncharted series. The opportunity to do this occurs in the Downtown stage, in which Dina and Ellie have to examine the optional bank building and break into its vault. The ring will be in one of the bank lockers. The So Great and Small trophy is associated with this secret. We have discussed it in detail in our trophy guide. 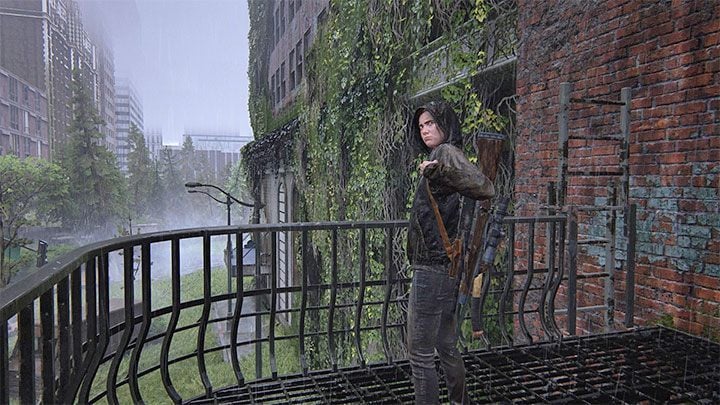 After you get to The Theater stage during your first day in Seattle you will experience some heavy rain. Ellie will dislike the weather too. After you leave the building for a while to solve one of the puzzles, Ellie will put on a hood to protect herself from the rain. The heroine will take off the hood again after you return to the building. 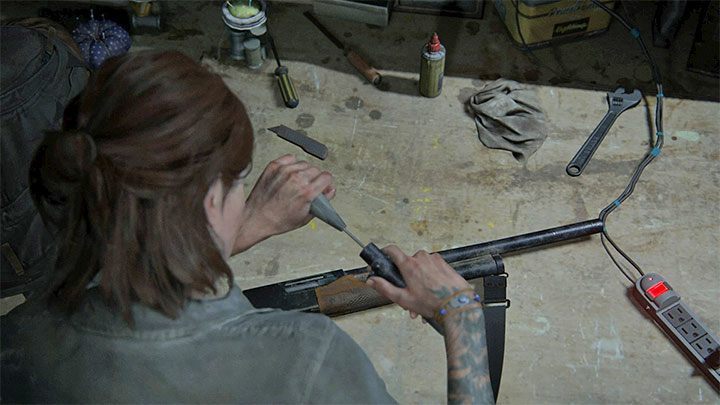 Improving firearms in The Last of Us 2 can be a pretty interesting visual treat. To buy upgrades you have to use the scrap collected in the game world. This is not entirely realistic, but the process of crafting weapon upgrades at the workbench has been shown quite accurately. For example, you can watch how the heroine installs a scope on her weapon, cleans the weapon's barrel or prepares space for additional bullets. 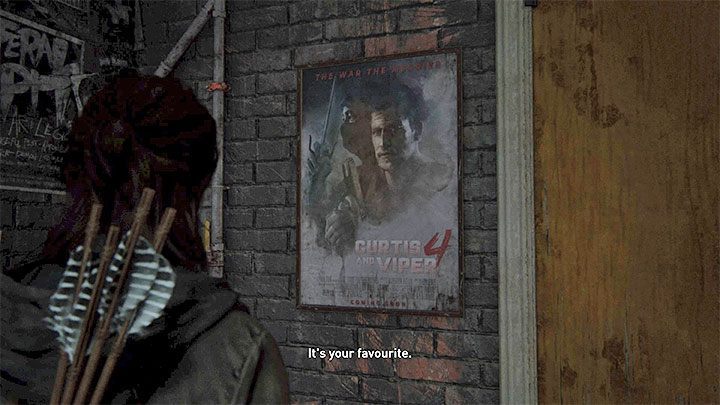 During her adventures, Ellie comes across a poster of the Curtis and Viper 4 movie. The protagonist notes that this is Joel's favorite series of (fictional) action films, and it is a knowledge carried over from the first part of The Last of Us. 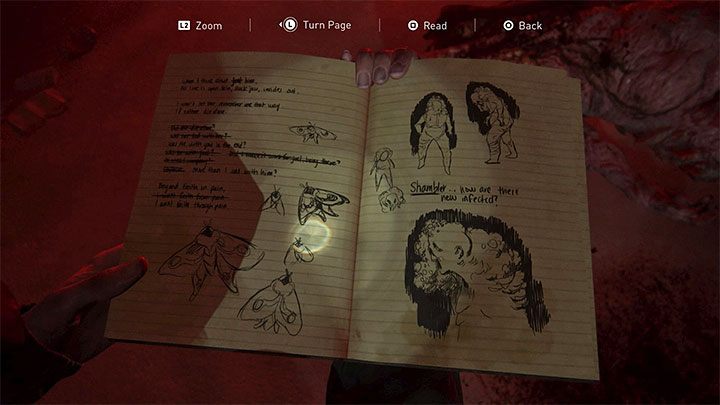 Shambler is the main new species of infected in the The Last of Us 2. You will encounter this brand new enemy for the very first time during The Tunnels level. The interesting thing is that the name of the shambler was not given to this monster by Ellie, but by one of the WLF soldiers killed in battle by this creature. After your first encounter with Shambler, you can approach his corpse and make a journal entry about this monster. 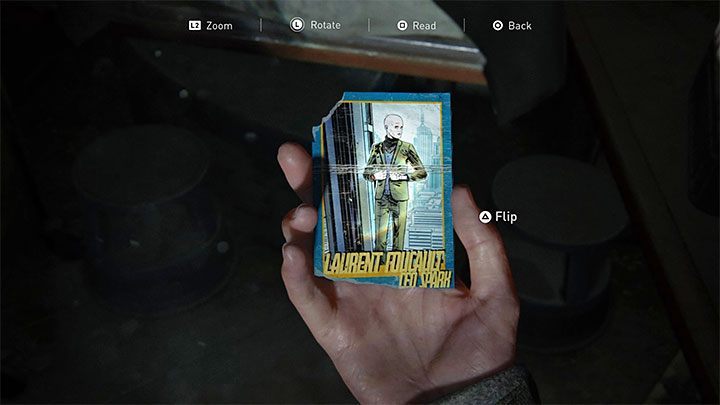 In the Patrol stage Ellie may come across a trading card (collectible) of Laurent Foucault, CEO Spark. This find is an easter egg, namely a reference to Michel Foucault's real character. He was a French sociologist, philosopher and historian who was living in 1926-1984. Michel Foucault's research concerned social institutions. They have been repeatedly recognized for their innovative approach. However, they were also sporadically described as quite controversial. Laurent Foucualt available on a trading card in the game is a character with a huge intellect, who has become a billionaire and built a SPARK corporation specializing in scientific research.