This page of spoiler-free The Last of Us 2 guide contains a list of all secrets found during Road to the Aquarium - a level that is a part of Seattle, Day 3 chapter. During the level in question we take control of Ellie. During this mission, don't forget to look into all the buildings and rooms you pass by, as there are secrets and various loot in many of them.

During Road to the Aquarium, you can find 10 secrets: 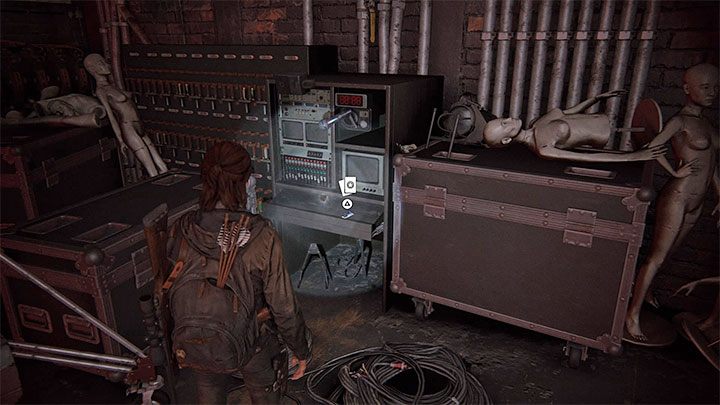 It's a collector's trading card - a collectible. You can get it at the start of the level, i.e. when you are still behind the stage in the theatre. It is hidden next to the machines that control the stage. Find the secret before you part the curtain and walk off the stage. 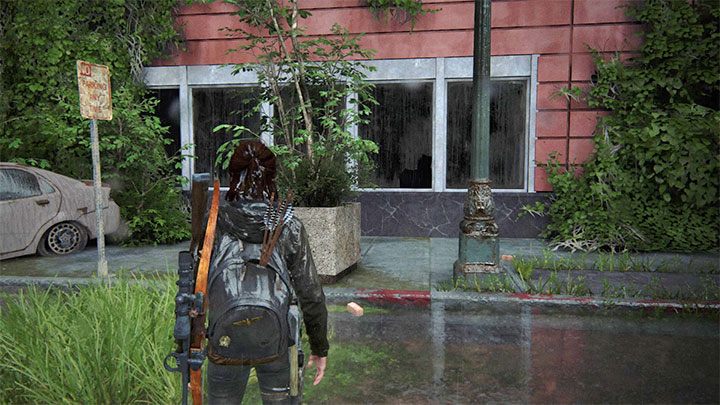 The Workbench during Road to the Aquarium level can be found shortly after Ellie and Jesse leave the theatre building and begin their journey towards the aquarium. Along the way, the characters move through the red building shown in the screenshot and must enter through one of the shutters. 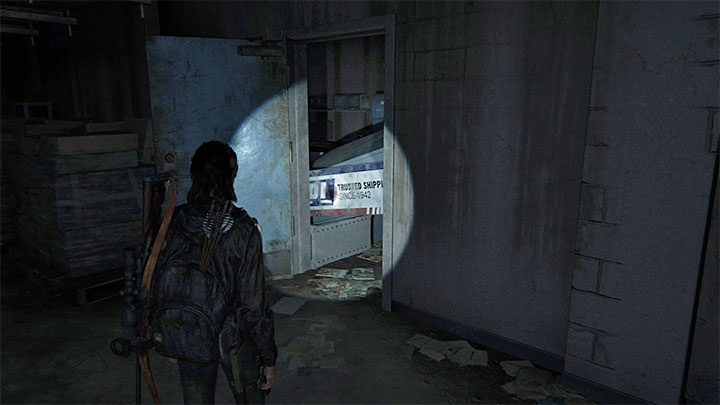 Go through more unlit spaces until you reach the partially collapsed passage in the image above. Ellie needs to crawl here. 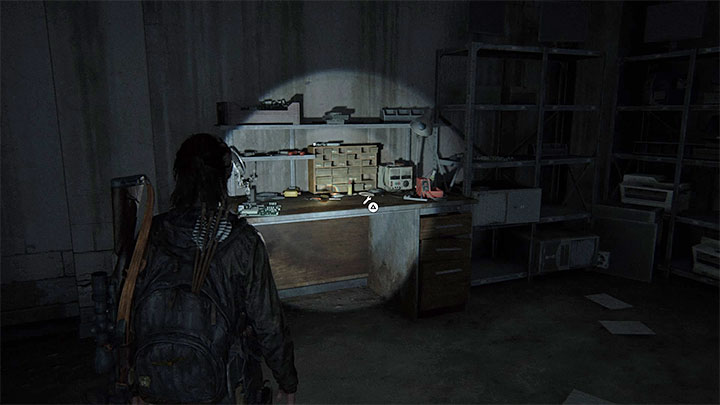 The workbench is in an adjacent room. 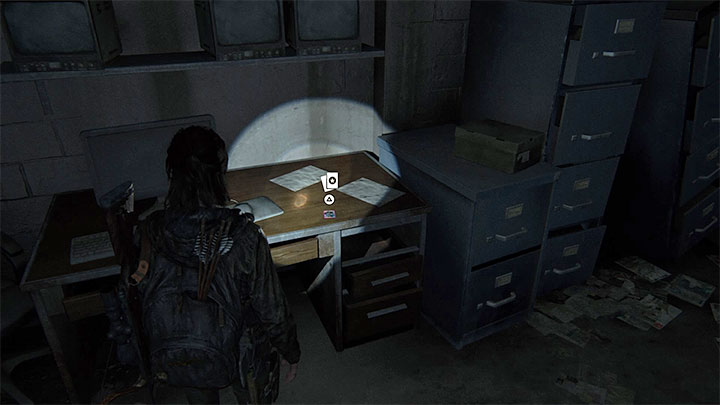 It's a collector's trading card - a collectible. It is in the same dark room where the workbench described above was found. The card is on the desk. 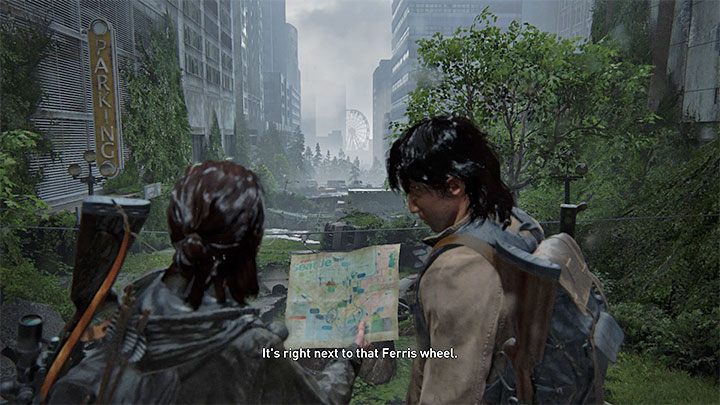 It's an artifact. In order to obtain the secret, Ellie and Jesse must first reach the area shown in the image above. There is a small river which is surrounded on both sides by places where one can travel dry-shod. 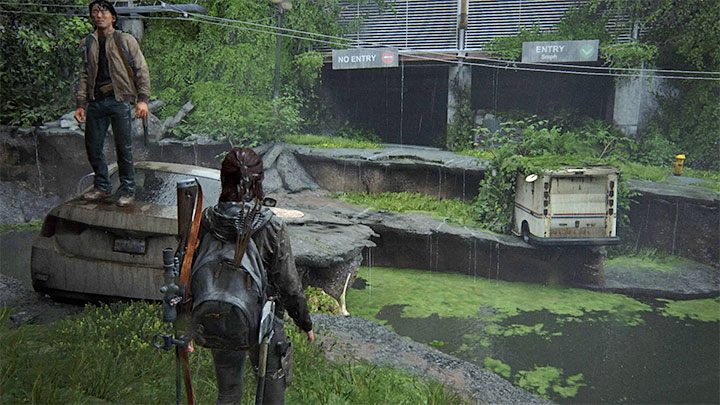 Take an interest in the underground garage located on the left. Enter this unlit location. 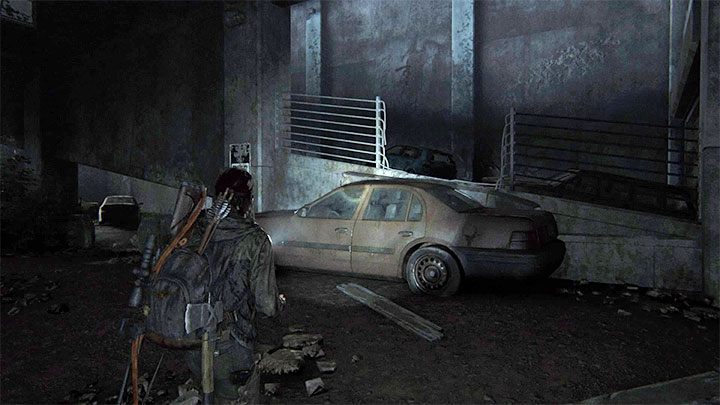 Your job is to get to the bodies on the upper level of the garage. Go to the opposite end of it and find a place to climb the wreckage of the vehicle. 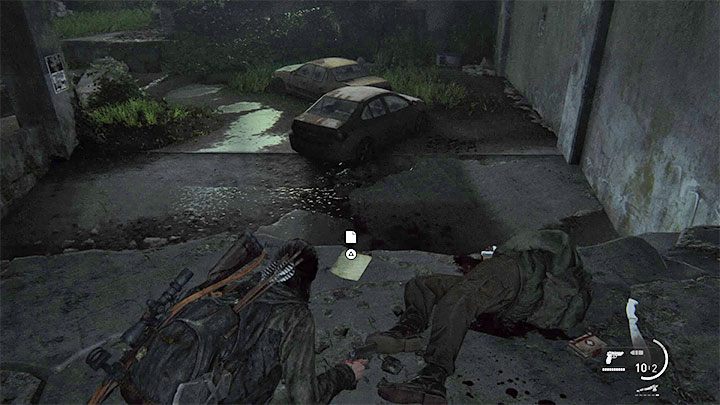 Go up the ramp, but watch out for the stalker attacks - it's best to attack these monsters at a distance using a rifle or a pistol. After the fight, find the letter next to the man's corpse. 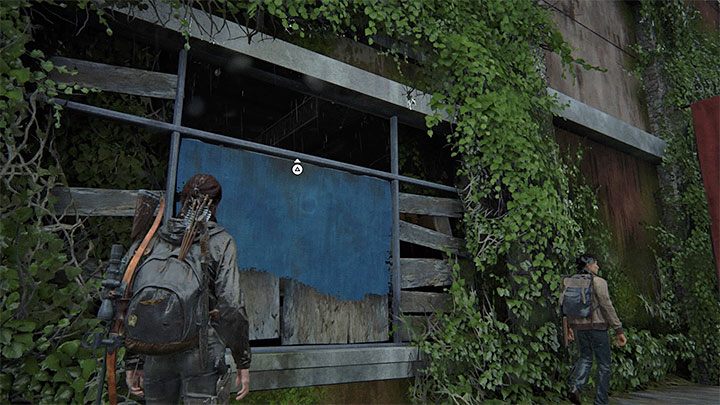 You can unlock this secret during Road to the Aquarium level once you reach a large bookstore. Ellie and Jesse are able to get inside the building by interacting with the narrow opening shown in the screenshot. 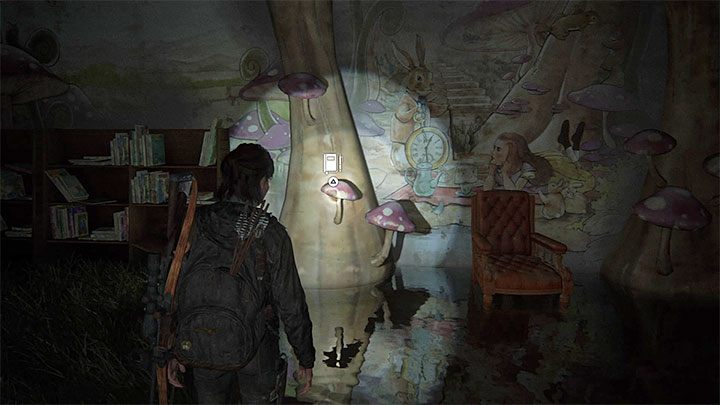 The diary entry icon will appear after you reach a partially flooded children's section. 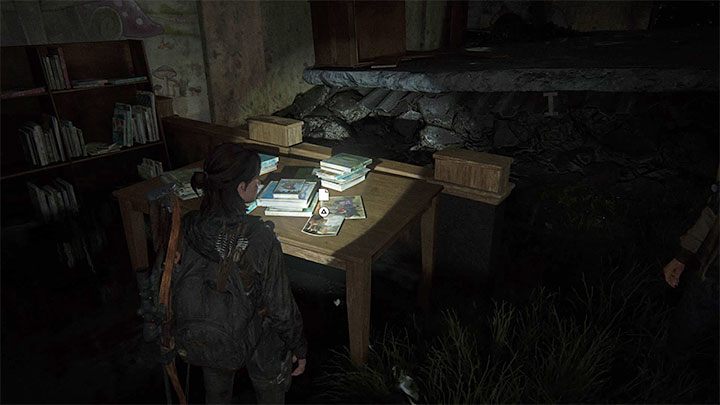 It's an artifact, and it's found in the same bookstore building where you made your diary entry. You have to find a page from a children's book that sits on one of the tables. 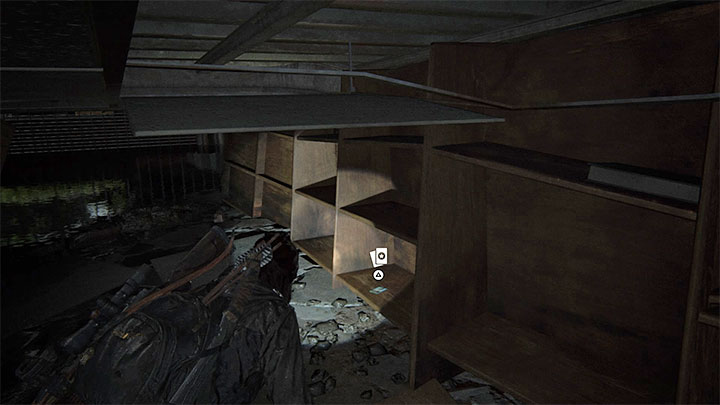 It's a collector's card and it is hidden inside the bookstore, which also contained two other secrets described above - a diary entry and a document. It's hidden under collapsed objects - you have to crouch to reach it. 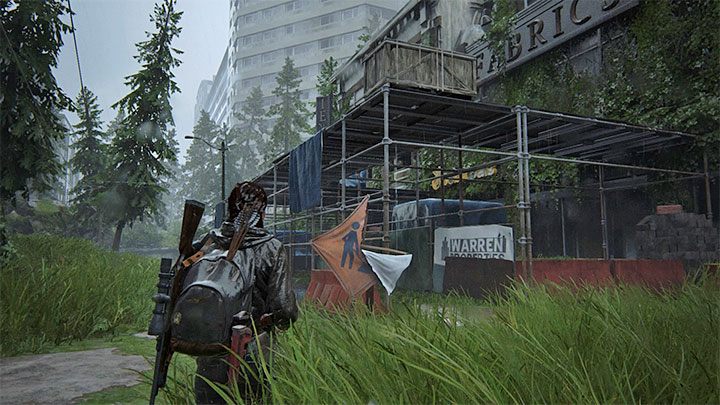 It's an artifact. You can find it near the scaffolding shown in the picture. There was a battle in this location and one of the opponents was occupying this scaffolding. 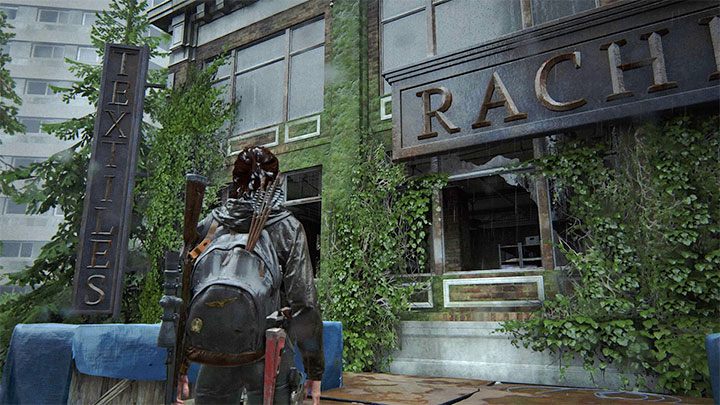 Climb the scaffolding and take an interest in Rachel's Fabrics' which is an adjacent building. You can jump to one of the shutters shown in the picture and get inside the building. 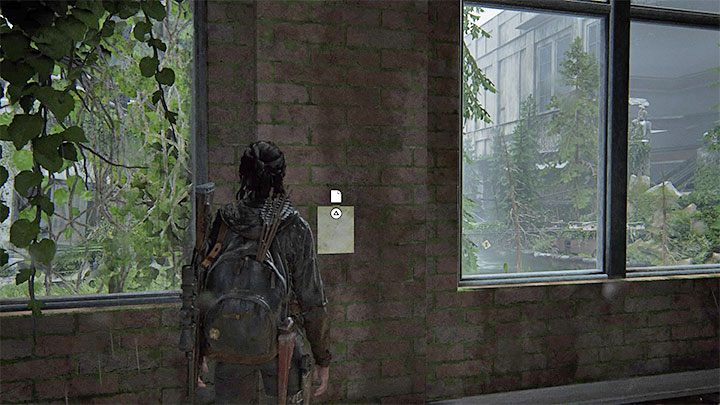 The document was nailed to a fragment of the wall between the windows. 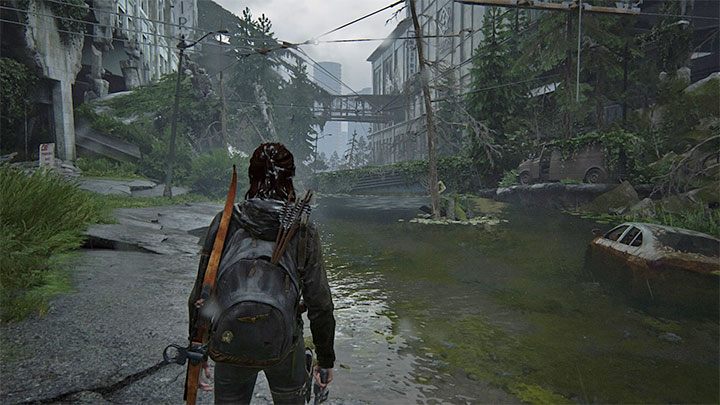 The workbench during Road to the Aquarium level is found at the end of the stage, specifically when walking through the area shown in the screenshot above. Ellie and Jesse can once again choose between jumping into the water and traveling on dry land. 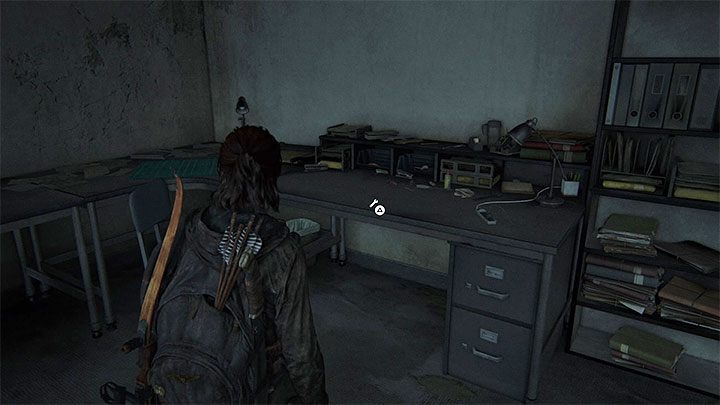 In order to locate the workbench, you need to visit the ruins on your left. The workbench is in the same area where you can find the white mannequins. 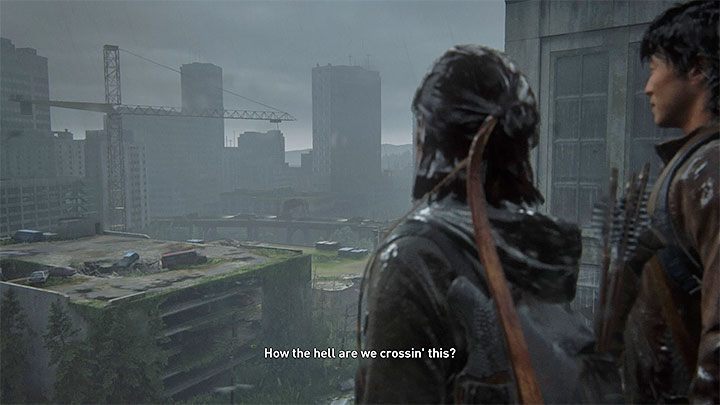 It's a collector's trading card - a collectible. Shortly after Ellie and Jesse have found the workbench described above, they will pass by the viewpoint. A short cutscene will be displayed. 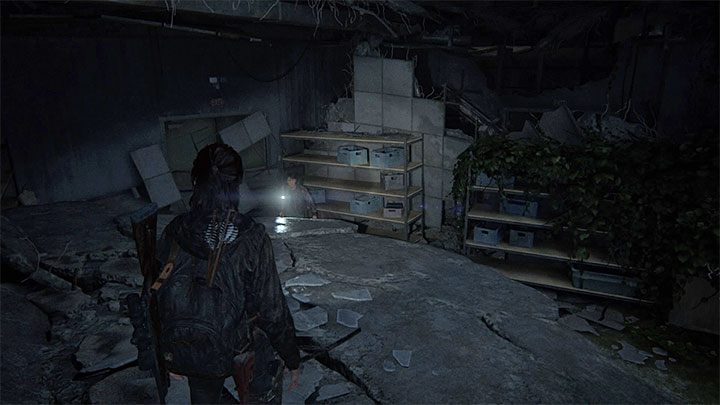 You have to be careful when searching the next room, as it is very easy to miss the collectible. Get to the ruined room shown in the picture. 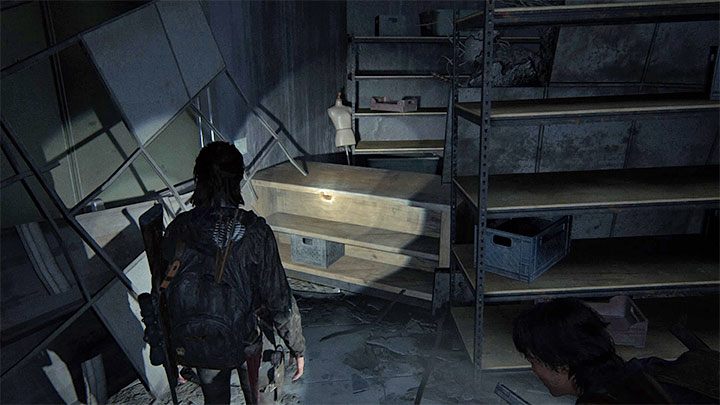 Go left and jump over the furniture shown in the screenshot. 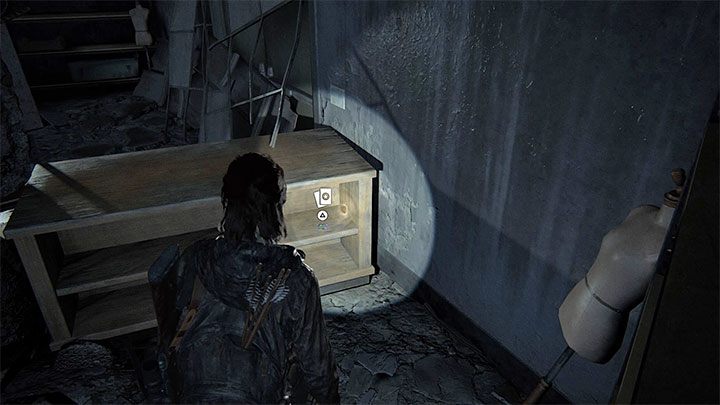 Just after you've passed the obstacle, stop and turn 180 degrees to notice the collectible.

Note - the trading card has to be found before heroes will start lifting heavy objects lying in the collapsed passageway.