This spoiler free page of our guide to The Last of Us 2 has a list of all the secrets in The Gate stage, which is part of the Seattle Day 1 chapter. These are the stages in which you play as Ellie. Some secrets can be found before you reach the titular gate - these are probably the easiest to miss.

There are 11 secrets in The Gate mission: 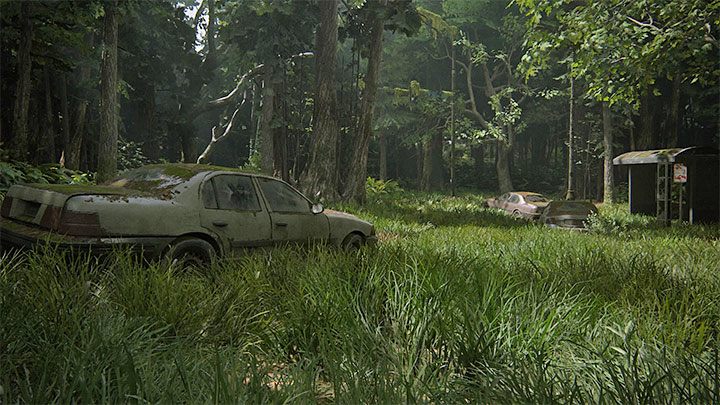 It's a trading card and you can get it at the very beginning of the stage. Dina and Ellie reach an area in the woods with the wreckage of several cars and an overgrown bus stop. 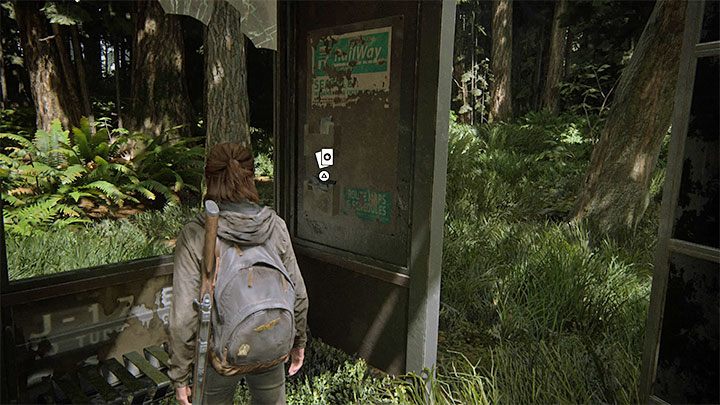 Check the bus stop to find the secret. 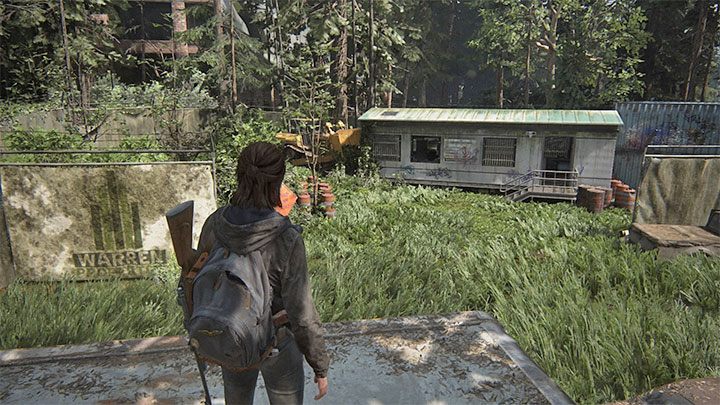 It's a collector's trading card - a collectible. This one can also be found in the early part of the mission, specifically when you are traveling along an overgrown highway. On the left you will find the small long building shown in the picture. 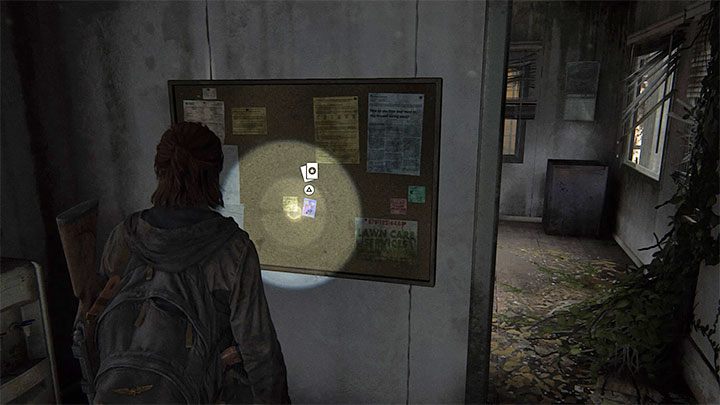 Check the notice board inside it. 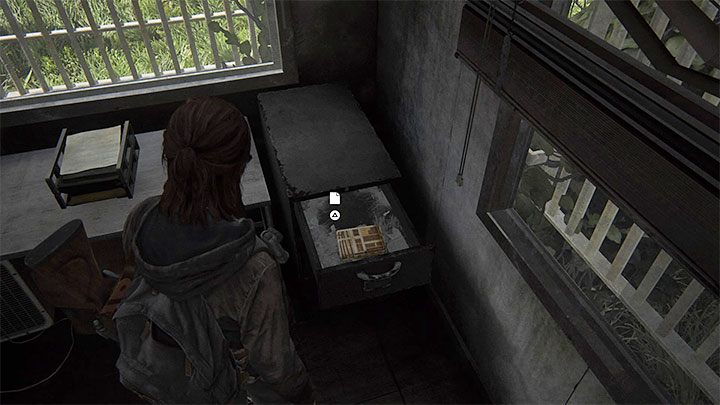 It's an artifact. Check out the drawer in one of the corners inside the same building near the highway - the one where you found the trading card described above.

The map is double-sided and has a practical use - Dina and Ellie will use it to navigate the Downtown, the next "open" stage. 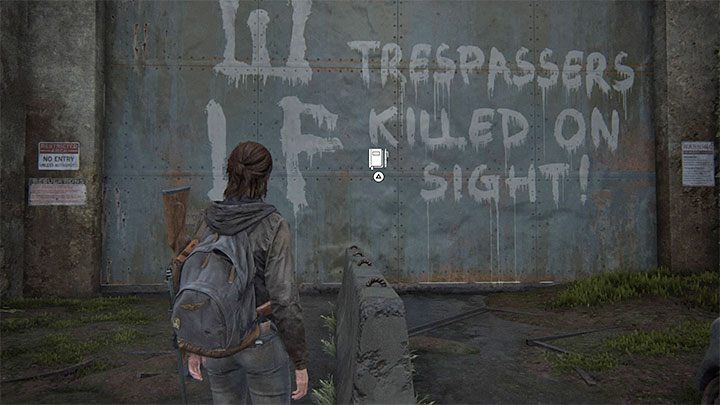 It's a very easy collectible to find - when you get to the big locked gate, get close to the white text painted on it. Ellie's journal icon will appear. 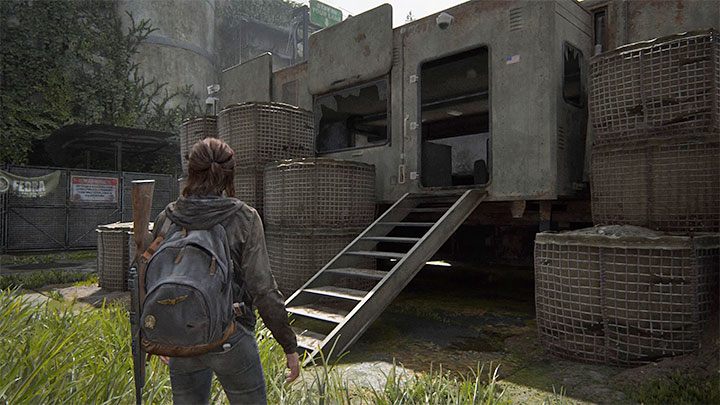 It's an artifact. Mobile command centers are in front of the locked gate - get inside the one presented in the picture. 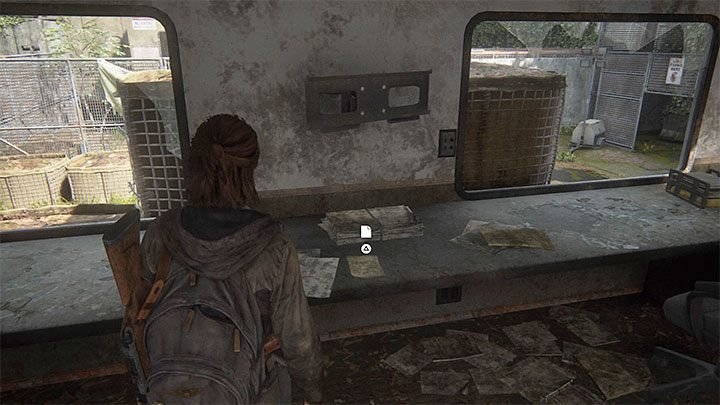 The document is on the desk. 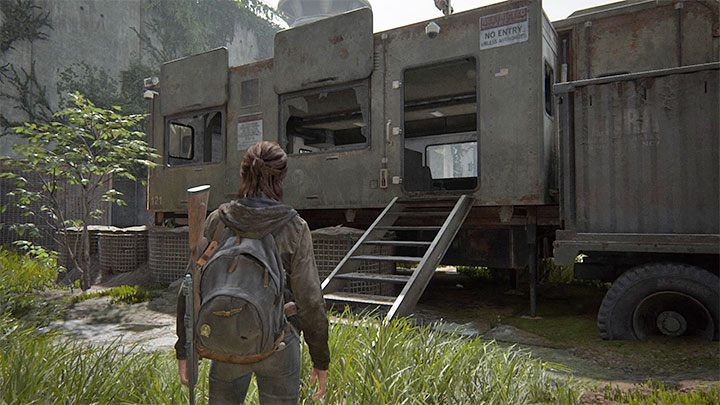 It's an artifact. Take a look at another mobile command center located on the square in front of the locked gate. 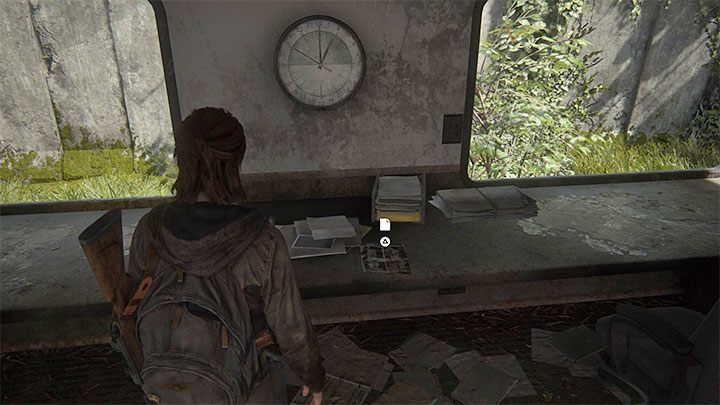 The document is on the table, under the clock. 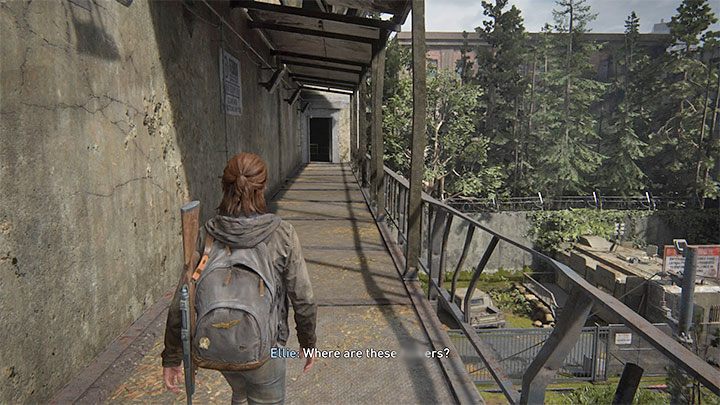 It's a collector's trading card - a collectible. You have to climb a bit - Ellie has to reach the high wall above the locked gate. Walk up the upper balcony and enter the observation tower. 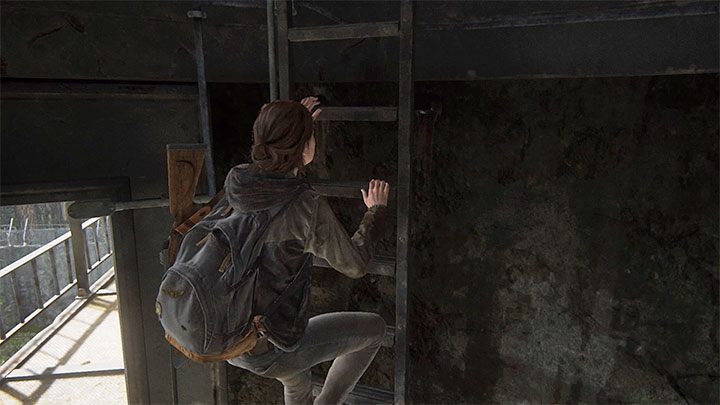 Don't go down. Use the ladder to climb to the top of the observation tower. 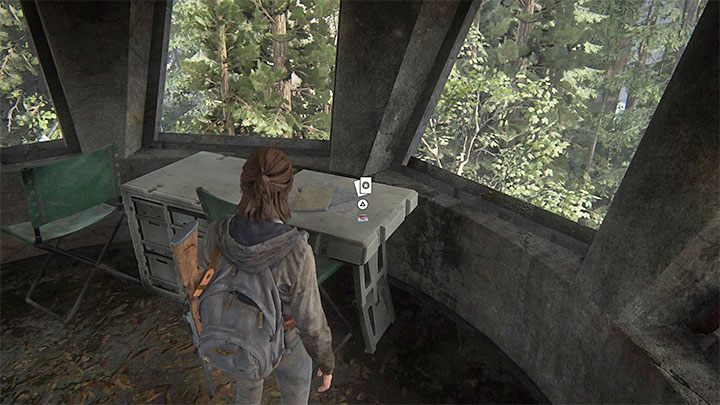 The trading card is on the desk in the tower's vantage point. 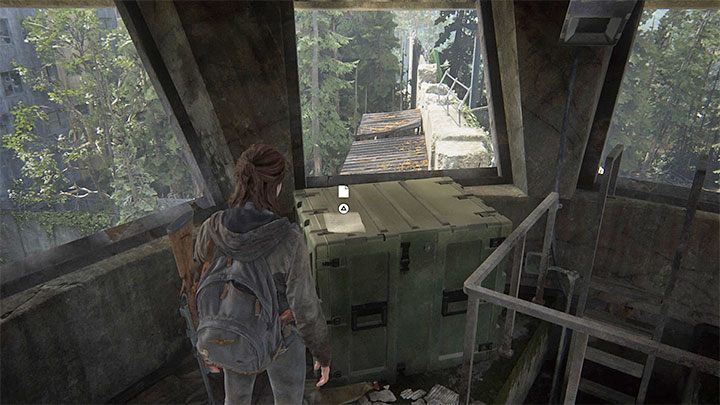 It's an artifact. This one is also located inside the observation tower, in the same place where you obtained the trading card described above. The document lies on the chest next to the ladder 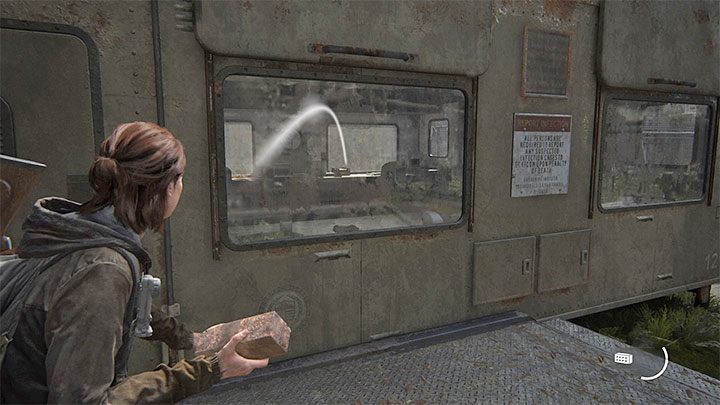 It's an artifact. You have to get to the other side of the locked gate and then go down the ladder to reach the bottom. You will reach a closed mobile command center. Break one of the windows to get inside. 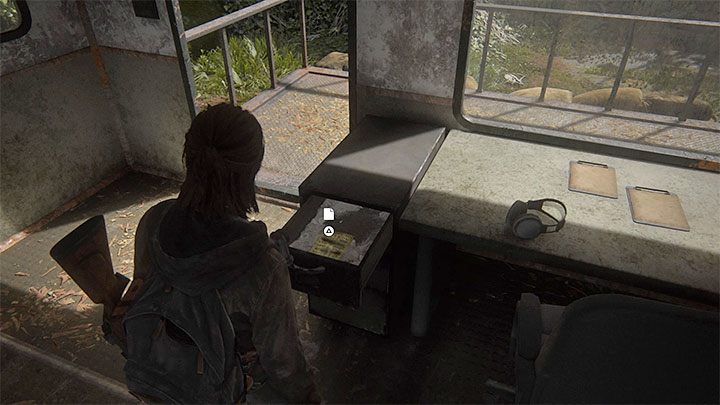 The document is in one of the drawers.

This is an important collectible - you will use the codes in this and next stage to open various gates. One of the combinations will also be used to open a safe in the Downtown. 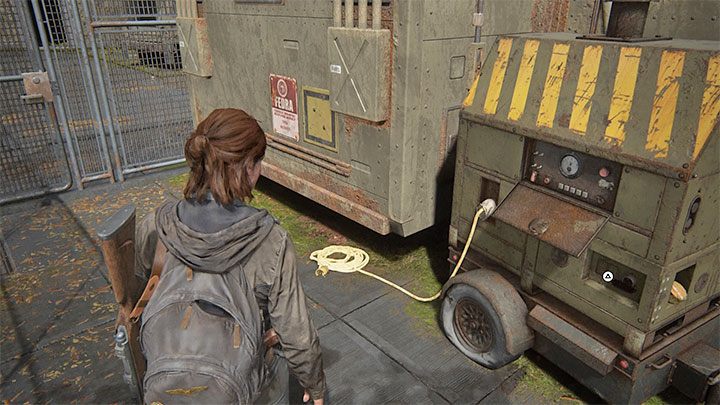 It's a collector's trading card - a collectible. This and another secret that is very well hidden. You can't make too much progress and advance further in this stage, because you'll lose your chances of getting this secret.

After searching the command center described above, go outside. Reach the generator shown in the picture. Activate it and pick up the yellow cable lying next to it. 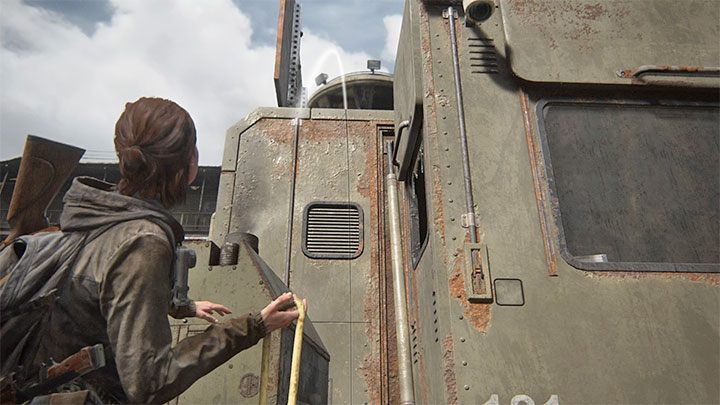 Don't set off to plug in the power cable yet. Instead, focus on reaching the collectible first.

Stay next to the generator and get ready to throw the cable. You need to flip the cable over the mobile command center. The correct spot in which you should make the throw is shown in the picture above. 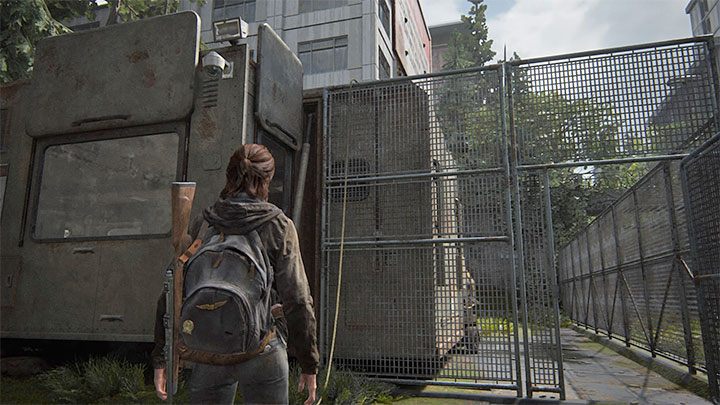 The cable must hang on the fence on the other side of the command center after the throw is made - this is shown in the picture. If the throw failed, then you have to roll up the cable and try again. 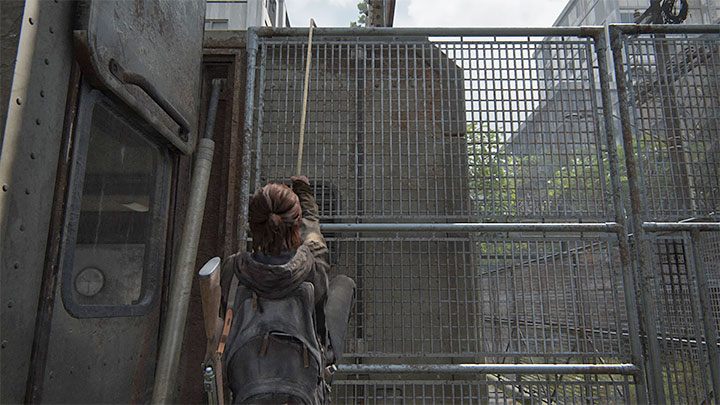 You must use the hanging cable to climb up to the roof of the Mobile Command Centre. 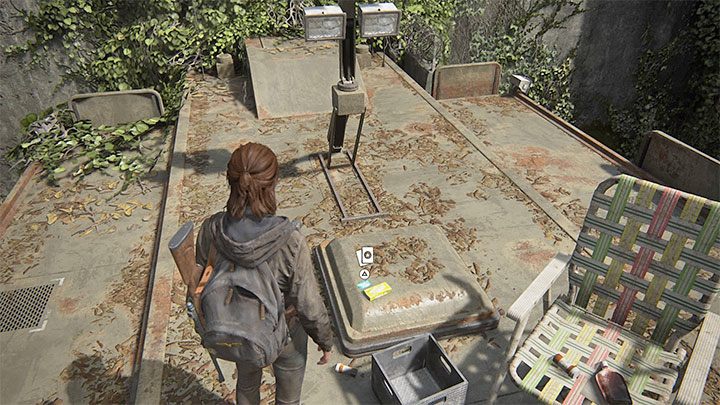 The trading card is on the roof next to the sunbed. 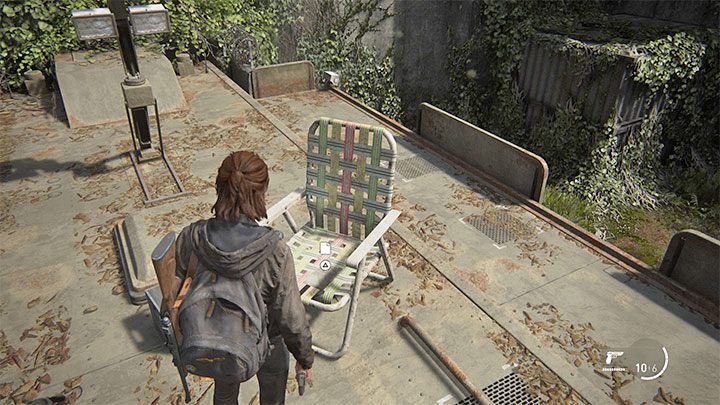 It's an artifact. It is in the same place as the trading card described above, that is, on the roof of the mobile command center. You can get there by flipping the yellow cable. It's on the sun lounger.