On this page of our guide to The Last of Us Part II, we provide information whether any varieties of melee weapons are indestructible. In addition, we explain what happens after melee weapon gets destroyed and how to repair damaged weapons. 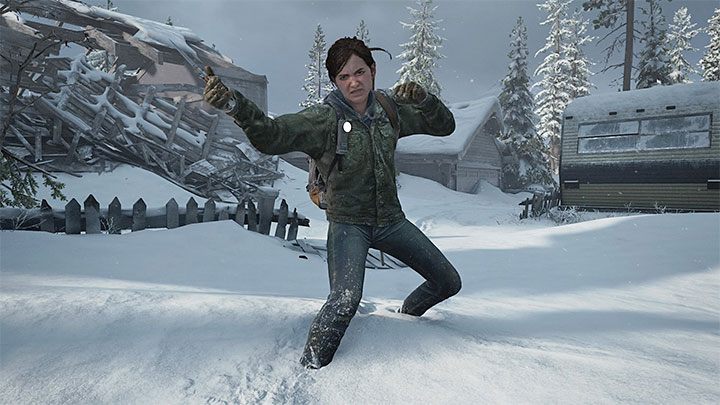 Ellie has with a switchblade which is indestructible. You use it in melee combat (Square on the gamepad) when you do not possess any "large" melee weapons. Unfortunately, the switchblade doesn't deal huge damage. 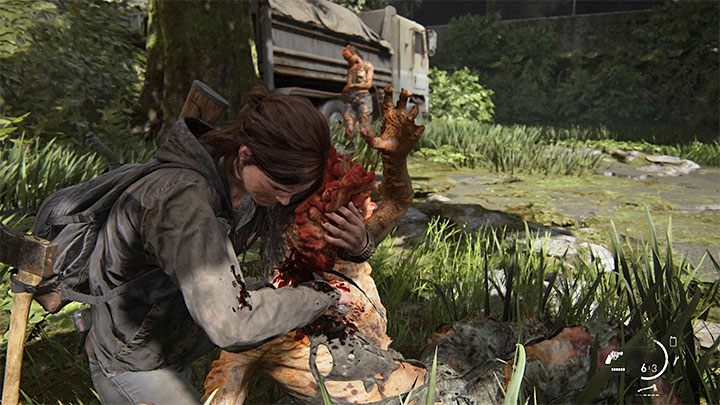 The switchblade is best used to silently assassinate enemies, but you can also use this weapon on various enemies - especially if you have managed to attack them from behind. Unlike similar actions known from TLoU 1. The switchblade won't get destroyed when if you attack a Clicker. You can kill as many enemies and monsters with it as you want. 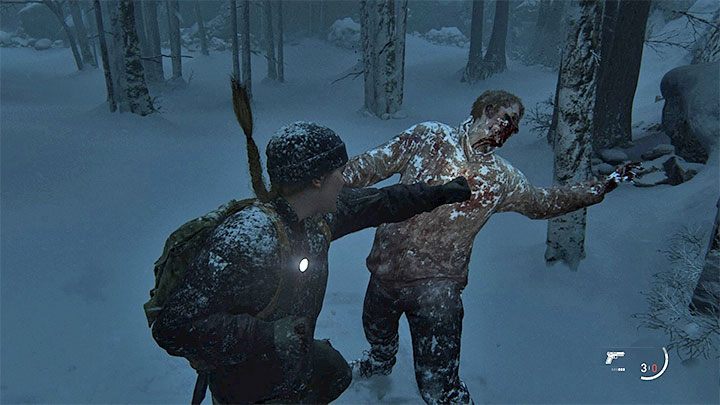 The situation is different with the other playable character, Abby. She doesn't have a switchblade like Ellie- she performs regular melee attacks with her fists. As with Ellie's switchblade, these are rather weak attacks - you won't be able to kill enemies fast with them. Remember to perform perfect dodges between the punches. 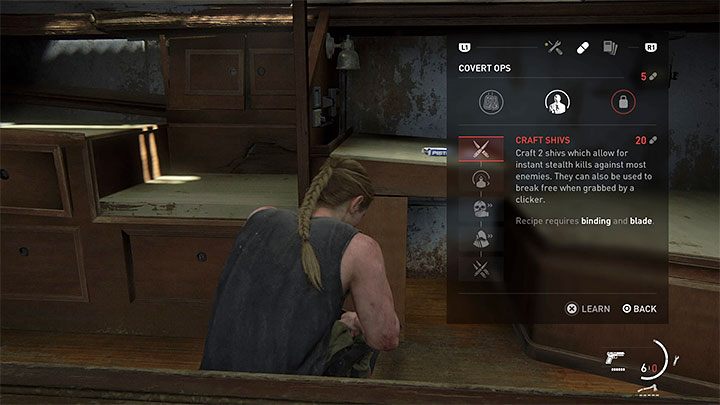 Abby can craft Shiv blades that work the same way as in the first part of The Last of Us. To craft Shiv blades, you will need to find training manual - Covert Ops. It is located inside a large suspended boat, which Abby and Mel enter during the On-Foot stage. Its exact location is shown on the Training manuals and passive skills page. 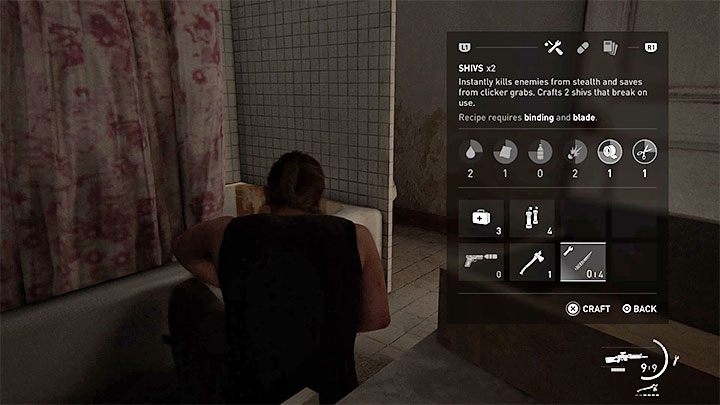 Craft Shivs passive skill is the first of the new tree and costs 20 supplements. You need 1 binding and 1 blade to produce 2 such weapons.

We also advise you to unlock the last skill, Craft more blades, from the same skill tree. You will be able to craft 3 Shivs at a time and store up to 6 of them in the inventory (4 by default). 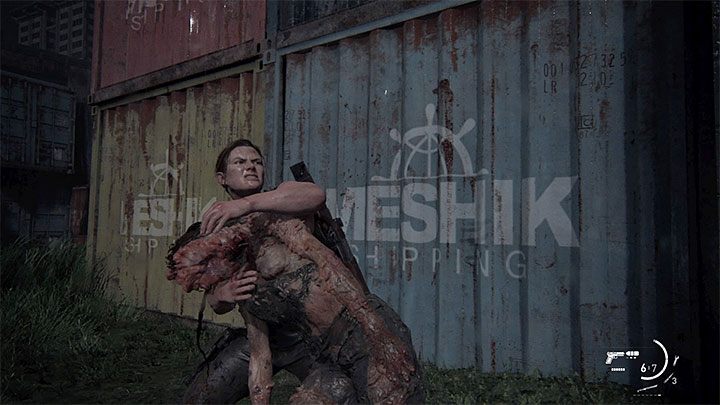 Each Shiv has three main uses. The first is to kill a clicker - you can use the blade after sneaking up on a clicker from behind or to protect yourself from death after the monster catches Abby. After a successful attack on a clicker, the blade is lost.

Since some locations are roamed by more than one clicker, there is a good chance that you will run out of stock. If you can't craft more Shivs at that moment (due to a lack of crafting materials), you will have to do something else - avoid clickers, or attack them with firearms or "large" melee weapons. 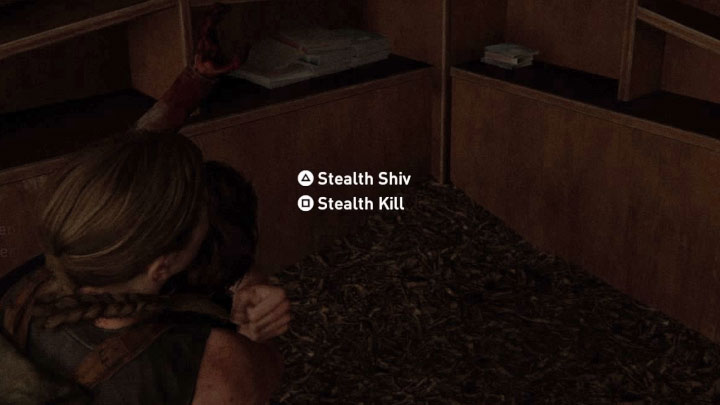 The second use of a Shiv blade is to kill regular opponents faster. When Abby manages to sneak up on a human or monster (except the biggest ones), you can grab them and decide what to do next: 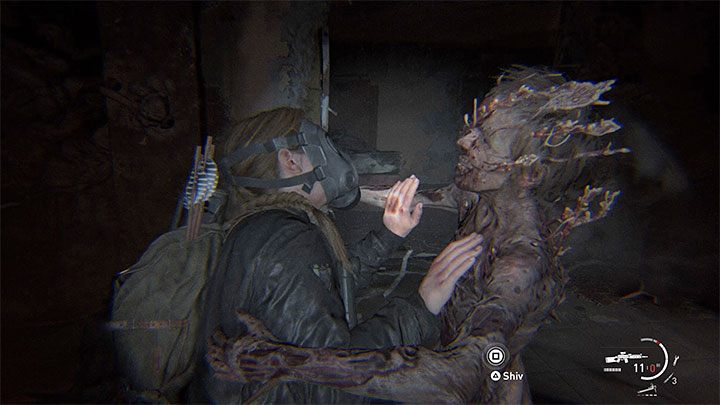 The third use of a Shiv blade is to kill opponents who have grabbed Abby faster. We're talking about situations where an opponent has grabbed Abby. In this case, the main advantage of using the blade is losing as few health points as possible. The longer you wrestle with an opponent, the more hp you can (needlessly) lose. 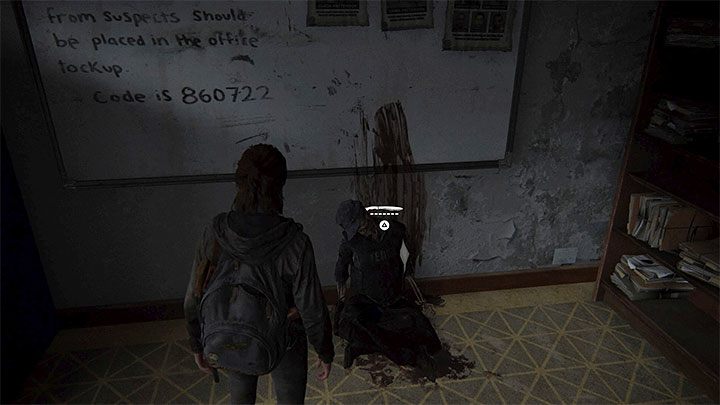 In The Last of Us 2, you can also find ordinary melee weapons - they can be, for example, baseball bats, axes, machetes, or hammers. All standard melee weapons have a certain durability and may get damaged. You can read about weapon's condition after checking its icon - the number of small rectangles indicates how many attacks with a particular weapon you can perform before it gets destroyed. In the example from the picture, the machete has as many as 7 durability points.

Try to look for the items with the highest number of uses. After you use all available stacks of attacks (only those attacks will count which have caused any damage to enemies or killed them) the weapon will be irretrievably lost and destroyed. Then you have to look for another one. Melee weapons can be found in the game world and by looting the bodies of some enemies.

Repairing melee weapons - what are the requirements? 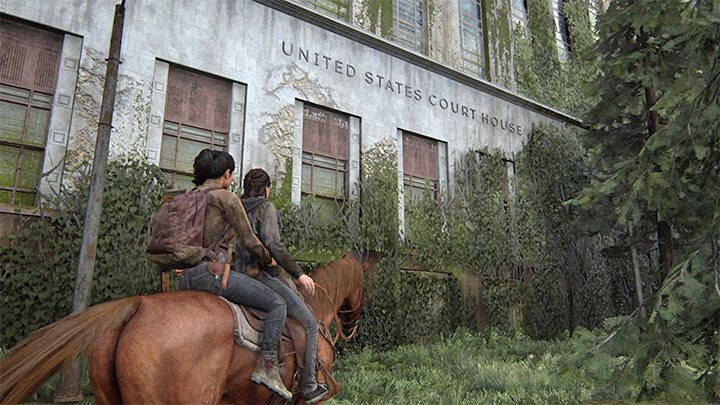 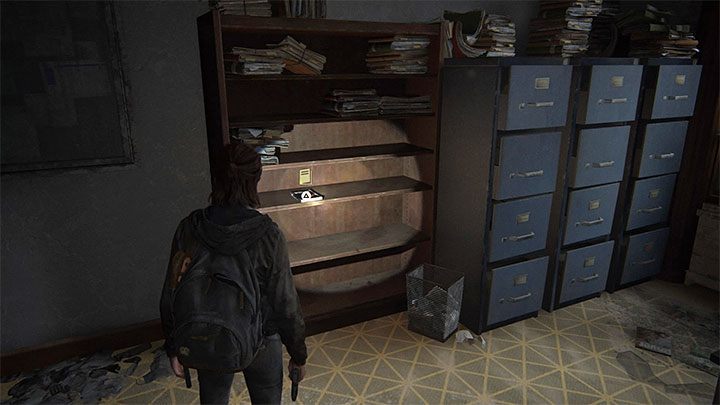 Initially, there is nothing you can do about the gradual durability loss of weapons and you have to be aware that sooner or later such items will be destroyed. This may change if you find the Training Manual: Crafting. The opportunity to get it will be available during the Seattle - Downtown stage, a large semi-open mission which allows you to explore the city center.

You have to explore the courthouse - United States Court House. There are a lot of infected creatures inside the building. Once you've dealt with them, start exploring more rooms. The training manual is in one of the rooms on the lower floor and you can get inside by breaking the glass. 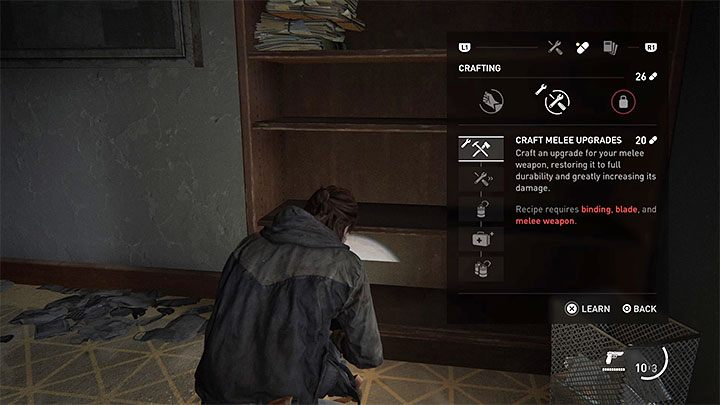 Go to the passive skills tab associated with the newly found manual. You have to buy Craft Melee Upgrades for 20 supplements. The new item will appear in the Crafting tab. 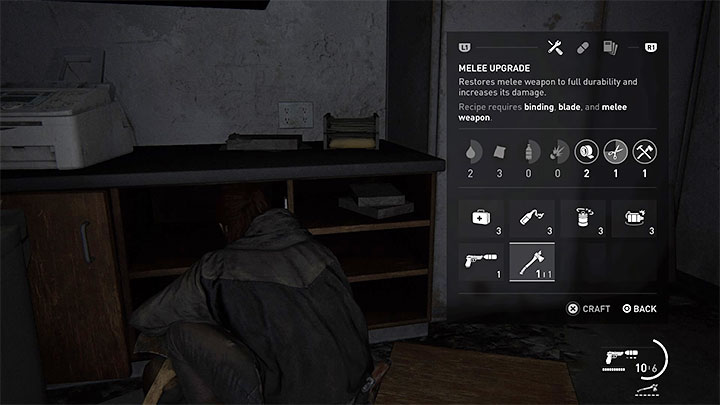 The Craft Melee Upgrades ability allows you to repair a damaged weapon to its full durability and increase its damage rate. Unfortunately, in addition to melee weapons, you must have two crafting materials - a binding and a blade. Just search for them in the game world.

As it is not necessarily easy to obtain crafting materials, try to repair seriously damaged weapons and those which still have multiple uses (6-7) available. This will allow you to enjoy each one as long as possible before you lose it or before you decide to make another repair. 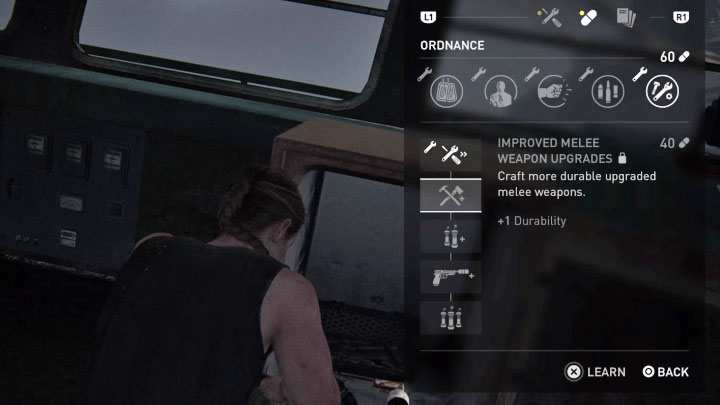 Abby, the playable character in the later part of the game, can also fix weapons. In the case of this character, the ability to repair and increase melee weapons damage (Melee upgrade) is available right away and works the same as for Ellie.

Abby can additionally unlock Improved Melee Weapon Upgrades passive skill. It is one of the skills in the Ordnance skill tree (see the Training manuals and passive skills page to find out how to unlock this particular training manual). It increases the strength of repaired / improved weapons by 1. You will be able to perform 1 additional attack with it before it gets destroyed.