This page contains the description of The Banner Saga 3's twenty-second chapter - Only We Few Remember it Now. This is the final chapter, you don't have to fight with anyone. Instead, you have to participate in the last few conversations and choose your ending. 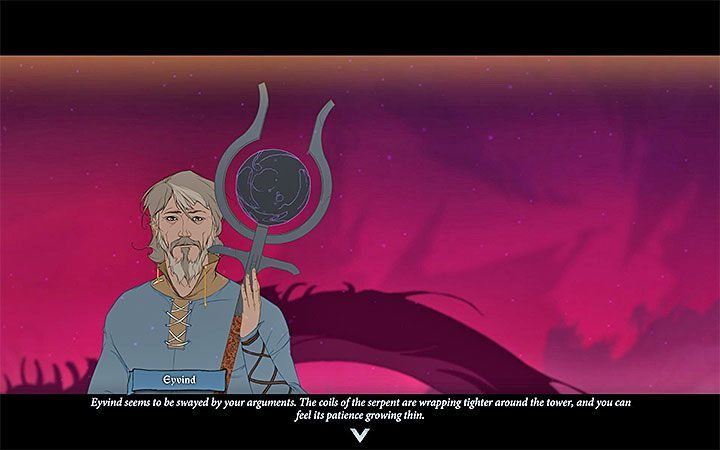 The first conversation (with Juno and Eyvind) starts before you climb the top of The White Tower. However, you won't be able to choose any dialog lines.

The important part is the meeting with Eyvind that starts after a short cut-scene with the Serpent. Here, you have to make a few choices which will determine Eyvind's attitude towards Iver. You can check your results in the final part of the conversation, right before you choose the ending. The picture above shows an example - Iver has managed to convince Eyvind.

Eyvind's "final" attitude towards Iver determines whether you will get the ending 3 or 4 - more about that below. 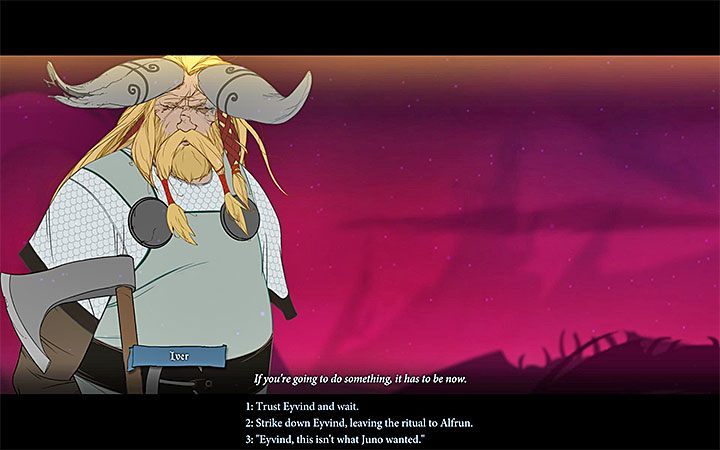 ENDING 1 - Trust Eyvind and wait - This is one of the good endings. It results in an agreement with the Serpent - Arberrang is saved.

ENDING 2 - Strike down Eyvind, leaving the ritual to Alfrun - This is one of the good endings. Eyvind dies. The witch succeeds with the ritual but at a cost of her own life.

ENDINGS 3 and 4 - "Eyvind, this isn't what Juno wanted" - After that the game will play one of the two possible endings. This depends on your choices in the initial part of the conversation with Eyvind. You get a good ending if you have managed to convince Eyvind (Juno is imprisoned, the world is saved). A negative attitude towards Iver makes Eyvind go mad - this leads to the destruction of the world. This is obviously a bad ending. 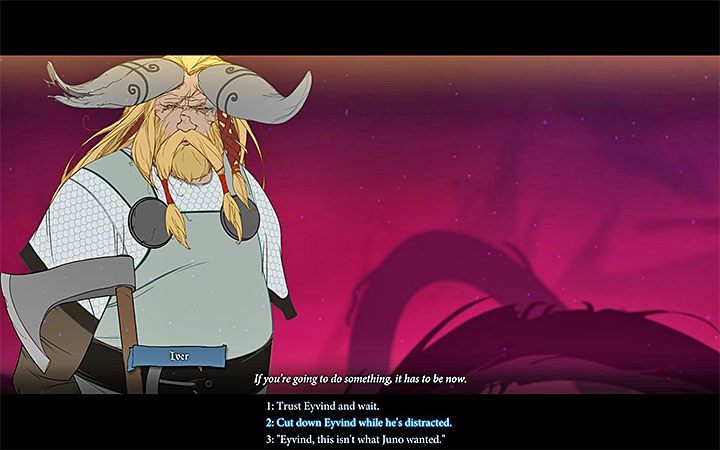 ENDING 5 - This variant is available only when you lose the final fight with Bolverk (chapter 21) - all the Ravens and other heroes except Iver, Juno and Eyvind are dead.

Speak with Eyvind, just like you would do to get the endings 1-4, and determine his attitude towards Iver by choosing dialog lines. The difference happens when you get to choose the final dialog line. The ending 2 is unavailable. Instead, you get a new option (see the picture above) - Cut down Eyvind while he's distracted. After that the game plays one of the bad endings (Alfrun is already dead which means that she wasn't able to finish the ritual by replacing Eyvind who was murdered; the darkness keeps consuming everything; Juno is forced to wonder alone). 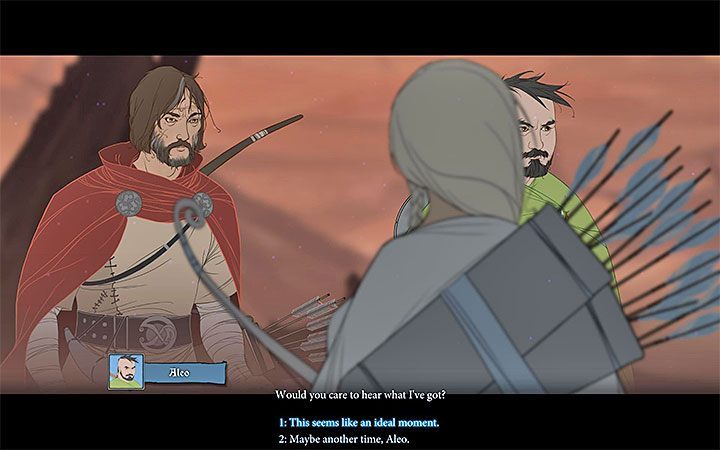 Depending on the ending you got, the game can play only one ending cut-scene or you can watch a series of cut-scenes or events (e.g. you can learn what has happened in Arberrang). Don't turn the game off when you see the credits - you can miss some parts of the ending.

In Arberrang, you can participate in a conversation with, e.g. Aleo. Agree to listen to his poem (see the picture above). This unlocks Poetic Justice achievement.

Note - Load your save made at the beginning of the chapter 22 if you aren't happy with the ending. This is a very short chapter which means that you will be able to watch all the endings available to you. Sadly, endings that are affected by your choices made in previous chapters aren't available here.