In this chapter you can find information on the combat mechanics in The Banner Saga 3. This combat mechanic is very similar to the previous games. The goal of this chapter is to remind you the most important aspects and to inform you about the new features before you decide to participate in your first battle. 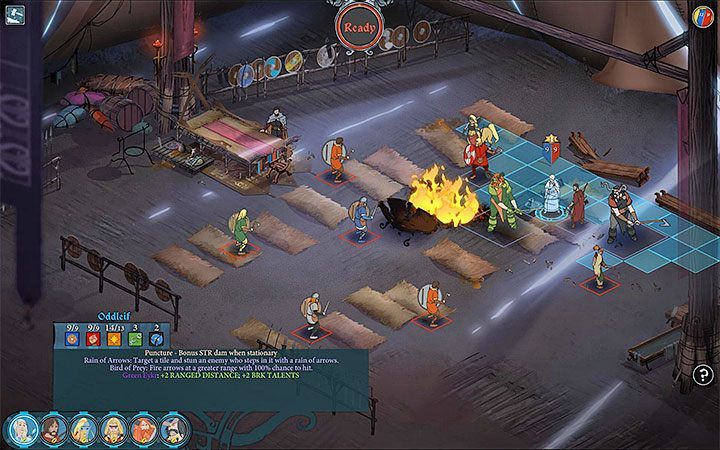 You can prepare for the majority of the battles - always use this option. The exception to that are, e.g. fights where enemies have managed to ambush the caravan.

Preparations are divided into three areas. The first thing you have to do is to select which heroes will participate in an upcoming battle. Avoid selecting characters with similar abilities. It is much better to have a diverse party that includes melee fighters, ranged characters and those who can support the rest of their allies. In The Banner Saga 3 you can also use Dredges. These characters can be very helpful. However, you should spend a few battles to learn how to use them and to train their rather unique abilities.

The second thing you can do before a battle is to level up your heroes and equip them with better artifacts - these topics are more broadly discussed in Character progression chapter.

Third, placing your party members on the arena is highly important. It is impossible to come up with one perfect tactic because number of tiles differs with each battle. You can, e.g. have less tiles or they can be scattered around an entire battlefield. The general rule is to place Varls and other offensive characters in the front. Ranged and support character should be placed in the back and guarded by more powerful characters. You should also remember about characters' attack range. For example, characters equipped with a spear don't have to stand right next to an enemy because they are able to attack enemies from a distance.

Moving around a battlefield and the order queue 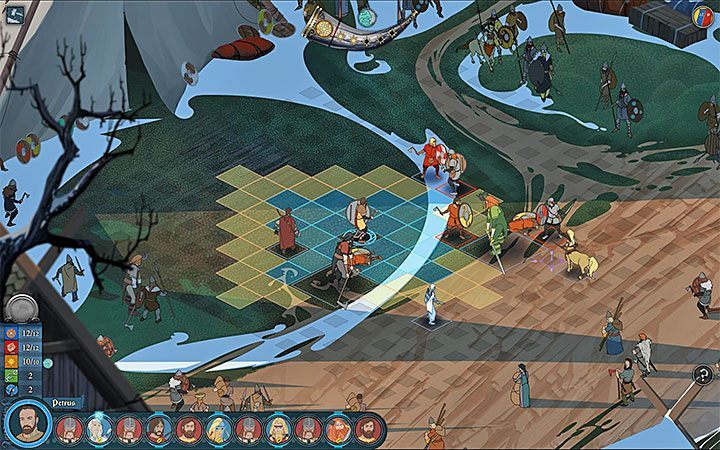 The Banner Saga 3 leaves the general combat rules almost intact. Battles are turn-based where both sides of the conflict make their moves alternately. The bar at the bottom of the screen informs you about the queue order - thanks to that you can easily determine when a given character can make their move or when you can anticipate an attack of a specific enemy. However, this order isn't "untouchable". Certain unique abilities allow both sides to manipulate the queue bar. Furthermore, when there are only two warriors left, the game initiates a special mode where both sides don't have to wait too long for their turn.

Another important information regarding the queue order is that it can display time left for reinforcements to arrive. If you allow a certain number of turns to pass, new enemies will join that fight. You should play more offensive during these battles so you can eliminate all enemies before the turns counter reaches zero.

Just like in the previous The Banner Saga games, you can move your heroes on tiles that are in their reach (marked blue) or you can spend Willpower points to increase their reach (these tiles are marked yellow). Use Willpower only when you really want to reach an enemy as fast as you can in your current turn.

You should also consider terrain obstacles and traps. Obstacles can always be destroyed. However, the game counts this as action which means that your character can't do anything during that turn after they destroy an object. You can also walk around obstacles or treat them as a barrier that hinders your enemies from reaching one of your party members, e.g. a weak archer. Traps differ between the battlefields, e.g. you can encounter fire. Move your cursor over a trap to learn more about it. Walk around dangerous tiles to avoid dealing damage to your heroes. Defeated Warped can leave ashes which are treated as a trap - a hero who touches them loses 1 Willpower point. Remember to avoid them, too. 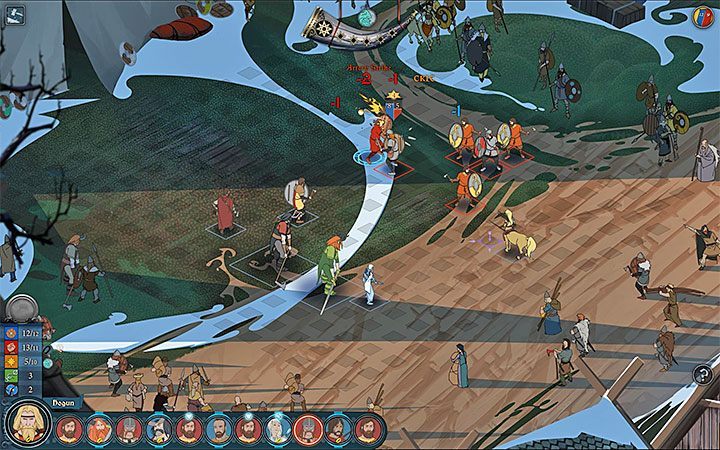 Willpower's role in The Banner Saga 3 is as important as it was in the previous games from this series. Its base value is based on a hero's stats. However, you can receive additional Willpower points thanks to:

Attacking and fighting off enemy forces 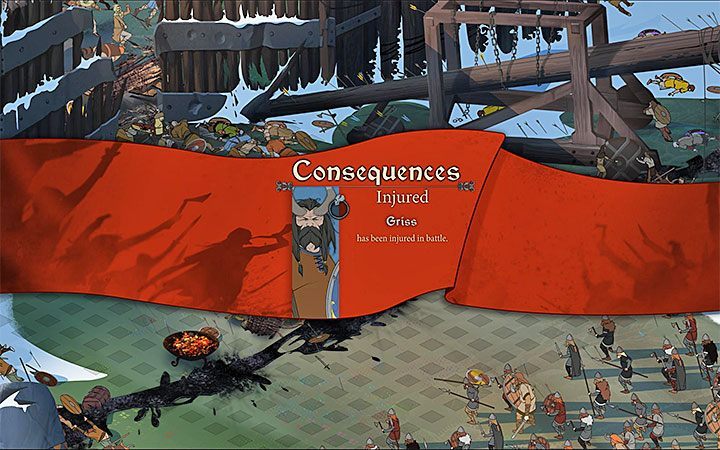 The system of dealing and receiving damage didn't receive any ground-breaking changes. Below, we remind you about the most important elements of this mechanic:

Battles where enemies attack you in waves 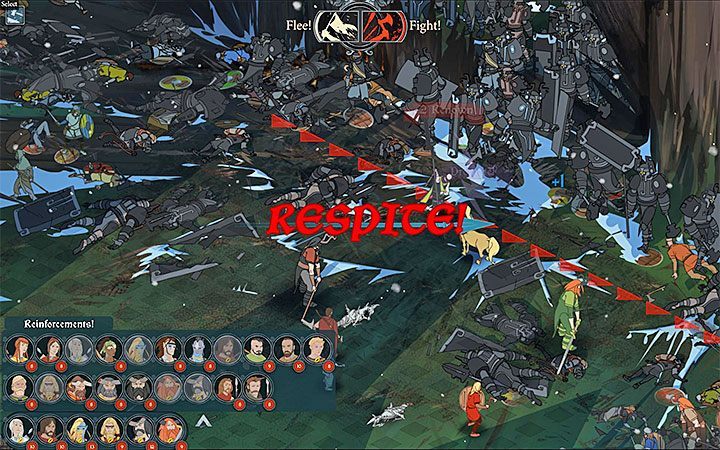 Battles divided into a few phases are an important new feature of The Banner Saga 3. They are more difficult than regular battles. However, winning them grants you more renown points and unique artifacts. Below you can find the most important information regarding these battles:

The Horn and the Spear 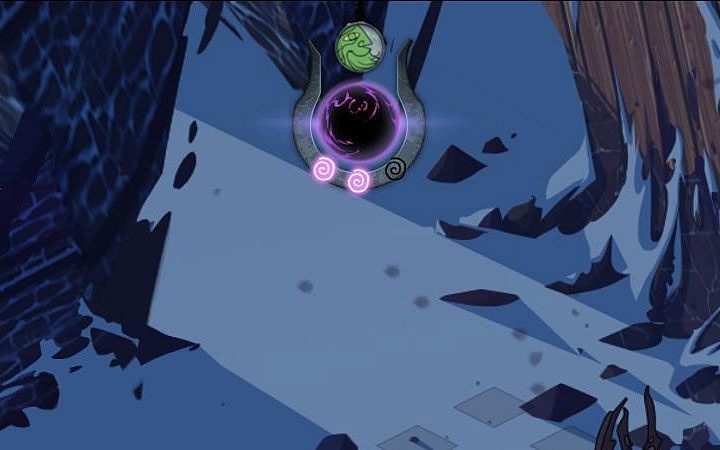 During the fights you can use the Horn and the Spear. These unique items are available to all heroes and they can be helpful in winning a battle. Both items are presented on the top of the screen and you can charge them by killing enemies. They both hold a certain number of charges. Try to use them whenever you can - you can't collect more charges if you have the maximum number of them.