Rooftops is the 5th stage in the game Stray and the name is very fitting, as it mainly consists of climbing and dealing with zurks. Our walkthrough also explains how to defend yourself in the location with the elevator and how to install the device on the radio tower. 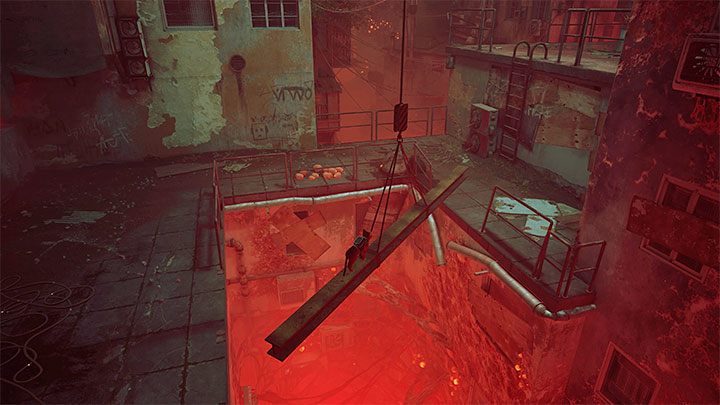 You will get to the rooftops after your first visit to the slums (stage 4). From the very start, you have to watch out for the zurks - avoid approaching them whenever possible (in some locations there are alternative paths, e.g. the beam depicted in the above screenshot), use the run option, and during escape scenes, look for opportunities to jump up higher objects to lose the monsters. 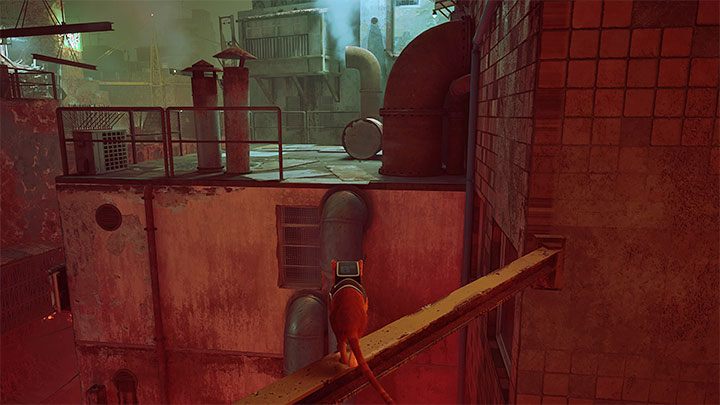 Along the way, look for higher ledges and protruding objects that you can jump to. Some metal beams can be set in motion (example in the screenshot), which happens when you jump on them. In some cases, you have to jump on the beam more than once to arrive at its "destination" and allow you to continue your journey. 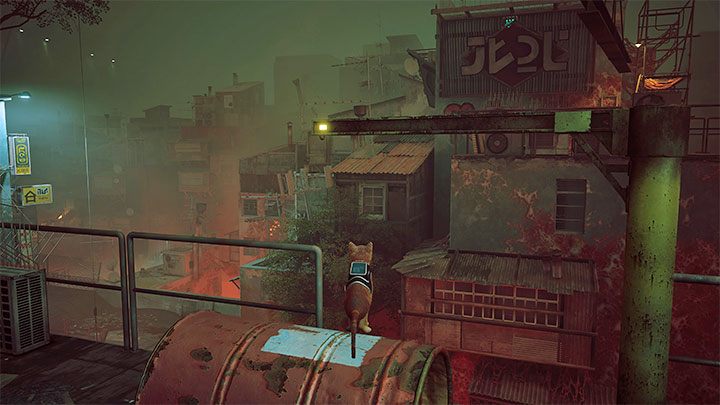 You will reach a barrel that needs to be rolled. You need to get it as close as possible to the hanging beam from the screenshot above. This will allow you to climb the barrel and jump towards the nearby beams from there. 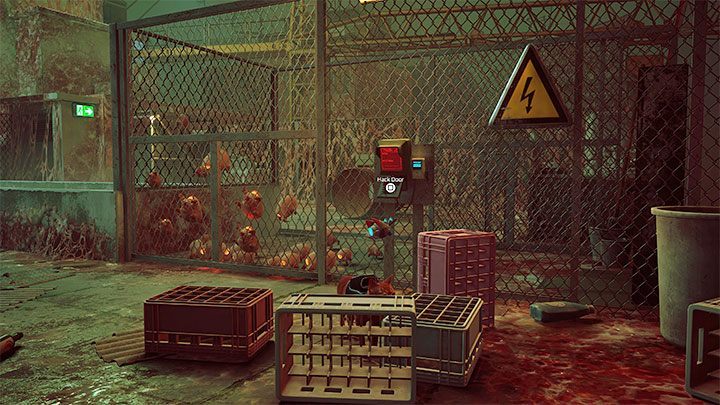 You'll end up in a location with zurks - you have to outsmart them. Use the hacking option to trap the monsters between the fences (pictured above). Doing this will allow you to safely roll the second barrel from the location where zurks were initially. Climbing the rolled barrel will let you continue climbing. 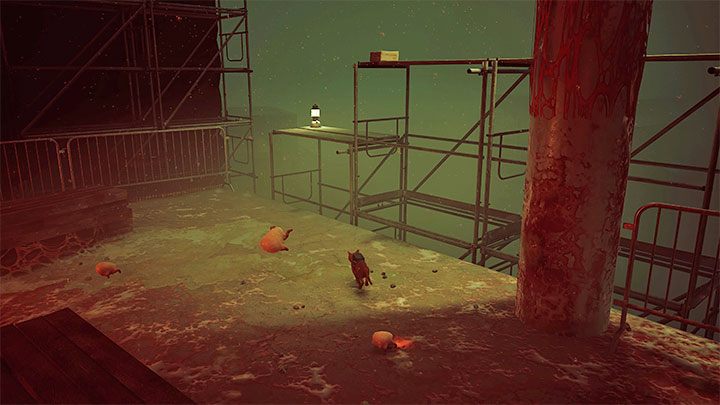 The linear route will lead you to a wooden plank that you have to push and make a bridge out of. Go to the next location. You have to watch out for the zurks and be ready to escape - head towards the scaffolding to prevent the monsters from reaching you. 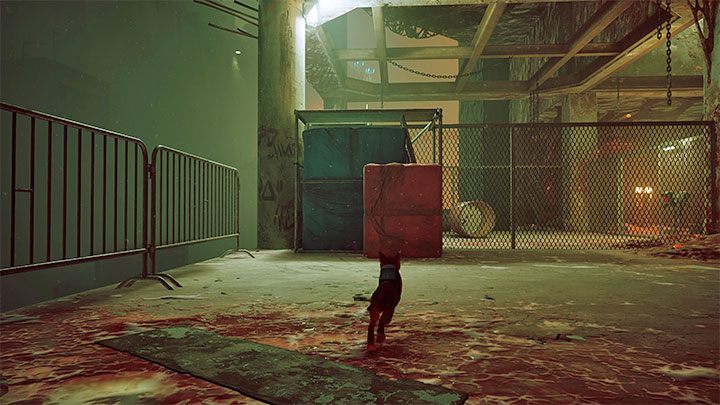 Head to the next level. You will notice the zurks in a fenced-off area with a barrel. Use hacking on the gate to open it and start running away from the zurks. Lead them to the side of the fence (pictured above). Climb the objects, enter the barrel from the fenced area, roll it outside and climb onto it to resume climbing.

Starting the elevator and avoiding zurks

You will reach a location with an outer elevator shaft. 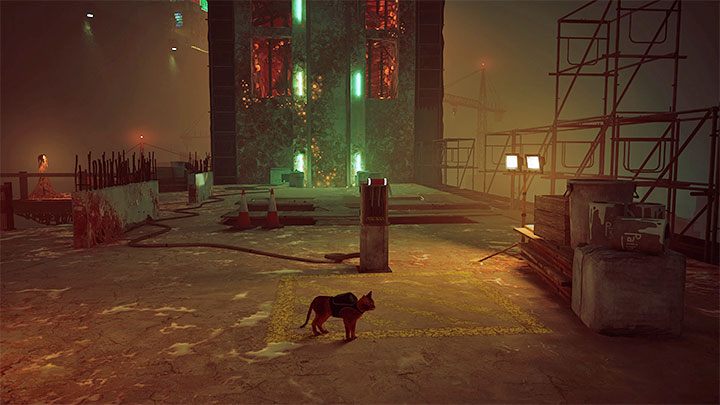 Pulling the lever will activate the elevator, but it will also alert the zurks. As the elevator slowly start to descends, you'll have to defend yourself against the monsters for about a dozen seconds. 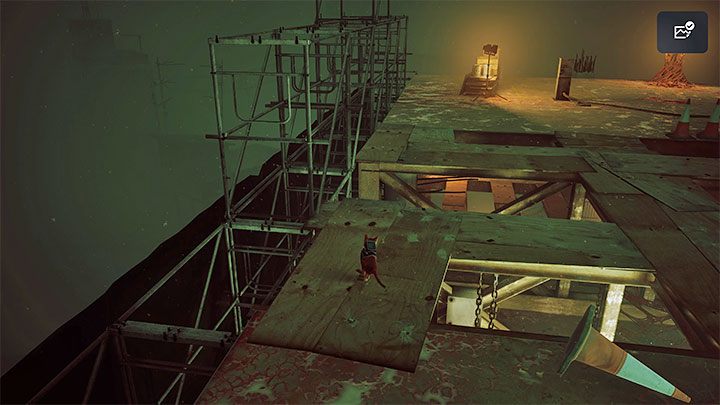 Start running around the edge of the construction area and keep going. Your goal is to have the zurks continue to follow your cat instead of approaching it from the front or side. 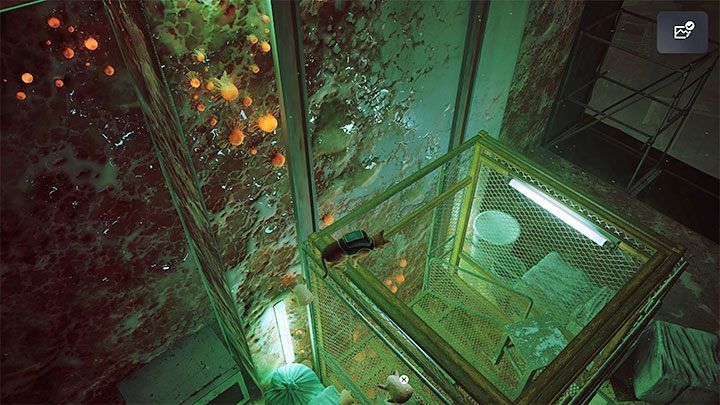 Head towards the elevator when it reaches downstairs. Climb the crate, jump over the fence and ask B-12 to set the elevator in motion (keyboard). Here, you'll be safe and you won't have to be afraid of the zurks.

Mounting the device at the radio tower 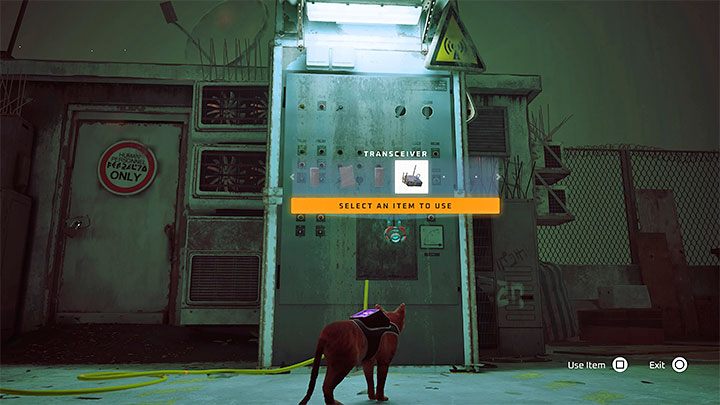 The elevator will take you to the roof of the tallest building with a radio tower. You need to install the Transceiver that you received from Momo in the previous chapter. Interact with the chest at the base of the tower and select the device from the inventory. 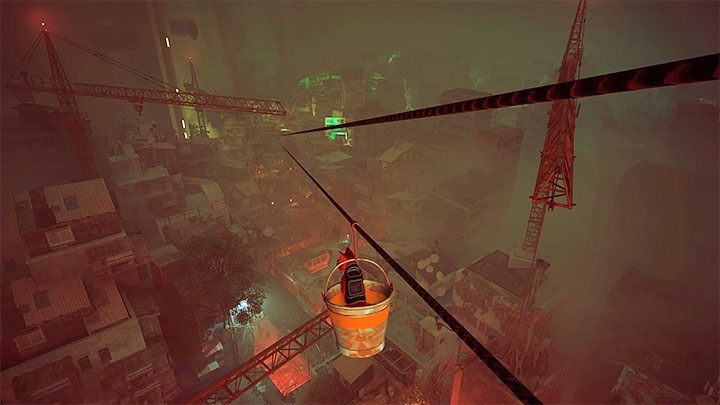 The last step is to lower the rooftops and return to the slums. After listening to B-12's commentary on the panorama of the city and the artificial sky, enter the bucket to start the long descent.