Diplomacy window in Stellaris contains options, which aside from trading, can have a permanent effect on the relations between the empires. The section below describes these actions in detail.

Apart from trade, you can perform actions that will affect relations between empires. Each option can be used once both races meet certain terms. If a nation that you are negotiating with is a vassal of another race, diplomatic options will be limited.

All the available diplomatic actions are listed below.

An open conflict is the most unpredictable action. Before you declare war on another nation, plan your moves and objectives carefully. You should gather as many resources and units as possible. Garrisons ought to have defensive and offensive armies. Your income will rapidly decrease and you will face a lot of enemies.

In Stellaris, each war must be declared according to specific objectives. It's best to engage in minor conflicts that can end after winning 1-2 battles, and establishing certain terms. Don't choose to attack a capital that is situated dozen solar systems away from your boarders. It is highly possible that your fleet will be destroyed before it actually reaches its objective. You should engage in single battles concerning planets near your boarders. You can declare war due to one of two possible reasons: to liberate a planet, or conquer it. Neutral, uninhabited systems do not matter. If your enemy loses control over a system that was selected before you declared war, he will automatically lose the entire war.

Before you engage in a conflict, gather your troops close to a planet that is near your objective. Your fleet should remain in a spaceport, which will reduce its maintenance cost significantly. Gather as many troops as possible and divide them according to your objectives. Remember that you will need land units to take over a planet (they can be transported via transport ships). If you leave such units without any protection, they probably will be eliminated by enemy fleet.

When you prepare your units, open diplomacy section and declare war. You can't declare war on a nation which was your ally, or established a non-aggression pact with you. In both situations, you will face waiting time, during which you won't be able to declare war. 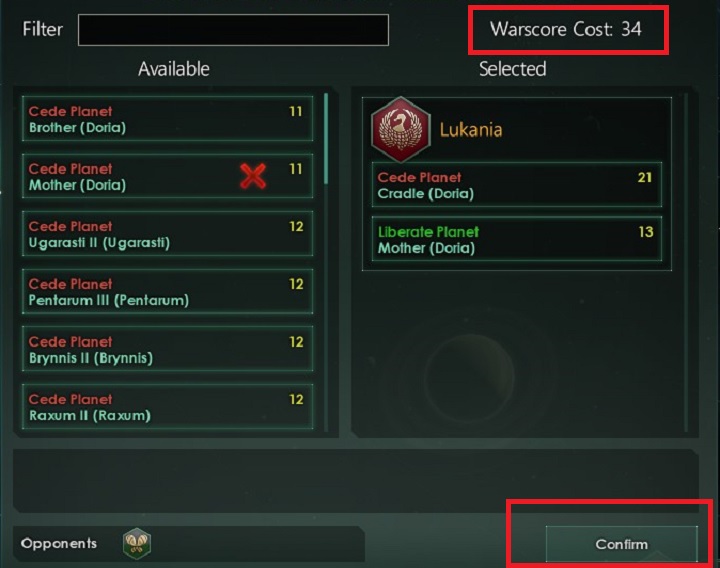 Once the war begins, you should check the diplomacy screen. It's divided into two parts. On the left, you will see all the planets that are currently controlled by an empire. The right side presents objectives that have been chosen by you. To add a planet to your war objectives, you will need to select an appropriate option, then hold down LMB and drag it onto the symbol of your empire.

As presented in the screenshot, each planet has its own value that will be added to the overall Warscore cost. The maximal cost is 100 and if you exceed this limit, the confirm button will become unavailable. Whether you want to conquer the planet or liberate it, will affect the overall cost. You will pay less if you decide to liberate planets via diplomatic approach.

Remember: if you declare war on a nation that is allied with other empires, you will declare war on all its allies as well. Each of them can choose different war objectives concerning your country. The same goes for empires that have vassals. A vassal will always send troops to support its sovereign. It's best to attack nations that are currently at war; this way your foe will not focus all his forces on you.

If you are winning a war, you can announce status quo, which will end the war immediately (useful when you want to save resources or are concerned about hostile forces). You will keep all your planets. You may also negotiate when you are losing a war, but it is not likely that an enemy with superior power will end war and achieve only some of the established objectives.

You can ally with other nations as long as you hold on to previously established objectives. An empire that you want to become allies with, cannot be at war. If you have friendly relations with another nation, other fractions can accept alliance.

Once you become allies, you have full access to your ally's boarders and can operate across his land. He will also support you with troops if needed.

You can become allies with other nations or ask other races to join existing alliances. It all depends on your opinion among other nations. If an alliance consists of four or more nations, you can vote to create commonwealth. One empire needs to become a leader that will decide upon military operations and standardizing your fleet. Just remember that declaring a war and leaving the commonwealth will not stop the conflict.

Joining an alliance will cost you 3 influence points per month but will not prevent you from any diplomatic actions. You can proceed with a war as you like and your allies will always support you. However, if there are any other alliances, all the involved nations will join the fight.

Remember: alliances are an interesting solution that can help you establish friendly relationships between nations, and thus conquer other empires. Remember that if you want to conquer one of your own allies, you should halt cooperation earlier, due to waiting period.

If another empire is weaker than yours, you can force it or use a diplomatic approach to make it your vassal. Vassals will grant you access to their boarders and support you during war. You can set vassals free but if they want to leave the alliance themselves, they will have to declare war on you. A nation can't become a vassal if one of the sides is currently at war.

Remember: it's a good idea when it comes to conquered planets that are highly developed in terms of economy. Not only will you expand your influence, but you also will avoid costs of development of primitive planets.

Diplomacy allows you to protect another empire or become protected by one. Protectorates do not assimilate with the protector due to independence treaty.

The protector will reduce the cost of discovered technologies by 50%. You should know that once the protected empire learns 40% of the technologies, it becomes a vassal immediately. The only way to leave such a pact is to declare war. Protectorate is not possible when one of the sides is at war.

Remember: it's a very risky pact as you easily become a vassal of another empire. You can protect other empires but try not to become the protected one.

You can establish embassies in other countries or allow one in your own empire. Embassies will slightly improve relationships between empires.

Embassies will steadily improve your reputation among other nations. You can abandon the embassy project at any time without further consequences, but all the reputation will slowly decrease.

Remember: embassies are a useful tool and you should establish one with neighboring empires that are much stronger than you. You can allow others to create embassies in your own empire but your key objective should be to improve relations with nations that are a potential threat.

It's one of the factors that will grant you additional influence points. Announcing rivalry will decrease your reputation by 100 points, but will make other rivals of this nation friendlier towards you. Depending on the empire, you will get different bonuses to your monthly influence points. On the other, hand all diplomatic actions, apart from war, will be unavailable.

You can declare rivalry against a country in which you previously have established an embassy. Abandon the embassy project to do that.

Remember: rivalry is a useful tool if you are running out of influence points. However, it will decrease your reputation, and thus prevent any alliances in the long run. You can stop rivalry, but it is best to continue it until you conquer your target.

You can insult another nation at any time. Each insult will decrease your reputation by 100 points. Furthermore, using this option too often may lead to a war.

Remember: for the purpose of rivalry, you can use insult as long as you wish, but you should be careful when dealing with neutral or friendly nations. It's unlikely that you will win war with several opponents at once.

This site is not associated with and/or endorsed by the Paradox Interactive or Paradox Development Studio . All logos and images are copyrighted by their respective owners.