Discover the mystery of the Philosopher's Stone and what happened to alchemist Nicolas Flamel. On this page of the guide to Steelrising, you will find a walkthrough for the quest Nicolas Flamel's final journey.

You will receive this mission when you visit the Cordeliers Convent, after completing the quest To Les Invalides. You will receive it from Abbe Gregoire. Talk to him about all topics. You have to find the tomb of Nicolas Flamel.

Head to the La Cite location. Get to the place where you repaired the mechanism that opens the golden gate - more specifically get to the Vestal that was behind it. We described how to do this in the walkthrough for In search of Abbe Gregoire quest. If you already have some shortcuts unlocked, you won't have to take the exact same route. 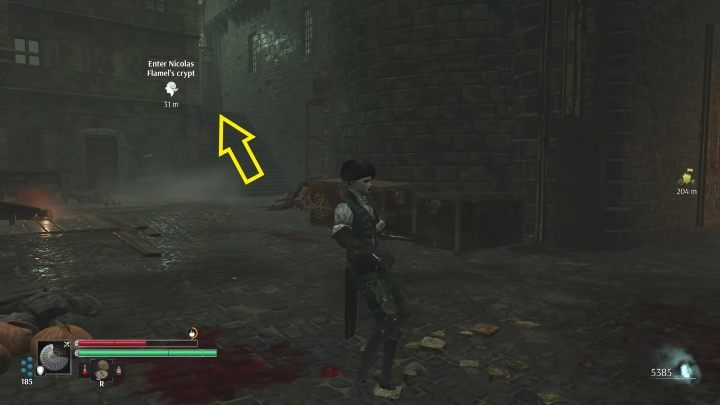 From the Vestal, head up the stairs to a side alley. At the top of them is a gate, which you will unlock with the key you got from the priest.

In the square behind the gate you will encounter a Courier (you can read more about these Automats on the Arachnids page), a MAster-at-Arms(you can learn about this opponent here: Guards) and a Prototype (more about them in this section of the guide: Prototypes). Continue heading straight. Turn right at the end of the road, and left in front of the barricade. Watch out for the Phoenix (read about them in the Hunters section).

At the end of the alley, on the left is a steep path - follow it. Once you reach the top, a Heavy Prototype and a Lumberer await you (read about this enemy in the Labourers section). 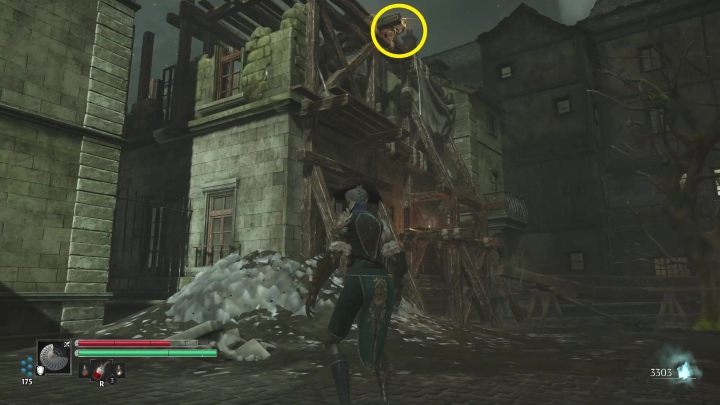 Turn right. Climb the stairs. There is a gate that can be pried open. Do so. Behind it is a Phoenix and 2 Tiger Grenadiers (you'll read about them on a separate page of the guide - Felines). After entering the square, look up. You can pull yourself up to the top of the building. 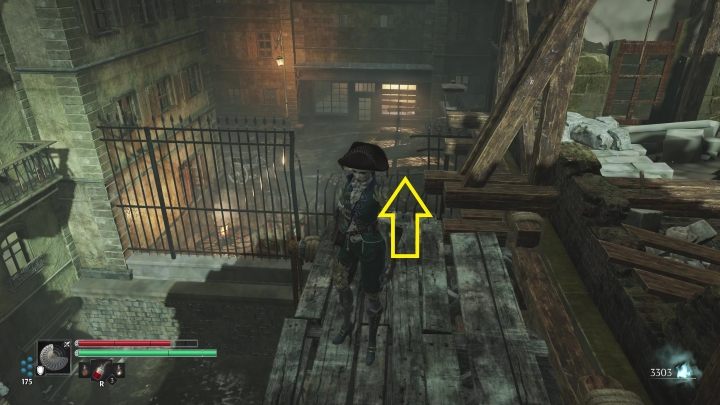 Go to the other side of the building. Turn to the right and jump over the fence.

Go along the path. You can unlock the gate that is straight ahead - it's a shortcut. When you reach it, turn right. Go straight, after a while you will come across a Vestal. Activate it. In the cemetery behind it there is a hole in the ground. Jump into it. 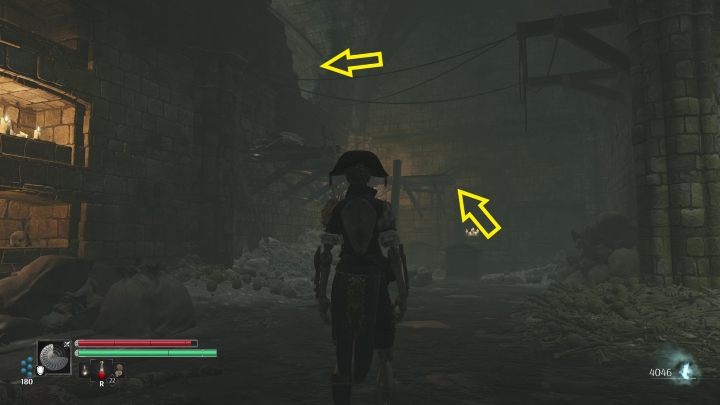 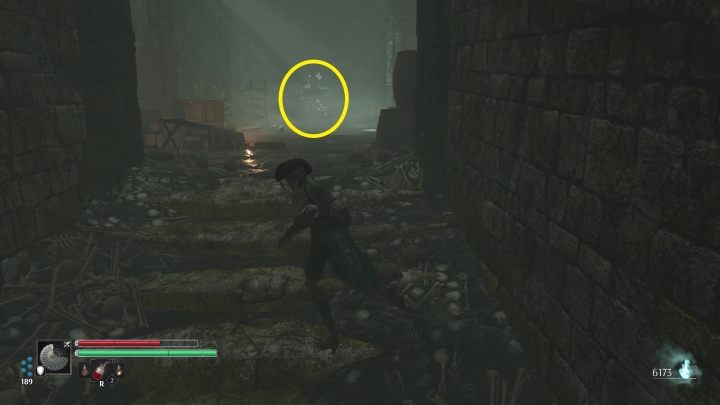 Go ahead, climb the stairs and destroy the wall opposite of you. 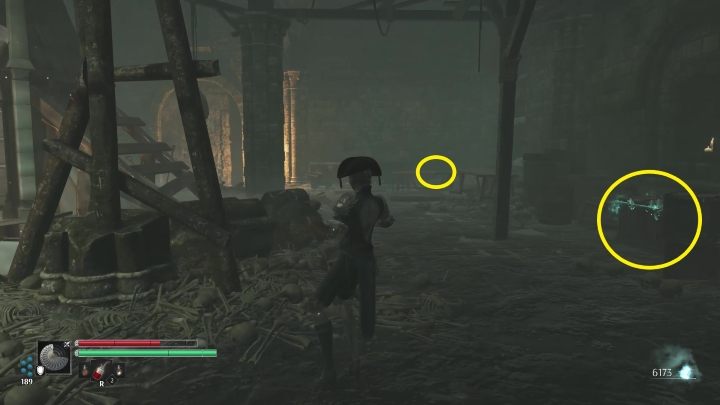 To the right of the entrance is a chest. It contains a carriage token. You can use it to instantly teleport to the carriage. On one of the tables in the corner of the room is a letter connected with the task. Read it. You have to go to the Tuileries.

It is worth using the path shown below, as it will save you the trouble in the future when continuing this task.

If you don't want to teleport and prefer to walk to the Horseless Carriage, there is a wall near the tables that can be smashed. Go through the tunnel (on the way you will encounter 2 Heavy Prototypes). At its end, you will be able to pull up to go outside. You will land on the fenced-off part of the cemetery, near a Vestal. Be careful, because there are Couriers and a Frost Acolyte. Unlock the cemetery gate - the city is now open to you.

Head to Tuileries. You have to get behind the square guarded by an Ice Squire. We already described how to get there during the Troubled Waters quest (beginning of the Louvre section). 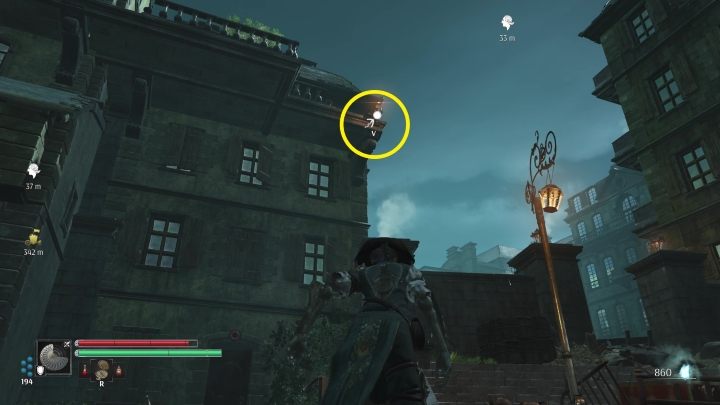 This time, however, do not go through the tunnel, but pull yourself up to the top of the building near the breach in the wall. 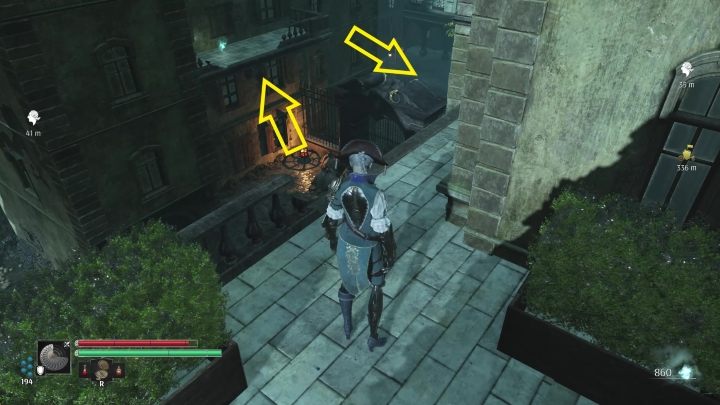 Jump over the balconies and get to the square behind the locked gate. Be careful, as a Forger and a Phoenix are guarding it.

Now jump to the hole in the square and go through the tunnels. After turning left, you will encounter a Pruner (this enemy is discussed here - Serpents). Keep moving forward. 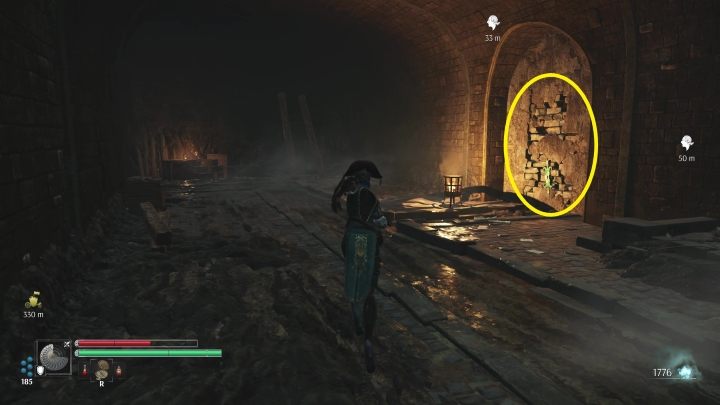 On the right, you will see a wall that can be destroyed. Do so. Behind it you will find a hall, guarded by a Lightning Ram (we wrote more about this enemy on a separate page of the guide - Rams) and a Courier. Get through the room. 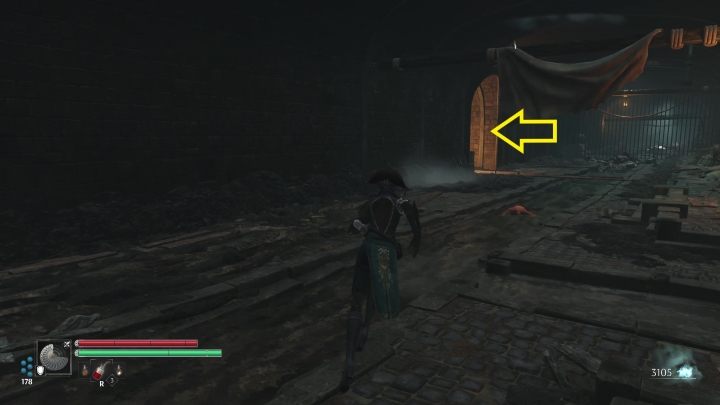 Keep walking through the tunnel. At the end of it you will find a grate, and in front of it a Lancer. A Heavy Prototype is also hiding around the corner. Turn left. There is a short branch of corridors ending with a hole in the ceiling. You can pull yourself up through it. 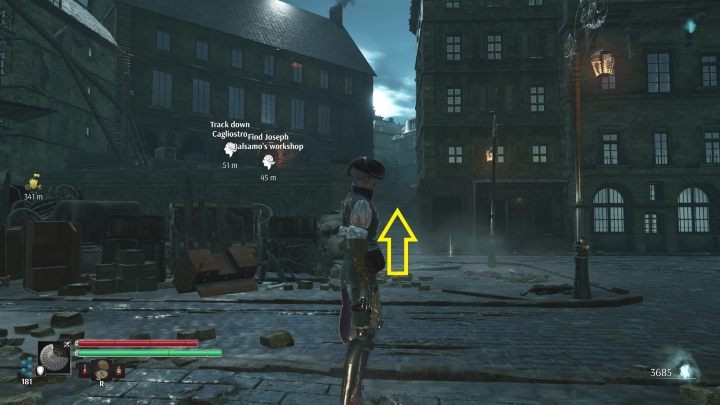 You will reach a square. It is guarded by a Lumberer and a Courier. You must now climb the stairs (they are opposite the place where you left the underground). In front of them is an Echoe. Pick it up. 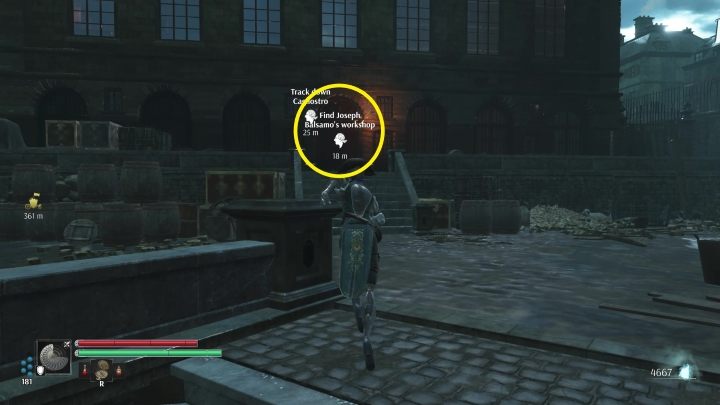 When you climb the stairs, you will see the gates to the building - you are at your destination. The document you are looking for can be found on the table just behind the entrance. There is also a chest with a carriage token on the first floor.

After completing the task, exit the building through the second passage (located on the ground floor). You will reach a courtyard guarded by Prototypes. A shortcut is found there. Now return to the Cordelier Conventand

Talk to Abbe Gregoire. The man will send you to Bailly and Lavoisier. Researchers will report that they need schematics. Head to Tuileries. 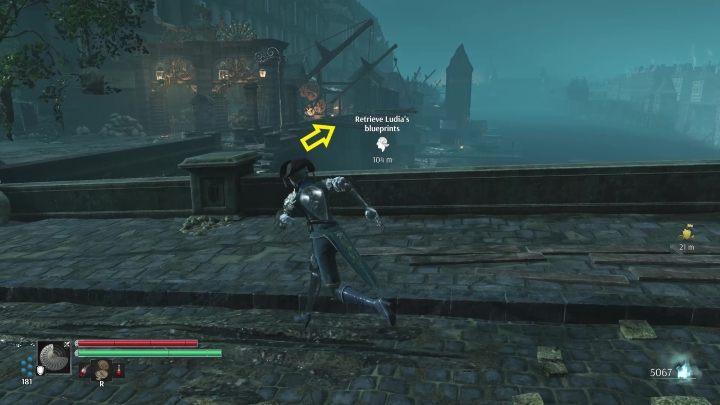 After crossing the bridge, turn right. Use the Selenite Momentum to cross the hanging platforms to the other side of the locked gate. The square is guarded by a Hoplite (you can read more about this enemy on the Guards page). You can now open the gates with the lever - this will unlock the shortcut. In the future, you will not have to jump on the platforms again.

Now go down the stairs - to the river. The bank is guarded by a Prototype, Pruner and Musketeer. 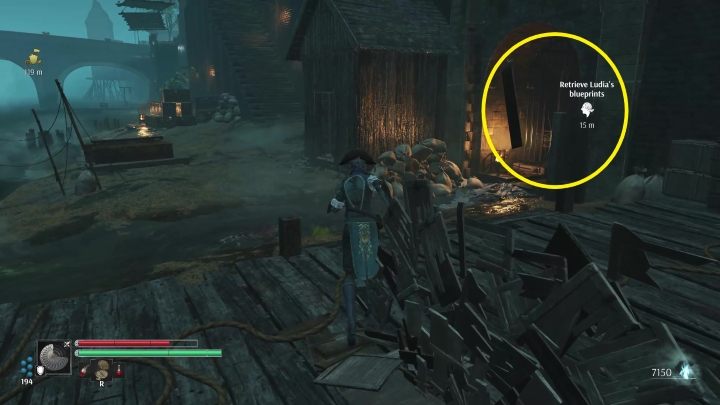 Near the stairs is a gate, which you must destroy to proceed. Enter the sewers. Follow the corridors and go down to the lower level of the tunnels. You will end up in a small room, which is guarded by a Harvester. 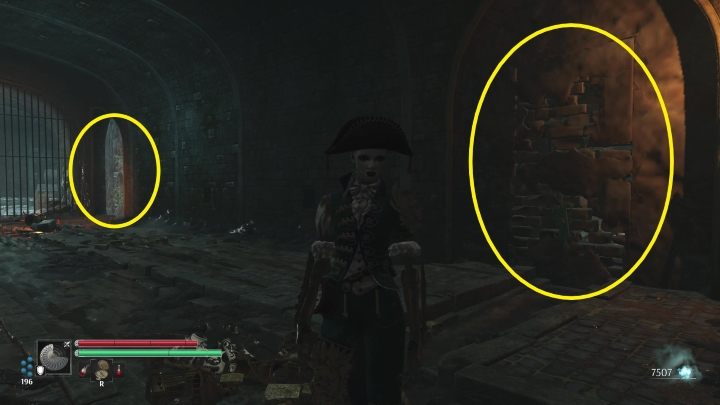 There are 2 exits from it through destructible walls. Choose the right one. The left one is a dead end (a Trumpeter is there). When you are in the right tunnel, pull up to reach the hole.

Walk down the corridor and use the stairs. There you will encounter 2 Trumpeters (learn more about them on the Musicians page) and a Courier. 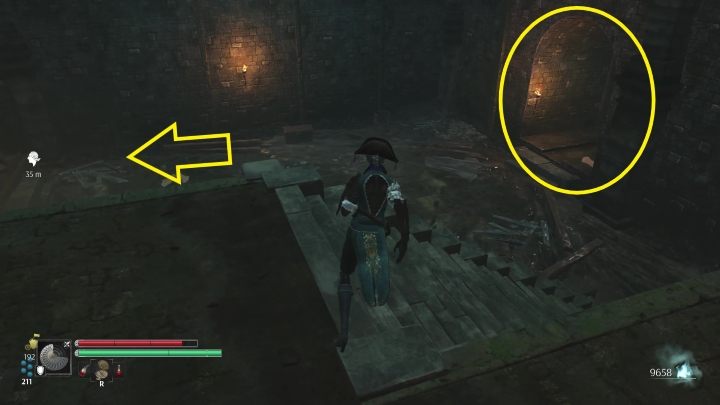 On the right, you will see a passage to the lower part of the sewers. However, it ends with a dead end. You should go to the left. Continue walking straight down the corridor. Unlock the shortcut on the left and pull yourself up through the hole in the ceiling.

Keep going straight - you'll end up in a room with a Lumberer and 2 Violinist (you can learn more about them on the Musicians page). 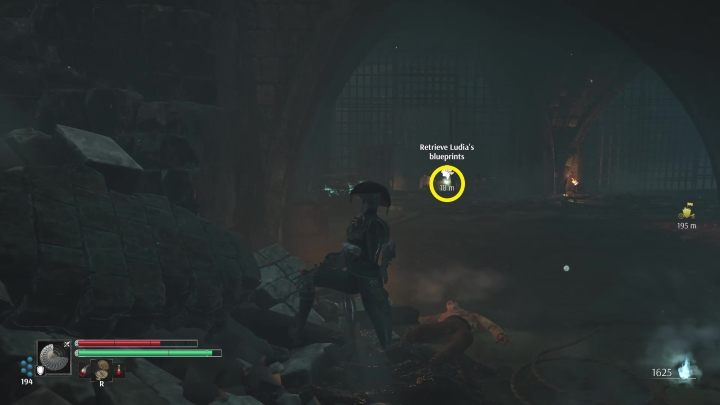 The schematics you need are on the right side of the room - by the body. There is also a chest where a carriage token is hidden.

Head now to the Cordeliers Convent. Talk to the scientists again. 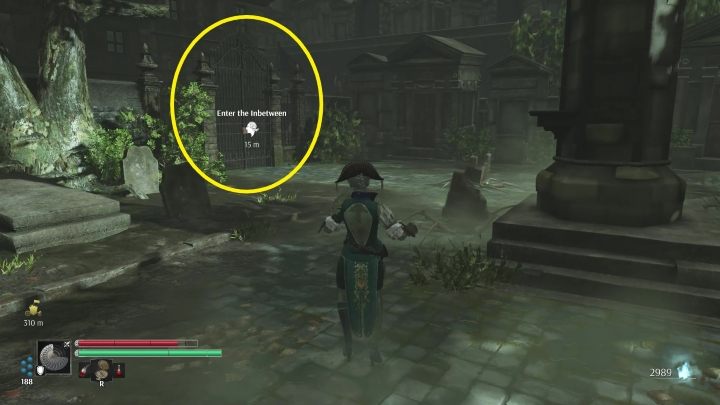 You must go again to the place where you entered Nicolas Flamel's Crypt (it was described earlier on this page). However, do not go underground. There was a closed part of the cemetery near the Vestal. You could have unlocked it by leaving the catacombs earlier. If you have not done it yet, you must go through the catacombs again, as described above. If the shortcut is unlocked, all you have to do is enter the square and open the locked door with the key. At the cemetery, you will encounter a Flame Acolyte and 2 Couriers.

After going through the gate, turn left. Continue heading straight. You will encounter a Violinist and a Courier. At the intersection, turn right and climb the stairs to the square. It is guarded by a Butcher and a Courier. Walk through it. You will encounter 2 Violinists. Follow the path until you reach a Vestal. Along the way, you will be able to unlock a shortcut (in the form of a crumbling wall). 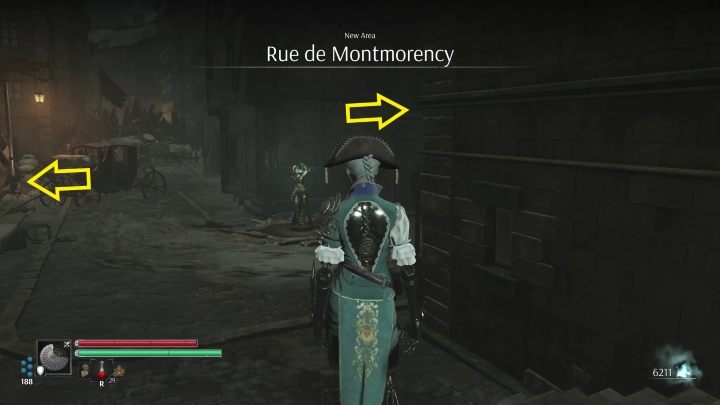 At the end of the street, to the right of the Vestal is a chest with a carriage token. There is a hole in the street in the plaza to the left of the respawn point. Jump down to it. Go through the tunnel and approach the blue light. You will trigger a cut-scene.

Talk to the ghost and return to the Cordeliers Convent. Tell Abbe Gregoire everything. 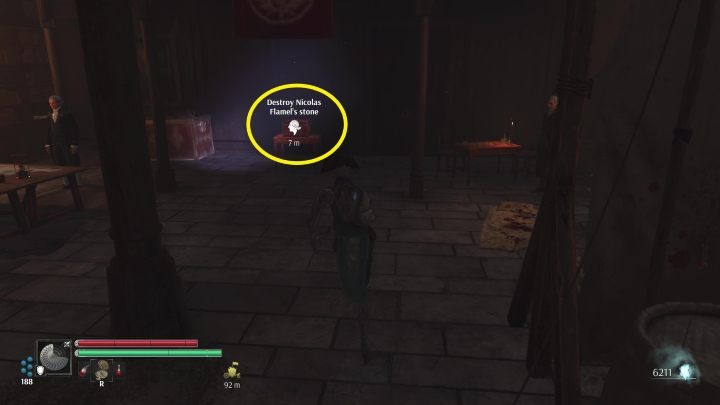 Now interact with the chest located under the wall in the convent. You'll complete the mission.