The experience level of units in Steel Division 2 is a very useful indicator that can make weak units extremely useful forces of your troops.

Each unit has its own experience level with which it arrives on the battlefield. Units do not gain experience during the battle, so recruits will fight worse than the rest of the units throughout the battle. And Elite troops will never lose their efficiency, even if they are damaged. Of course, they still lose efficiency because, for example, they have fewer soldiers or the vehicle has a damaged tower, but experience bonuses are still awarded in full.

Units can have 4 levels of experience: regular, veterans level 1, 2 and 3. Each unit has a symbol of the experience right under its icon (for example, The Red Army's symbol is the star, and the German troops' symbol is the iron cross). During the formation of the battle group, you can choose the level of experience of most units, although level 3 is not available in the usual way. Sometimes your choices will be limited, for example, Ersatzlampe infantry (German 14th infantry division) can only be called in phase A and with the lowest level of experience. The more experienced a unit, the greater the bonus to all its statistics.

The experienced unit will be better, faster and shoot more accurately, and will also endure the combat better (better, morale), move faster, optimize optics, etc. Weapon stats remain the same, but the unit will fight better and use the available weapons. Therefore, it is often worth adding to the group a few more expensive and less numerous units, but more experienced. This rule is especially suitable for expensive units, which makes them extremely useful on the battlefield.

Leaders are special units in Steel Division 2 that can fight and conquer territory. However, the true strength of these units lies in command skills.

Leaders can be infantry units, combat vehicles or tanks (they have a round yellow symbol with a star inside). A unit with this ability opens up a small aura of leadership. Each unit in such area gets an extra experience point. Moreover, units within the leaders' range will be resistant to surrender, better withstand combat stress (morale drops twice as slowly than usual) and will not lose effectiveness behind the enemy lines. Set the leader in combat mode to "respond with fire" so that they fight only when necessary. Thus, such a unit will live longer. 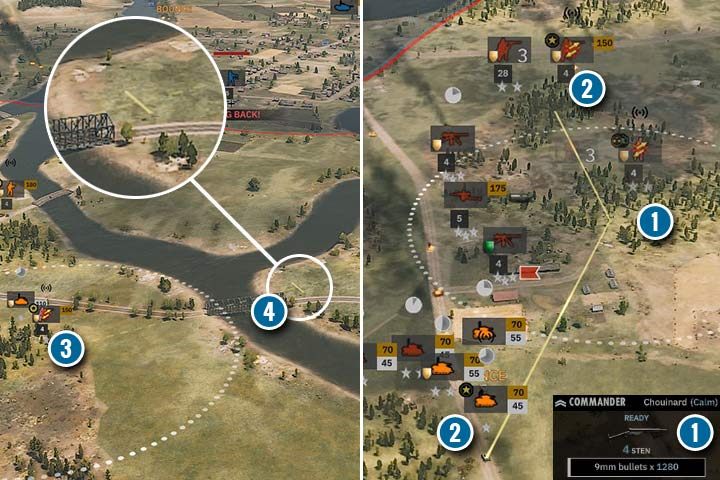 Commanders are one of the most valuable, but inconspicuous units (1). Not only do they spread the aura of command and increase the level of experience, but they also give their bonus to other leaders (2). This can be seen in the yellow lines, which indicate a radio connection. If a commander is too far away (3), he still adds his bonus, but does not use his commander's help. You can see on the map how close he has to go to get the orders from the commander (4).

Moreover, thanks to the leaders, it is possible to raise the experience of units to an otherwise inaccessible level 3. Units with second experience level automatically get another level. Such units will receive the status of elite troops and will be very effective on the battlefield. It is worth to strengthen the tip of your advancing troops, the defense of the strategic point or artillery troops.

The leaders' and commanders' effects are not summed up on other units or leaders!

Commanders - this a special type of leaders. They are expensive units, deprived of the opportunity to fight. Like the leaders, they generate the command aura with the same effects. However, commanders add 2 levels of experience, not 1! Thus, a small group of regular units can easily gain valuable experience. On the battlefield, you can call a small number of such units, so use them with caution.

In addition, the commanders have a radio. If some other leader is within the radio range of another leader or commander, then the bonus +2 experience levels are also active in the aura of leadership of the leaders in the radio area! Thus, it can keep such units in a safe place and still support other units on the map. In addition, leaders can increase the reach of commanders and pass the bonus to the next leaders within their reach. Thus, you can create a team network and transfer the bonus to numerous units in other parts of the battlefield.

Leaders and commanding units can easily make weak units more useful and provide aligned chances of a successful attack or defense. In a cheap way, a large group of troops can fight a better trained and equipped enemy for a long time. Always add multiple leaders to your army, especially the same type of units you have more in your group.