In Steel Division 2, most modes are based on battles. There is no classic story campaign, although there is a special mode of "Army General" and historical battles. Despite these differences, it all comes down to planning a battle group and skirmishes on a random map.

Skirmish - this is one of the most popular game modes. This is the best way to learn the game, by conducting battles with artificial intelligence. In this menu you choose fighting games or you can create your own. In addition to selecting the map, the number of enemies, you can choose the skirmish mode:

Historical battles are still skirmishes, but they have special rules. Such battles try to reproduce the conditions that existed in historical battles. You will receive only two divisions that took part in the battle of your choice. Also, the number and types of troops will be imposed in advance, so you have to command and summon already selected troops. This increases the difficulty because some divisions do not have enough tanks or anti-tank guns.

Strategic points in historical battles look a little different and there are only a few of them, so winning in such a battle is very important. You can only call on troops prepared in advance; management of battle groups is locked.

In historical battles, the main goal is still to capture and save strategic points, but usually there will be fewer of them on the map. On the one hand, it will facilitate the game, as you need to focus on fewer points, but you still need to take care of the rest of the map area, so as not to be cut off or surrounded by the enemy. You can't modify your army and you have to confront the enemy with what you get. The economy is similar to that of a classic skirmish. However, the types of income are also determined before the game, so you have to plan your strategy carefully.

Steel Division 2 offers a completely new mode in the series. Army General is a combination of turn based and RTS games like the Total War series. You have several scenarios to choose from where you need to reach your goal before a certain date.

On the strategic map you can decide how to move your troops, call for reinforcements or strengthen the position of your troops. Each of your units has action points that determine the distance that they can move and availability during combat. You have several divisions under your command and numerous battalions that are part of them. 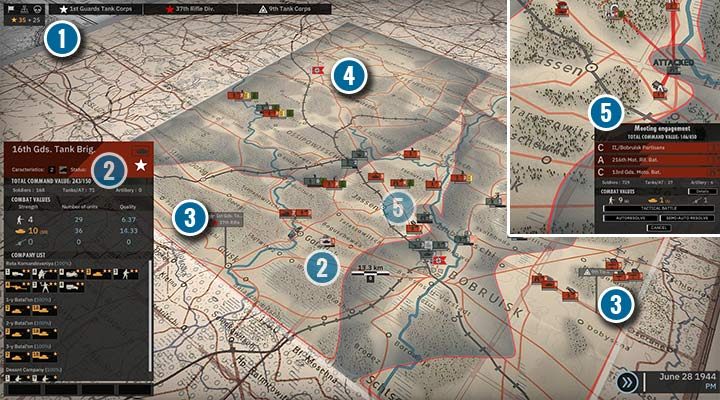 The strategy map has many important elements. In addition to battalions and squadrons, you will see a front line on the level - exactly the same as during the battle. In the upper left corner, there are requisition points and available divisions with reinforcements (1). Each battalion (2) is marked with an icon and a number of action points. There are also points on the map where reinforcements (3) will appear. Mission objectives are marked with flags (4). To start a battle, you must use 1 to 3 battalions with 2 action points (5).

To win a battle, you need at least one army that is close enough to start the battle in phase A and has 2 action points. You can also choose which troops will take part in phases A, B, and C. the Units that are destroyed in the battle will not be replaced or supplemented in any way! Remember this, especially when sending precious heavy tanks to battle. Their loss can greatly affect the fate of the campaign. Remember that planes are not moved like armies, but can still join the battle.

Supplies - a special value, which is very important on the strategic map also has an impact on individual battles. There is the front line indicator on the strategic map, the same as on the tactical map. If a battalion was cut off from supplies, the level of their resources decreases. In the beginning, such units will receive less action points, but the complete lack of supply leads to unit disbandment and excluding it from the fight. Thanks to this, you can easily eliminate many enemy units.

Your army has special points that allow you to summon additional battalions to the campaign area. Every day, each division gets access to new units that you can call up the map. They can only appear at designated points on the map that correspond to the symbol of their division or at specially designated railway junctions. This is the only way to increase the strength of your army. Damaged troops cannot be "healed" nor replenished. The same goes for enemy units, so make smart decisions and take care of the best battalions.