Steel Division 2 is a real-time strategy game, but it lacks the classic base expansion and army recruitment, as in many other titles of this genre. In this game, you create your army before the battle, and then call for reinforcements outside the map on the battlefield.

Each fight is divided into several phases: 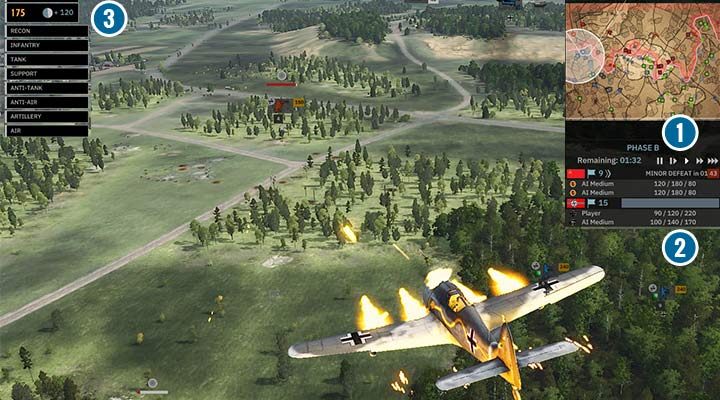 Below the minimap you will find information about the current phase (1). Below is a time flow control bar and number of strategic points in the control of both factions. Next to the names of the opponents there is also a number of requisition points divided into phases (2). You will know how many points every player/enemy will get in each phase. Your current requisition points are in the top left corner (3).

Every minute you get a certain amount of assignment points that you can spend on summoning new units from outside the map or planes. The number of these points depends on the choice of "deployment type" occurring in 4 types:

The numbers in parentheses indicate an influx of points every minute. Each value refers to successive ABC phases. That is, in the case of balanced deployment, you will get 100 points every minute in phase A, 140 in phase B, and 170 points per minute in phase C. Thanks to this, you can adjust your battle group to the cost and number of branches. If you prefer a quick attack on the enemy in the first stage, it may be worth choosing a type that provides the most points in phase A. it is worth experimenting to see which style is most suitable for your personal preferences and the selected division.

Each division has its own ranking, type, name, nationality and a unique symbol.

Planning a battle group is quite pleasant, but also not an easy task. Divisions are divided into 3 types:

When choosing a division, please note the rating in the main menu: stronger divisions have a rating of A, weaker B and C. This does not mean that you cannot win with the help of the other divisions, a-rated divisions usually have a slight advantage in equipment and range of available units than the rest of the division.

In each division you have several categories of troops to choose from and each division has some other troops in those categories. The main support of your battalion will be infantry and tanks. These are the main units, because they take the brunt of the fighting, and it is these troops that capture the territory and move the front line. You need to conduct reconnaissance to quickly engage in battle with the enemy and not to be surprised. Artillery is very useful for destroying fortified defense points and breaking down enemy infantry groups. Armor-piercing guns are necessary in the defense and fight against enemy vehicles. Air force will neutralize various threats by destroying enemy aircraft, bombing villages and forests, and destroying enemy tanks with missiles. 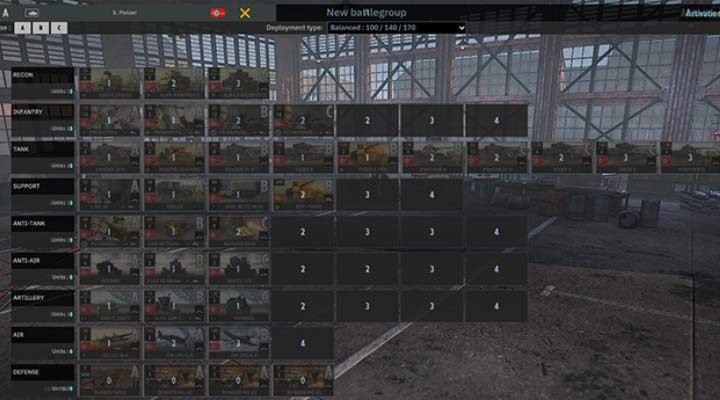 The 5th Armoured Division of the German nation has a lot of slots for armored unit cards. It can also use a lot of artillery, anti-aircraft or armored guns, but it will cost lots of activation points. Aviation is a very expensive business here. It is worth adding infantry to the group, although there is not much room for maneuver here.

Each category has a limited number of slots per branch in each category, which depend on the type of division. Each place is worth a certain number of activation points. The more infantry, for example, the more activation points you have to spend. Some divisions have a lot of cheap slots for units, e.g. the Panzer divisions have even 4-5 slots per one point. Do not invest too many troops outside the division's specialization. It is better to focus on those areas that do not have a high cost - as a rule, there are the strongest divisions of this division. 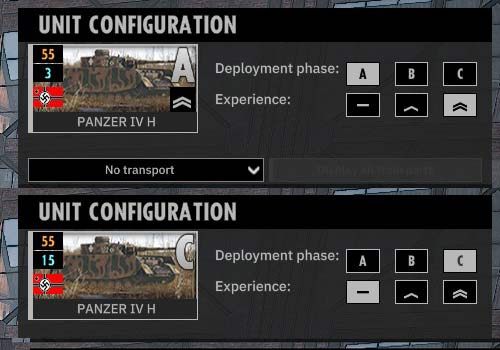 In the 5th Armoured Division I can add Panzer IV H tanks with veteran status in phase A, but with a limit of only 3 units. However, in phase C, they can be as many as 15 such vehicles summoned to the battlefield, only without experience.

Phases affect the number of selected units. The earlier the phase and the more experienced units, the fewer troops you can summon on the battlefield. The later the phase and the less experienced the units, the more units you can deploy. It is necessary to take various decisions, and not to leave all the decision for one phase, for example, calling several seasoned Panther tanks in phase A. You'll probably dominate the A phase provided the enemy does not flood you with cheap anti-tank infantry or send a few planes, and definitely will perform a massive counter-attack a large group of T-34-85. Balance is key. It is worth having some units in large numbers, but a few very strong and experienced units can outweigh the battlefield.