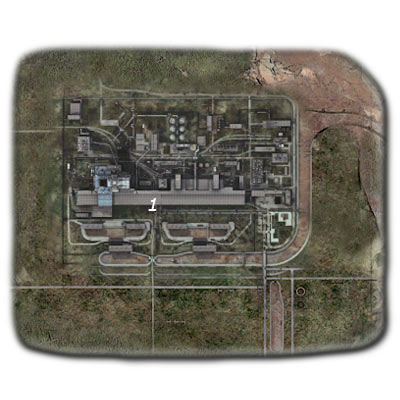 a) talk to other soldiers

Like I've said before, you won't have to spend much time on this map, especially since you won't see where you're going. Your main goal here will be to reach the main entrance to the power plant. There's a sarcophagus entrance nearby and you will have to use it in order to proceed to the next map. The area is not safe, but I'm sure that it doesn't surprise you, especially since we're near the end. You will have to deal with several enemy snipers. You are also going to be attacked by enemy helicopters, however you could try and avoid them. It's also possible to shoot down the helicopters, however more units would have appeared on the map. Once you've reached a certain area of the map, you will have a few minutes to escape this zone.

Obviously you are going to start outside the main compound. You will have an opportunity to choose between several different approach methods. If you want to explore this area, you would have to deal with at least 3-4 snipers (#1). One of these guys will be standing on your right. The rest is in front of you or to the left. Sooner or later, you would also have to shoot down at least two helicopters (#2). As a result, it would be better to avoid these fights and that's exactly what I'm going to explain.

Once you've reached the first large area of the map, turn left and start running towards a concrete wall (#1). You will have to use it for cover. This wall will protect you against helicopter attacks. You will also avoid most of the enemy soldiers, however one of the Monolith thugs is going to be standing on your right (#2). Kill him quickly.

Try making a few steps forward. A small explosion will occur in this area. You won't have to worry about losing any health points. Turn left. As you've probably noticed, there's a small hole in the wall (#1). Use it to enter the main compound. After that, start running towards a small building (#2). You will be quite safe here. Consider saving your current progress.

Don't leave the house just yet. Instead, start leaning out carefully. There are at least two enemy snipers in the area and you will have to kill them before moving on. One of these soldiers is standing on top of the power plant (#1). The rest is to your left, near the southern buildings. Once you've secured the area, start running towards the power plant (#2). It's going to be a safest route to your current destination.

You will come across new enemy soldiers very soon (#1). As you've probably noticed, they're well armored, so you must aim at their heads in order to take them out quickly. Watch out for a single opponent. He will be hiding to your right, near the main wall of the power plant. You shouldn't make any unnecessary stops, because you would have become an easy target. There may be still some snipers in the area. Once you're close enough to the main entrance, a time meter will appear on your screen (#2). This means that you will have to reach the exit in less than six minutes. Thankfully, it's plenty of time.

Keep heading towards your current destination. You will have to turn left at some point (#1). This will allow you to avoid a very dangerous vortex anomaly. Once you've gone past it, go back to the wall of the power plant. Before proceeding any further, you should consider killing at least 2-3 enemy soldiers (#2).

You should be getting closer to the main entrance to the power plant. This area is being patrolled by large groups of enemy soldiers, however you should be able to kill all opponents from a safe distance (#1). You could also hide near the power plant wall (#2). This will allow you to surprise a new group of enemy units. Save your game each time you secure a larger section of the map.

Keep moving towards the main gate (#1). It's not that far, however you must be very careful, so you aren't surprised by any soldiers. The gate is going to be guarded by at least one Monolith soldier. Kill him and enter a large warehouse area. You will have to proceed to the ladder (#2). This will allow you to proceed to the next map. Also, you won't have to worry about the time limit anymore.