1 - Skull (Duty) - He is the most important person of the Duty organization (on this map). Skull will grant with two main quests for this organization. These tasks have been described in my game guide. Skull could also die later during the game, however it won't affect your gameplay, so you won't have to worry about him.

2 - Venya Axe (Freedom) - Sadly, he won't tell you anything interesting. Venya will only try to encourage you to join Freedom's ranks.

3 - Chef (Freedom) - He's also one of the less important members of Freedom, however you will have an opportunity to ask him a few interesting questions, regarding this base and some of the surrounding areas.

4 - You will come across several important characters here:

Egorka Tails (Freedom) - This soldier is guarding the entrance to Freedom's base. You will have an opportunity to talk to him, however this won't be necessary. Once this conversation is over, you will be granted a passage to the base.

Lukash (Freedom) - He is the leader of the Freedom organization. As you've probably suspected, you will be able to receive main Freedom quests from him. Also, killing him will be one of the main goals of the Duty organization.

5 - Cap (Freedom) - He is the commanding officer for a blockade which is located near one of the exits. You will have to talk to this soldier in order to finish the third quest for the Freedom organization. If you're allied with Duty, you must kill him at some point of the game.

1 - This is where you'll start exploration of this map. I wouldn't recommend standing here for too long, mostly because wild boars may appear in this area and you would have to kill these creatures in order to survive. It would be wise to make a few steps forward. As you've probably noticed, some of the soldiers are fighting each other. Wait for this battle to end and check bodies of fallen soldiers for better weapons, ammunition and medical supplies.

2 - This is a fairly small Duty campsite. Obviously, it is one of the most important locations of the map. It doesn't really matter which organization you've decided to choose, you will have to visit this campsite anyway. Sadly, you won't find any interesting objects in this area.

3 - This entrance leads to the main base of the Freedom organization. The base itself is much bigger. You will also encounter a lot of NPC characters here. You may talk to these soldiers, however this is not necessary. There are also a few sniper towers nearby.

4 - This is a small kitchen. Despite what you might think, you should consider exploring this building of the base, especially if you don't have any food in your inventory. Pick up some of the visible objects, so you won't have to buy them later during the game. 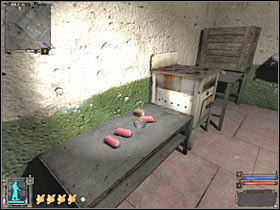 5 - This entrance leads to another collapsed tunnel. Obviously, you would have to deal with A LOT of dangerous anomalies here, however you don't have to explore this area, mostly because you won't find any valuable artifacts there. 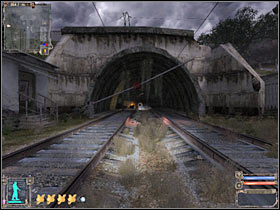 6 - I'd strongly recommend checking this building. You will encounter a few crates. Destroy them in order to obtain new artifacts. 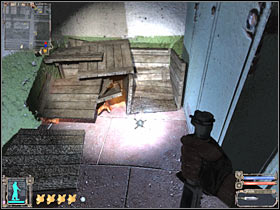 7 - This is the main building of this base. Lukash can be found on the upper floor, in one of the rooms to your left. As you've probably noticed, he's got two bodyguards, so don't even think about killing him.

8 - You will find an abandoned farm here. You will have to visit this place in order to fulfill one of the Freedom's main missions. If you decide to check this area on your own, you will probably encounter a lot of dangerous wild animals.

9 - This is a larger village, however I wouldn't recommend going near these areas. The village is crawling with dangerous mutants and you would have to be very skilled in order to kill all these creatures. As a result, choose main roads instead of moving through the village. 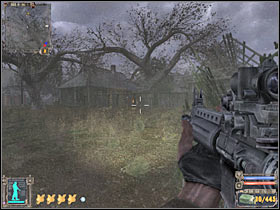 10 - This small hut can be found near the eastern end of the map. There are some swamps nearby. The hut is being protected by a mad Stalker. You would have to kill him from a larger distance. Watch out for mines! They won't kill you, but you shouldn't trip any of the wires. Once you've entered the hut, you will be able to pick up a decent armor - Wind of Freedom Suit.

11 - This road lead straight to one of the exits. You will have to use it in order to reach Red Forest sector. If you've decided to join Freedom and completed all quests, you won't have any problems reaching the exit. If Duty soldiers are your allies, you would have to deal with TWO waves of soldiers. Start off by killing Freedom units. Once they're gone, take care of Monolith thugs. Sadly, you won't be able to avoid them. 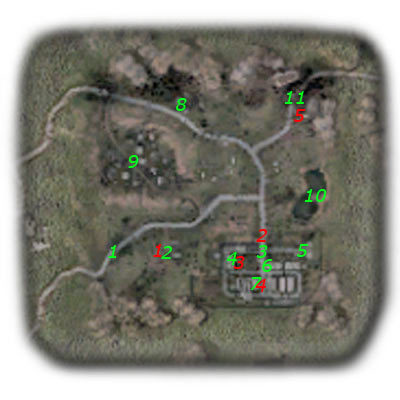