It's time to start the adventure. This Spyro Reignited Trilogy guide contains all the information necessary to complete the trilogy of games with a sympathetic dragon as a main protagonist: Spyro The Dragon, Spyro 2: Ripto's Rage! and Spyro: Year Of The Dragon.

The guide is divided into four parts. In the first part you will find general advice on the whole trilogy. You'll find some basic information to help you start your adventure. The other three parts describe each part of the trilogy. You will find a walkthrough of the different stages, along with a detailed explanation of the most difficult parts of the trilogy. In addition, each of them contains a chapter with answers to questions that may arise during the game.

Spyro Reignited Trilogy is a collection of three classic 3D platformers, originally released on the first PlayStation, whose main character is a dragon named Spyro. The storyline of the games tells the story of his successive rescue operations, in which he saves his friends from the hands of various beings. In order to make this possible, he gains new abilities during subsequent parts of the game. The game has been designed practically from scratch. All stages from the original were rewritten into a new graphics engine.

In this chapter you will find the most important and fundamental information about the trilogy. It is the starting point for anyone who wants to get to know the basic mechanics that are present in all parts of the series. In addition, you will find here valuable info about the differences between the titles of the series.

This chapter is devoted to the first part of the trilogy - Spyro The Dragon. Here you will find a walkthrough of various stages of the game, along with a detailed discussion of the more difficult levels in the whole title. In addition, you will find a section with answers to questions that may arise during your play.

Secrets and collectibles in Spyro the Dragon - Work in Progress.

In this chapter you will find information about the second part of the trilogy - Spyro 2: Ripto's Rage! The information contained in it will allow you to successfully complete the game. In addition to the walkthrough, you will also find all answers to questions that may arise during the game.

Spyro: Year Of The Dragon

This chapter is devoted to the last part of the trilogy - Spyro: Year Of The Dragon. As with the chapters dedicated to the previous parts of the game, you will find here a detailed walkthrough with a detailed analysis of the more difficult sequences in the game. In addition to the walkthrough, you will also find all answers to questions that may arise during the game.

Spyro Year of the Dragon Solution - Work in Progress 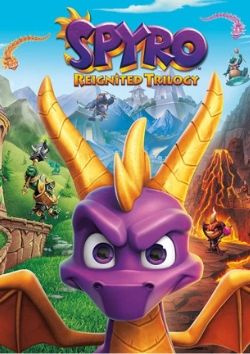 Spyro Reignited Trilogy is a collection of three three-dimensional platform games (Spyro the Dragon, Spyro 2: Riptos Rage!, and Spyro: Year of the Dragon) originally released on first PlayStation during years 1998-2000. The protagonist of these games is a charming, purple dragon named Spyro. The original games were developed by Insomniac Games, the creators of Ratchet & Clank and Sunset Overdrive. The remake collection was developed by Toys For Bob.

The games available in Spyro Reignited Trilogy take place in a funny fantasy world (actually, in two worlds  Artisan and Avalar) and they tell the tale of adventures of Spyro  a small, purple dragon with a brave heart. He saves his friends from various troubles and he faces dangerous witches and wizards.

The games available in Spyro Reignited Trilogy are classic three-dimensional platform games. They are remakes of games that shaped the genre during the nineties. The gameplay focuses on beating levels by jumping, fighting enemies (the protagonist can breathe fire) and solving simple riddles. During the adventure, the players can also gather collectibles and complete tasks for non-playable characters. This is awarded with unlocking special rewards like additional level or true ending.

Each entry in the series expands the gameplay with new features. In Spyro 2: Riptos Rage the dragon gains the ability to swim and climb. Spyro: Year of the Dragon features other playable characters with unique skills  Shiela the kangaroo, Bentley the yeti, Agent 9 the monkey and Byrd the penguin.

It is worth mentioning that the developers from Toys For Bob designed the controls from scratch. Thanks to that, the games support two analog sticks that werent the standard during the late nineties.

The games available in Spyro Reignited Trilogy feature only a single player mode.

The graphics of Spyro Reignited Trilogy are the greatest change in comparison to the original versions of the games. The visuals were designed from scratch  the developers faithfully recreated original levels on a completely new graphics engine, with new models, textures etc. The game looks very impressively.