During this mission you will once again have to help the Morhir elves, and in order to achieve that you will have to journey to Old Haalâyash.

Find the source of the Corruption 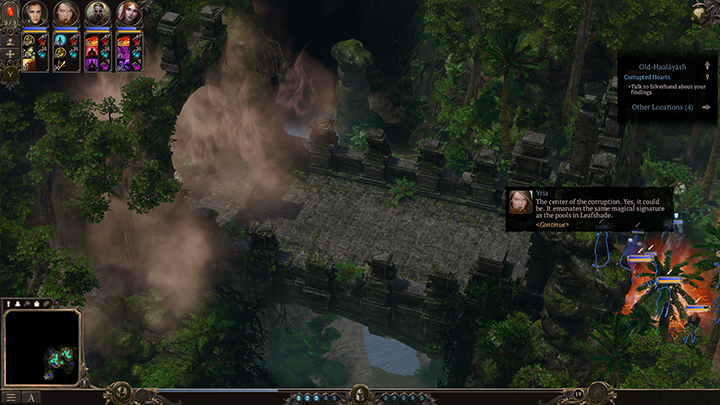 The source of the corruption will not be hard to discover.

At the start of your adventure on this map you will be greeted by Varden, who will be accompanied by a mage called Silverhand. From them you will learn that you must yet again battle the corruption that haunts the elves. You will begin by finding its source - in order to do that you must journey to the south of the map. When you encounter the first group of corrupted enemies, Silverhand will send you reinforcements in the form of several units, which you will be able to use in the consecutive stages of the mission. Continue your expedition south until you reach a bridge, on the other side of which you will find the source of corruption. Return to Silverhand, after a short cut-scene, he will task you with finding the priest of Nor, who is located on a separate map - the Old Monastery. In order to reach this location you must venture to the eastern region of the map.

Locate the priest of Nor

You will find the priest of Nor in the western part of the map, amongst the ruins of the monastery. To reach this location you must follow the path that leads to the north-east, until you reach a stairway which will allow you to get to a higher level - after taking the stairs turn west, where you will find the monastery. If you choose to follow the south-eastern path at the beginning of the map, after some time you will encounter two pilgrims - Nilas and his son, they will offer you a mini side quest The Price of Hope. If you accept and complete this task, you will be able to invite Nilas to Mulandir to serve as a new craftsman. 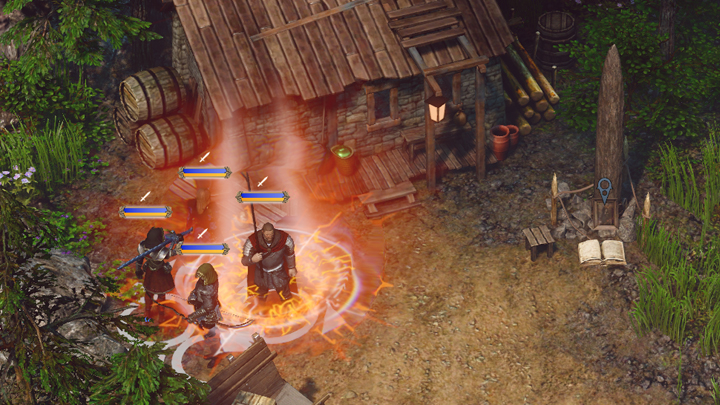 The statue will provide you with information about the elf's past.

The priest of Nor - Raith will be at the centre of the ruins. He will refuse to aid you at first, which is why you will need to find a way of convincing him to change his mind. The Priest of Tiara can help you with this. You will find the priest in the eastern part of the encampment that spans the area around the ruins. You can talk to all of the priests at the camp in order to discover more about the lore of the game's world. The priest of Tiara will tell you that Raith's hut is located at the south-eastern end of the map - set out to find it. Right by the hut you will see an improvised statue (the game will indicate its exact location), which will grant you the information you need in order to convince Raith to cooperate. You can now return to him, and after talking to him, return to Old Haalâyash.

After you return talk to the whole trio - Varden, Silverhand and Raith. After the discussion and a cut-scene you will gain the elvish camp as your base of operations. At the start you will own two sectors, some basic forces (scattered all over the camp, so you will need to organize the troops) and a few buildings, including some defensive structures. Your goal will be to defeat the forces of the Purity, which are located on the map, and also to find four shards of Hibernian crystals.

Conquer the outpost of the Purity 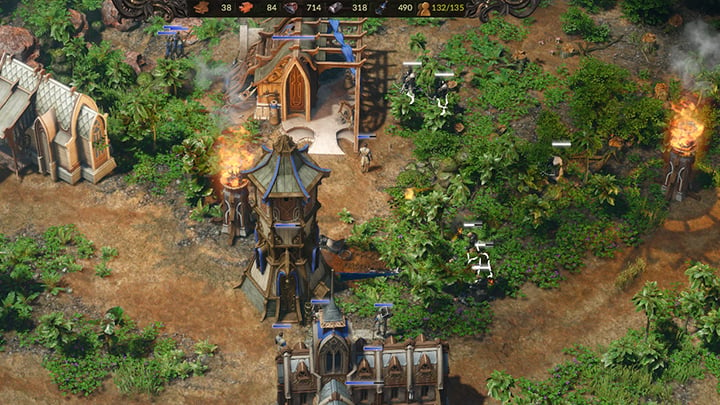 Be vigilant during this battle, as the hostile assaults will be frequent and will focus on several locations at once.

Despite you having quite substantial forces from the beginning, the destruction of the Purity armies can prove to be a challenge. You can attempt a quick assault of their main base, however, this manoeuvre only has a chance to succeed on the lower difficulty levels (the base is heavily fortified from the very beginning). It is crucial that you capture any nearby sectors as soon as possible during the battle. The sector located to the north of your main camp is a good location for you to fortify - it is the most likely target for enemy attacks. You can easily reinforce this sector thanks to the Godstones, which can be found both at the mentioned sector and in your main base. You should also secure the sector to the south, the one positioned close to the source of corruption - it will be attacked by monsters every now and then.

After securing the sectors mentioned above, try to take over the ones located to the north of your positions - it will allow you to raise your population limit, giving you room for a much stronger army, which is a necessary condition if you want to have a chance of overrunning the base of the Purity. Be ready to constantly manoeuvre your armies between different sectors, as the hostile attacks will be frequent and powerful enough to break through defences based solely on towers.

Destroy the source of the Corruption

After you defeat the Purity, you will be able to focus on your main task here - eliminating the corruption. To this end, you must find four hibernian shards. The search will not be very difficult, as the game will mark the locations of said shards on your map. The shards located to the south-east and north-east can be acquired after killing a powerful monster which dwells there. The south-western shard can be found in a chest, while the north-western shard will also be located in a chest, however, the way towards said chest will be blocked by rubble. In order to reach the shard you will have to establish an outpost on the site of the old Purity base and send out workers to clear the obstacle. After all of the shards have been collected, return to Raith.

You will now need a hibernian altar. You will find it in the northern part of the map (you have most likely already encountered it) and you will have to establish and outpost next to it. After Raith performs the ritual, meet him in the south of the map. He will summon a monster for you, which you will be able to control; use it to enter the corrupted area and destroy the corruption's source - it is a white hibernian crystal. After its destruction one more monster for you to defeat will appear - here you can use the support of your heroes and armies. After the monster has been defeated, talk to Arlan, who will be at the site of the battle. When you finish the dialogue return to Silverhand and finish the mission.