You reach Everlight. Your character needs to speak with Clara again about reinforcements. Also, the city can offer you a few side quests. 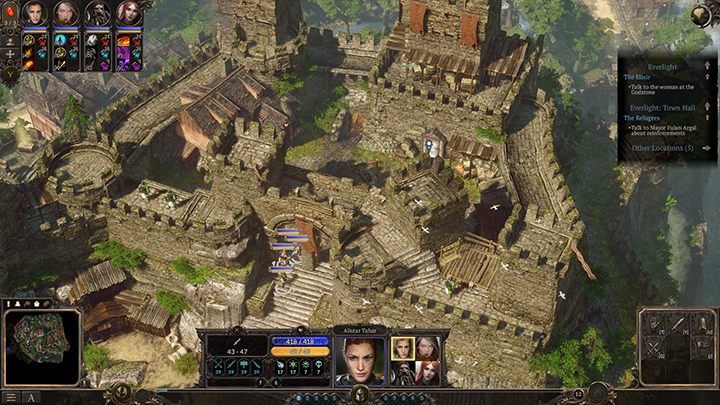 The mayor's house is hard to miss.

Clara is in the north-west part of the city - speak with her. You learn that Fulan Argal, the city's mayor, can support you. Head to his house, it is located in the center of the city. Speak with the guard near the entrance and tell her that Clara sends you. Then, get inside and speak with the mayor. After that you will receive reinforcements.

One of the refugees, who stands near the city's entrance, wants something from you - speak with him. You learn that his daughter is missing and you have to search for her. She is in the north-west part of the map - sadly, she is dead. Also, you will come across a group of enemies. You can avoid them if you don't want to fight. Go back to the refugee and inform him about his daughter's fate.

The Elixir - Side quest

You can find a woman, Rohesia, who stands near the Godstone in the south-west part of the map. She needs help in preparing a healing elixir. You have to collect five ingredients: fangs, a poison sac, garlic, Firenettle and virgin hair. Fangs and a poison sac should be already in your possession. The hair can be obtained from the woman in the east part of the city - the game will point her location. Firenettle can be bought from the alchemist who stands in the south part of the city. The last ingredient, garlic, can be bought from the inn-keeper in the north-west part of the city - near the place where you spoke with Clara. Collect all items and go back to Rohesia, she waits outside the city, south from it. After that you have to visit the mayor once again. This conversation completes the mission.

Vilron can be met near the gate through which you entered the city. He tells you his story and asks you to bring potion to his lover, Jane. Go to her - she can be found in the north part of the city. Then, go back to Vilron. Note, during this quest you can get a new character who will stay in Mulandir.

In the eastern part of the city you can find Hegard, a blacksmith who helps mages escape from being persecuted. Two mages went missing, they were probably kidnapped. Your goal is to find them. They are in the north-east end of the map. There, you can also find their kidnapper. Speak with him and then kill - the fight shouldn't be challenging. Afterwards, go back to Hegard. Note, during this quest you can get a new character who will stay in Mulandir.