This mission has almost no combat at all. Instead, you can explore a lot and learn something about the game's world. Your main objective is to speak with Lord Marshall.

The mission starts inside the barracks. You can go out immediately but examining this location more closely is a better idea. Here, you can find a few items such as potions and documents that you can read to learn more about the game's world.

One of the rooms is locked - you can get inside by leaving the room with beds and turning left - the door will be on the left. The key is located in the opposite room - the kitchen. Behind the locked door you can find equipment and a few spiders. Kill them to get a little bit of XP. Collect everything that you can and go outside.

Head to your mission objective located in the north part of the Greykeep. Enter the Grey Tower and find Angar Arandir (the game will point his location). Speak with the man and then head to Albertus de Reymes. You can find him in the chamber located left from the entrance to the Hall of War. After that you have to go to the city again and then head to its south-west part. There, you can find Sentenza Noria. This completes the mission and you now move to Liannon. 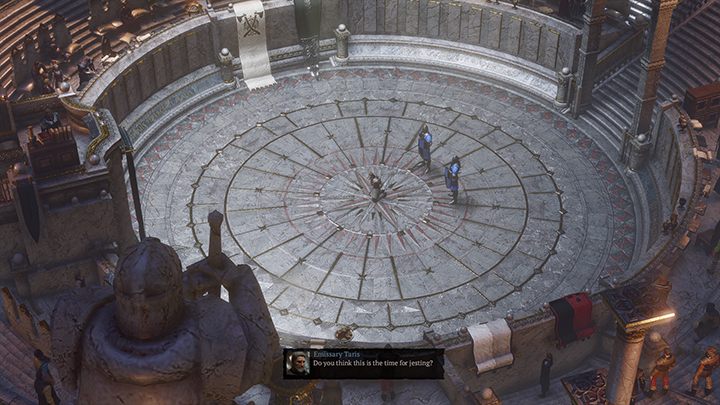 Completing side quests in the Greykeep is a good way to learn more about the game's world.

The city can offer you a few side quests. They aren't very complex, they only let you learn more about the world. Because of that they are all described in one section. Check the map at the beginning of this chapter to find their locations.

Only the Pure - Right after leaving the barracks you can find a priest executing a mage. You can speak with him about his cult.

Prison - debt - Alistair is in the prison located in the south-east part of Greykeep. He is a friend of yours and he owes you money. You can collect the debt and ask him how he is doing.

Training is Key - You can come across a training field. Speak with sergeant Esme. She lets you participate in three training fights. The second battle is the hardest - focus on the two support soldiers of your main enemy, Anselm (you can remember him from the first mission). Remember to speak with sergeant after each fight. At the end of the quest you can choose your reward - click on the list displayed on the right side of the screen.

Aonir's Justice - Hall of Justice is located on the right of where you have to go to continue the main quest. There, you can witness a case against an Elf. After that this short quest ends. You can also speak with Theseus.