On the following page of the Songs of Conquest game guide, we have provided useful information on wielders and spells.

Wielders are your military commanders. They don't personally fight, but they can cast spells and buff your troops, your army's size being also dependant on their skills. 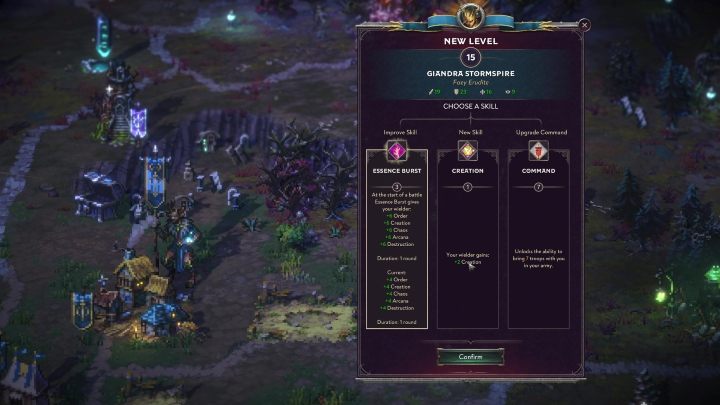 The commanders can level up. Each time they do, they can obtain one of three new skills. You should spend your first level ups on increasing the army limit. Every eight levels you'll be able to choose a powerful ability which significantly affects gameplay. 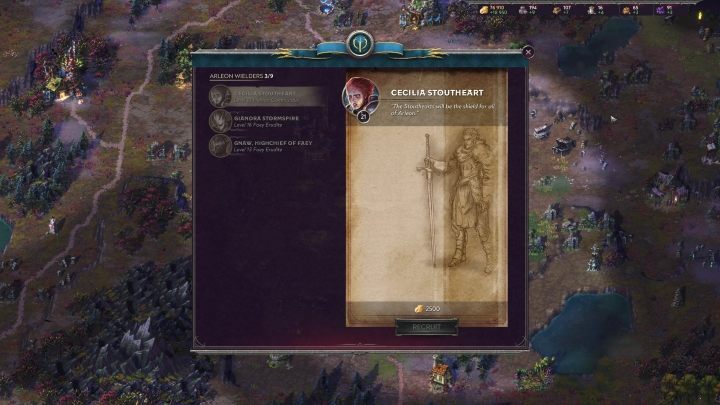 During the campaign only your main character's deaths are permanent, resulting in a game over. Other wielders can be resurrected for a specific price (or for free, if you wait five turns). You can hire a commander again by selecting a settlement and clicking the button showing a silhouette of a man holding a coin. 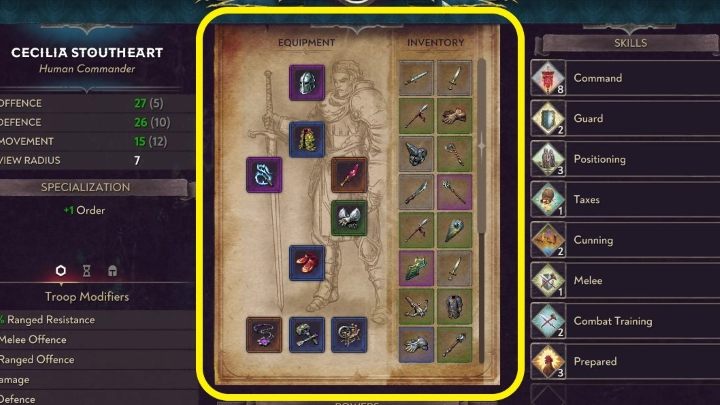 The wielders will come across some equippable artifacts during their travels. You can access the inventory panel by pressing the "c" key (we've listed more hot keys on the Controls page) or by double-clicking the character's portrait in the upper-left corner of the screen.

You can make the wielders automatically equip items in the settings (you'll find more useful advice in the Starting tips section). Artifacts grant various bonuses to your troops. Their power is signified by their color. Purple and orange artifacts are incredibly powerful, blue are strong, green are good while gray are common.

The artifacts can be equipped in specific inventory slots. Your character's hands are where you have the most wiggle room. You can double-wield small weapons, use a one-handed weapon and a shield, or a two-handed weapon.

Not all items support you in battle, others grant economic bonuses. That's why it's a good idea to switch between them according to your needs. Remember to adapt your equipment to the enemy army. As an example, if the enemy uses a lot of ranged units, remember to equip gear that protects you from ranged attacks.

Before completing each mission you should transfer all of your most valuable artifacts to your main character. This will let you carry them over to the next mission. 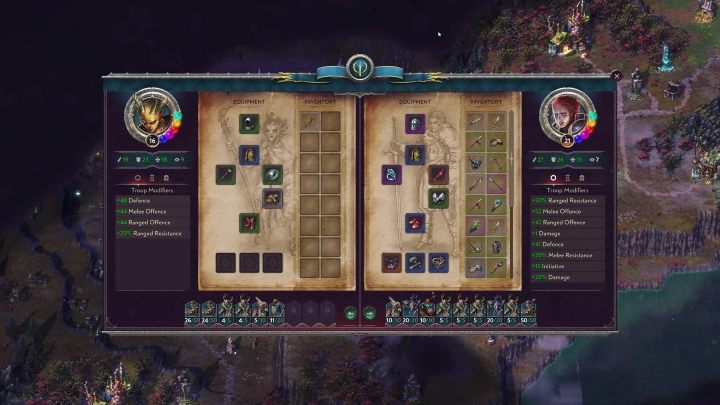 You can exchange gear and military between wielders. Unfortunately, in order to do so, your armies must directly interact. This may be inconvenient if they're located on opposite sides of the map.

Pressing the "c" key, or double-clicking the wielder's portrait in the upper-left corner of the screen, brings up the character sheet. The character's equipment is in the center. We've covered artifacts in more detail in the previous section. 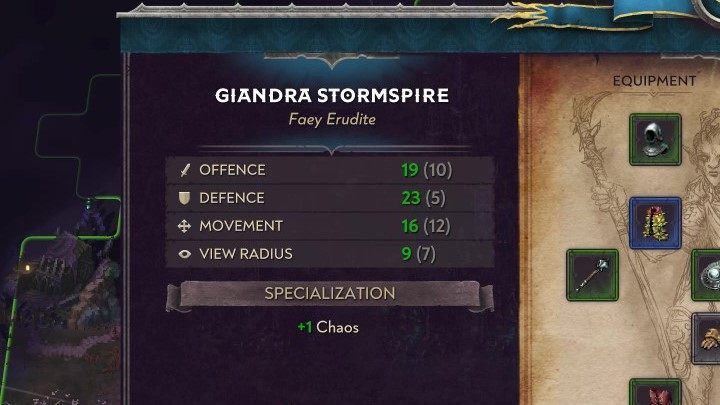 Take a look at the left side of the sheet though. At the top there's information about your character's stats. These are added to their troops' resistances. Below is the hero's specialization and the bonuses they gain because of it. 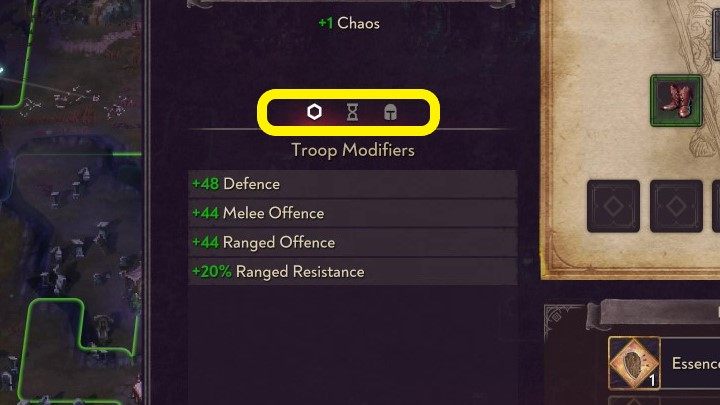 In the lower-left corner there are some tabs showing the bonuses your troops are getting.

The first card sums up all the bonuses from all sources, the second one shows only the temporary ones, while the third one is related to the wielder's equipment. 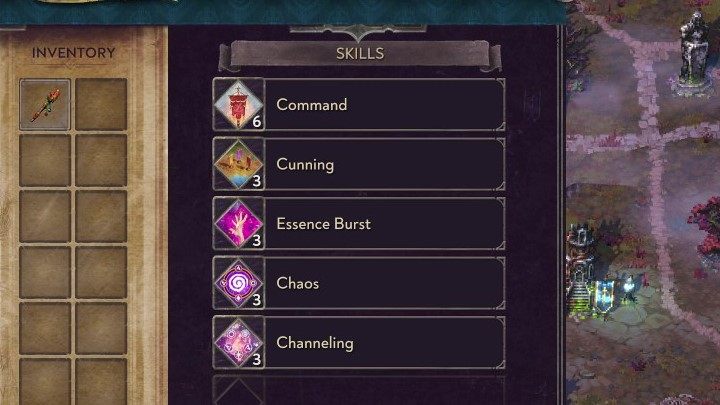 On the right side of the screen you'll find your commander's skills. These are the perks you choose every time you level up.

Underneath the inventory there's a small section dedicated to special powers you get every 8 levels.

Songs of Conquest features a unique spellcasting system. The wielders don't learn new spells as they gain levels, they have access to all of them from the very beginning. You're only restricted by essence, which functions identically to mana points. 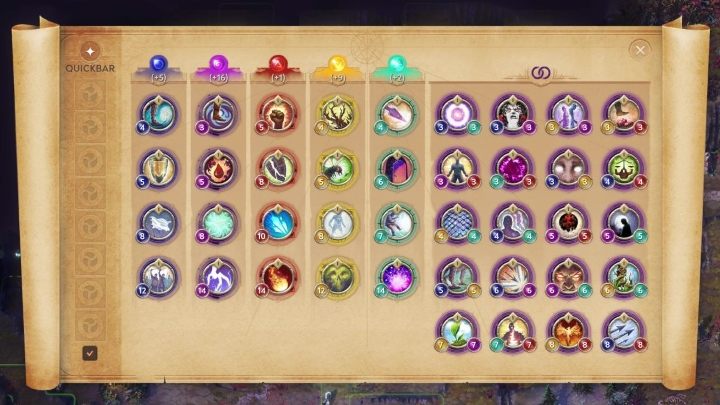 You may cast as many spells as you like during your turn - the only limitation is your essence level. You can display all of your wielder's spells with the "v" key.

There's a quick selection bar on the left. It's useful during battles, as it lets you easily access your spells. The checkmark underneath it means during combat the bar will automatically be filled with the most powerful spells you can cast (based on your essence level). You can disable this feature though.

Most of the window on the right is taken up by the spell list. The spells are divided by essence. This magical energy comes in several types. Each type is responsible for different spells. On the right side of the scroll there's a large group of spells which can be cast with two types of "mana".

It's worth noting that you obtain essence coming from soldiers at the start of their turn, but essence from all other sources is only obtained at the start of a new round.

You can gain magic energy in three ways: 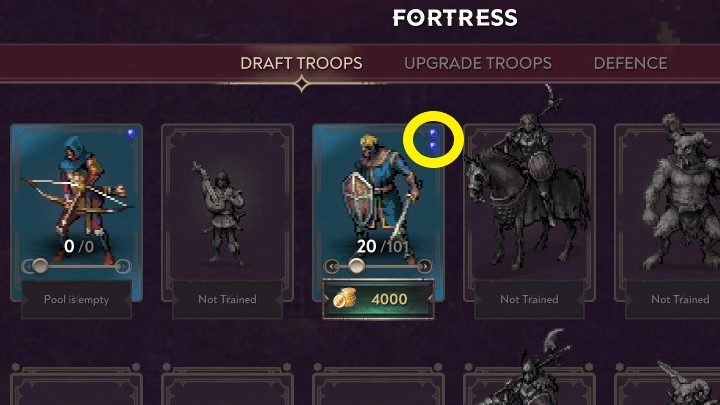 Additionally, some wielders have abilities which can generate mana while sources of power (you'll find more information on points of interest found on the map on the Exploration page) can grant you some bonus essence for the duration of a single battle.