On this page of SOMA Guide you'll find a walkthrough for Lambda Station location. 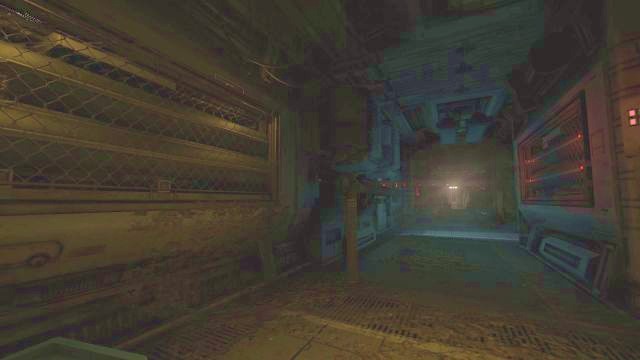 As soon as you set your first steps on the Lambda Station, the screen will go crazy, signaling a threat.

As soon as you set your first steps on the Lambda Station, look around the area. There's a small room to the left of your current position, to which you could look through the window while being in the water - there's nothing to do there however, so just go straight ahead. After a few steps a new enemy will appear in the corridor, and the screen will go crazy for a short while. 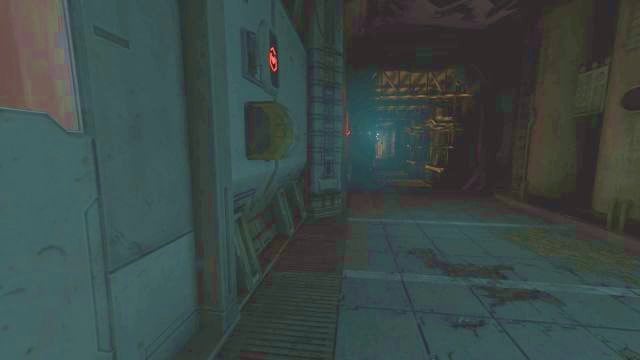 A new enemy appears in the tunnel - avoid eye contact at all costs.

When everything goes back to normal, move a few steps forward, to a place from which you can see doors to the left and right. After a short conversation, Catherine will inform you to not make a ruckus and to avoid eye contact with the new enemy, which will appear in the area while she's talking. Just curl your head to the side and don't move for a short while, and the enemy will be gone. This foe is quite unique, as it does not react to your presence at all - you have to keep eye so that it can locate your position. If you refrain from doing so, it won't be able to harm you, even if u are extremely close to the enemy. 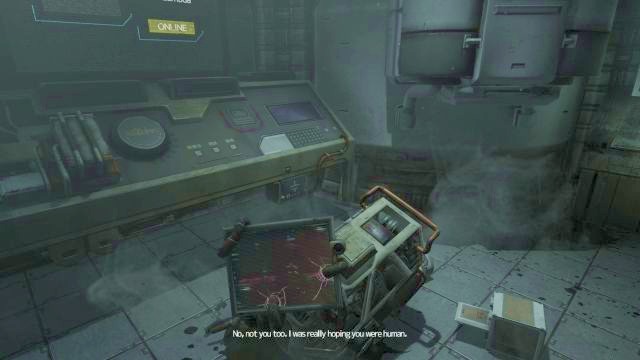 Another robot instead of a human being...

As soon as everything calms dawn, ignore the door on the left and right sides, as they are closed and go straight ahead, and then take a turn to the left, where you will finally meet Catherine, with whom the main character tried to communicate during the last several minutes. The woman, or at least her consciousness, is locked inside a damaged robot, which is lying on the floor after the contact with the recently met enemy. Approach her and start the conversation. 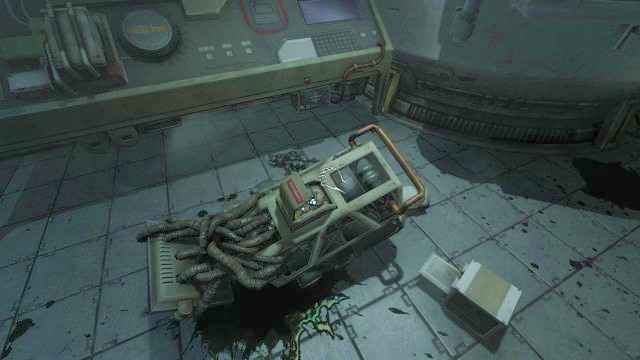 Take out the Cortex Chip from the robot.

After the conversation ends, place your Omnitool to the slot, located to the right of Catherine - a yellow wire leads there. Wait a few seconds and approach the robot to take out its Cortex Chip, which should now be placed into the Omnitool. It will (again) increase the functionality of the tool, and will transfer the consciousness of Catherine into the tool itself, allowing her to communicate with you. 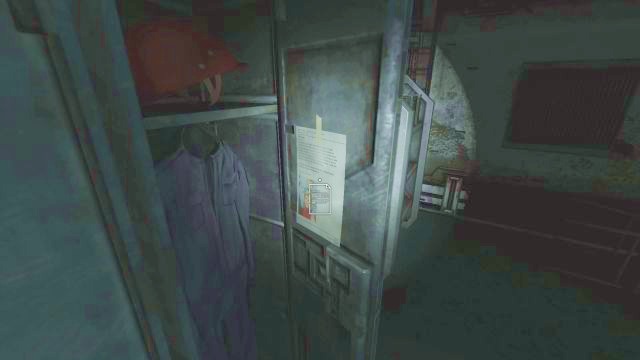 The only collectible on the Lambda Station.

After learning about the ARK project, Catherine will send you to one of the previously blocked doors, right next to the entrance to the Lambda Station. Before you go there, however, it's worth to take a short detour. Leave the room and go straight ahead, where another room awaits you. Inside one of the closets, located to the right from the entrance, you will find a note which can be read. After a short while an enemy will start bumping in the window, so just ignore it and move through the other door. 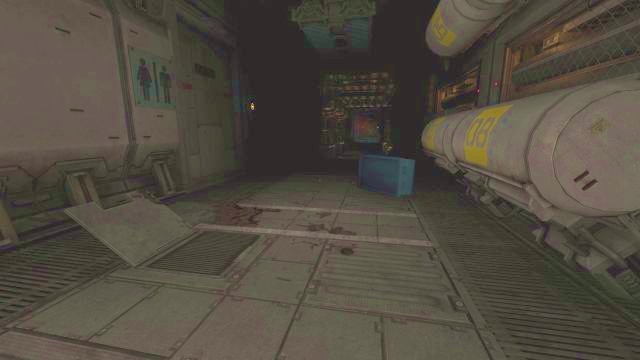 The remains of a toilet on the left side contain a growth, which can be interacted with.

Another encounter with the enemy awaits you here, so just keep your head low, look at the floor, while turning yourself back at the door through which you've just travelled, and the enemy should be gone after a couple of seconds. Afterwards, go straight ahead, take a turn to the left (ignore the darkness on the right side - it's a dead end), and then turn to the left again. On your left side there's an entrance to a toilet, where a growth can be found to interact with.

In search of the ARK 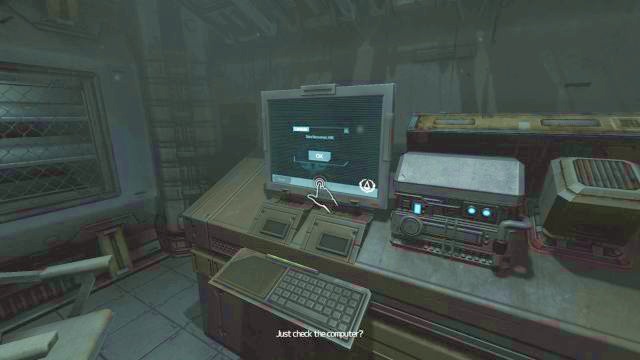 And here's the computer you must interact with.

Leave the toilet, turn left and go straight ahead, until you reach the pair of previously locked doors. Enter the room on the right side and then activate the computer inside. You have access to a few tabs here. The first four are used only as an additional source of knowledge about the game (which should be looked through and listened to!), but the most important tab is the last one, called ARK Tracker. 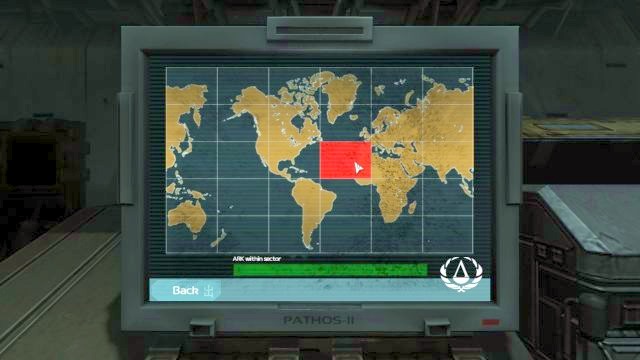 You will have to scan a little now - if you don't want to find the solution with the "trial and error" method, you should do the following: 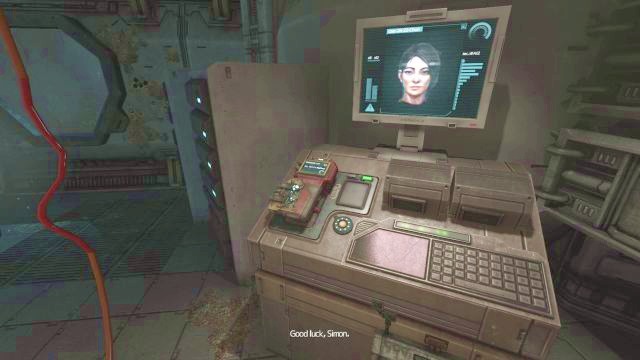 Don't forget to pick up your Omnitool!

The puzzle will be over and you will learn about the next goal of your journey - Station Theta. Before you go there, however, you have to pick up your Omnitool. Leave the room and ignore the one on the opposite side of the corridor, as there's nothing to do there. Go left, enter the room in which the Omnitool is located, pick it up and then leave Station Lambda, by using the mentioned tool. 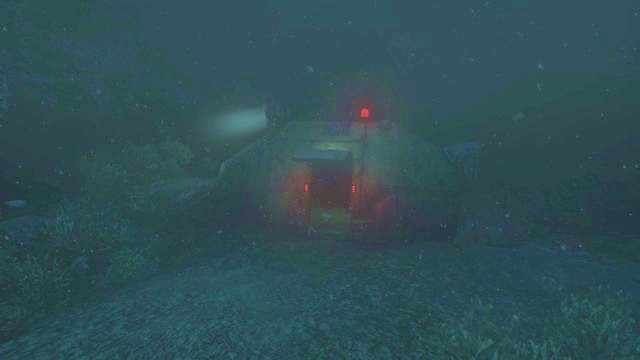 Now you must travel to the small emergency shuttle (which was mentioned in the previous chapter), which is located directly in front of the entrance to the Lambda Station. When you are inside, place the Omnitool in the socket and wait for Catherine to turn on the vessel. As you have probably guessed, it will end in a failure, and you will have to look for another emergency shuttle, inside the CURIE shipwreck. 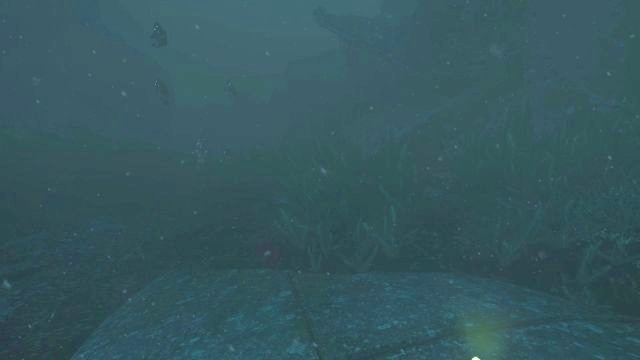 A sudden return of the enemy.

Pick up the Omnitool, leave the shuttle and go left. Go straight ahead (the robot above you is neutral, so rest assured), until you reach a line of signal lights, leading ahead. Go along them, but prepare yourself, as the enemy will make its appearance again. Look at the floor and wait for the enemy to disappear and then continue your journey. 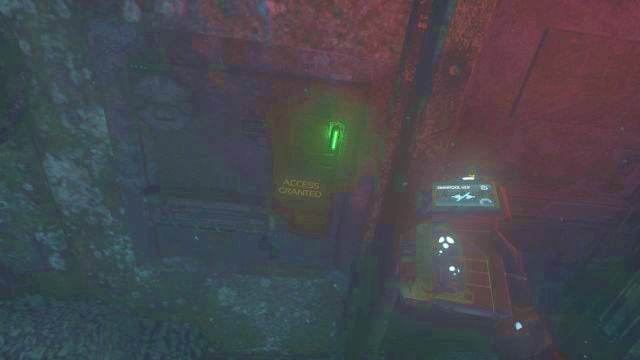 The entrance to the CURIE shipwreck.

You should soon arrive at the entrance to the CURIE shipwreck. Open it up by using the Omnitool and then get inside.