On this page of SOMA Guide you'll find a walkthrough for Upsilon exterior location. 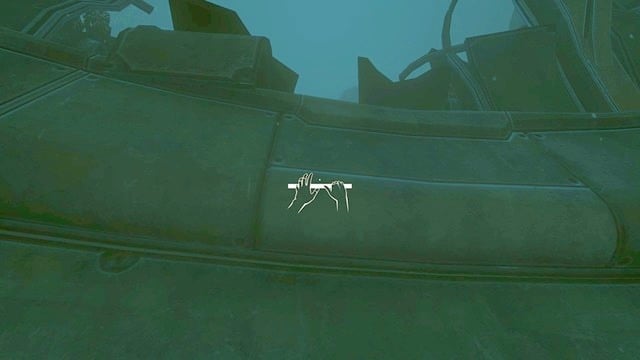 The main character is located under water, but he moves as sluggishly as on the land.

After regaining consciousness in the water, you will be able to freely move in the new environment - the main character can now breathe under water. Additionally, you will now have access to the flashlight, which can be used from now on - despite the fact that the game won't inform you of it in any way. It won't really be useful during this chapter, but later on it becomes almost mandatory tool in your arsenal. After you've become familiar with the new method of movement, climb up through the hole in the dome, by pressing the interaction button. 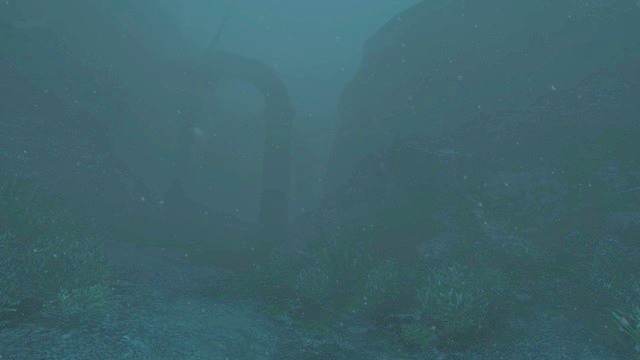 Ocean depths are certainly delightful, but are also extremely linear.

Despite the fact that you are currently on the bottom of the ocean, this location is one of the most linear in the whole game - all you basically have to do now is to just go straight ahead. And you should start doing so - head towards the red lights in the distance. The fact that you are travelling in the right direction is signaled from time to time by lamp posts turning on. Ignore the nearby door, as you won't be able to open them. Continue your journey until you reach an arch-like structure - as soon as you get there, the game will be saved. 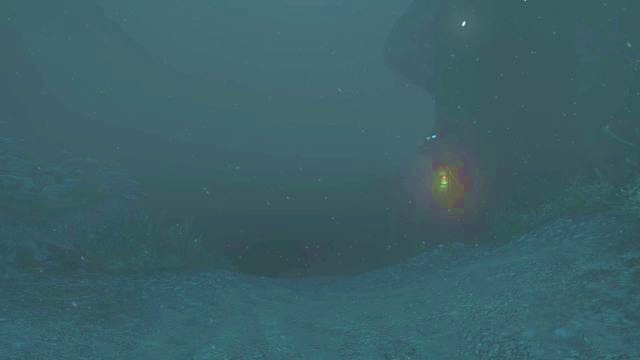 Data Buffer - one of the few secondary activities in the area.

By continuing your march, you should soon arrive at a place at which a Data Buffer is possible. After you've done it, move a little further, go past the lantern, which will light up as soon as you get near it, and soon you will be at a more open space. 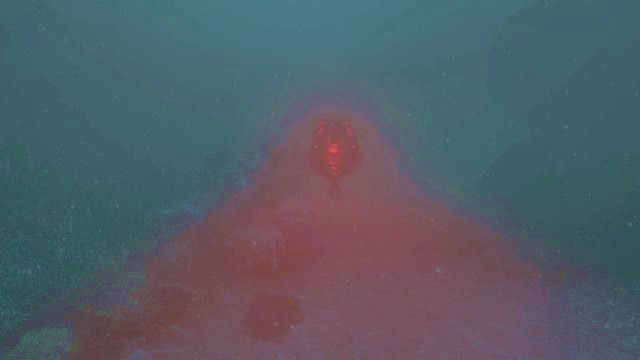 New enemies are blind as a mole, but they have the ears of a bat.

You should now start moving a little more careful, as a new type of enemies will be present in the area. Those emit a faint, reddish light, in a small radius before them, and as soon as you are seen by them you have several seconds during which they will verbally "taunt you", after which they will initiate an attack. Their biggest flaw is a severely limited vision - they are able to notice the main character only from an extremely short distance, so it's fairly easy to just avoid them. However, you should watch out for their hearing - moving around them in any position other than by crouching, even while they are several meters away from you, will certainly get their attention. 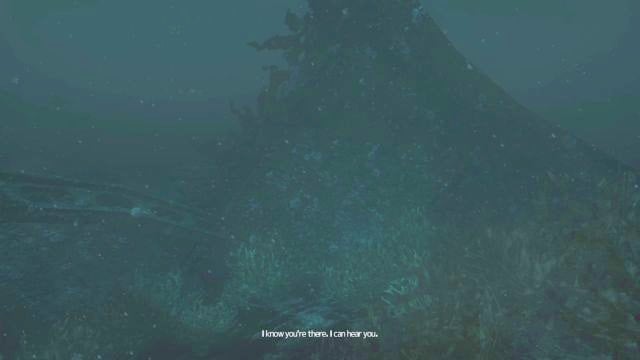 Even a perfect hideout won't help you much when you are making a ruckus.

Wait for the enemy to move away a little, and then hide behind cover, which will protect you from its eyes. Wait until the enemy swims in the other direction and then get out from the cover and continue your journey. 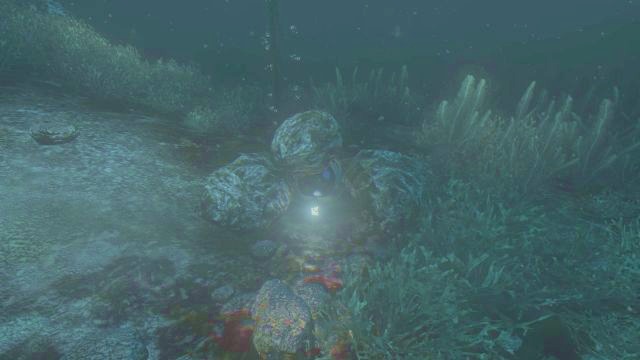 This little fellow will light up the area ahead.

You should be able to see a building with the "Upsilon B" sing on it. To the right from the sign you will notice a faint, flashing light - it's a small robot, crushed under rocks. Get them off of it, dragging them away with the interaction button to set the poor little thing free - rest assured, the robot is friendly towards the player. It will light up the area ahead of you, so moving around the area should now be a lot easier. 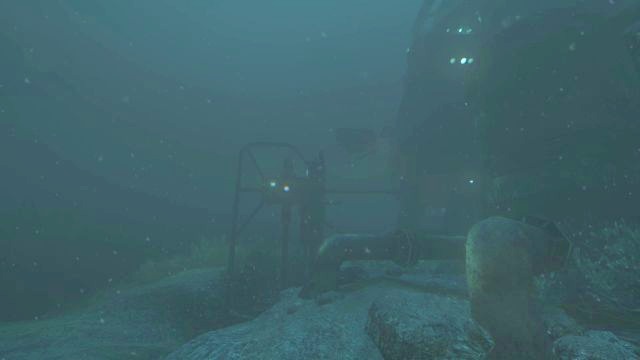 "Banging ones head against a wall" takes on a new meaning...

Continuing on, you should arrive at a crossroads - one way will be leading to the left, while the other to the right. Ignore the right one, as it will lead you to the same place, but you will have to sneak past an enemy there. Go left, and then continue straight ahead. 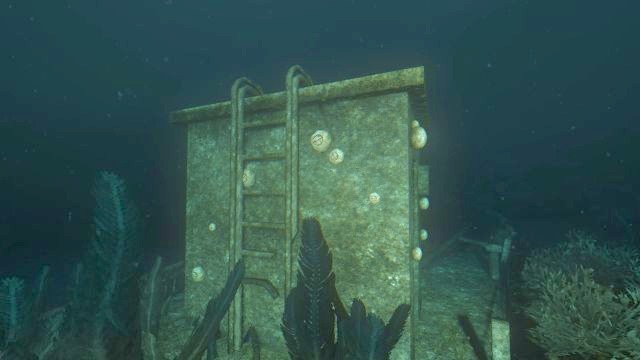 Hide behind the terrain obstacle and wait for the enemy to move away.

You should soon stumble upon another enemy patrolling the area. Hide behind a fragment of a sunken ship (you will be able to recognize it by a ladder hanging on one of its sides), wait for the enemy to swim to the other side and then quickly leave the cover and move on. 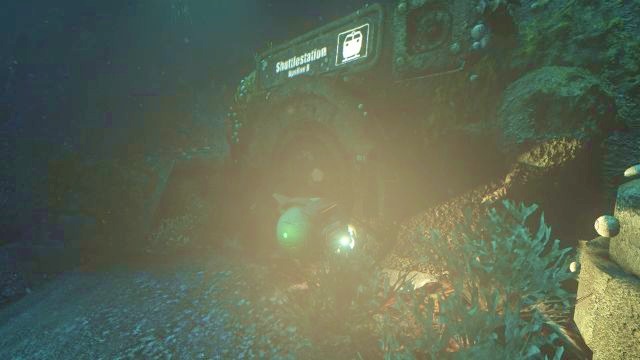 Your robotic friend is more than just a mobile flashlight.

Your underwater journey slowly comes to an end - there should be an entrance with the "Shuttle station Upsilon B" sing on it. Approach the entrance and wait for a few seconds until your robotic friend opens the passageway. All that's left to do is to get to the door, open them by pressing and holding the interaction button and swimming inside. 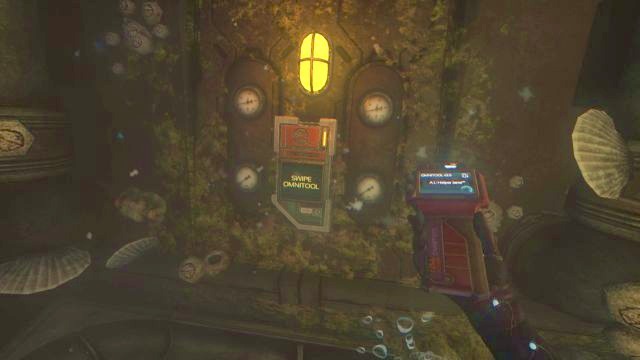 It's time to get rid of the water.

After entering the room, swim towards the panel with the "Swipe Omnitool" inscription on it and press the interaction button to use the mentioned tool in order to get rid of the water. Afterwards, your underwater escapades will come to an end and a new passage will open.