In this chapter of Civilization 6 game guide you will find description of Maori empire. You will learn more about the unusual traits of this nation and you will find advice related to expansion. You will also read about Kupe's skill and about the Marae unique building in culture district. 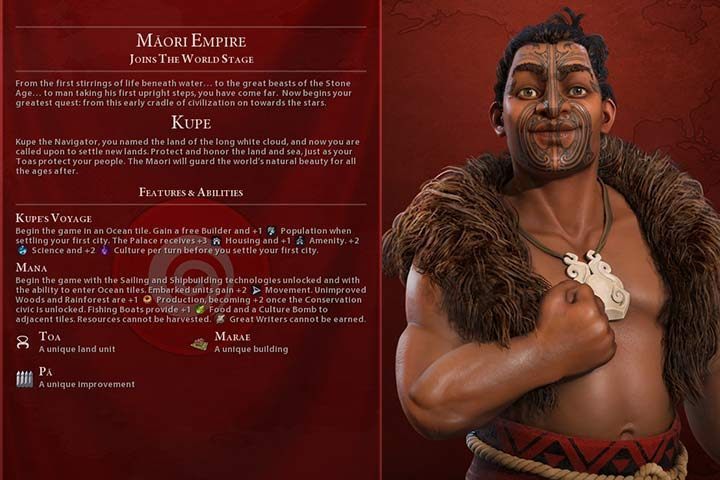 Maori is one of more unique nations available in the game. It is the first civilization that doesn't start on land! Beginning in the middle of ocean has advantages and disadvantages - it all depends on the generated map. On some maps you will be looking for a piece of land for a long time and on others you will quickly find a good continent or island to settle in.

A good place to settle in should feature large quantities of forests, sea resources and high attractiveness. Your shipped units have movement bonus - this will enable you to explore the area faster than your rivals. Maori start the game with Sailing and Shipbuilding technologies unlocked. This enables this nation to quickly improve sea fields and to start building their fleet. A culture bomb after creating fishing boats will quickly increase your territory. This bonus is very useful early in the game, but later will become less important. Remember that increasing the borders in this way won't increase the control area of your nation beyond the maximum range of your city (three fields from the center).

Maori have a small bonus for science and culture that is active until they build their first city. This bonus enables them to keep up with other civilizations while looking for a good spot for the first city. Free builder unit enables you to quickly upgrade fields with strategic or luxury resources. This will enable you to make up for the turns when your rivals managed to build something or upgrade territories around their cities.

Toa is a strong military unit that can fight stronger enemies. Their abilities can reduce the strength of enemy units. For a long time they will stand their ground even against stronger units from newer technology areas. Ranged attacks will be their only weakness. Additionally, each squad can create one upgrade - Pa. It is an unique type of fortifications that speeds up the process of healing units on the field with Pa. Building these fortifications with wisdom will enable you to defend from stronger enemy for many turns.

Maori don't need to build sawmills in forests and jungles to obtain good income from these fields. Marae, their unique building, takes care of that. It replaces amphitheater in culture district, but it lacks slots for Great Works of literature and it cannot generate Great Writers points. Marae provide +2 to culture and faith (and later +2 to tourism) to all traits of the city territory that can be passed through - jungles and forests.

If you encounter large number of such fields in one place, you should definitely create a city there. This will enable the city to quickly become larger (culture bonus will enable you to speed up the development of borders of the city) and become a powerful source of culture or faith (it will make it easier to train missionaries, naturalists etc.).

Think about the combinations you can achieve thanks to Marae. For example, if there are many fields with jungle, you should create an entertainment district and a Zoo in the city. In addition to culture and faith bonuses, these fields will also increase your income with science points. Other combination is building national parks on fields with forests. They will still generate income despite the fact that you won't be able to upgrade them and additionally you will receive a bonus to tourism and amenities.

Maori have some weaknesses as well. The lack of access to gaining great writers makes it harder to gather additional culture points. Avoid building wonders or selecting doctrines that help getting great people related to that.

The greatest disadvantage is the lack of the possibility to remove additional resources from the map. Frequently you will have limited expansion options because you won't be able to build in such places. Because of that, first you should check the area and then plan where to build districts, wonders and new cities. You should also sometimes place a new city on additional or luxury fields so that you can slightly increase expansion options and free some space around the city.

Maori is a civilization that can quickly become the leader in a few disciplines. Bonuses to production from forest fields will speed up your growth without making you change the areas around the city for much of the time. Culture districts will provide great income of faith and culture, giving Maori strong chance for winning in these disciplines. Unusual starting spot will add some random factor to the game, so not every match will be "fair". It is a good choice for a peaceful playthrough, for culture/religion victory, and for military conquers - especially during the medieval age thanks to Toa units.