In this chapter of Civilization 6 game guide, you will find a description of Mali Empire. Here you will learn more about the advantages and disadvantages of this nation. Additionally, you will discover how to use the unique unit and the business district of Suguba. 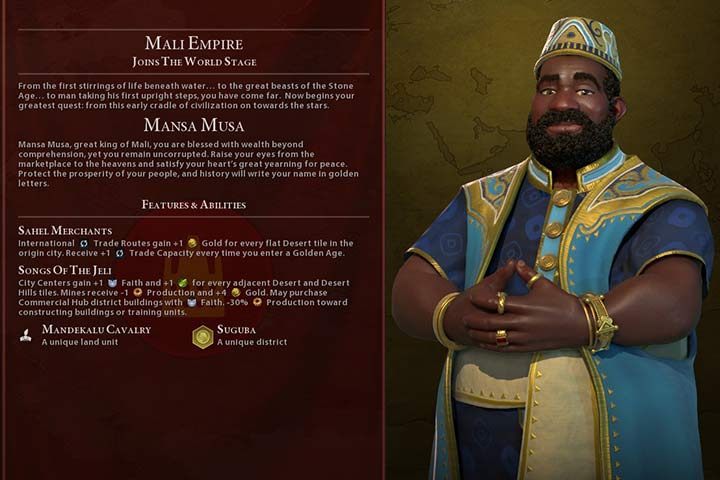 When you play as Mali Empire, then everything revolves around money. The whole structure of special skills, unique unit and district are focused on showing the great richness of Mansa Musa.

Let's start with the greatest weakness of this nation - your cities will have 30% lower production when creating units and buildings (what's interesting, this is one of the few nations that have a negative special trait). Early in the game, you will be developing slower than other nations. Because of that, the first age will be always challenging. Your opponents will create fleets and armies faster than you. During this time, Mansa Musa will be dependent on gold. If it is possible, buy expensive units for gold - for example, settlers. Production penalty doesn't affect districts, so it is a much better idea to focus on building such objects and making sure that the city is growing so that you can place as many of them as possible.

Despite this weakness, the strength of Mali lies in gathering gold - thanks to the mines, Suguba special district, and trade routes.

Creating upgrades of mines provides different profits than in case of other nations. Each mine (it doesn't matter if it's located on a hill with a resource or not) provides 4 pieces of gold and +1 production bonus. This enables the city to quickly increase income at the cost of production that is weaker in case of Mali due to their special trait anyway. Despite that, technologies that increase mine production in further ages can still impact this upgrade. The only problem is that you won't be able to fully take advantage of Mali productivity potential, especially early in the game.

It is worth adding that recruiting governor Reyn is a perfect setting for Mali Empire. Not only does she double the income from districts (which makes the above described combination of districts and bonus from the doctrine even more powerful) and the income for each citizen of the city and from unused fields in the city, but he enables you to expand districts faster as well. She is the only governor that enables you to buy districts for gold. Her presence can provide a rapid growth of a city and construction of a few districts in a single turn! It is a very powerful skill for Mali Empire that has trouble with production and surplus of money.

Buildings in the business district can be bought for faith since the beginning, and everything you buy for gold and faith in a city with Suguba is 20% cheaper. Not only the base price of building is smaller, but when you pay with faith points instead of gold you additionally gain a discount for other shopping in the city as well. Gold can be spent on other things, for example buying military units or merchants and faith can be used to quickly upgrade the district. During the early ages, you should focus on reaching the golden age - in early ages it frequently features a bonus that enables you to buy civil units for faith. It is also a great time to buy large quantities of settlers. Their price is frequently three times lower when you pay with faith instead of gold.

The most important thing related to gathering gold is creating cities on desert. Mali trade routes from city to desert provide additional piece of gold for each desert field in the border of the city. Desert mountains and floodplains also count to this bonus, and districts, wonders and upgrades on deserts don't block this bonus. You don't need to construct all or majority of cities on deserts. Even a single desert city is enough if it is placed on a very large desert. If it is possible, build a port, a canal and/or tunnels to earn even more from trading. Each such object will increase the gold income from each trading route. Optionally you can build Petra in such city to take more advantage from desert fields that aren't very profitable. You should also look for desert with a wonder, with a river with floodplain, or one that was fertilized by a sandstorm. This will change your city into a real trade center.

When playing as Mali you will frequently start on a desert or near large desert areas. Trade routes from such city can provide 15-20 pieces of gold even during the early phase of the game and later even 30-40 pieces of gold when all areas of the city are used. It is worth mentioning that in addition to bonuses for neighboring Suguba and holy sites, the city center also receives +1 to faith and food points for each desert field. Thanks to that you can create your own religion faster in order to increase the income of faith points. These faith points can then be used to upgrade Suguba.

The final advantage of Mali Empire is special unit - Mandekalu Cavalry. It works slightly like a land version of Phoenicia's Bireme. These riders protect merchants from plundering by enemies if they aren't further than 4 fields. In addition to that, each unit defeated by Mandekalu is a source of profit - its combat strength is transformed into gold. It is a great way to improve the budget by attacking a gathering of barbarians (you can even decide not to take over the bandit camp and let it deliver new units to fight), defenders of independent cities or some city state. As a last resort, you can declare a war against a weaker nation (militarily or technologically) only to eliminate their units with Mandekalu. You should have the doctrine that increases combat strength active, for example the one in which wounded units don't receive strength penalty, or the one where units don't have penalties when fighting nation that has different religion, or one that provides more profits for defeating units from older technological age.

Mali is an unusual nation that is completely based on gathering gold. When playing with this nation, the beginnings are difficult and they strongly depend on where you start. Lowered production will be always a problem. However, after the first troubles Mali Empire gains momentum. If you will successively increase the number of merchants and you will start a large city on a desert, your profits will quickly fill your vault. Use the gold to quickly build in cities, to hire armies of the state cities, to create trade deals and for diplomacy that will give you more impact on international policy and world congress.