Seven Ashina Spears - Shume Masaji Oniwa is another boss you could have face within the first few hours with Sekiro: Shadows Die Twice. This enemy wields a long spear which gives him great reach. Here, the mini-boss will be more aggressive. Below you will find tips on how to deal with this enemy.

Leave Ashina Castle and go down; when you are at the bottom, turn right. Go around the NPCs fighting with each other. You will reach Ashina Reservoir Sculptor's Idol. This path leads to the final mini-boss and the secret passage. You can go there immediately and avoid the mini-boss - he is optional.

Up to this point, the suggested strategy for Seven Ashina Spears enemies was about using Mikiri Counter and, optionally, fire. In this case it also worth to use Flame Vent.

Start the battle, making your way to the boss and his assistant. Use Gachiin sugar. This way you can critically hit the boss or kill his side kick. Personally, I prefer to fight against one opponent, so I recommend to defeat the boss' vanguard. In addition, by using the fatal blow you may confuse the boss and hit him with some damage.

The fight is mainly based on performing strikes and evasions - the enemy uses critical hits quite often that can be blocked with Mikiri Counter. But be careful - this opponent is prepared for your counters and he can "counter your counter", so be ready to dodge at any time. 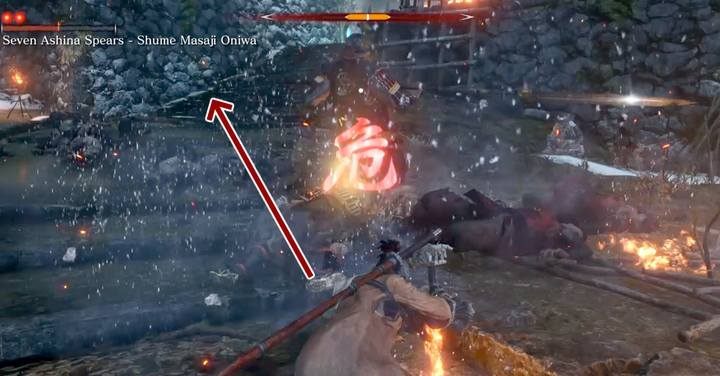 In addition, when boss uses combo attacks (which are easy to miss) - the sword blows that end with a strong hit and a critical strike - dodge and move diagonally right (and forward) to get behind his back when he returns to his original position. You can use this moment to use your best strikes and slash the boss from the back: for example, Sabimaru, Fire Vent, Spear or any special combo-attack you prefer.