This page in our guide to Sekiro: Shadows Die Twice contains the strategy for the fight with the Headless in Ashina Outskirts. We have described two different paths leading to the boss's lair, and we gave our suggestions on how to prepare Wolf for this fight.

Headless enemies appear in a few locations. They differ in strength and they are found in various areas (some Headless are encountered under the water). Descriptions of fights with other Headless are on the Bosses page.

How to prepare yourself for the fight with the Headless? 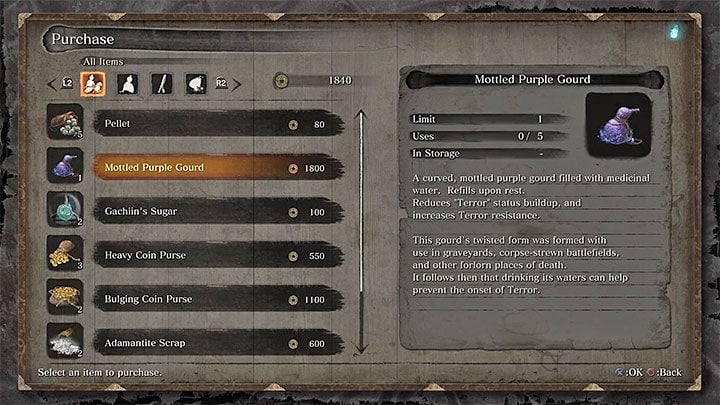 Rewards: Ako's Spiritfall - a renewable item which consumes your Spirit Emblems to increase your damage temporarily.

You can find the lair of this Headless during your exploration of Ashina Outskirts - you get there within the first few hours with the game. We don't recommend fighting this enemy with a weak character - you won't stand a chance. Leave this optional mini-boss for later, e.g. after you explore Ashina Depths.

The biggest threat while facing a Headless enemy is Terror, one of the negative effects found in the game. If the purple bar at the bottom of the screen gets full, you will die. Luckily, you can use certain items to protect yourself from this effect. These items are:

Get one of these two items (preferably the Mottled Purple Gourd) and place it on the Quick Items bar. 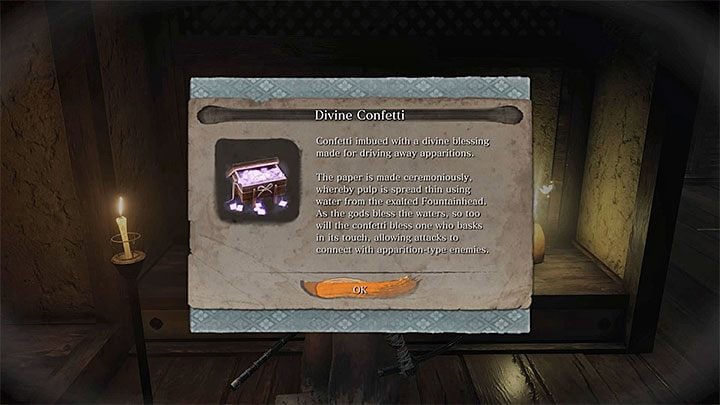 Besides having an item that increases your Terror resistance, you should also get Divine Confetti. This particular item increases damage dealt to apparition-type enemies. Divine Confetti can be found as loot.

Reaching the Headless lair by starting in Ashina Outskirts 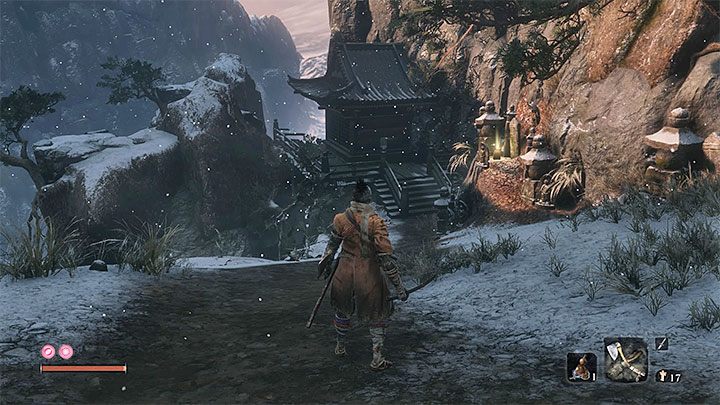 The first path to this mini-boss starts in the main part of Ashina Outskirts, the area you have to go through to reach Ashina Castle. Choose Outskirts Wall - Stairway Sculptor's Idol as your starting point. Go through the locations where you fought with Chained Ogre and General Tenzen Yamauchi.

Go through the fort's right exit, the one where the General stood. Go to the building presented in the picture (the one next to the chasm). 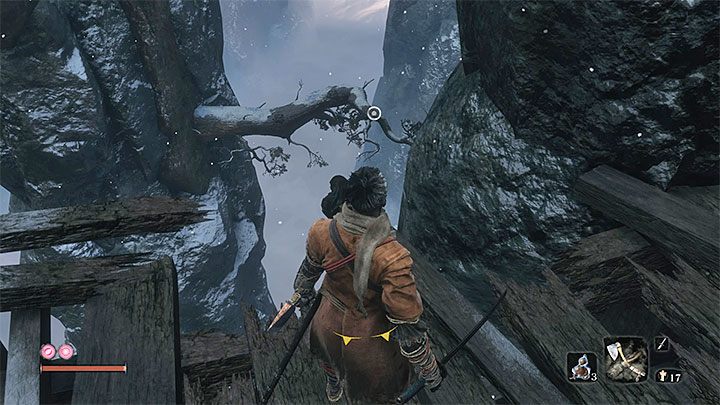 Move from one hook point to another. The last step is to grab the interactive ledge next to the wall. 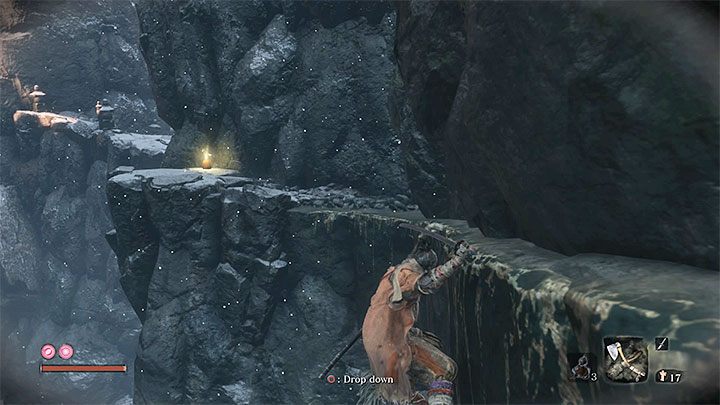 Hang down the ledge and start moving left. Climb up the ledge and then jump down to the platform below. There, you will find the entrance to the cave. Go inside. Soon, you will encounter the mini-boss.

Reaching the Headless lair by starting in Senpou Temple 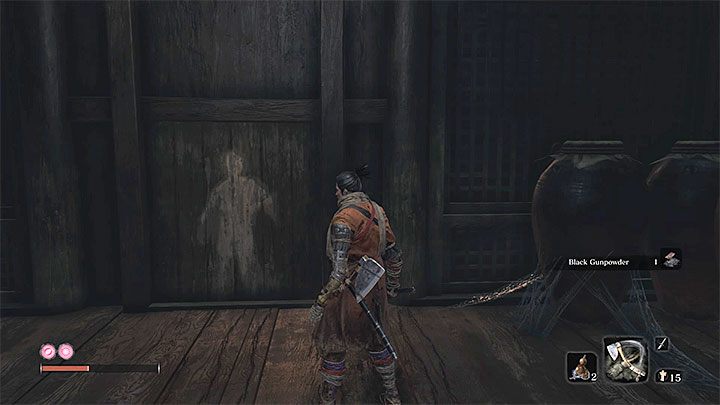 This path is much easier - you won't have to jump between hook points located above a chasm. Start at Bell Demon's Temple Sculptor's Idol in Senpou Temple - you will appear near the single building standing on the hill.

Enter the small temple, kill a few monsters with blades instead of hands and then find the rotating wall presented in the picture. Hug the wall and press the interaction button to rotate it 180 degrees. 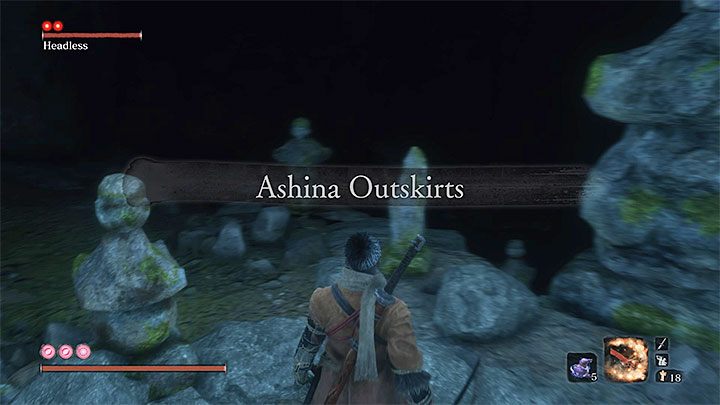 Go through the cave, and you will go back to Ashina Outskirts. The lair of the Headless is nearby. 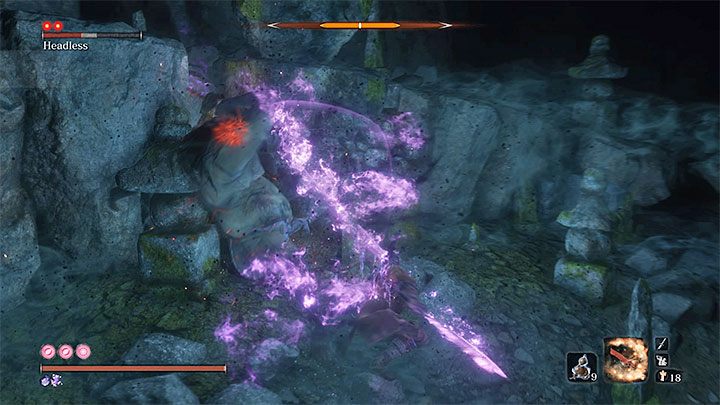 Use Pacifying Agent or Mottled Purple Gourd and apply Divine Confetti before you enter the cave. Your character will get two buffs - one reduces the damage received from Terror-based attacks and the second increases damage dealt to apparition-type enemies.

Don't waste your time on figuring out a way to stealth attack this Headless - you can't do that. Instead, jump down to his lair and start attacking. You can use basic attacks. Thanks to the purple effect created by your blade, you will deal more damage to the Headless. 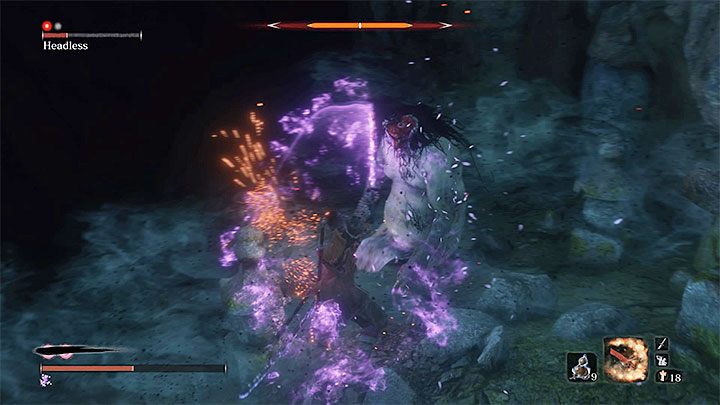 Headless is rather slow. However, the fog covering this place will slow you down a bit. Try to run around the mini-boss and look for a chance to attack him from a side or from the back. If you know that you can't dodge his attack, block it (Wolf will lose only a small portion of his health bar).

The mini-boss can disappear in the fog and reappear somewhere else. Find him as fast as you can and continue attacking. Move away from the Headless if Pacifying Agent/Mottled Purple Gourd has stopped working. Otherwise, your Terror bar will grow faster. Defeat the mini-boss by performing two Deathblows.