During the Non-Compete Clause mission in Saints Row 2022 you'll finally have the opportunity to assault Marshall's HQ. Our walkthrough explains how to make your way up the tower, where to find the elevator keycard and how to defeat the gatling gunner in a boss fight. 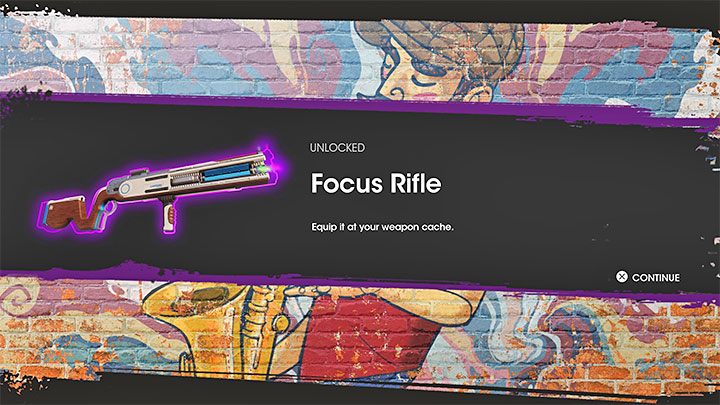 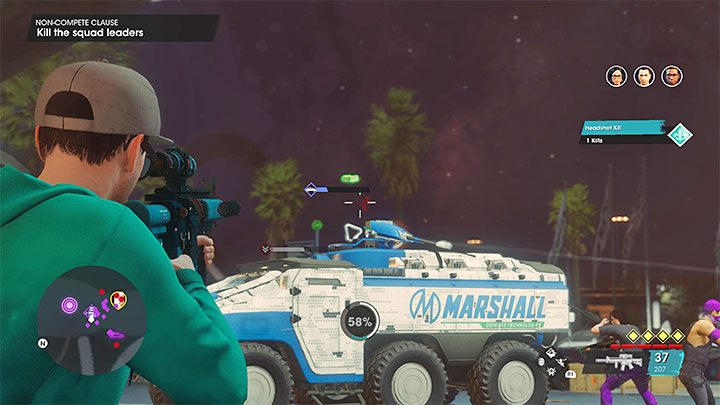 Reach the church and watch a meeting with a Marshall representative. Board any vehicle and head to the Marshall tower.

There are enemies in front of the building you must engage. Watch out for the APCs and quickly eliminate their gunners. 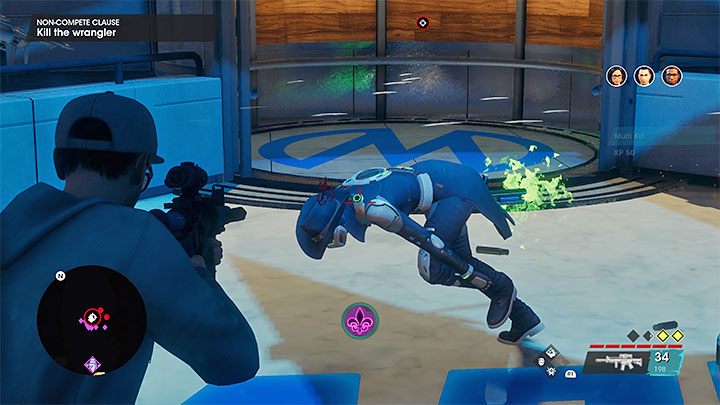 Walk through the building's main door and reengage the Marshall troops. Prioritize the elite Wrangler leading the regular mercenaries - use your best weaponry and aim for his head.

After the battle enter the elevator to reach a higher floor.

Get to the stairs 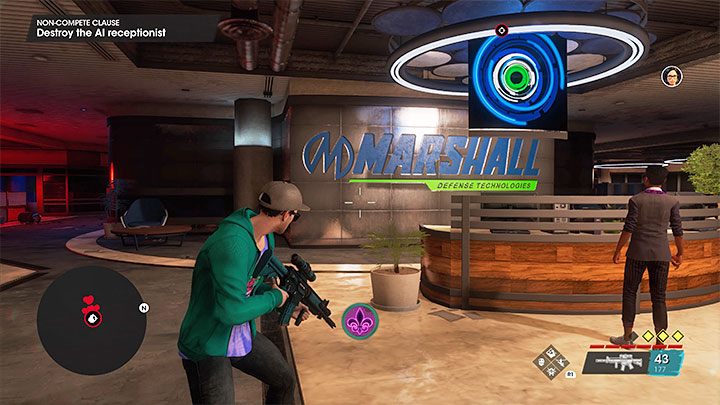 Leave the elevator. After fruitlessly trying to communicate with the AI receptionist, fire at the eye panel to destroy it.

More Marshall soldiers will attack you here - remember to use your AoE skills. Head for the staircase. 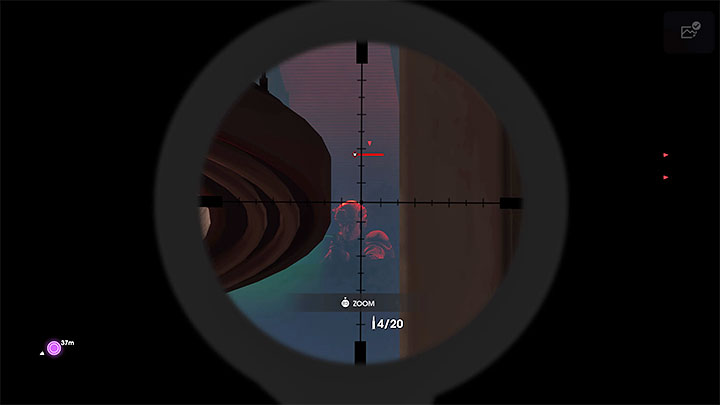 There are three snipers on the upper floor you can spot thanks to their green laser sights. If you have a sniper rifle of your own, use it to kill them. If you don't, get close to them by running from cover to cover.

Keep making your way up the tower and fighting the encountered foes.

Search cubicles for a keycard 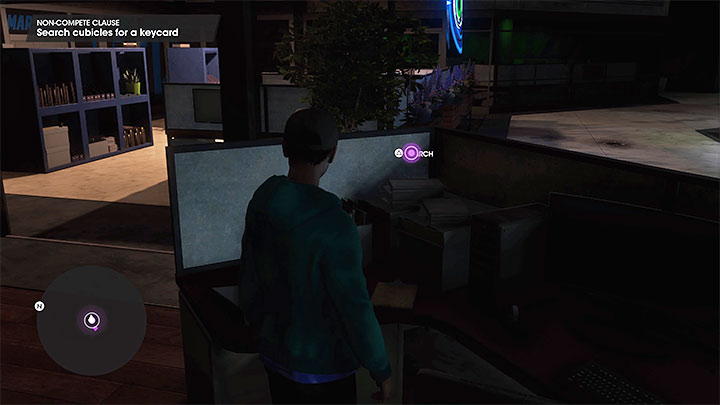 You'll eventually reach a lab, where you must search the nearby cubicles for a keycard. Approach the cubicles and wait for a purple icon to appear - it means you can interact with the office to search it. You'll unfortunately fail to find anything. 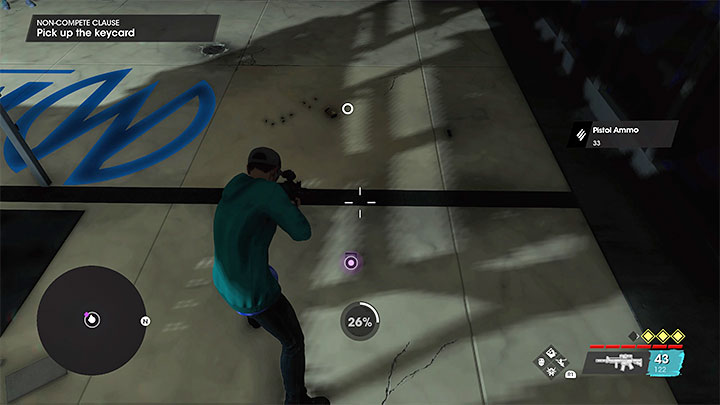 After searching the last cubicle you'll be attacked by more enemies. You must take care of them.

The last wave contains elite enemies equipped with camouflage (attack them when they're visible and change targets when they vanish). One of them will drop the keycard - pick it up.

Enter the elevator and prepare yourself for even more combat. Trying to use one of the subsequent elevators triggers a mini-boss battle against a Gatling Gunner. 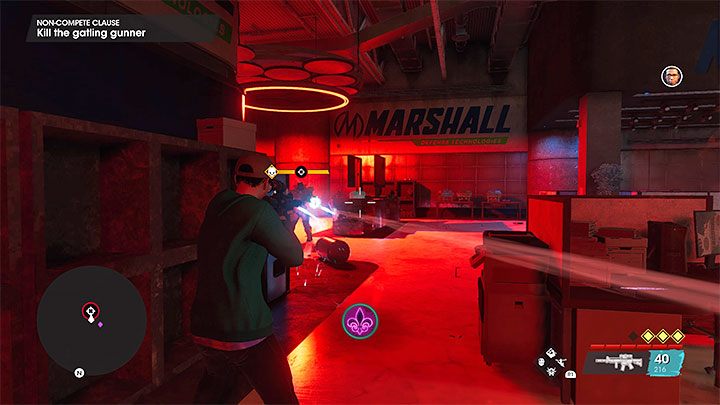 Don't try to attack the boss right away, as his armor is invulnerable. Instead run around and hide behind cover, avoiding his gatling barrage. 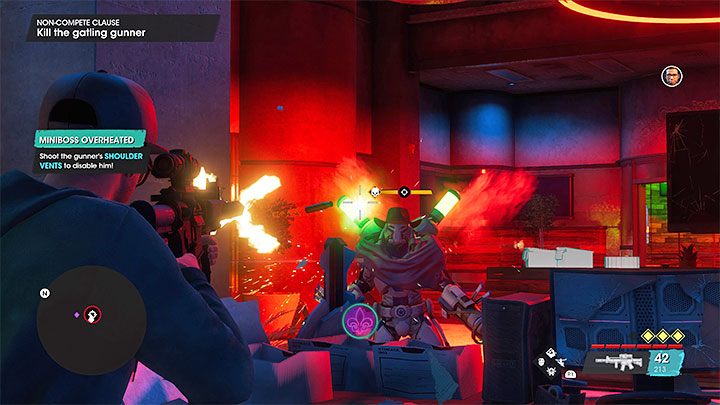 Eventually, the boss' weapon will overheat. Once it does, fire and destroy the two green tanks on the sides of the boss' head. 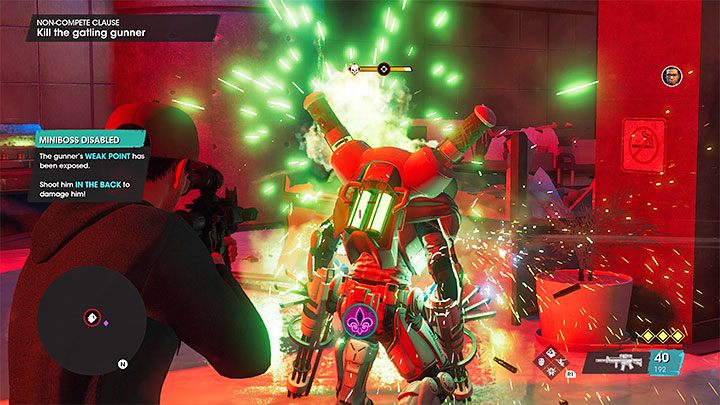 This will stun him for a while. Then, quickly get behind him and shoot the tank on his back. This is the only way to damage him. 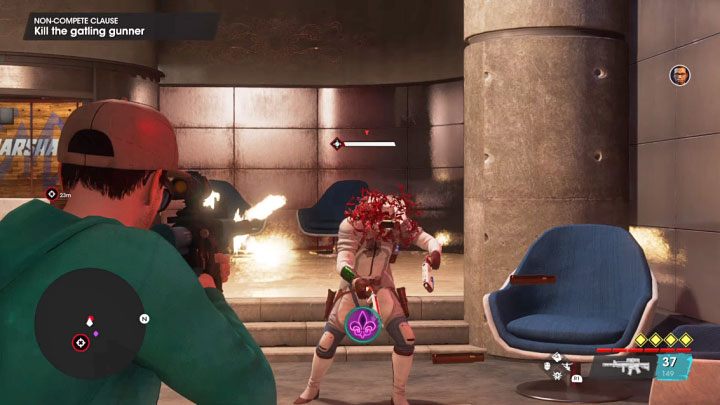 You'll probably have to repeat this at least one more time, as it's very unlikely you'll be able to deplete both the Gunner's armor and health in a single cycle.

Remember to use Takedowns against regular enemies to heal. Make sure to revive downed allies as well. Keep exposing and damaging the boss' weak spot until he falls dead.

After the battle, enter the elevator to the top floor. This triggers a cutscene and completes the mission.