It supposed to be a regular vacations - little, not crowded by tourists island lost somewhere in the ocean. A moment to take a breather and rest from big city, a great holidays for Gina and Brian. Unfortunately, like it often happens, all turned bad before they even got to the place. Suddenly Otto, no longer young pilot of the plane they were flying in, collapsed. The vehicle tilted and rushed down to the ground. Quick search of plane lockers resulted in finding one parachute. Gina didn't want to use it and leave Brian behind but he insisted. After a short struggle he pushed her outside. Soon the girl was falling slowly with an open parachute canopy. Brian took over the rudder and partly thanks to his skills, partly to the luck, he managed to land safely.

Maybe "safely" isn't the right word here... Usually planes can fly again after the landing. Not this time. So what now?

Brian looked around and got acquainted with the area. The wreck was surrounded with the jungle. There was no human tracks seen and the pilot was gone, as well as the backpacks of theirs. 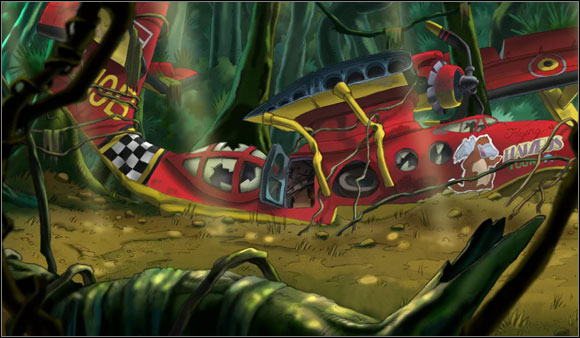 Quickly Brian came up with a simple plan consisted of two parts: get out of the jungle and find Gina. Easier said than done. But first things first. He knew from his previous experiences that in situations like this you usually take advantage of things that seem useless at first glance. That's why he look around the plane carefully. 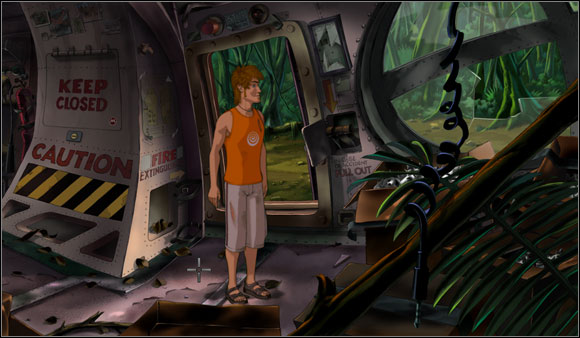 Right next to the exit Brian found a glass shard. It was sharp enough to be used as a cutting edge. On the right he noticed some boxes - it turned out there were capote puppies inside. He took one and watched it closely - it looked like it can be filled with water (worth remembering). He found also a closed compartment, but unfortunately no key as yet. 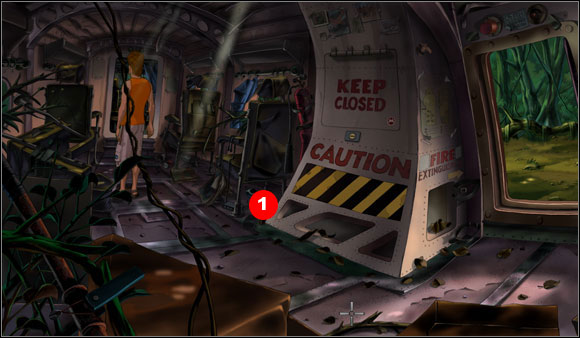 On the way to the pilot's cabin Brian found Gina's hairclip (#1). 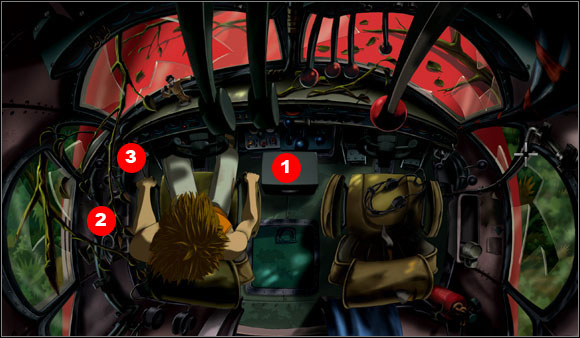 In the cabin between the seats Brian found a central glove compartment (#1). He took bottle of whiskey and binoculars from it. On the left there was another compartment (#2) with some old maps and magnifying glass inside. He also noticed a little lever on the left (#3), so he pulled it down. Something opened outside the plane. There was only one way to find out what was it - go there and check it out. 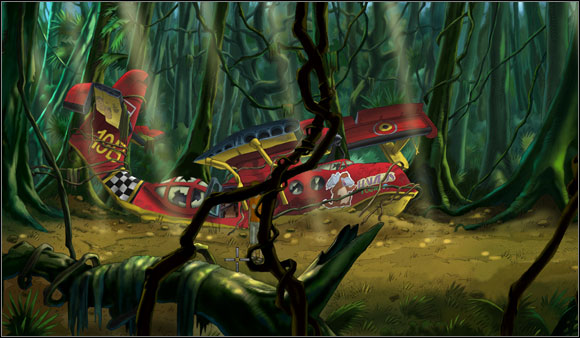 It came out that the lever opened a little hatch on the front of the plane. Brian tried to look inside it but the hatch closed itself before he managed to do it. So he came back to the cabin and used Gina's hairclip to block the lever.

When he left the plane again, suddenly a little white object fell from the sky. It was Otto's license. Brian looked at the treetop. There was something on it but he couldn't see what exactly. He used the binoculars and noticed a bag hanging on the branch, but there was no way to get it at this moment, so he came back to the opened hatch.

Among many junks he found a tool, bottle of water and anti-slippage spray. He hide all those objects in his abysmal pocket and returned to exploring the area. 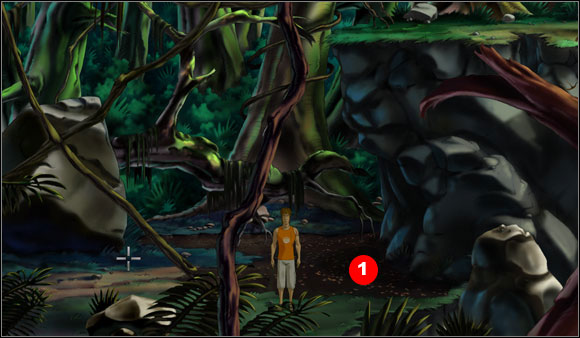 He went to the right and get to the place with big rock and quicksand. He noticed a lemur along the way, but the animal whipped off after seeing a man. On the quicksand Brian found a gogle (#1). It sure was Otto's. He tried to pick it up but his hands were too short, so he used a nearby stick to get it.

He took a good look at the gogle and used a glass shard to cut the strap off it. Then he used the strap on the branch. The result wasn't satisfying, so he used the edge with the branch to improve its shape. He combined it with the strap again and made a fine slingshot.

He used the slingshot to bring down the bag from the treetop. He found a broken plastic key inside which could be used to open the closed compartment but it needed to be repaired first.

He recalled finding a magnifying glass and he decided to use it to melt down the plastic and piece together two parts of the key. But there obviously was some support missing to make it work properly, so he combined the magnifying glass with the tool. Then he put the broken key under it.

In the plane he tried to open the compartment but the key didn't work - it was a bit deformed because of the welding. He used the glass shard to smoothen it and then open the locker without any problem. There wasn't much inside, but intuition told Brian to take the snowshoes.

He came back to the place where he found goggles and tried to climb the rock. Unfortunately, it was too slippery. Luckily, he had this anti-slippage spray so soon this problem was solved. He climbed up the branches and tried to see through the trees but half-way the lemur threw him down. 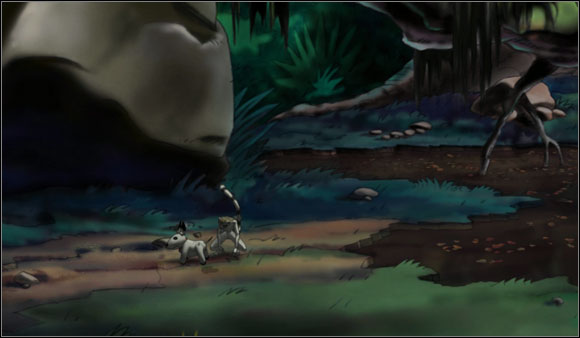 It looked that Brian needed to get rid of the animal before he moves on. He filled the capote puppy with water and put it in the place (seen on the screen above) where he found the lemur. At first, everything seemed to go well. The animal ran up to the puppy and drank the water, but soon it threw it to the quicksand.

Brian came up with an idea. He came back to the plane and get another puppy. This one he filled with whiskey and put it in the same place.

Lemur drank the whiskey and fell asleep. Brian took both animals (asleep and electronic) and climbed the rock again. Now nothing and no one stopped him from getting to the other side.

The jungle was in fact thin there but there was some unpleasant surprise waiting at the end of it. An old, rotten bridge which usually brakes down when characters from adventure movies want to cross it.

Brian decided not to come back to the dangerous jungle, full of wild animals. He left all useless objects in the bushes nearby (except lemur) and put the snowshoes on to spread the weight. Then he crossed the bridge. 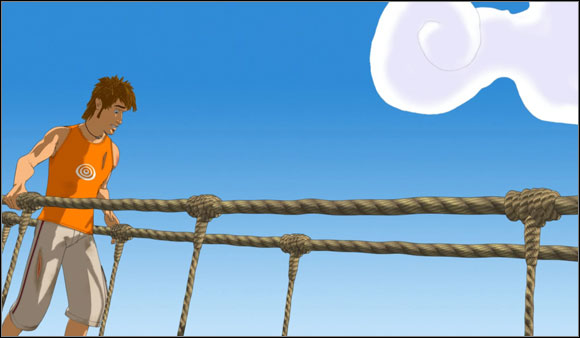