This guide for Ruiner contains general tips, a complete walkthrough, list of the best abilities and strategies for defeating all bosses in the game.

Read this before you start the game:

- Which abilities are worth using?

The guide for Ruiner contains all information that are necessary for completing the game. You can find chapters dedicated to general tips for the game and for fights. You can learn the controls, read which abilities are the best in the game and find out how to fight with the bosses.

The complex and richly illustrated walkthrough is this guide's main part. The walkthrough contains tips for the gameplay and fights. Here, you can find detailed information on how to deal with certain parts of the game. The following chapters contain descriptions of all boss fights and strategies that can lead you to success.

Ruiner is the first game developed by a Polish studio called Reikon Games. The developers from that studio have worked on games like Dead Island: Riptide, Dying Light or The Witcher series. Ruiner offers an interesting plot, set in a brutal future full of injustice and oppression. Players control a lower-class representative - a sociopath, connected to virtual reality, who declares a bloody war on the corporation that rules the city. The dynamic gameplay focuses mainly on arcade fights with enemies - during which we can use both firearms and melee weapons. The game offers advanced graphics with a lot of additional effects and it runs on Unreal 4. However, thanks to cel-shading technology, the game looks a little bit like a comic book.

The guide for Ruiner contains: 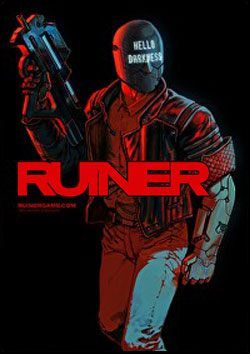 Ruiner is a cyberpunk tactical top-down shooter game, inspired by such classics as the legendary Syndicate series. It's the first title created by Polish studio Reikon Games, founded by a group of experienced developers, previously involved in the production of such games as Dead Island: Riptide, Dying Light and the Witcher franchise.

Ruiner is a combination of several key ideas, including the a dark futuristic world, violent gameplay mechanics, and attractive colorful visuals. The game utilizes an isometric view, bringing to mind the previously mentioned Syndicate or the Crusader: No Remorse / No Regret series. At the same time, it features modern, slightly comic-book-like graphics and spectacular visual effects.

Sunny Cyberpunk is not a bad thing, so don't worry about Cyberpunk 2077

Having divided fans of the genre across the world, the now infamously bright-and-colorful Cyberpunk 2077 E3 trailer left everybody asking, OK, so can it be both sunny and cyberpunk? The definitive answer is: hell yes.

Ruiner Game Guide is also available in our Mobile App This site is not associated with and/or endorsed by the Devolver Digital or Reikon Games. All logos and images are copyrighted by their respective owners.