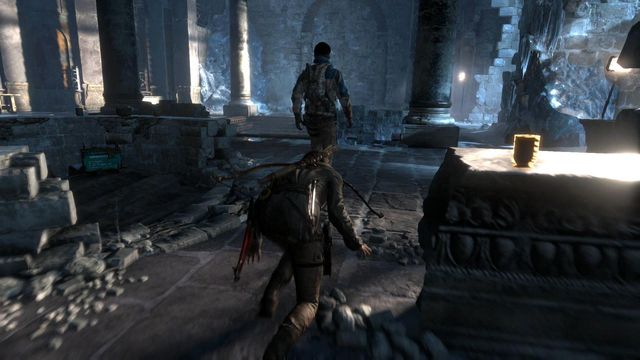 You have a knife, so eliminating everyone here quietly should be a formality. 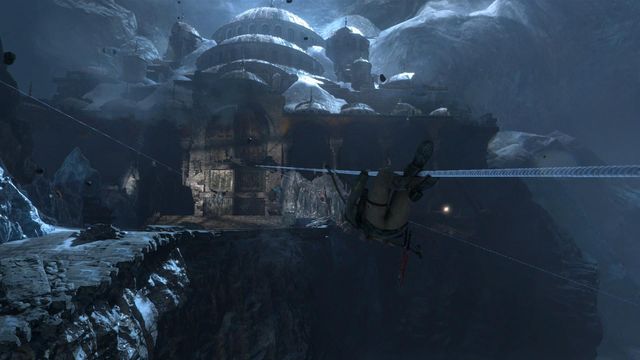 After you kill all the enemies, use the rope to get to the large locked gate in the next part of the complex. You should find out how to open it. 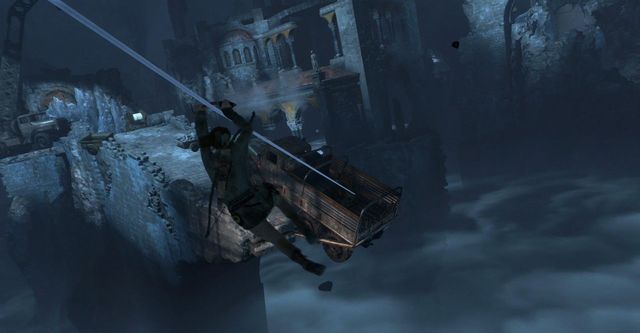 At the gate, use the rope tied to the truck. Lara will zip down and grab on to the back of the vehicle. Get to the left and climb onto the destroyed bridge. 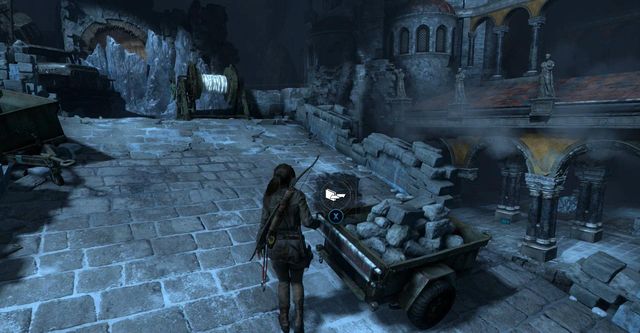 In the middle of the bridge, there is a trailer with stones. Push it into the chasm. 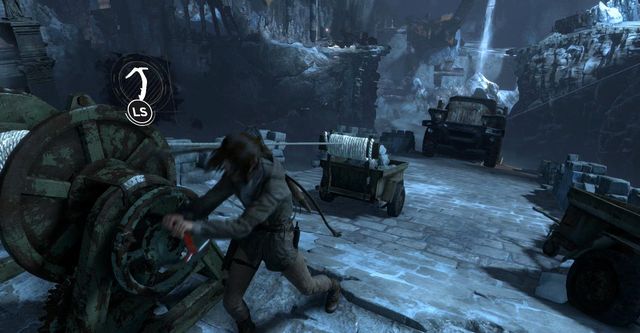 Approach the crank wheel and while behind it, fire an arrow towards the bundle of ropes around a fragment of the other trailer, next to the truck. As soon as the trailer and the cranking wheel are tied together, start cranking and pull the trailer. Walk away from the wheel, stand by the tense rope and cut it with the knife. The trailer will roll down the slope, push the truck and smash into the gate at the other side of the chasm. 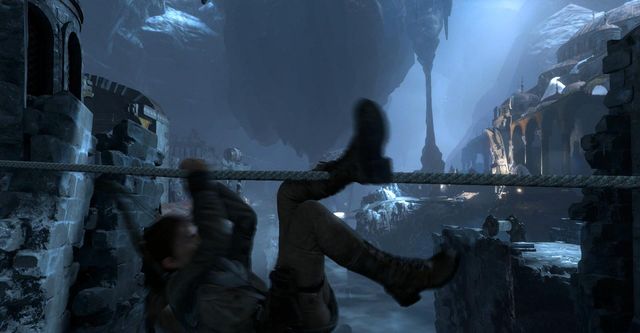 Slide to the next part of the underground using the rope, where you will have to fight some Trinity mercenaries. 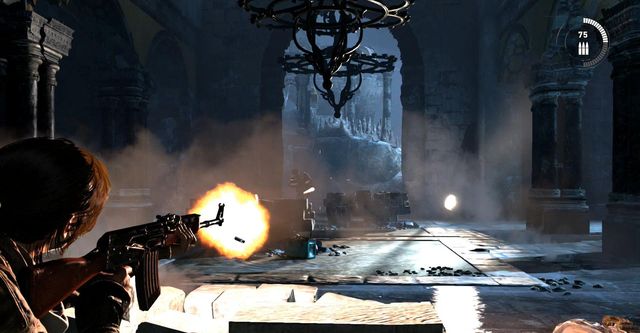 You need to watch out for enemies with knives. You can use canisters lying all around the floor, in combat, as long as you have earlier bought the appropriate skill. The opponents will often be throwing grenades, so try to move around, instead of standing still. 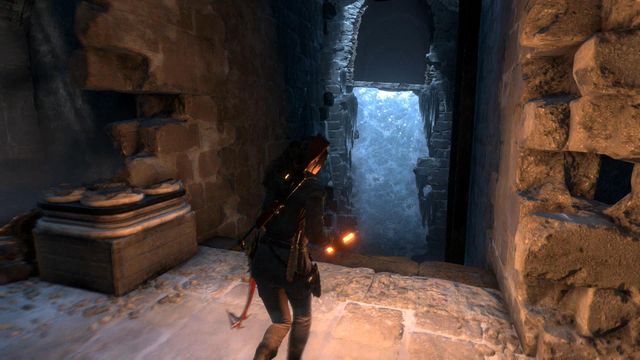 After you defeat all of the opponents, on the left you find the chamber exit, over the ice wall. As soon as Lara starts coming down the stairs, ice will start to crumble. You need to take a leap at the right moment, towards the ice wall, and jab the hatchet into it. You can fail to do that the first time around, but the game should create a checkpoint already after the battle, and therefore you will not have to fight this battle again. 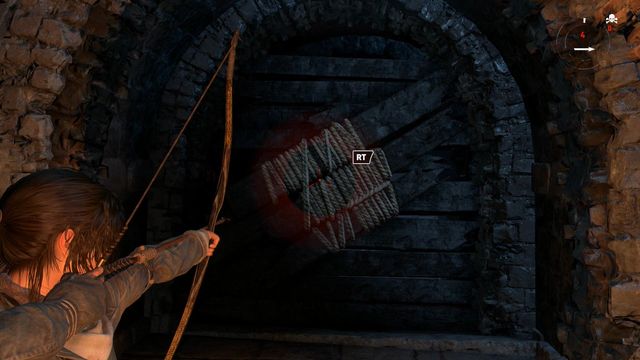 After you climb onto the ice wall, rip out the blockade by pulling on the rope attached to the rope-wound part, with the arrow. 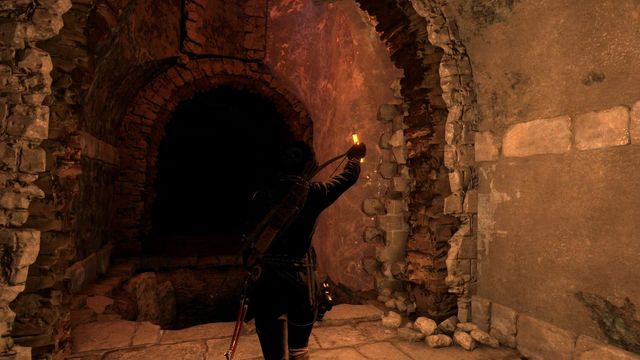 As you follow the corridor, you need to cross the fragment of the floor that crumbles under you. If you manage to jump away quickly enough, you will be able to come out. 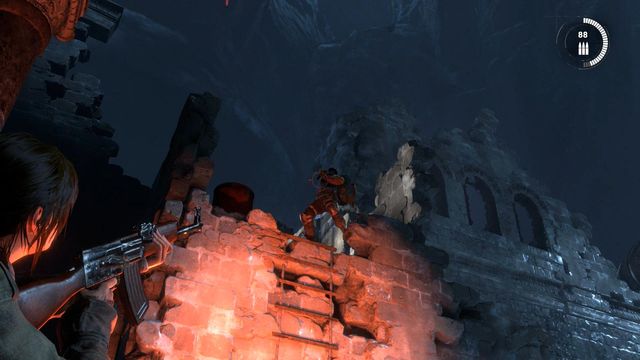 You will get into a location that you have already visited, and this time you are up for another open fight. Additionally, there are also shielded opponents here. To find out about the situation, use smoke grenades (the smaller bottles that are scattered around). Finally, get rid of the man on top and climb the ladder into the spot where he was shooting at you from. From there, you can get even higher, to the part of the location in which you open the gates for good. 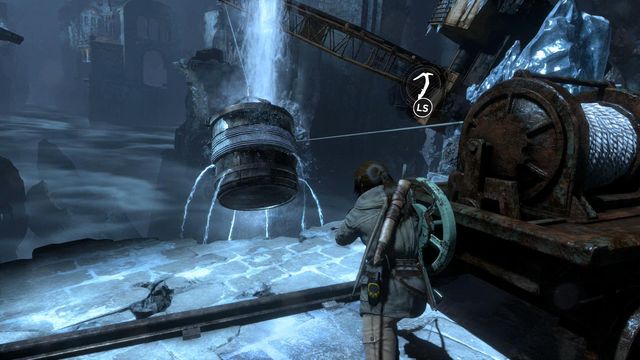 Move the cart with the hoist, more or less, halfway along the track. While next to the hoist, shoot the rope towards the rope wound around the large tank swinging on yet another rope. As soon as you tie both of them together, start cranking the hoist. This will pull the tank that fills with water and, as a result, rips off the slide from the large gate. 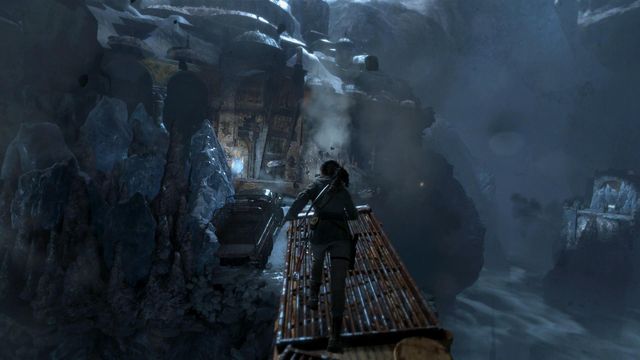 Over the slanting crane, run towards the gate quickly and take a leap, at the end that saves Lara's life.