This game guide to Rise of the Tomb Raider is a comprehensive guidebook which contains a detailed walkthrough of the title developed by Crystal Dynamics studio. Use our guide to solve all complex puzzles, successfully complete the main story, find all the secrets / collectibles, and earn all achievements to unlock the platinum trophy.

The guide has been divided into three large parts. The first section contains a detailed walkthrough of the main story. Our walkthrough presents solutions to environmental puzzles, describes all mission objectives, indicates locations in which you have to interact with different objects or items, and provides tips on combat. We have divided the description of the main story campaign into several dozen chapters. Their names can help you if you're stuck somewhere and you're looking for a solution of a particular problem or puzzle. It is worth noting that in addition to the main story walkthrough, we have also prepared a description of the side story included in the Blood Ties expansion set.

The second major chapter of this guide contains a detailed description of all treasures and secrets. By using the information available in this guide should make it easier to find all collectibles and secrets in 100%, which include documents, relics, antique coins, survival kits or chests. High-quality maps, on which we have marked all key secrets, will be helpful in finding individual collectibles or secrets. The treasures and secrets chapter is complemented by sections in which we have described how to complete challenges and how to explore tombs - use our guide to find out where each of the 9 main tombs are located and what activities you need to do in order to reach the chambers containing the most important treasures.

The last major chapter is the trophy guide, which describes the achievements and trophies of the core game content. You can find out more about the requirements of individual achievements and how to unlock the platinum trophy.

Our guide is complemented by several smaller chapters and sections. They contain valuable information about: all abilities of Lara Croft, including their applications and recommendations of unlocking them; in-game controls; system requirements, and information on how much time is required to complete Rise of the Tomb Raider.

List of levels and stages in Rise of the Tomb Raider

We have divided our walkthrough of Rise of the Tomb Raider into dozens of mini-chapters. In each of these chapters you will find one to several pages of detailed walkthrough.

All collectibles available in Rise of the Tomb Raider

In the treasures and secrets section of our guide, you will find tips on how to collect all secrets in 100%. Descriptions of game's secrets were divided according to the locations in which they are located. Each described location contains high quality maps with marked collectibles.

All tombs available in Rise of the Tomb Raider

In Rise of the Tomb Raider you can explore optional tombs which are well-known from the previous installments of the series. Their rules and principles remain unchanged - they force you to solve a series of environmental puzzles. The main reward for fully exploring each tomb is a new skill which can help Lara in completing further stages of the main story.

All trophies available in Rise of the Tomb Raider

Our trophy guide to Rise of the Tomb Raider will allow you to unlock all achievements in 100%. Therefore, you can use it to earn the platinum trophy. The most complex trophies have been described in more detail on separate pages of our guide:

All skills and abilities of Lara Croft

Rise of the Tomb Raider includes character development mechanisms. In our guide we explain how to unlock new skills of Lara Croft. In addition, you can find a list of all abilities along with information about their performance and our recommendations whether it's worth to acquire them.

Does the game include a multiplayer mode?

Rise of the Tomb Raider does not have any traditional multiplayer modes based on competition. This means that earning a platinum trophy is based purely on single-player content.

However, a Co-Op Endurance mode was implemented into the game after its release. It allows you to fight for survival and find rare supplies by playing as a duo. However, players do not fight directly with each other in this mode.

Does the PS4 version offer all content including add-ons?

Rise of the Tomb Raider on PlayStation 4 is a complete edition and this includes the game's release that was offered to PS+ subscribers in July 2020. The PS4 game is sold exclusively in the 20 Year Celebration edition, which includes all additional content that has been released on PC and XONE. The following list contains all items and bonuses included in this edition:

Should I play the 2013' Tomb Raider before launching this game?

Rise of the Tomb Raider is the second installment of a new trilogy of Lara Croft adventures which launched in 2013. Playing the previous part of the series is recommended, and that's because Rise of the Tomb Raider continues some important story points, among other things, concerning the battle against the organization called the Trinity. Rise of the Tomb Raider also features characters from the previous installment of the series, such as Jonah. Knowledge about the events that occurred in the earlier part is absolutely not required, but you may not understand or miss many interesting story-related topics if you have never played it.

Should I have the PlayStation Plus subscription?

A PS+ membership is only required if you want to play the Co-Op Endurance mode. Everything else is 100% single player content, so no PlayStation Plus subscription is required to play the game or earn trophies (including the platinum trophy).

Does Rise of the Tomb Raider run better on PS4 Pro?

Yes, the developers of the game have prepared a special patch to make the game look better on PlayStation 4 Pro in comparison to a standard console model. It's worth adding that the game has options to customize the graphics to suit your preferences - you can choose high image quality in 4K or increase the frames per second of animation at the cost of some visual effects.

If you want to learn more about the requirements of the game (also on other hardware platforms), please refer to our System requirements section.

Does Rise of the Tomb Raider have a difficult platinum trophy?

Earning a platinum trophy in Rise of the Tomb Raider can be quite challenging. However, the platinum trophy can be unlocked in a much easier way in comparison to the previous installment of Tomb Raider. This is mainly due to the fact that the basic trophy set does not include any achievements related to online gameplay. It is possible to earn 100% of the basic content trophies by playing the single player mode.

The most problematic trophies concern completing the campaign on the Survival difficulty level and accomplishing various achievements in the Score Attack mode, which is not associated with the story mode. These include winning gold medals or obtaining a certain level of bonus for the cards you have collected. Collecting as many as 300 cards can also be time-consuming.

Does the game have any micropayments?

Yes, Rise of the Tomb Raider contains micropayments. You can purchase special cards that are part of a Advantage Pack, a Challenge Pack and a Wild Pack. The cards affect the gameplay and allow you, for example, to get a small advantage in comparison to people who don't use any cards. However, the actual game content never changes and is not hidden behind micro-payments.

Below we have prepared a list of the most important control buttons in the Rise of the Tomb Raider on the PS4. For more information about key bindings and in-game controls check the PS4 controls and XONE controls pages of our guide.

About Rise of the Tomb Raider Guide

Hot Topics of Rise of the Tomb Raider Guide 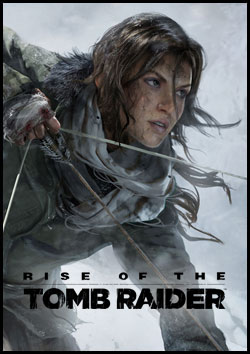 Rise of the Tomb Raider is the eleventh game featuring the archaeologist Lara Croft, and the second one featuring survival elements along TPP action-adventure after the series’ 2013 reboot – Tomb Raider.

The game picks up the story started in the previous chapter. The events on Yamatai island left a mark on the protagonist, turning her into a tougher, more ruthless, but also restless woman. The community gives no credit to her incredible story, leaving her with a sense of isolation. Lara is determined to find the evidence proving the existence of what she fought against on the island – to do so, she travels to Siberia in hope of finding the legendary Invisible City of Kitezh that supposedly holds the key to immortality.

When it comes to gameplay mechanics, the creators stayed true to the solutions employed by the previous game. Sneaking behind enemies’ backs and using various tools, like the bow, is still an essential, but there are also opportunities to engage in regular shoot-outs. Locations are about three times bigger than in the previous game, prompting you to spend more time on exploration and searching for various collectibles and crafting materials.

Again, the developers took extra care to provide us with an impressive visual experience. The game also features novelties like a dynamic day and night cycle and changing weather.

More About Rise of the Tomb Raider