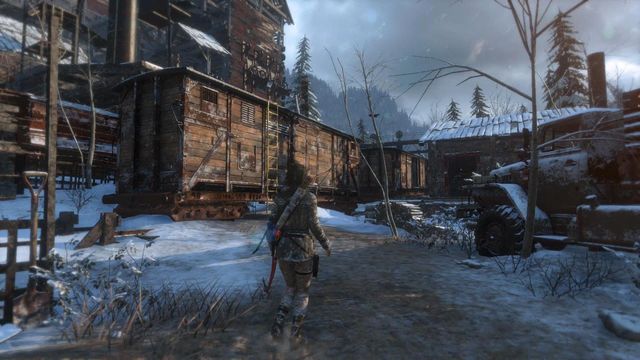 After you get to the grounds of the mill, climb up the yellow ladder, onto the first railway car. After you get onto the roof, jump over onto the next one. 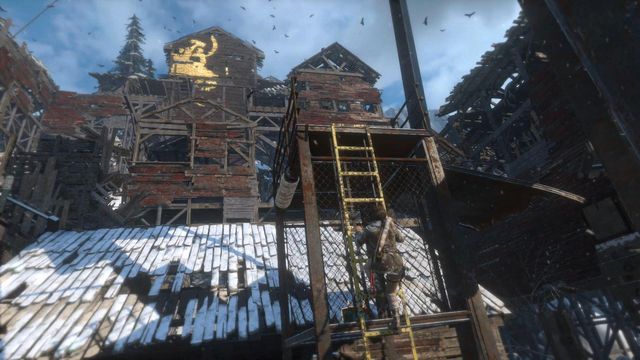 Over the next ladder, climb onto the first level of the copper mill. Walk around the mill on the left. 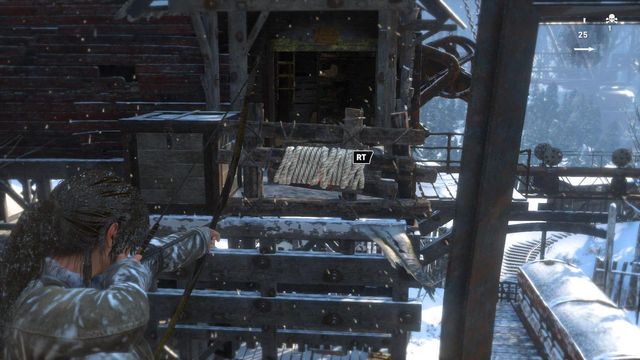 To jump over from the left side of the mill to the right one, you first need to rip away the wooden fence. Shoot an arrow at its part that is covered with rope, Lara will pull the rope and destroy the fence. After that, jump over to the other side, enter the opposite room and climb up the ladder. 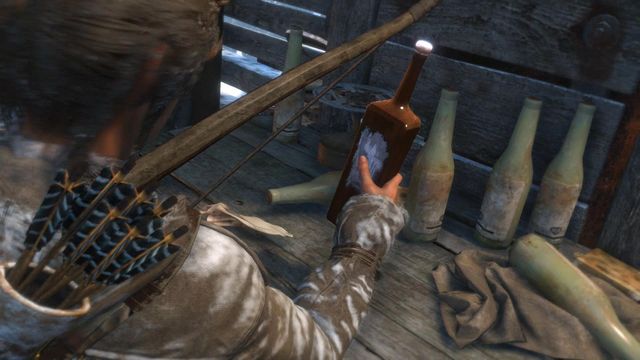 Here, Lara finds several bottles, thanks to which you can craft Molotov cocktails, i.e. containers filled with fuel that set fire to the nearest objects after they break. 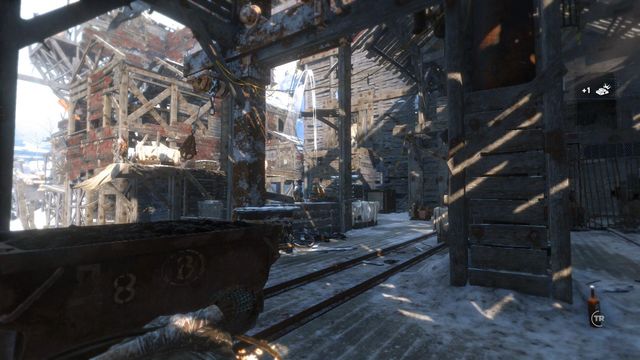 Several steps ahead, Lara will get an opportunity to try out her new weapon. Craft a cocktail, by following instructions on the screen. Sneak up to the talking guards behind the cover, and throw a bottle at them. This should set them both on fire. After that, deal with one more guard that has been alarmed by the screaming soldiers. 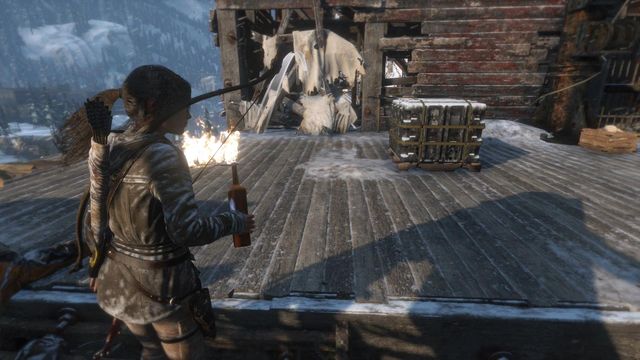 The path is blocked by beams and cloth. Pick up a bottle from the ground, set the contents on fire and throw it towards the obstacle. 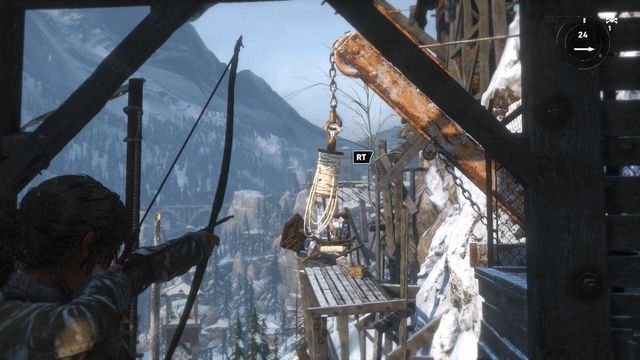 Cross the room and you will reach a scaffolding up ahead. Approach the edge of the room and aim the bow at the ropes in the center of the screen. Lara will shoot a rope arrow and just like Tarzan, she will swing over onto the scaffolding. 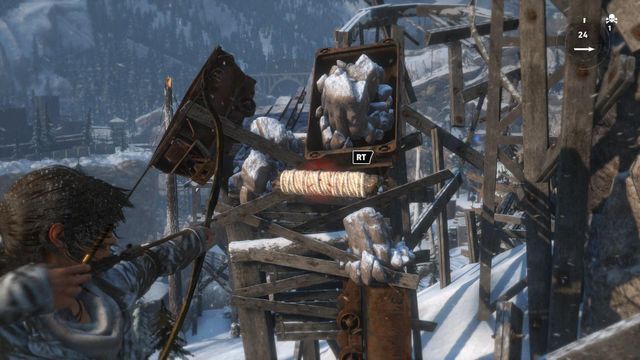 Get rid of the cart that blocks your way, by shooting another rope arrow at it. 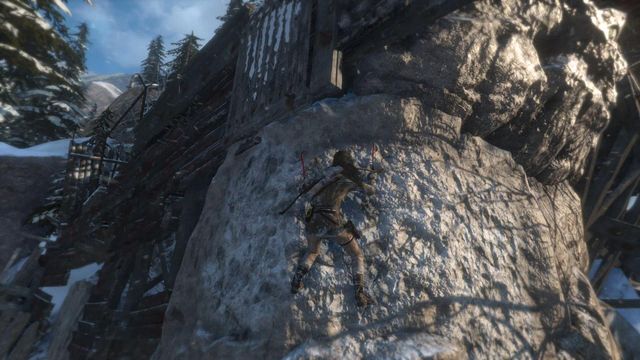 Walk over the narrow fragment of the scaffolding, leap towards the rocky wall and remember to jab your hatchet into it. Move to the left and over the plank with a white smear on it, double-jump onto an even area. 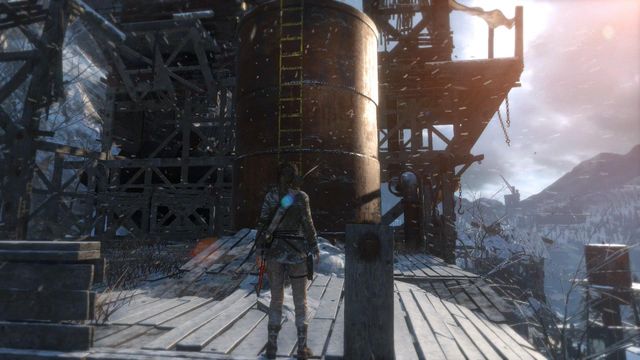 Climb up the ladder onto the small container and jump over from the container towards the ledge. Then, move right. 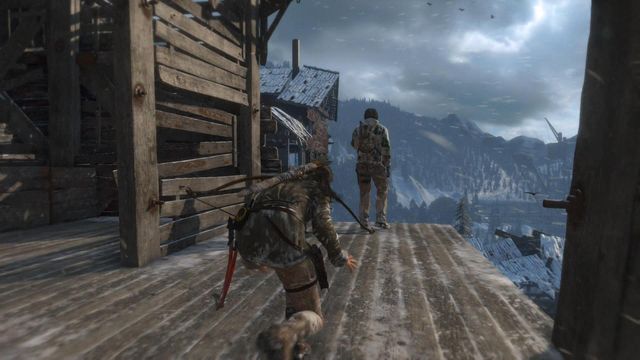 Do not wait for the guard to end his conversation on the radio, get him from behind and finish him off with the hatchet. 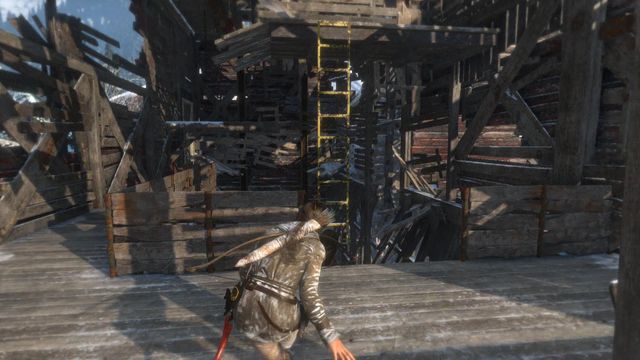 After you kill the guard, jump onto the yellow ladder and climb up to reach the next level of the mill. 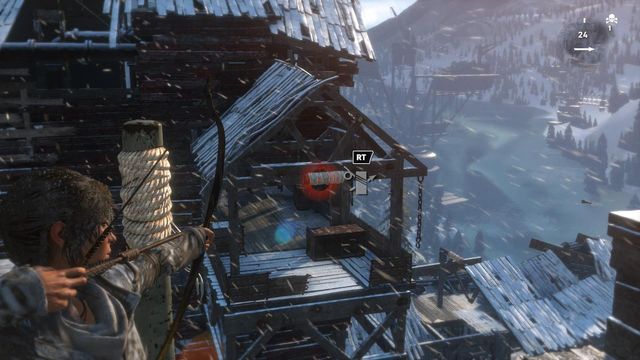 Shoot an arrow at the rope bundle at the other side of the chasm, while next to the stump covered in rope. Zip down the rope and prepare for a fight. 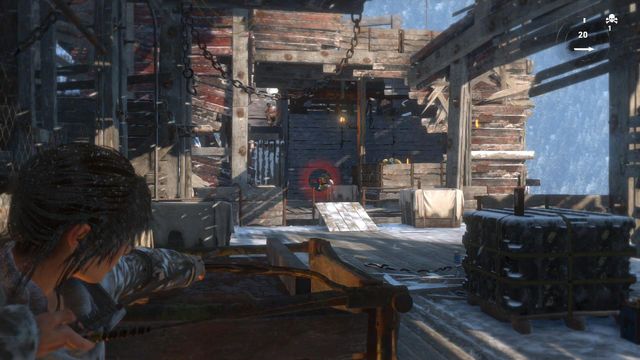 There only are several opponents, but from now on, you will frequently be dealing with their grenades. Position of grenades is indicated by the red triangles; try avoiding them by moving into a different spot, away from the explosion area. Shoot all of the enemies and move on. 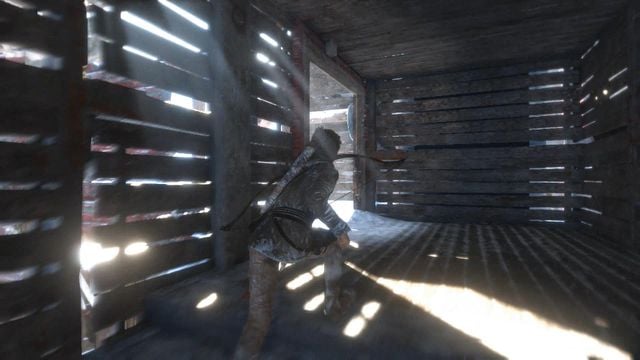 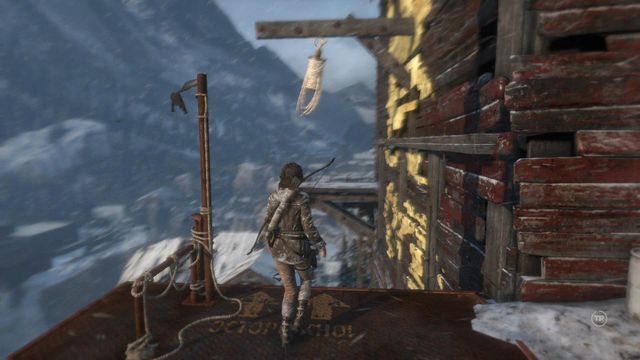 ... and swing over to the other side of the mill, on the rope.