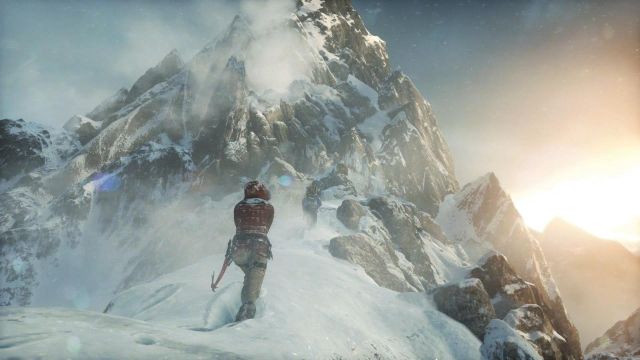 The game starts in high mountains, near the camp from which Lara and Jonah will go searching for the lost city. First you must go through the deep snow, following your friend. 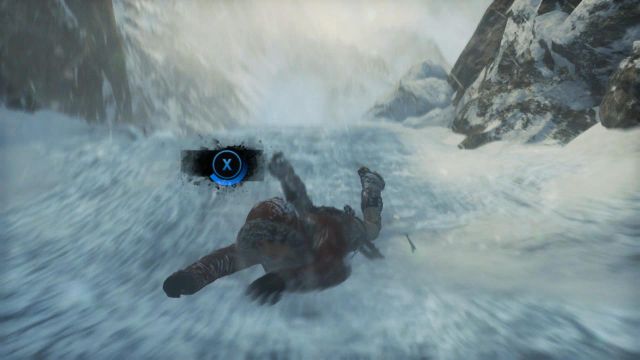 After walking a bit more than dozen of steps, Lara will start falling. To avoid dying, you must react to the first of the so called Quick Time Events (further in this guide called the QTE). When a blue X sign appear on the screen, press it on the pad. 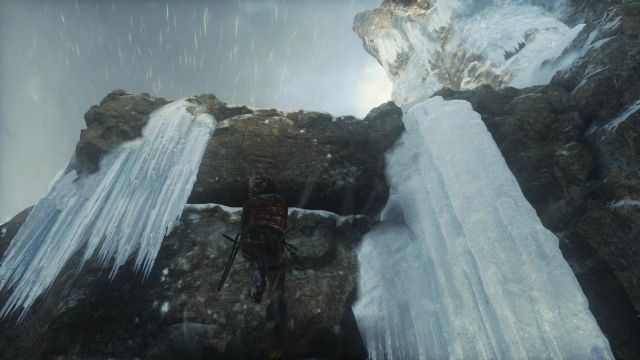 Lara will manage to stick the axe into the ice with enough strength to hold her. Then, follow the hints appearing on the screen. Pull the left analog stick of the pad and press the A button. Lara will jump over the edge. Watch out, another QTE will start and you will have to react quickly by pressing the X button. Jump above the second abyss, then go up to get to safe territory. 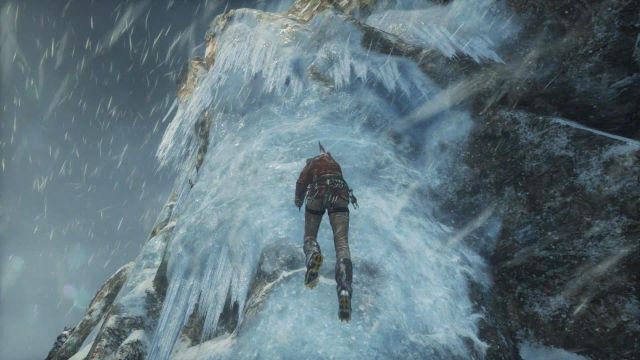 Walk towards the ice wall and press X button to stick the axe into the ice. You can also jump and then use the axe. Climb few meters, then walk the hanging icicles around from the right side. Avoid other ones under an overhang and turn left. Once you reach the edge, jump left - don't forget to quickly press the X button, allowing Lara to quickly stick the axe into the ice. Perform another jump in the direction of Jonah waiting for you. 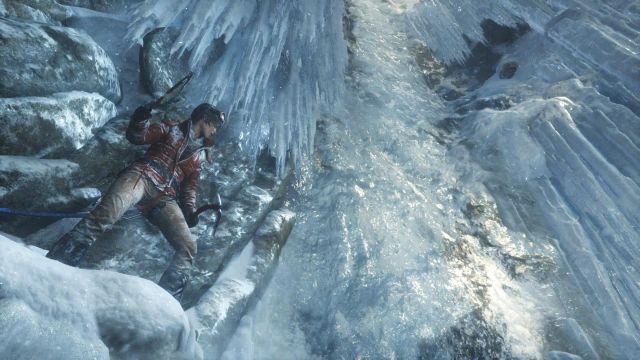 Once you regain control of Lara, go right, then jump on the icy fragment of the wall. Quickly press the X button so that Lara will stick the axe into the ice. Go above. After a cutscene with falling rock pieces, go above. Press the A button on the pad so that Lara will jump to the above overhang. Perform another jump right, to the next ledge. Go slightly right and jump above, sticking the axe into the ice. Keep going right. 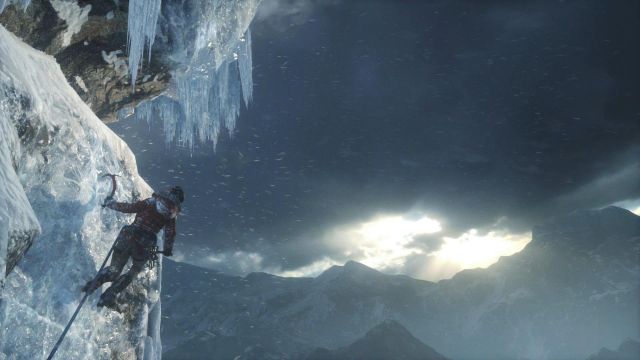 Perform another long jump right after another cutscene and quickly press the X button so that Lara will stick the axe into the ice wall on the other side. Go right and above. At some point you must perform a long jump above and then immediately stick the axe into the ice. Walk above the edge of the ice wall and Lara will notice the ruins of the city. After that, she will slide below. 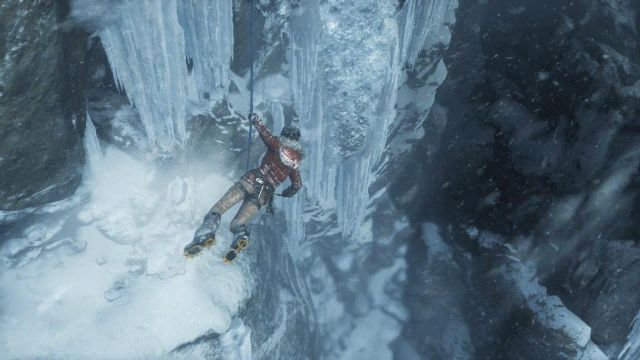 Lara is hanging on the rope. The other end is attached to Jonah. Move the analog stick of the pad up and down to swing the girl. After few moves, once Lara is swinging enough, press the X button near the ice overhang to use the axe. 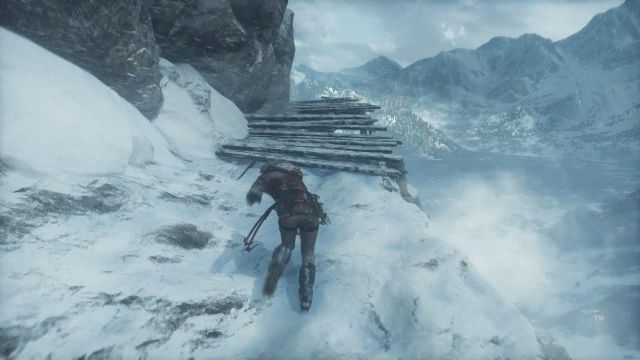 Once the avalanche will start, run straight ahead, using the A button to jump from one wooden platform to another platform. Watch out as the first jump will require you to react to a QTE - press the X button. 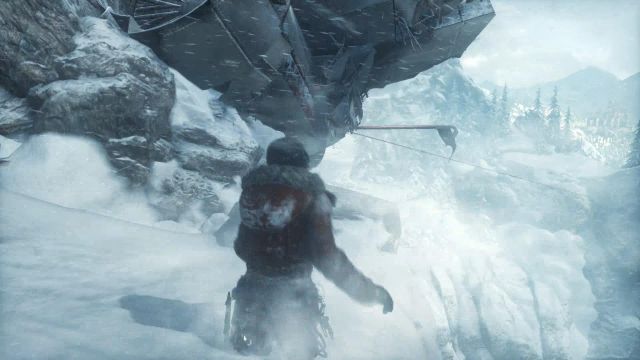 At the end of the plane wreck, jump up to catch the metal rod pointing from the tail of the machine. 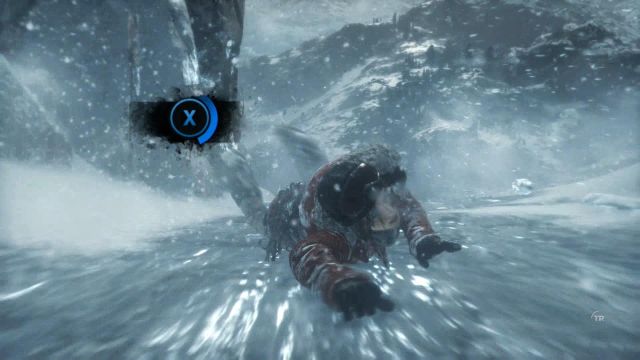 Once again, Lara will start sliding down, be ready for another QTE. 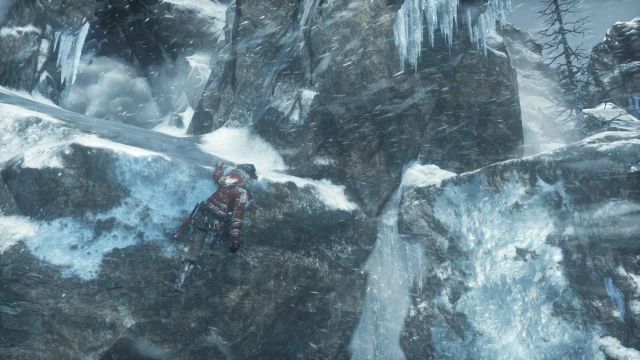 Once Lara will hang on the edge of the rock, quickly jump right using the axe. Otherwise the avalanche will kill you. Climb to the top and run forward while jumping above the cliffs.