Rise of Nations: Rise of Legends Game Guide by gamepressure.com 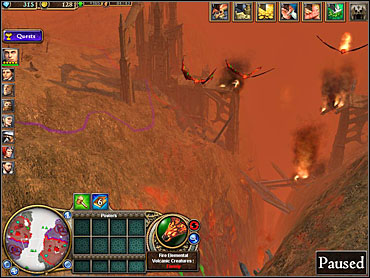 Take over the Tresure Stash (3) and the Vault (4) to get yourself some additional resources. When you take over the southern enemy city, use Magic Whirlwind to move most of your forces to the Noth. Note that you can't leave the southern base totally undefended, as "neutral" beasts will surely take advantage of it. You have 4 mines, 2 cities, a Treasure Stash, and a Vault under your command. That's enough to feel secure, you just have to survive the crisis after attacking the southern enemy base and things will be fine. Dark Alin won't stand a chance against you - your economy is too strong. Just remember to mostly train troops that can attack air units (no Salamanders, folks).

This site is not associated with and/or endorsed by the Microsoft or Big Huge Games. All logos and images are copyrighted by their respective owners.