This page of the Returnal game guide contains a walkthrough of the boss fight against Hyperion from the fourth biome, the Echoing Ruins. We suggest how to prepare for the battle against the boss Hyperion, what attacks the boss uses and how to avoid them, and what to expect during the three phases of the fight. 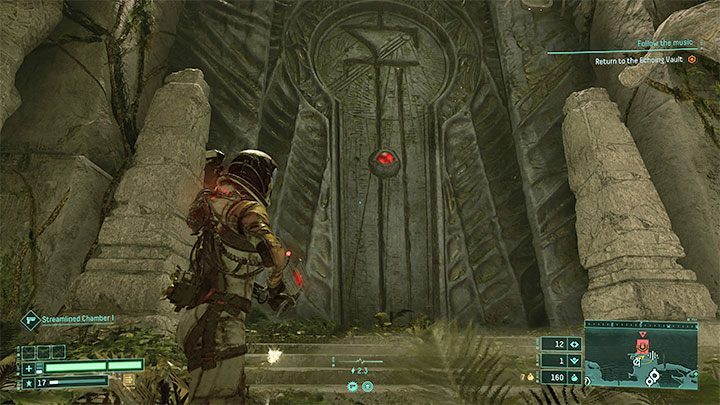 The fight against Hyperion occurs near the end of the exploration of the fourth biome on the planet Atropos known as the Echoing Ruins. Hyperion is the fourth main boss and defeating them is required to get the Fractured Key necessary to access the fifth biome.

The boss's lair is located on top of the Echoing Vault and before you can access it, you will need to explore the ruins in order to acquire two keys. 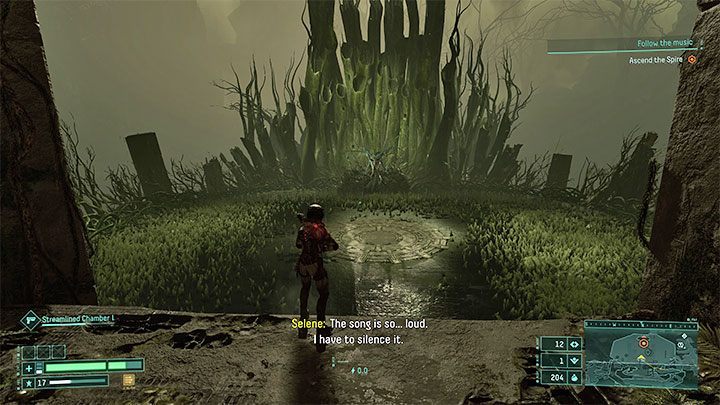 Selene must reach the very top where she will encounter Hyperion as they are playing the organ. Jumping into the arena is tantamount to starting the fight.

Hyperion has three health bars, so the fight against this opponent has been divided into three phases and each of them is distinguished by the boss using unique attack combinations. 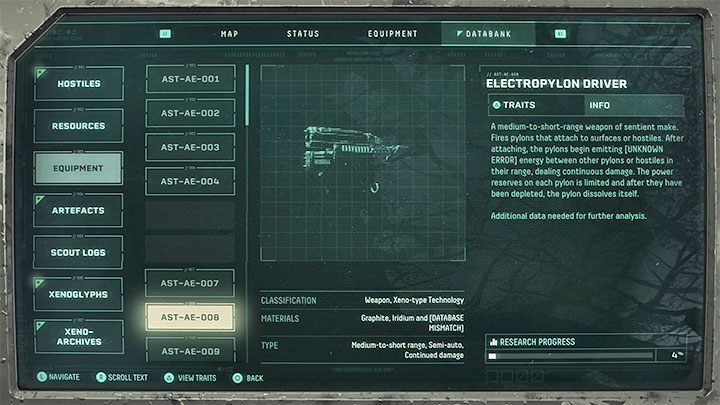 Before the fight against the boss Hyperion, you should be well prepared. The more time we spend preparing, the easier it will be to win the fight.

During this battle, we recommend using any medium or long range weapon. We used the Electropylon Launcher, which is a new weapon that is unlocked for the first time upon entering the Echoing Ruins.

It is important that Selene has as many health points as possible and a lengthy integrity bar (the suit's energy). It is also very advisable to bring some consumables with you into battle, which should include at least one first aid kit.

If you have the option, we advise finding a reconstructor in the Echoing Ruins and spending Ether there. This will allow us to create a save point and repeat the fight in the same cycle if Hyperion manages to defeat the main character. 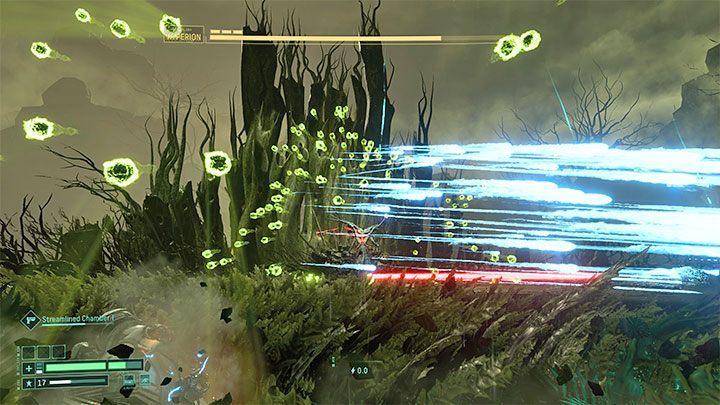 From the very beginning of the fight, we will need to dodge slow-moving projectiles and correctly maneuver between them, because they will appear in large quantities.

The blue projectiles are the bigger threat. In order to dodge them, you have to jump aside at the last possible moment. 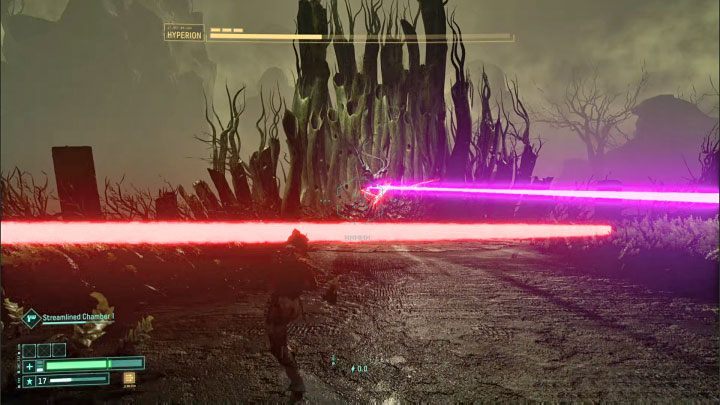 The boss will unleash a red shock wave from time to time - we can easily jump over it.

The purple, horizontal rays present a more serious issue. In order to avoid them, we need to dash (dodge) to the side with the correct timing. If the red wave and purple rays happen to be dangerously close to the heroine at the same time, you will need to jump first, then additionally press the sideways dash button while in midair. 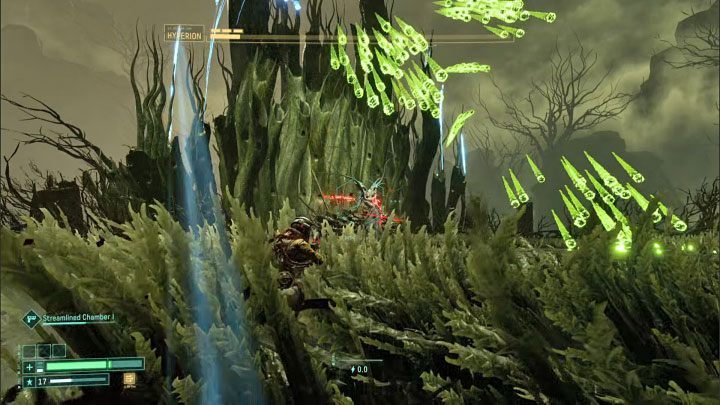 The boss will also bombard the arena with various types of projectiles. We need to focus on correctly dashing to the side while paying utmost attention to dodging the faster-moving, blue projectiles. 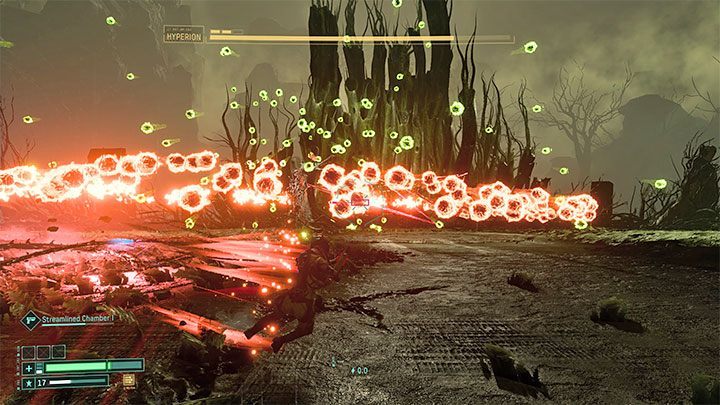 In the second phase of combat, one of Hyperion's most important new attacks is creating red vines in the arena. A red glow precedes their arrival, and we will need to quickly dash away from these areas. 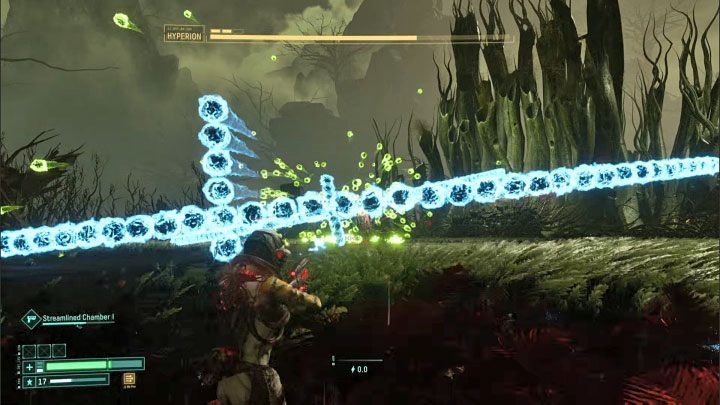 Hyperion will also start firing rows of projectiles. In this case, the course of action is quite obvious - we dash forward in order to phase through the moving projectiles during the dodge and avoid injuries. 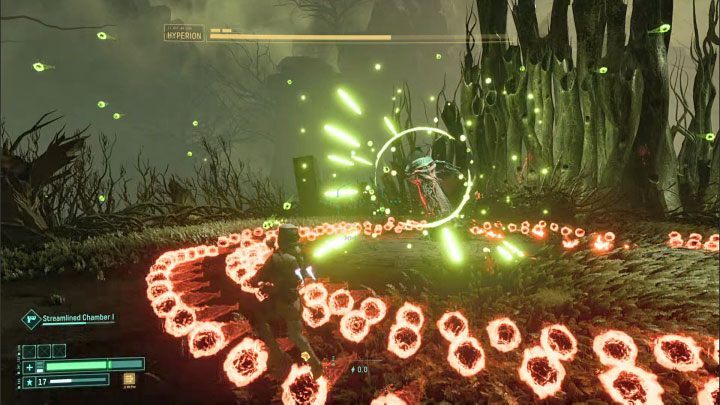 The shock waves will become more difficult to dodge, as they will consists of rows of spheres. We have to perform each jump flawlessly. Additionally, consider dashing in midair to slow down the moment of landing and easily jump over each large wave. 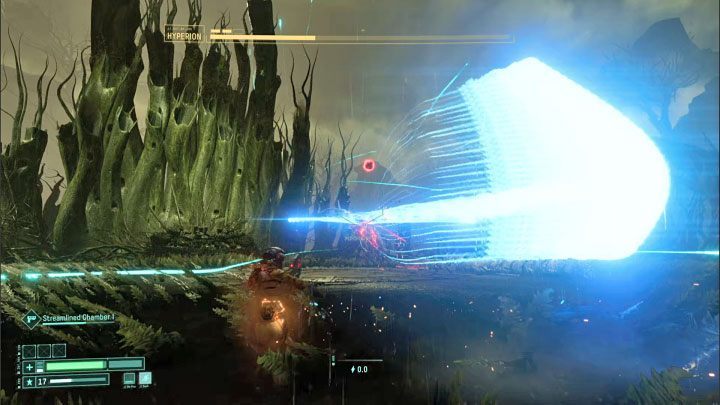 During the second phase of the battle, the boss will shoot blue projectiles at a higher rate. This time, they will form a large vertical row of projectiles accompanied by "regular" blue projectiles. These aren't difficult attacks to avoid, just remember to make longer sideways dashes by holding the Circle button. 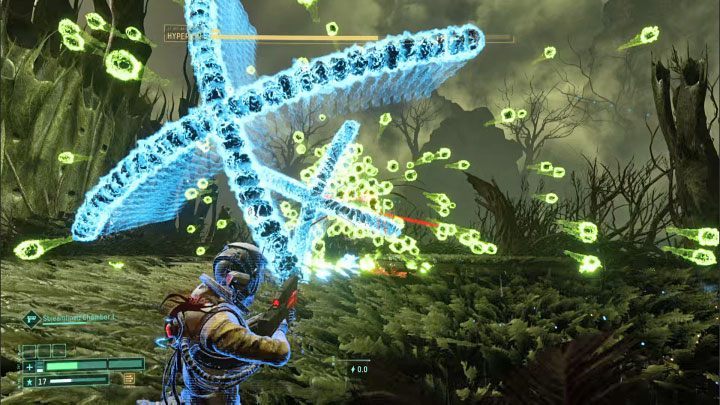 During the third phase of the fight, the boss will start shooting rows of projectiles in an X shape. These projectiles are best dodged by jumping and then pressing the dash button while in mid-air. If they shoot several of these rows at the same time, it should be sufficient to simply dodge to the side while staying in constant motion. 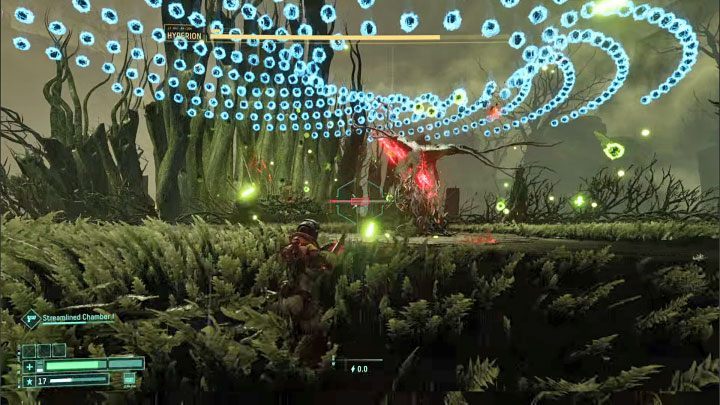 In the last part of the fight, the whole arena can be bombarded with regular projectiles. Keep an eye on their descent and stand in areas where they have already crashed to the ground or where they won't land at all. 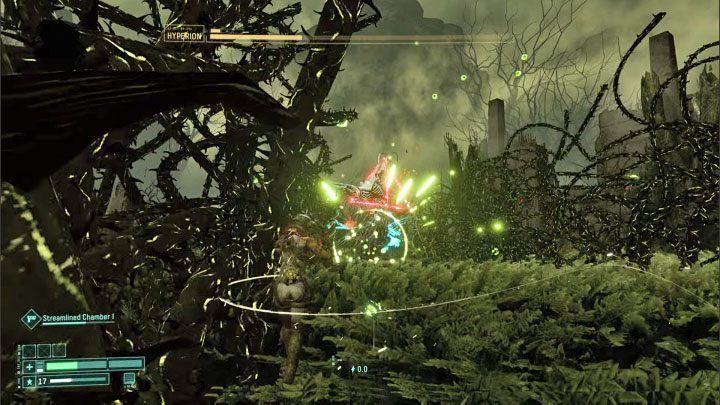 The boss can temporarily limit Selene's field of movement with vines. When this happens, focus on dashing away from the projectiles moving towards the heroine. As soon as the vines are gone, run away from the spot and resume roaming around the entire arena. 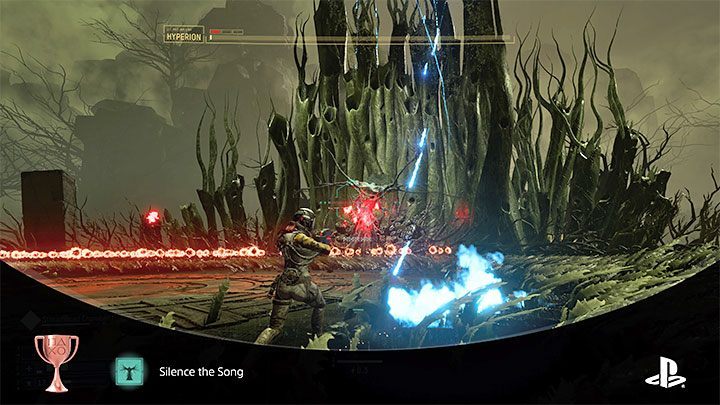 Upon defeat, the boss will drop 5 Ether and a Fractured Key (lying on the ground in the grass), which can be used in the Echoing Ruins to unlock access to the 5th biome - the Fractured Wastes.

Defeating Hyperion for the first time will also earn you the Silence the Song trophy.