In Red Dead Redemption 2, Arthur can use a wide variety of weapons, and every one of them has a set of stats. At first, you can only access the weaker weapons. Better models can be purchased, found or acquired in another way. On this page, you can learn how to get the best weapons in RDR2.

The best revolvers in RDR2 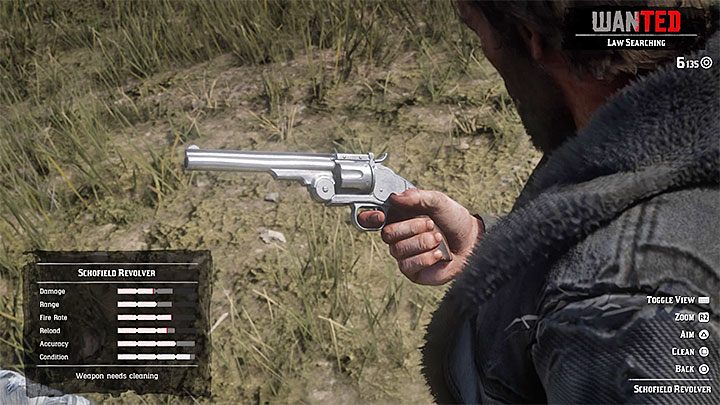 Schofield Revolver is one of the best revolvers in the game. This weapon can be acquired in two ways. You can get it faster by learning about the illegal business behind the drug store in Valentine (look through the window). Then, you have to rob the store and force the doctor to open the door at the back of the store. The room has a few enemies - kill them fast. After that, you can look for the revolver.

Another way to get the aforementioned weapon is to complete Blessed Are the Meek? quest available in the second chapter. From now on you can purchase this revolver at all the gunsmith stores. Schofield Revolver should cost you $84. 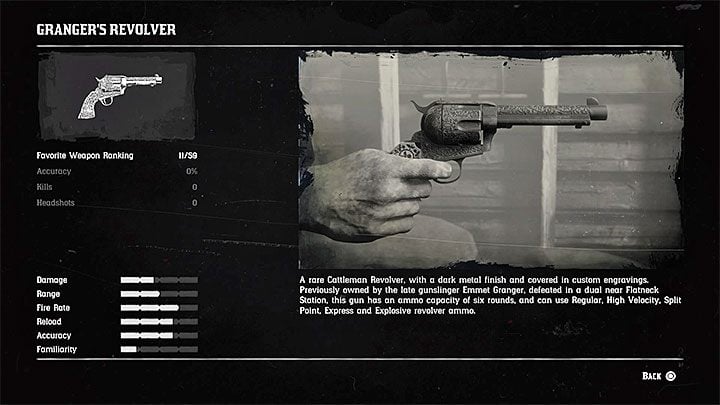 The gunslingers from The Noblest of Men, and a Woman also drop very good revolvers. The picture above shows one of them - Granger's Revolver. Remember - unique weapons can't be upgraded which means that you can't increase their base stats. 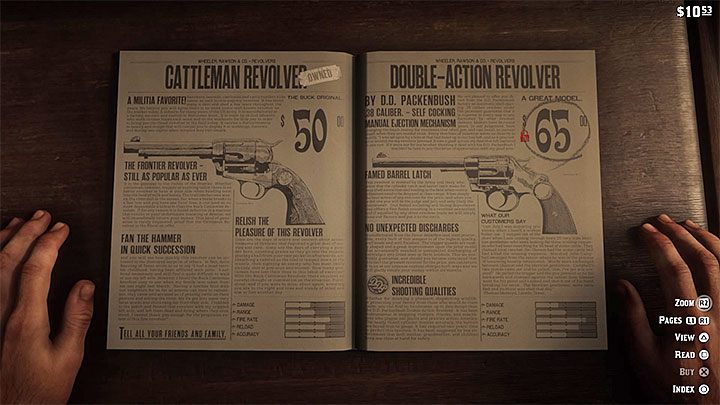 This revolver can be purchased after A Strange Kindness mission available in the second chapter. Double-Action Revolver costs $65. There is also an alternate way of getting this weapon - you can get it while you and Sean are robbing one of the homesteads in chapter 3 - its description can be found in Dutch's Gang Missions and Jobs chapter (Home Roberry - Sean part).

The best other sidearms in RDR2 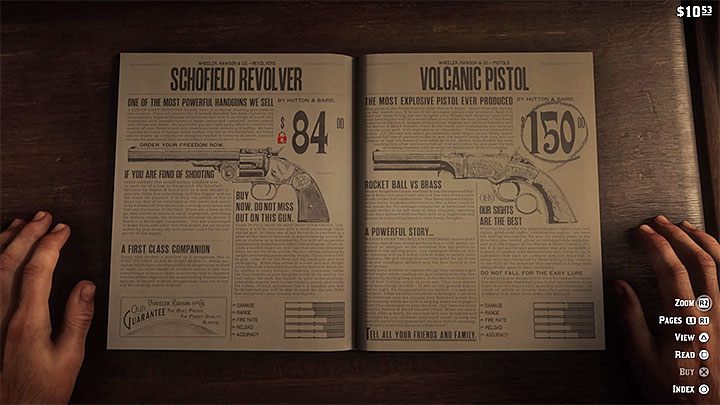 Pistols are one of the most important sidearms in the game. Volcanic Pistol is a great choice - you can purchase it after reaching chapter 2 (it costs $150). Volcanic Pistol deals a lot of damage, at least for a sidearm, but it has reduced fire rate and ammo capacity. 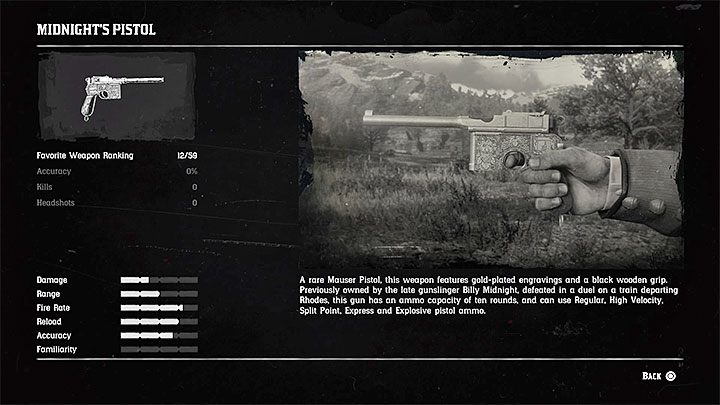 Semi-Automatic Pistol is a great choice for all players who want to have a sidearm with great fire rate. As the name suggests, this is a semi-automatic pistol which means that you can overwhelm your enemies with bullets. This pistol can't be unlocked right away. It becomes available after completing The Joys of Civilization in chapter 4. This weapon costs a lot - you will need $210.

If you don't want to wait until you reach chapter 4, you can do The Noblest of Men, and a Woman side quest. One of the objectives in this quest is to defeat Billy Midnight - this allows you to get Midnight's Pistol (see the picture above). Remember - unique weapons can't be upgraded which means that you can't increase their base stats. 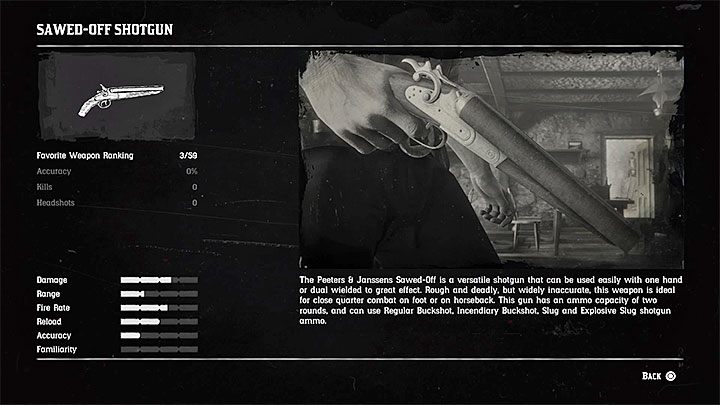 It is easy to forget about one of the sidearms, the Sawed-Off Shotgun. This is a perfect weapon for dealing massive damage at a short distance. You can use it to kill humans, wolves and other predators. The first Sawed-Off Shotgun is received automatically after starting Enter, Pursued by a Memory mission. The second copy of this weapon (if you want to use two Sawed-Off Shotguns at the same time) can be purchased at a gunsmith for $85.

Note - Remember that this weapon requires constant reloading. A Sawed-Off Shotgun isn't a good choice when you have to deal with larger groups of enemies.

The best regular and repeater carbines in RDR2 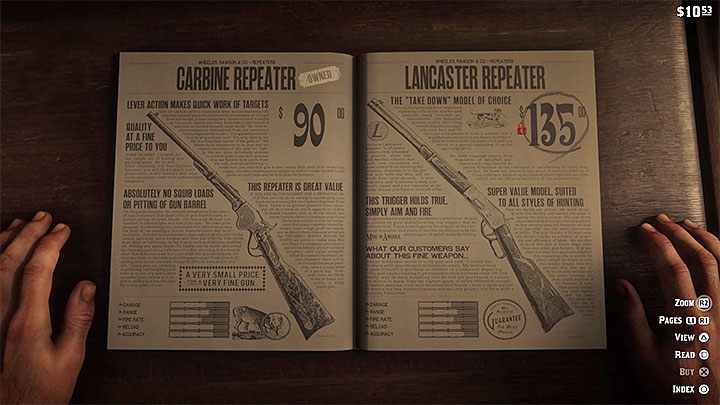 In our opinion, repeater carbines are the most interesting option for the majority of the fights in the game. They have a great fire rate and are useful in attacking enemies at a medium distance. Remember, you don't have to buy any of these weapons - Arthur will receive them during the storyline. Lancaster Repeater is a weapon that will probably be used by you throughout the majority of the game. You receive it during An American Pastoral Scene main quest in chapter 2. Go ahead and upgrade this weapon - the next repeater rifle is received in chapter 6. 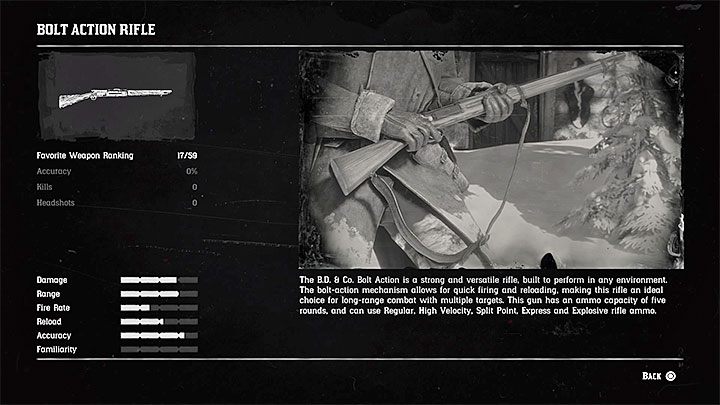 The standard rifles suffer from low fire rate. Their basic function is to attack enemies or animals that are far away. They deal more damage than repeater rifles. Bolt Action Rifle receives our recommendation. You can get it for free after Preaching Forgiveness as He Went main quest in chapter 3. This rifle beats Springfield Rifle in accuracy and reload.

The best sniper rifle in RDR2 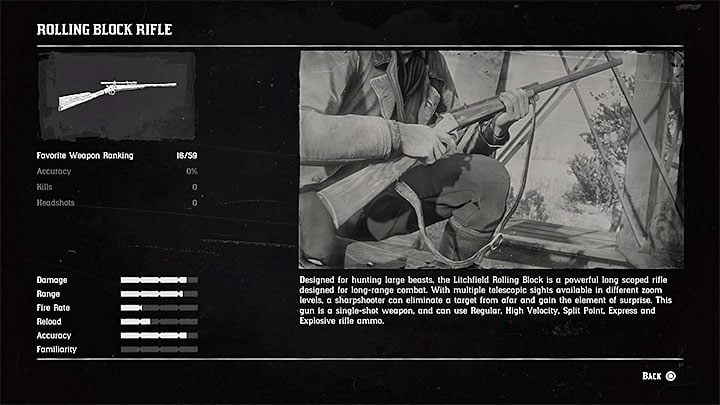 As for the sniper rifles, you get your first piece during the main storyline - it is called Rolling Block Rifle. Arthur receives this weapon when he visits the gunsmith in Valentine during The Sheep and the Goats main quest. This weapon will last you for a long time.

You can think about switching to another rifle when you reach chapter 6. There, you can get Carcano Rifle which has better fire rate and reload rate. Regardless of which sniper rifle you have, remember that these weapons are for long-distance shots. Use it to eliminate enemies and animals that are far away. Don't use them at a medium distance. Here, it is better to use a bolt action or a repeater rifle.

The best shotguns in RDR2 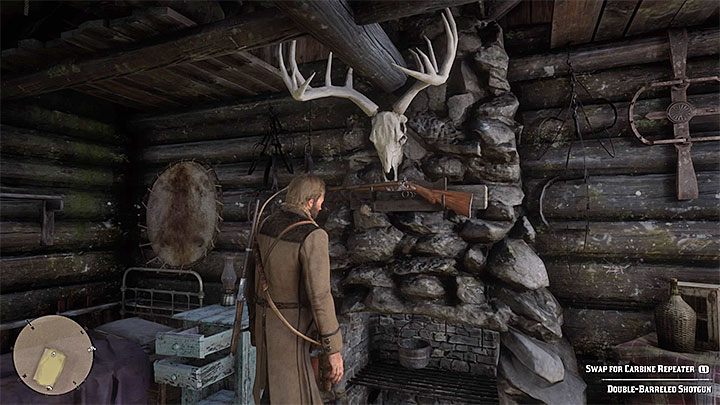 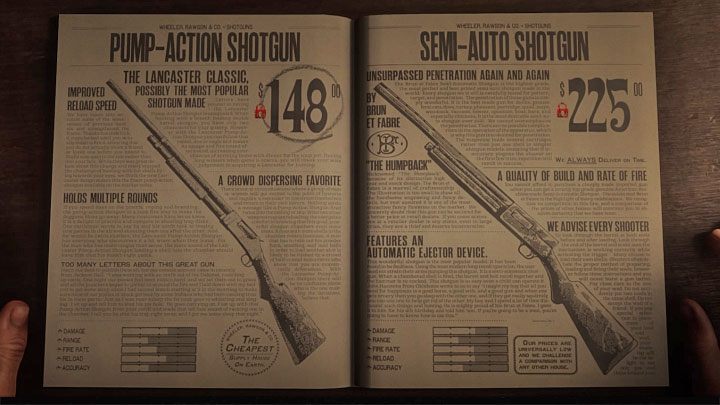 Semi-Auto Shotgun is even better. The default way of acquiring this weapon is to purchase it for $225. The shotgun isn't available right away, you need to complete A Fine Night of Debauchery available in chapter 4.

There is also an alternate way of getting Semi-Auto Shotgun. Head to Watson's Cabin located north-west of Wallace Station. The shotgun is hidden in the basement.

The best melee and throwable weapons in RDR2 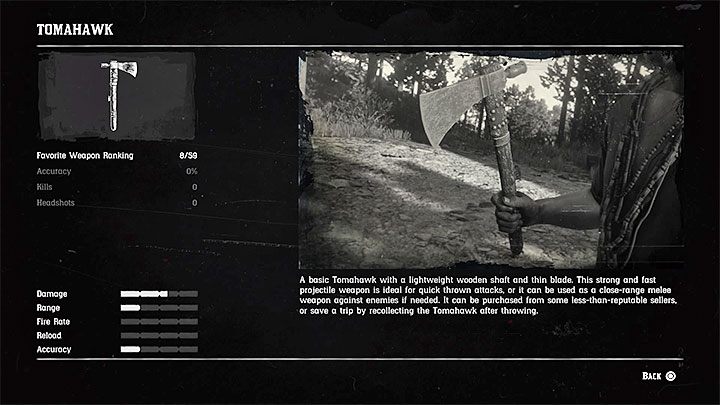 The best melee weapon in RDR2 is called Machete. You can get it during chapter 5. You can also find other unique machetes.

As for throwable weapons, Tomahawk is the best one. You get one during The First Shall Be Last main quest. After that, you can buy these weapons at fencers.