The main character in Red Dead Redemption 2 has three attributes - health, stamina and the Dead Eye. Besides the regular bars, each of the attributes also has a Core. Read this page to learn about the cores and what is their usage as well as how to regenerate Cores in RDR2.

The difference between the bars and the Cores 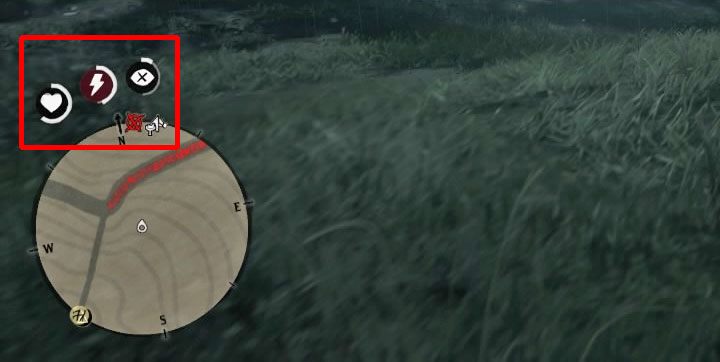 The most important thing is to distinguish the regular bar from a Core. Bars have a shape of a circle and are white. They go around the heart, lighting and eye icons. It should be noted that their length isn't always the same. Arthur can extend them by making progress in the game. This topic has been discussed more broadly in Character development chapter.

Cores are marked with the heart, lighting and eye icons. They are "full" by default, and they deplete over time. A depleted part of a Core becomes darker.

Core depletion and their usage 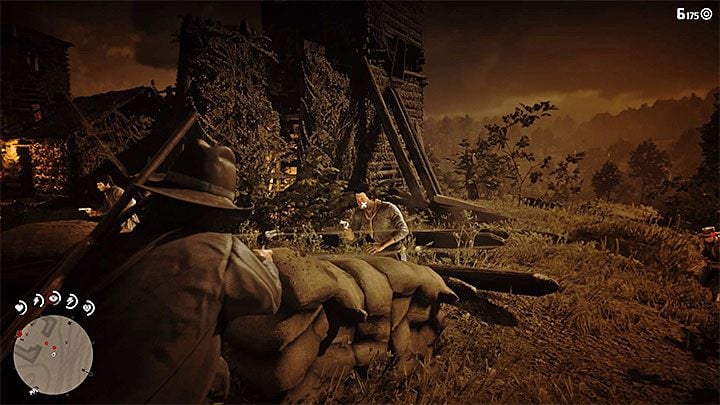 Energy bars are the first thing that gets depleted during an action:

The only purpose of a Core is that they can serve you as a spare bar. For example, Arthur doesn't have to die when the health bar gets depleted. When that happens, the game will start treating the Health Core as a new source of health points. Arthur dies when his Health Core is empty. The same goes for stamina and the Dead Eye Cores.

Remember that the Cores deplete over time, even when they aren't in use. Also, Cores can get depleted when:

Additional note - Cores don't deplete when you are in the gang hideout. Also, they deplete slower when you are riding on your horse. 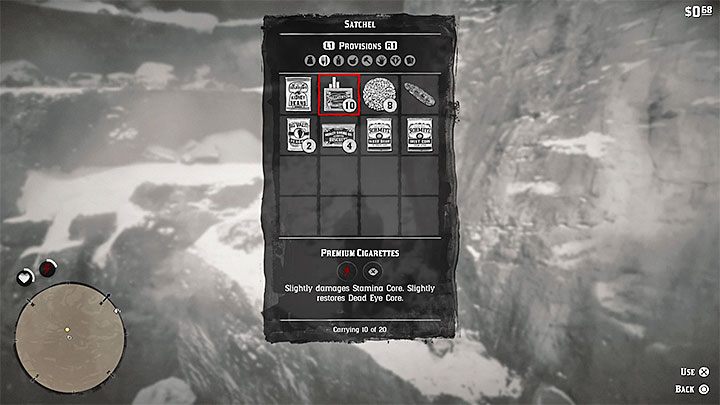 Bars and Cores can be regenerated. Some methods work for a few attributes while others work only on one of the three. Here is the list of the most important ways of regenerating bars and Cores:

Try to always search enemies and locations - you can find food, alcohol and tonics. Thanks to this method you will always have enough items for those attributes that interest you the most. Basic food products can be bought at stores for a cheap price, but tonics and more advanced medicaments can cost even a few dollars per unit. 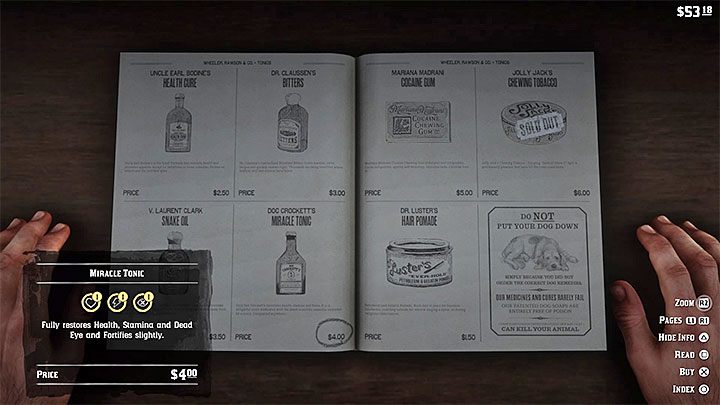 Regenerating an attribute isn't the only option in the game. You can also fortify them. Thanks to that you will protect yourself temporarily from depleting attributes. This isn't invisibility or an unlimited source of stamina, but you can use this method to make the game easier for you. Energy bars and Cores can be fortified by certain items found in the game or bought at the stores (the picture above shows one of the tonics). Save them for more challenging fights and missions.

Bars and Cores of your horse 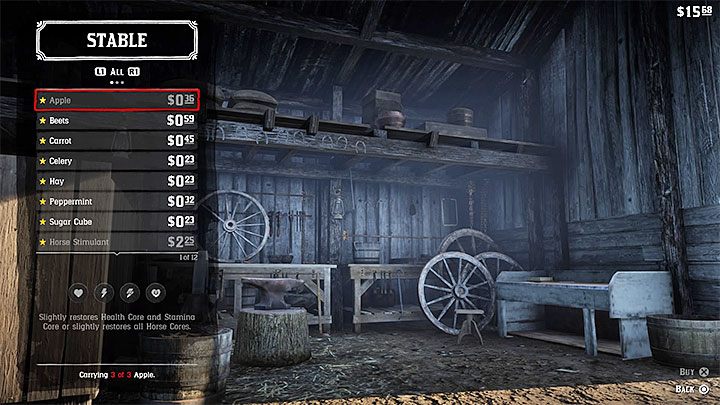 Every horse in the game has their own energy bars and Cores. Here, there are only Health and Stamina attributes. They deplete and regenerate in a similar way to how Arthur does that. Health bar depletes when the animal receives damage while Stamina depletes when, i.e. the horse is galloping for a longer period of time.

You can regenerate the horse's parameters by cleaning the animal (use your brush) and feeding. The game has a lot of various types of food that will regenerate bars and Cores. Some of them (i.e. apples) can also be consumed by Arthur, but there are items reserved only for your horse (i.e. hay). You can find them in the world or buy at a store (stables are the best source of these types of products).