On this page we've compiled Red Dead Redemption 2 side missions related to theft and robbery, which can be started by meeting members of the Dutch gang. Passing these missions is a good idea to get rich quickly.

Note - The quest markers for minor missions given to you by the members of the gang appear randomly. Check your map whenever you go back to the gang hideout. Try to take care of missions commissioned by other gang members right away. If you get promoted too quickly to the next chapters of the campaign, you may lose the chance to play them irretrievably. 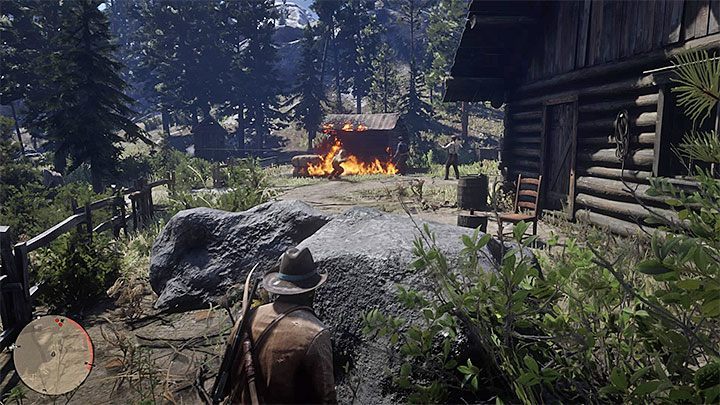 The mission marker can appear in the gang camp in the second chapter of the game, but you can also deal with it in the third chapter. Talk to Javier at the gang headquarters.

Go with Javier to a farm located north of Valentine. After approaching your destination, take your binoculars out of your inventory to carry out a reconnaissance. Head towards the buildings and hide behind the shed to overhear the conversation. Then hide behind a large rock and wait for Javier to set fire to the shed. Attack the inhabitants of the farm with surprise and start fighting. Observe the radar indications during the battle, as it is more difficult to see the people inside the buildings. 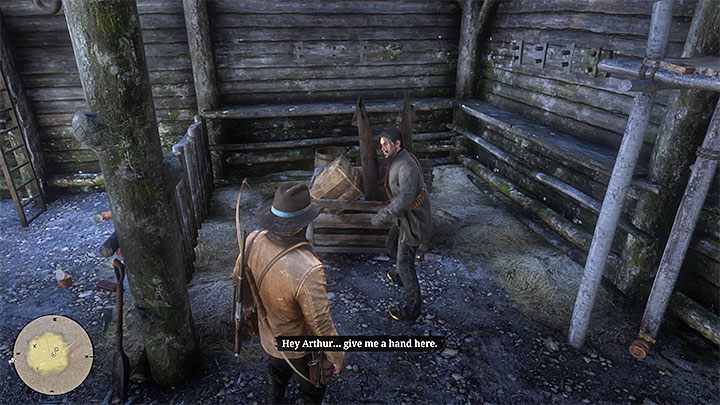 After winning the battle, go to the barn to find a hiding place. It is hidden in the place shown in the picture and contains a lot of cash. Arthur will get enriched by 175 dollars.

Do not leave the farm right away. It is a good idea to search it thoroughly and examine the corpses of all the shot inhabitants. On the farm you can find, among other things, two collector's cards. 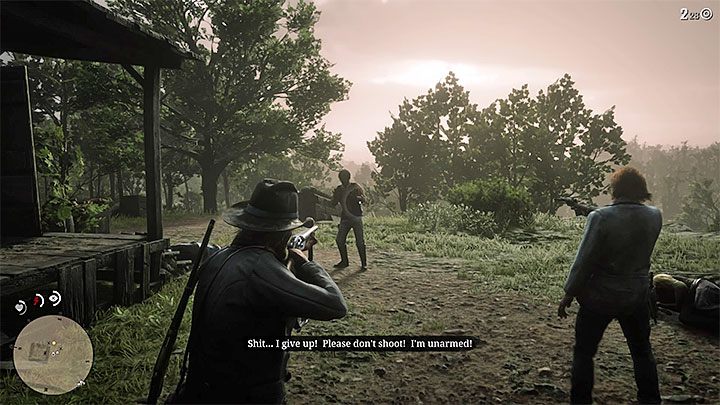 The mission marker can appear in the gang camp in the third chapter of the game. Talk to Sean. Complete this theft before you start the third chapter's final mission. Otherwise, you won't be able to do it.

After listening to the plan, go with Sean to a marked place - it's a small hut west of the Bluewater Marsh. Hide away and wait until Sean kills his first opponent. Join the battle and eliminate more enemies. But don't kill the last bandit, because you need to listen to him. You'll find out where the cache is located. 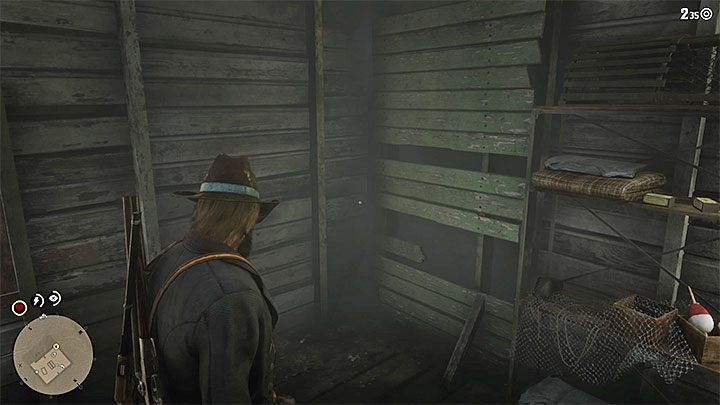 You can already enter the building. The most valuable finding is shown in the picture - the box is behind the boards. This is the corner to the left of the entrance to the building. You will find some cash. Once you've completed your mission, continue your search to find even more treasures (including money lying on the view, collector's card and Double-Action Revolver in a metal chest under the bed).

This quest marker can appear in the gang hideout during the third chapter. Speak with Bill. You will attack the coach in Dewberry Creek.

Reach the place marked by the game. The men start arguing. After that, you have to start chasing the coach. Use the Dead Eye to eliminate the driver and the guards. Stop the coach, wait for the dynamite to be planted, and detonate it by shooting the fuse from a safe distance. Loot the coach and then leave this place.

This quest marker can appear in the gang hideout during the third chapter. Speak with Sean. Complete this theft before you start the third chapter's final mission. Otherwise, you won't be able to do it. The coach will appear near Valentine.

The game allows you to prepare yourself for this robbery - hide behind the fallen tree. Mary-Beth stops the coach. Use this opportunity to surprise attack the enemies. Use the Dead Eye to make sure that your shots are accurate. One of the enemies can take Mary-Beth hostage. Use the Dead Eye to save her life. Loot the coach and then leave this place.