Ratchet & Clank guide contains a detailed walkthrough of the campaign, coupled with hints concerning the main and side objectives.

Additionally, here you can find descriptions of all of the weapons available in the game, their possible upgrades (both normal and unique), the effects of advancing every weapon to higher levels, as well as hints concerning the order the upgrades should be completed in. A list of gadgets, items required to fully explore the world of the game is also included, together with information about the location in which you can gather them, as well as how to properly use them.

What is more, there is a long list of tips which should help you with various problems you might encounter, together with descriptions of every key gameplay mechanic, such as combat and world exploration, understanding which is required to have a comfortable time with the game.

Our complete walkthrough will help you from start till the end of the game. We've described every planet and Ratchet and Clank ending.

The guide also contains information about the enemies and bosses you stumble upon during your journey, with their merits and flaws, and hints about dealing with them.

Ratchet and Clank Collectibles and secrets

For those of you wanting to fully explore the game, there are chapters about Gold Bots, Trespasser Puzzles, and Unique RYNO Holocards, all of which are the game secret collectibles. The final chapter of the guide contains a list of all of the trophies found in the game, coupled with hints on how to acquire them.

Ratchet & Clank is a conversion of a legendary series of platform games released for Playstation 4, which began in the prime time of Playstation 2. The title was developed by the American Insomniac Games, the creators of the original title. The game tells the story of two characters - the title Ratchet and Clank - and their journeys on various planets. The product demonstrates astonishing visual prowess, resembling a Pixar animated movie. 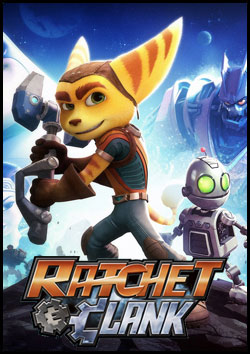 It has been nearly thirteen years since the release of the renowned platform game developed for the PlayStation 2 - Ratchet & Clank. Ratchet & Clank for PlayStation 4 is rebuilt from scratch when it comes to the technological aspects; however, the characteristic storyline and mechanics we came to know from the predecessors were remain mostly unchanged.

The players take part in the adventures of the foxlike Ratchet and his robot companion, Clank. We are able to experience their first encounter, which led to the creation of the inseparable duo and started the series of a number of Ratchet & Clank games. Our heroes are on a search for Capitan Qwark, a superhero, who is supposedly the last hope of the galaxy, and the only person who can stand against the evil Drek. When it comes to the gameplay itself, it is primarily focused around fighting enemies, maneuvering platforms and collecting various findings.