This page in our guide to Judgment includes a walkthrough of Chapter1: Three Blind Mice. 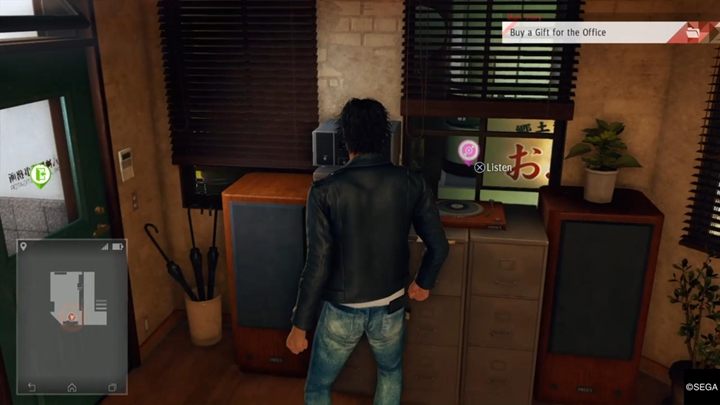 You start in Yagami's office. You can listen to music (which heals a hero), get some side missions, arrange the office or play pinball (available later in the game). Leave the room and go to the streets of Kamurocho. 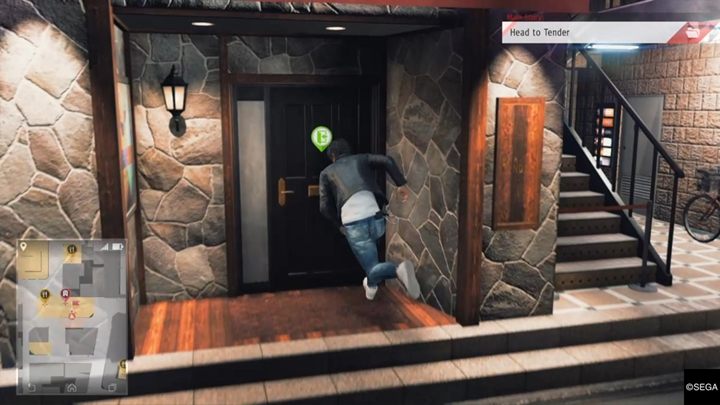 Go to the specified location. A few enemies will attack you - to defeat them. The next cut-scene will introduce one of the most important characters in the game - Kyohei Hamura, the captain of Matsugane Family. Go to Genda Law Office, a legal office where Yagami used to work. Talk to everyone and then go to the Tender bar. 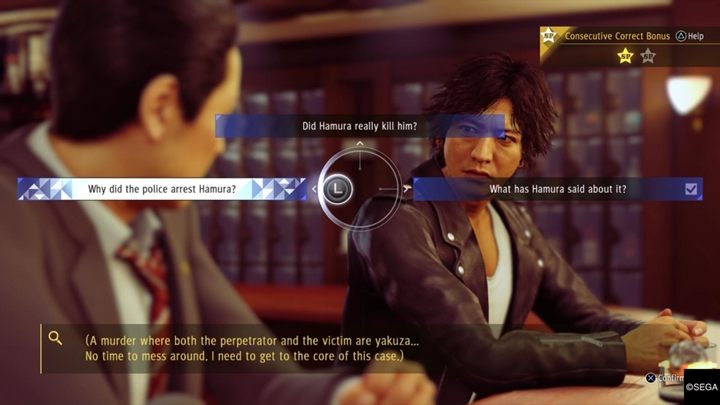 Time for a conversation - choose: "What has Hamura said about it" and "Why did the police arrest Hamura" to get a small SP bonus. Go to any of the taxis and move to Kamurocho PD Station. You are going to interrogate Hamura. Choose the following dialog lines: "About the Victim", "About the Alibi" and "Arguing with Kume" to get a bonus for the right choices. 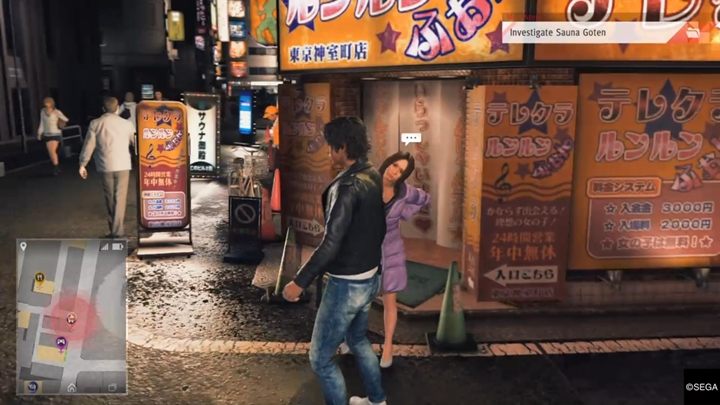 Go to the Goten Sauna. You have to interrogate people within the red area on the map - talk to people who have a dialogue sign above their heads. After that, go back to the Yagami Detective Agency. Lie down on the sofa to speed up the time - continue the investigation in the morning. 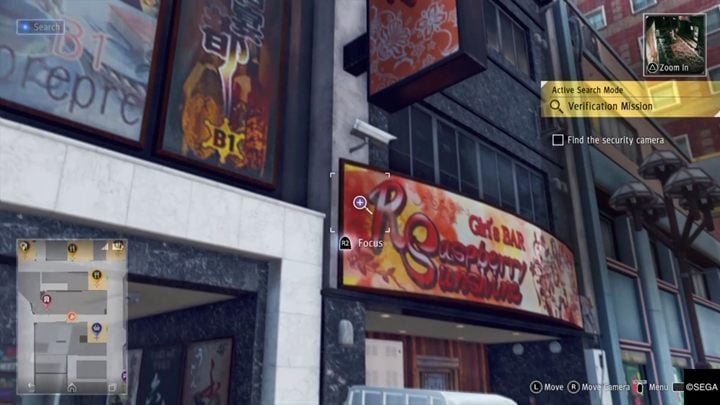 Go to Mijore Cafe and talk to the man about the details of the murder. After that, run to the Amour Club and start looking for the camera. The object is located above one of the bars. Talk to the employee, reach the back of the club and then go to the Mantai Internet Cafe. 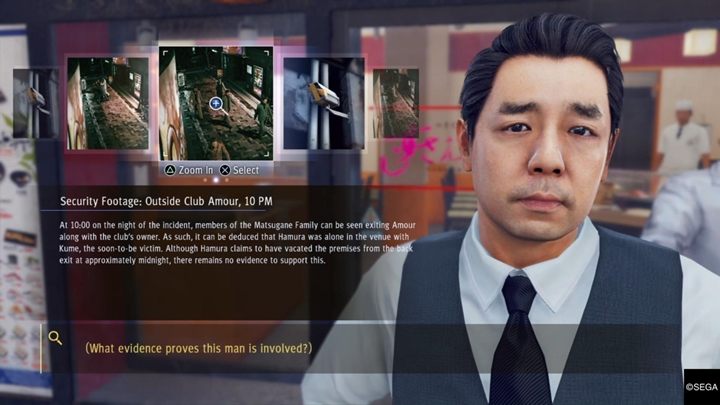 There, you will meet Tsukumo, one of Yagami's friends. The man will help you - go to the place pointed by him and talk to the man. Head to Sushi Place in Taihei Boulevard. Talk to the man and then select the proof - Security Footage: Outside Club Amour, 10 PM. When you enter the club, you will continue the conversation with the man. Select "About the Security Camera Out Back" and "About the Violence in the Club" to get the bonus. 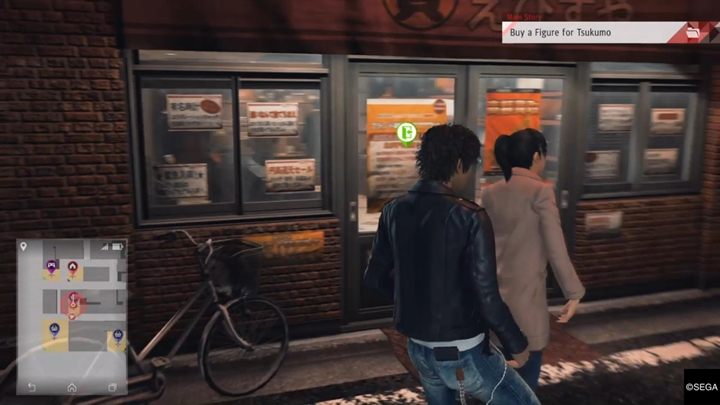 Get out of the Amour Club and run to the Yagami Detective Agency. After cut-scenes, chase Mayuyu. Then, read the message from Makoto Tsukumo. This activates the so called Friend Event - a side mission for this character. Friends are special NPCs with whom you can build a higher level of relationship, which leads to additional bonuses. Go to the specified location on the map and buy a figure for Tsukumo. 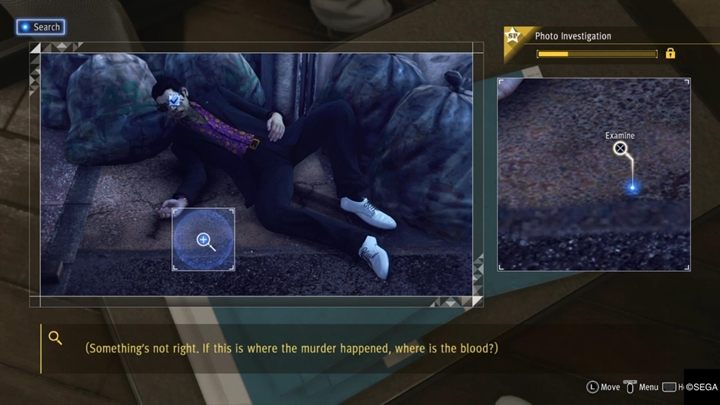 Take the figure to the man, and you will finish the mission. Your relationship with Tsukumo reaches the maximum level. You also unlock the option to meet and befriend other characters. Meet with Shintani and speak with that character. You need to investigate the photo and analyze the pose of the murdered person. Notice the victim's eyes, the lack of blood near the body, the bags with trash, and the right pocket. 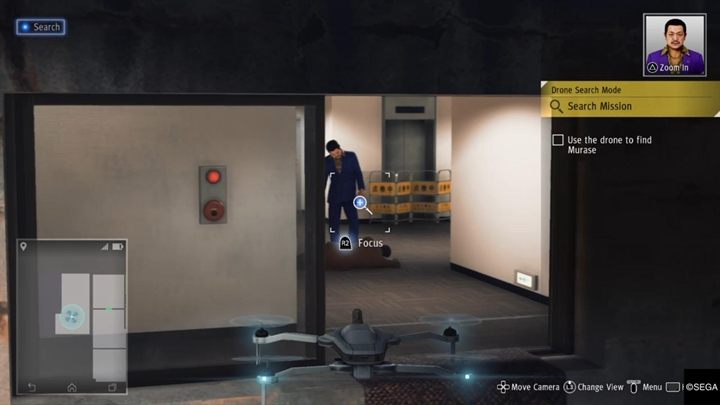 After that, run to the Matsugane Family Office and talk to the Patriarch of the family. Next, go to KJ Art. and reach the roof of the skyscraper. Talk to Kaito, select your drone and start piloting. Your task is to find Murase through one of the windows of the building. After that, you have to choose what to do next - choose Put on a Disguise. 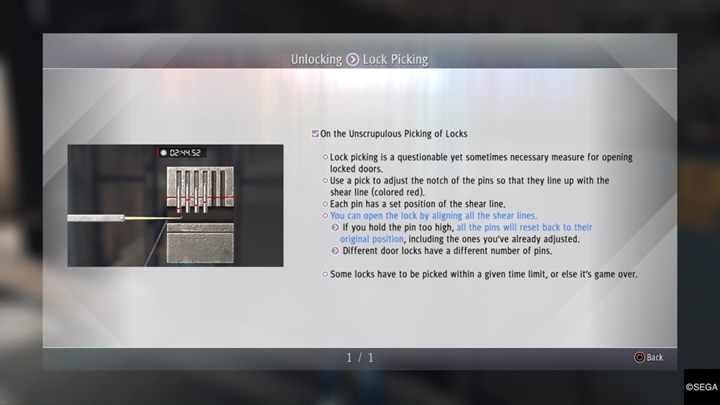 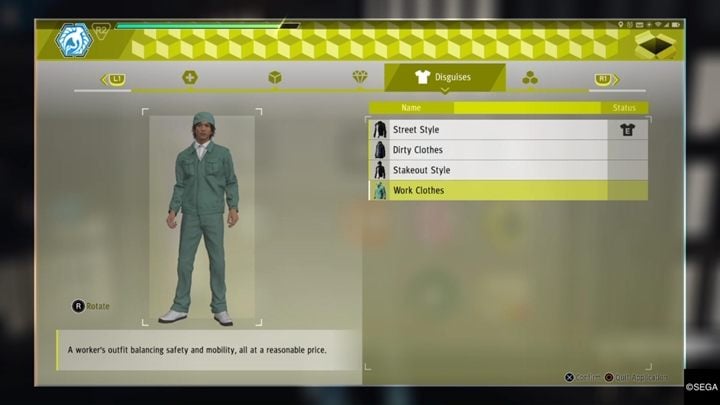 Go to the specified store and purchase Handyman Disguise. Go back to Kaito and choose the disguise. Go down and go through the front door. 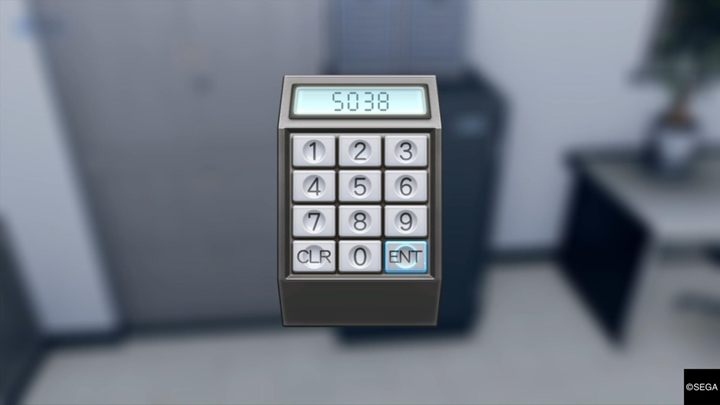 Talk to the receptionist and then go to the specified location. Start searching for the room - first, turn on the light near the door and collect blueprints from the desk. Now, you need to get the key - you will find it in the safe. Search all the notes on the board and look at all the written combinations - they will be useful later. Go to the safe and enter 5038. 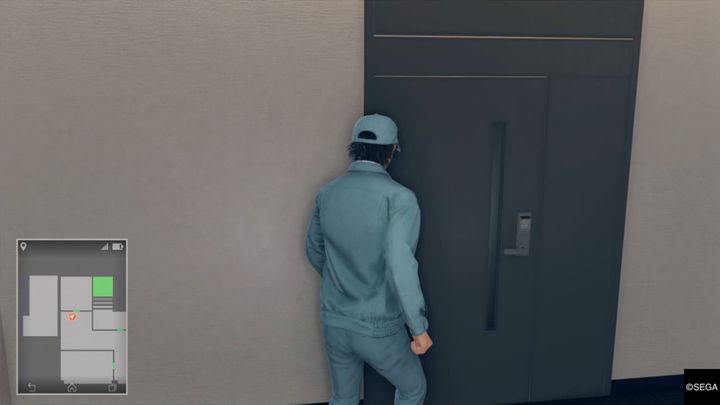 Go upstairs and help the gangsters with another malfunction. When you exit the office, you will get interrogated - select "I'm from different company..." to avoid detection. Go to the marker and use the key to unlock the passage. Move to the door presented in the picture above and enter 8919 to unlock the passage and Double Quickstep skill. 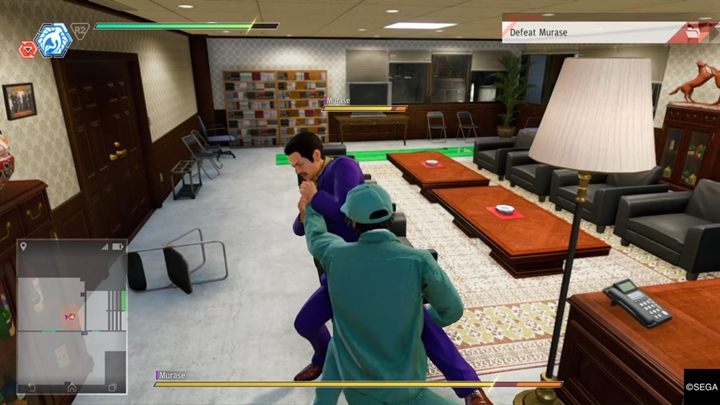 Go to the roof of the building - you will encounter enemies. Defeat the thugs and go down - you will encounter Akira Murase. Time to fight a mini-boss - defeat him, and then have a conversation. Choose Kume's Autopsy Report to convince him to let you go. Go to the Yagami Detective Agency and get some sleep. 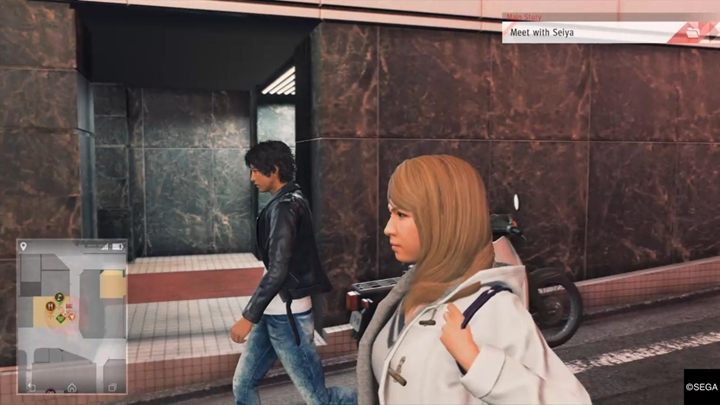 Head to Shintani and talk to the lawyers about the case. Run to the taxi and go to the Kamuro Police Station. After the cut-scenes, go to the Tender club and then to the Stardust club. During the phone conversation, select Date - several points will appear on your map. You will come across the right track. Go on a meeting with Seiya. 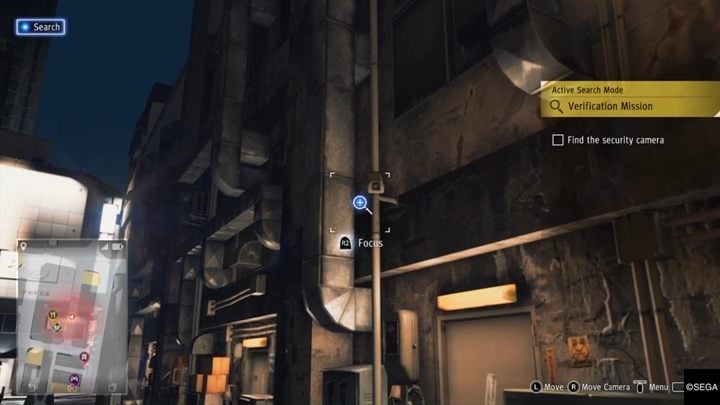 Now run to the specified location - you have to find the camera. Choose it, and after a while, Murase and numerous gangsters will appear. 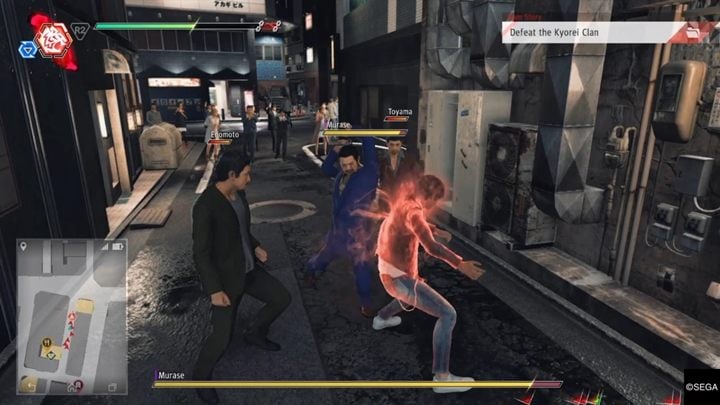 You have to defeat Murase and his thugs. The fight will not be easy because your opponent has a katana that deals a lot of damage. Watch out for his strikes, perform dodges and try to eliminate the minions in the first place. 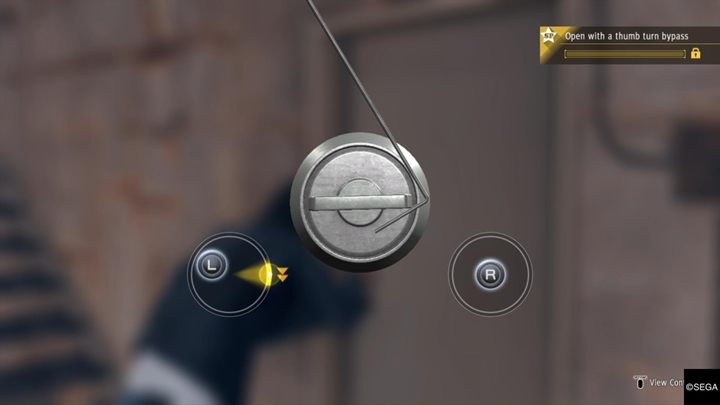 Watch the cut-scenes and then meet with Kaito. Approach the door and open the lock using lockpicking. Another door will have to be opened with a slightly different mini-game. Keep moving the analog sticks until they are in the highlighted area. 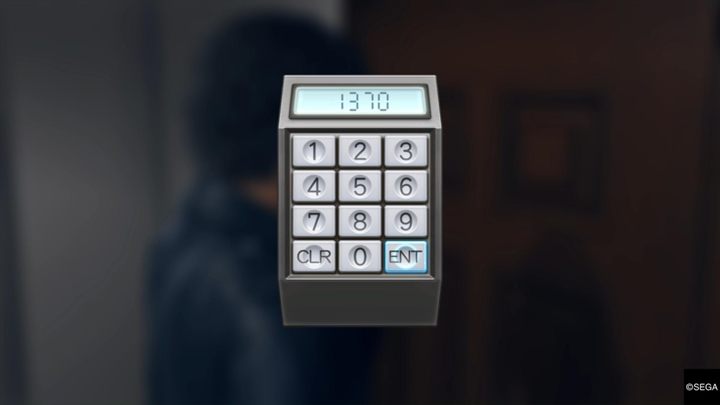 A lot of enemies will be standing in your way. Eventually, you will get to the wounded gangster - talk to him. Choose "Where's the girl" and "How many Kyorei members are there". Then, keep running until you reach the door protected with a code - enter 1370 and proceed forward.

Inside, you will fight with a fairly large group of enemies. After winning, you have to watch a few cut-scenes. This marks the end of Chapter 1.