See our guide to learn how to survive in Playerunknown's Battlegrounds: 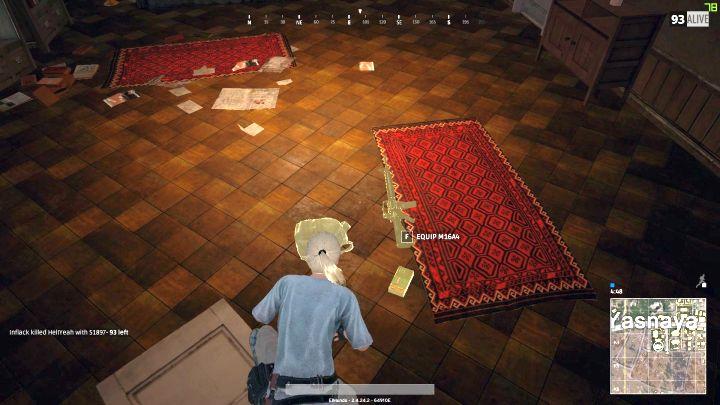 First seconds of the gameplay are crucial - get an assault rifle...

Surviving till the very end of a match, as one of the top ten players (not to mention winning the entire match as the last man standing) is the main objective. The longer you survive, (the more players die before you) the more points you shall receive at the end of the match - include bonuses for assassinations and teamwork. How to accomplish that? 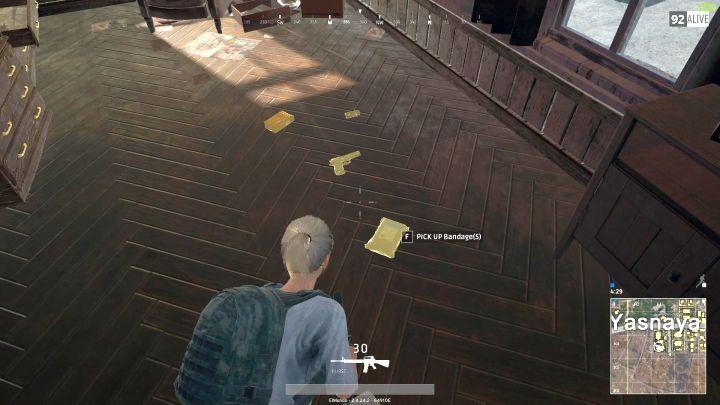 ... and some medicaments and a backpack.

First minutes of the game are the most important ones. You need to collect the necessary equipment as soon as possible - armor, a helmet, a backpack (with the highest possible level) and a long weapon. The best option is to combine an assault rifle and a sniper rifle - this will let you fight at any distance and eliminate opponents far away from you. Shotguns (if you are in a building) and machine guns (for close combat) are good secondary weapons. Unless, you lack ammo to your main guns, it's best not to use pistols at all. Specific information on the first minutes of the gameplay can be found in chapter "First minutes of the gameplay".

Once you obtain the necessary equipment, you need to reach the white zone presented on your map. Just keep in mind that there is no point of going to deep - it's best to stay near the boundaries, where you will not find too many enemies. When you get to the zone, try to locate other players and eliminate them as quickly as possible. If you don't have a clear shot, or your cover is not good enough, just forget about it - you may kill an enemy or two but other players will soon find you and eliminate you. It's wise to take cover all the time, and use surrounding hills, buildings, rocks or cars. Avoid trees - they provide cover from just one side and can limit your view. Bushes, located deep in the forest, are also a fine hideout - just hide inside and wait for an opponent to get close enough. On the other hand, avoid bushes located in the open field. 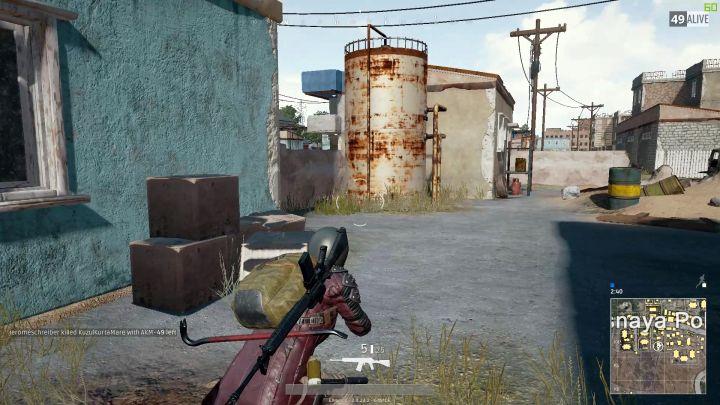 Shotguns and SMG are great in compounds.

Eliminate (or ignore) enemies and constantly monitor the zones. When there are 20-30 seconds left before the white zones shrinks, go inside, and stick to the edge of the zone. If you notice two enemies firing at each other, wait till one of them dies. It will be much easier to deal with the one that survived. 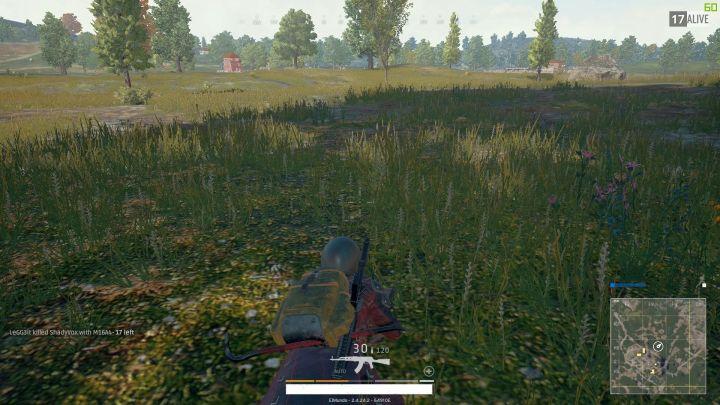 When the match is almost over, you should find a good spot and wait for other players.

When there are less than 10 players left and the fighting zone gets small enough, shoot at every person who comes into view. Why? The zone will be so small that it is almost certain that you will run into an enemy, or he will strike you first. First, try to find a place where you can take cover and fire safely at your targets. During the last minutes of the match, (when there are 3-5 players remaining) the battlefield will become so tiny that you need to constantly watch your back - other players will be located several dozen meters away, thus they can hide behind every bush, tree or rock. Make sure to check such places carefully before moving forward - leaving your cover for a brief moment can end tragically. At this point, grenades will become especially useful. Your hero should be able to throw them across the entire zone.

1. Don't use your grenades during the first minutes of the game, unless it's necessary. They will become very useful during the last stage of the game, as your character will be able to throw grenades across the entire zone.

2. When fighting in an open field, especially during the last couple of minutes of a match, one should move around while lying on the ground - it will be more difficult for your enemy to track you.

3. Leave your backpack, and keep your ammo, the weapon you are currently using and some medicaments (and boosters), and grenades. The reason is quite simple - when lying in the grass, it will be much harder to notice you if you don't have your backpack on you.

4. When there are only few players left on the battlefield, fire at everyone that comes into sight. A wounded enemy can quickly become the hunter and finish you off with an accurate shot.

5. Ignore items left by other players, especially when there are few enemies left, and the battlefield is very small - it's highly possible that fallen bodies are observed by other players. Ignore this rule if you run out of ammo. Without it, you won't survive anyway, so searching fallen bodies may be the only option.

6. Don't get frustrated if you don't win. Most players are unable to win even after dozens (or hundred) matches - luck and behavior of your opponents plays a major role. Just keep on trying and soon your character will be the last man standing.