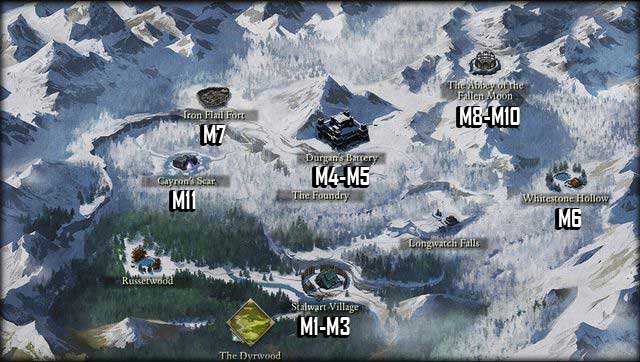 The White March offers a range of new locations and certain modifications to the ones that fans already know. Stalwart Village, the largest and the only village in The White March, has undergone the greatest modification of all the locations. Some attention was also devoted to Durgan's Battery. Some of the locations from the first part of the game, such as Russetwood or Longwatch Falls, remained intact. An extra location in The Dyrwood was added. The majority of encountered enemies will require a team at level 13-14 at least, but the selected difficulty level will have a major influence on the gameplay.

Stalwart Village (M1) - It is the only village in The White March, and it has significantly changed since your last visit. A new major has been elected, a new merchant can be found at the site of the burned house and several citizens have arrived. Most of them can give you a quest or two. One should notice that Stalwart Mines (2), which are a separate location, are located in the northwest part of the village. There, you will take part in a long and very interesting quest, which will lead you to another sub-location called Luminescent Cave (M3).

Durgan's Battery (M4) - This location has changed in terms of design, and you can see workers in front of the stronghold. The inside of Durgan's Battery (M5), has been changed significantly. Now, you can access the west tower.

Whitestone Hollow (M6) - A small location occupied by several groups of strong enemies. You will be able to accomplish some of the quests that you received in Stalwart Village.

Iron Flail Fort (M7) - The majority of the map was devoted to the fort swarmed with enemies. You will not be able to avoid most of the battles, so prepare yourself before you enter this location.

The Abbey of the Fallen Moon (M8) - One of the most important locations available. Although, it does not add anything special on its own, it leads to two crucial locations - Halls of Presence (M9) and Halls of Silence (M10). You will not encounter too many strong opponents. This location will become available automatically when you complete The Iron Flail.

Caryon's Scar (M11) - Although, the final location of the second expansion is not that big, you will encounter powerful enemies all the time. Thus, you should reach at least level 15 before exploring Caryon's Scar. The location will be automatically added to your map once you finish The Rising Tide. 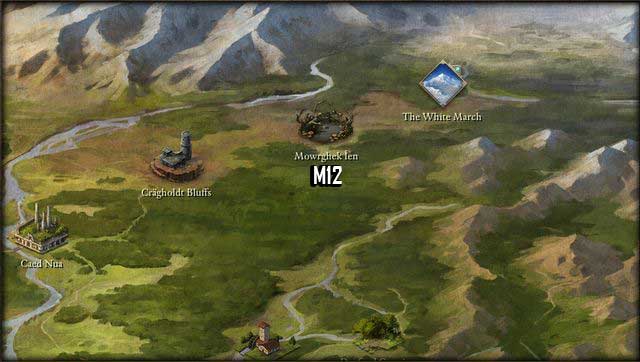 Mowrghek Ien (M12) - The only new location that is situated in The Dyrwood. It will become available to you once you accept The Phylactery's Promise. Here you will complete two side quests and take part in dozens of battles, some of which will be the hardest in the game.