Update: This guide is perfectly compatible with PC, PS4 and XONE versions of the game. It is also compatible with new Pillars of Eternity: Complete Edition for PS4 and XONE. Controls have been updated to better understand new UI designed for consoles.

This guide for Pillars of Eternity offers a full set of information that help grasp the key elements of this expansive role playing game, and helps explore the fantasy world offered by the game. This guide has been divided into two main parts. The first part is the guide to the game and it provides the description of all the key elements of the game. The main purpose of this part is to prepare you for experiencing the game, and to complement the information provided in the manual.

Walkthroughs of the individual quests provide information on the circumstances in which you receive them, the locations that you visit, while completing them, as well as all the possible ways to complete them. Descriptions of locations list their key features - their landmarks, NPCs, quests that can be received there, and types of monsters residing there. The walkthrough has been enriched with the world map and several dozens of maps of all the major locations.

The first chapter of the guide encompasses general hints and tips, that you should follow throughout the game. Also, it includes basic information on the character creation and development process. A big portion of the text focuses on the analysis of all the available character classes: brief characteristics of each, further steps to take in the process of creation and development at the initial stages of the game, as well as practical information concerning playing style. The guide also presents the game world alongside with suggestions concerning world exploration.

This guide also encompasses issues connected with combat and it focuses on explaining the key terms and mechanics implemented. It also includes information on part management, from accepting new party members, to commanding them. This same chapter introduces all 8 companions, who you can meet while playing, and accept into the party. The last major chapter has been devoted to the description of the keep managed by you. It describes the way to seize it, the way to manage it, as well as shows the recommended direction of development. Finally, it presents the basic mechanics of the crafting system. The second part of this guide comprises of a comprehensive walkthrough for all the quests in the game and detailed descriptions of the locations that you visit.

The maps provide you with information on quest-specific areas, but also of the whereabouts of important NPCs, locked passages, traps or dens of strong monsters. Pillars of Eternity is a game developed by Obsidian Entertainment, it has been created with the support from the Kickstarter platform and it is heavy with references to such classics of the genre as Baldur's Gate or Icewind Dale. In the game, you get to explore a vast world that has been presented in the top-down view, complete interesting quests meet interesting NPCs and fight demanding battles.

This guide has been color-coded in the following manner:

The White March Part I 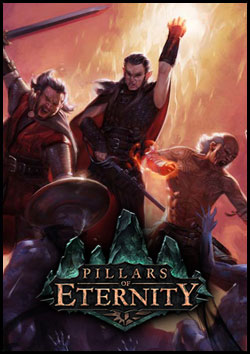 Pillars of Eternity is a role-playing game created by Obsidian Entertainment. The player controls the actions of a hero traversing a vast, fantastical world alongside a team of independent characters. The game was created with the financial support gathered through the Kickstarter platform. The creators of Baldur’s Gate, Icewind Dale and Fallout, among others, were involved in the production process.
Project Eternity is the first completely independent game from Obsidian Entertainment. The developers decided to use the experience gained in Black Isle Studios and create a role-playing game combining the best features of the genre classics such as Baldur's Gate, Icewind Dale, Planescape Torment, and Fallout. Among the developers are Tim Cain (Fallout, Arcanum, Temple of Elemental Evil), Josh Sawyer (Icewind Dale and Icewind Dale II, Fallout: New Vegas), Scott Everts (Fallout, Planescape: Torment, Icewind Dale, Icewind Dale II, Fallout: New Vegas), Brian Menze (Planescape: Torment), and Dan Spitzley (Planescape: Torment).

More About Pillars of Eternity

During the Digital Dragons conference, we interviewed Feargus Urquhart , the CEO of Obsidian Entertainment. He revealed that the company is working on Pillars of Eternity II and an unannounced game on Unreal Engine with Tim Cain and Leonard Boyarsky.