The White March Part II expansion pack for the Pillars of Eternity adds new story plots to the White March map you should be familiar with. The events shown on the expansion takes place few weeks after clearing the Durgan's Battery, so there aren't many connections between the quests of the first and second part of the expansion. Some of the locations (like Stalwart Village and Durgan's Battery) changes slightly, but most of the quests takes place in newly added locations.

Information about the fact that you have completed the story of the first part of the White March expansion pack.

In order to unlock access to the second part of the expansion pack you must have bought the basic version of the game and the White March Part I. After completing the main story of the game (reclaiming the White Forge) you should receive information about how to start the second part of the expansion. In order to do it, you must get back to the Dyrwood and rest in any location. You can either sleep in an inn, in your fortress or use the camping materials. It shouldn't make any difference. If the information doesn't want to appear, then check if you definitely completed all the quests of the main storyline of the first part. If yes, then try completing few quests in the Dyrwood, this might trigger the information to appear. 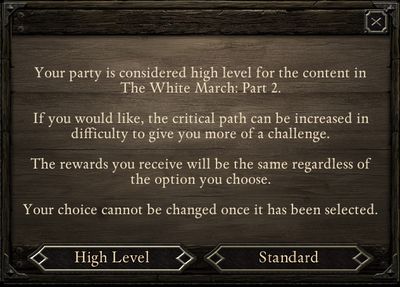 You can increase the difficulty level of future battles without having to change anything in the options menu.

At the same time The Forgotten Army quest will start. Continuing it will start the new part of the expansion. At some point you will be also able to decide whether you want to increase the difficulty level of future battles. You should do it when you have fully improved party and you want to face some challenges.