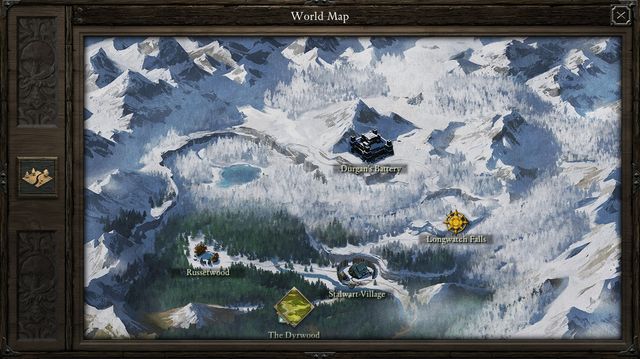 The game world of The White March expansion to the Pillars of Eternity was divided into two main sections. The first, as well as the largest and most important one is a completely separate map, to which you will gain access. There are several smaller and bigger location in here, in which you will be able to complete a number of main and about 15 side quests. Key locations in the White March are:

Stalwart Village (M1) - The biggest, as well as the only settlement in the White March. Most of the side quests available in the expansion starts here as well. Unfortunately, there's only a single merchant located in the village, meaning that you will have a very limited access to supplies. During your first entrance to the settlement, it's attacked by a clan of ogres - it's generally a good idea to advance your party to at least 7th or 8th level before entering it.

Russetwood (M2) - It's located to the West of Stalwart Village. A few stronger enemies, such as ogres and ice trolls can be found here. A number of side quests can be completed in Russetwood, provided that you accepted them beforehand in the village. In the North-Western section of the map there's an entrance to two secondary locations - Flames-That-Whisper upper Cavern (M5) and Flames-That-Whisper Lower Cavern (M6). In order to be able to fight the enemies encountered here on equal terms, your party should be at least at 10th or 11th level.

Longwatch Falls (M3) - A rather small, but filled with enemies location to the East of Stalwart Village. Enemies are quite strong here, and are found in large groups. If you don't want to fear for your life all the time, you should come here with at least 11th or 12th level of your party.

Durgan's Battery (M4) - It's the most important location of The White March expansion to the game, as the entrance to the dwarven stronghold can be found right here. Enemies are equally strong as those found in the Russetwood, but the packs are less numerous. Unfortunately, you will meet a lot stronger enemies in the battery itself, so it's generally a good idea to venture then only when your party is of 12th level at least. In the North-Eastern section of the location, in a small hut, there's an entrance to two secondary locations - Galvino's Cabin (M7) and Galvino's Workshop (M8). Three additional secondary locations, The Great Hall (M9), The Mines (M10) and The Foundry (M11) are located in the North-Western section of the map. 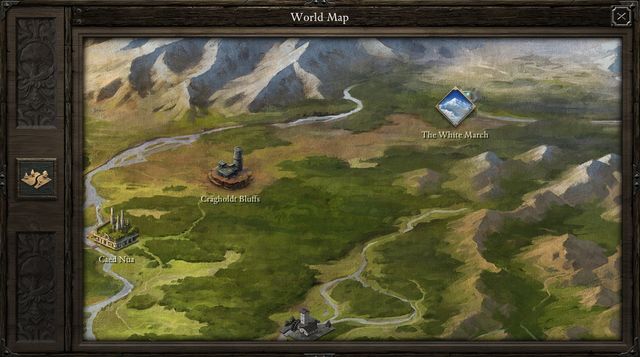 The White March expansion adds one more location, to the North-East of the Caed Nua stronghold - Crägholdt Bluffs (M12). It's a location in which you will meet the strongest enemies found in the game, so before venturing there you should advance your whole party to at least 13th or even 14th level. In the North-Eastern section of the map, there's an entrance to the secondary location, Crägholdt (M13), where you can find an immensely powerful mage called Concelhaut.