Similarly to The recluse of the White March quest, you receive this task during the conversation with Renengilda (M1,7), the mayor of Stalwart village. The village is frequently attacked by ogres and you will be tasked with getting rid of that problem. The ogre clan is led by female ogre called Beregan. You will have to kill her or convince her to stop the attacks. At the same time you will obtain the equipment left after previous, unsuccessful expeditions to the Durgan's battery.

First you should visit the Russetwood. Go to its northwestern part and find the entrance to the Flames-That-Whisper Upper Cavern. It is protected by few ogres but you shouldn't have trouble dealing with them. Once you enter the cave, you must somehow reach the Scrying chamber (M5,2) - the place where Beregan can be found. You can do it in two ways:

Once you enter the room and walk towards Beregan, the conversation will start. You shouldn't have trouble avoiding battle. Depending on the dialogue options you pick, Resolve on 12 level or Intellect on 13 level might be required. She will give you the items that were left after previous expeditions to Durgan's battery, including the most important one - Battery relief tile. The quest will successfully end. 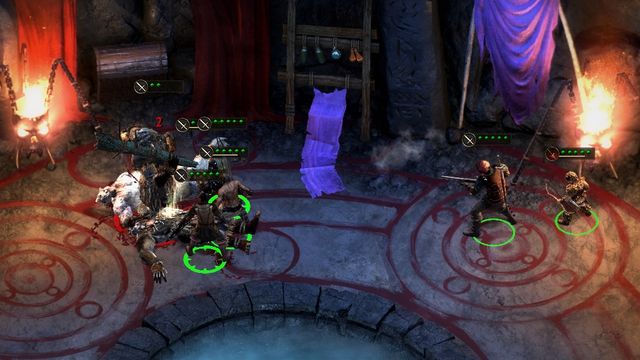 If you decide to fight, try to block the enemies so that they won't have access to your ranged fighters.

During the conversation with Beregan you can also provoke a battle. The fight will be quite challenging, as the Matron is much stronger than common ogres and she will be backed up by few other enemies. Try to position your team just when you reach the stairs, before the battle starts, so that your mages won't lock your warriors on the narrow passage. After a won battle take all the items from the bodies of your enemies. The quest will be completed. However, don't forget to loot the chest in the upper part of the room. There are many valuable items, but you will need 10 lockpicking level to open it.