The quest will be added automatically to your journal after receiving the message from the Steward. The only requirement is having The White March Part I expansion pack to Pillars of Eternity installed. The message can appear at two different times. If you continue the game with a high level character, it will happen immediately after loading the game. If you're starting the game from the beginning, it will happen after completing the Never Far from the Queen main quest. 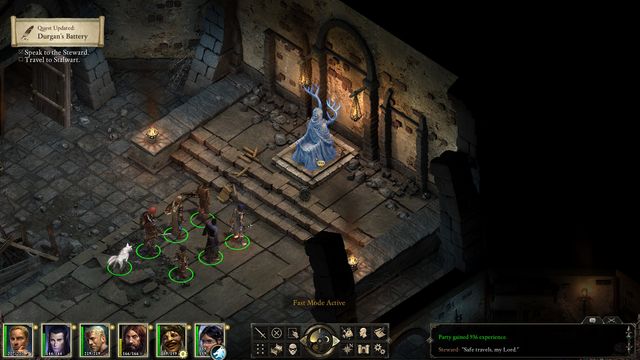 By talking to the Steward you will learn what the citizens of Stalwart village are up to.

Your first task will be to go to Caed Nua and talk with the Steward. You will have to help the citizens of some village on the North in finding the Durgan's battery - a closed since ages dwarf fortress hiding the secret of creating very valuable steel. 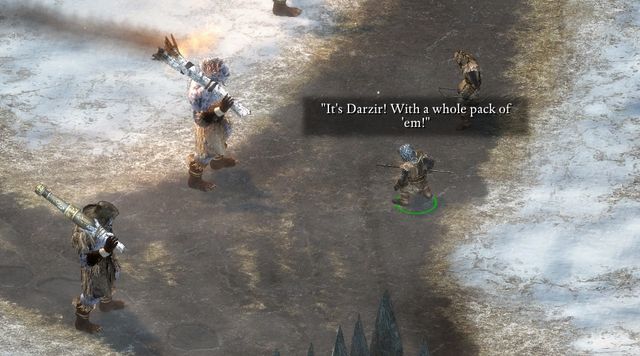 You will reach the Stalwart village at a bad time - during the attack of a nearby ogre clan.

Get to the new map through the world map (the icon can be found in the upper right corner of the location select screen) and go to the Stalwart village (M1). The situation will be complicated since the very beginning as the village will be attacked by an ogre clan. You and your team will have to deal with the enemies and thus help the villagers. The best solution will be to keep going to the West of the location. You will face 3-4 ogre groups on the way, but you shouldn't have trouble with eliminating them as long as you have a team on 8-9 level. At the crossroads to the West of the village you will find ogre woman named Darzir. Fighting her will be more challenging. In the first phase of the battle you should deal with her helpers, especially the ones attacking from a distance. Then, attack Darzir herself. Remember that during the battle you should keep watching out for your mages and shooters and control the health level of all your party members. Once you defeat the enemies, they will start retreating. One of the villagers will run towards you and thank you for the help. Your reputation in the village will increase. You will be asked to go to the main building in the village. Don't forget about looting the bodies of fallen enemies. You will find, among other things, the Ring of Changing Heart that adds +3 to resolve and adds an additional Dominate skill. The latter allows you to take control of the enemy for 10 seconds twice before having to rest.

Now go to Renengild's house and talk to the owner. She will tell you a short story of the village and will give you details about your task. You must go to Durgan's battery and find the White forge. It gives the ability to create special steel and is needed by the villagers to restore the old prosperity to their home. 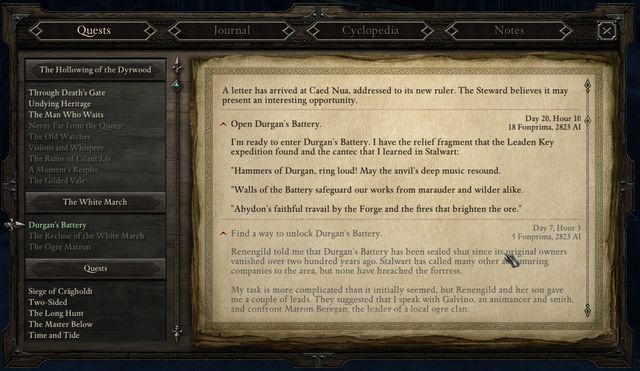 In order to open the door to Durgan's Battery, you have to use the previously learned incantation.

You have to find a way to get inside the stronghold. Before you can accomplish this, however, you must complete two separate quests: The Ogre Matron and The Recluse of the White March. After doing so, approach the stronghold's door (M4,9) and do the following: 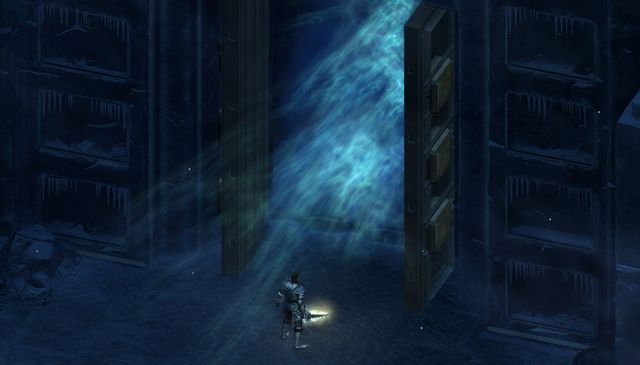 Before entering the battery, stock up on potions and Camp Supplies.

The passage will be unlocked, and you will be able to get inside. As soon as you do, the quest will be finished and a succeeding one will be automatically added: The White Forge.