This quest appears in your journal automatically after you have jumped into The Pit on the Burial Isle (M56,1). Your task is to find and square off against Thaos.

Your first step should be to go to the room with the column of adra, kill all of the opponents there and talking to Iovara. You learn many interesting facts about your past. Then, go to the second level of the ruins (M59,3). It is completely dark here and, to illuminate the path, you need to proceed onwards.

This location is completely linear so, you simply need to keep to the path. Occasionally, you will watch a cutscene of the illumination of another part of the map, after which you will have to defeat several opponents. In the final room, you find the door to the third level of Breith Eaman (M59,7).

The third level comprises a long, winding catwalk, with circular platforms on it. On each one, there will appear a ghost of Thaos and he will speak to you. You can completely ignore that. Go to the main platform (M59,8). There, talk to Thaos, but the fight is inevitable. Two big statues will be animated - the Woedica's Judge and the Woedica's Headsman . 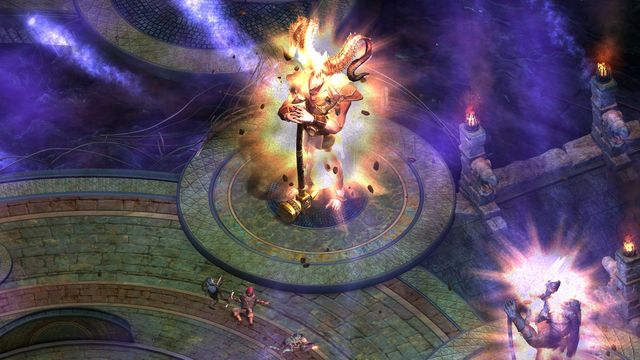 First of all, attack Thaos. As soon as his health drops to a half, he transfers his soul to either the Judge or the Headsman. It is on that statue that you should focus all of your attacks now. However, you should kill, in the first place, the statue that has not been possessed by Thaos's soul. Thanks to this, you will not be bothered by this one, later during the main battle. After you defeat the statue with Thaos's soul, he returns to his body and regains his health. Again, focus all of your attacks on him, to kill him as quickly as possible. You should, predominantly, watch out for all of his AoE attacks. The best tactic here is to put each of the character in a different part of the arena.

After you defeat Thaos, you will be able to decide what to do with his soul. There is only a plotline significance to this choice. Approach the machine now (M59,9) and decide what happens to the collected souls. The only thing that it affects is the ending.

Congratulations! You have just completed the Pillars of Eternity. Unfortunately, after you see the summary, you cannot continue your gameplay.